Bugbear Entertainment knows a thing or two about cars crashing into one another. As the studio behind the FlatOut franchise, they’ve shown they can create a driving game that melds crazy excitement with solid handling.

Ridge Racer is a series best known for slick arcade racing rather than over-the-top crashes, making Bugbear seem like an odd developer choice. Can the Finnish studio help Ridge Racer move into a new direction, or is Ridge Racer Unbounded heading up a dead alley at dangerously fast speeds?

If it wasn’t immediately obvious at the start, let me make this clear: Ridge Racer Unbounded is not a typical Ridge Racer game. Bugbear Entertainment’s title is much more focused on combining a variety of racing modes along with encouraging players to destroy as much as possible around them, be it the environment, buildings, or even rival racers. While Ridge Racer Unbound can be exciting, the combination of racing and wrecking never really combines into something truly compelling.

You play as a recent inductee into the “Unbounded,” a group of street racing miscreants who aim to shake up the population of Shatter Bay with their illegal street races — and by driving through coffee shops and malls while listening to dubstep. The story is nothing you should be paying attention to. Suffice it to say, you’re going to be racing through each of the city’s nine districts, competing in a variety of events in a bid to unlock faster and tougher cars. 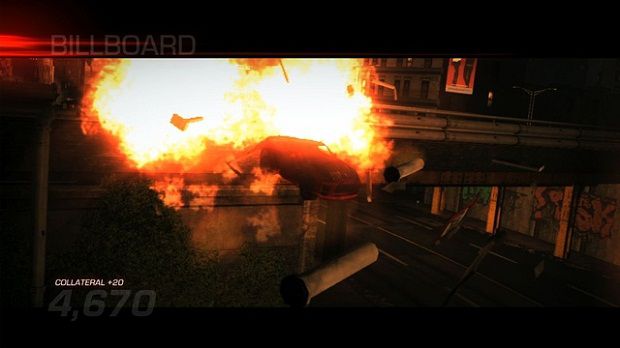 Breaking it down, each district is divided up into seven individual events, such as straightforward races or more specialized events like time trials, drifting challenges, and elimination events. Each event has a three-tiered reward, depending on whether you come in 1st, 2nd or 3rd place in a regular race or finish a time trial under par time. Completing these events will earn you experience points, which is then used to unlock cars and assets for use within a surprisingly good map editor. You’ll have to perform well to unlock the next races in the district and once you’ve completed all events, you’ll have dominated the area.

Unfortunately, Ridge Racer Unbounded shoots itself in the foot right from the start due to its level design. Although racing through the city streets while the sun is setting does look beautiful, the lighting makes driving much harder than it needs to be, especially compared to the wider roads and clear daylight of later districts. Put another way: have you ever driven through the city center, blinded by the sun setting as you pass between tall buildings? Imagine that, but driving at 130 mph.

Aside from winning events, the other main way to gain XP is by scoring “collateral” which is gained during any event for actions like crashing through objects, concrete barriers, trees, and even large buildings. You’ll also get collateral from wrecking your opponents’ cars (called “Fragging”), and when this happens, you’re treated to a slow-mo crash sequence where your opponent’s car is flipped through the air. During this time, the control of your car is taken away from you, so it’s actually a handy way to get through some tricky sections of the game.

At the center of all of this is Power, which is gained from things like drifting, causing collateral damage, and getting your car airborne. Filling the Power gauge lets you use it as a nitro-esque boost, which, if you aim correctly, will allow you to smash into your opponents’ cars for an instant frag. The other main use for Power is taking advantage of the many shortcuts you can find in each level. If your Power gauge is full, you’ll get a flashing prompt on-screen that lets you know a building can be crashed into, creating a shortcut straight through it. Again, it’s accompanied by a camera shot that takes control away from you, which can be annoying, as once you regain control, you’re headed for an unbreakable part of the scenery and a crash, losing any advantage you might have gained from taking the shortcut in the first place.

The other main problem is realizing what can and cannot be smashed into: regular logic goes out of the window here as concrete pillars, low walls, and event stairways leading up to elevated train lines can all be smashed into but low walls with yellow and black markings can’t. Although repeating events will help you learn what you can’t drive through, it’s still really hard to make those calls driving at full speed in a busy race. Shortcuts are also a bit of a misnomer as even though creating them is really exciting, there were far too many times that I felt my race position was never improved by blasting through a building.

The event you’ll be playing most is probably Domination, a twelve-car race where you’re encouraged to frag your opponents and find shortcuts. These races are tough as you start in the second-to-last position and it’s a real challenge to even get close to the leaders of the pack. It’s hard to build up Power and it’s really discouraging to see your rivals just use their Power boost to race out in front of you, especially if there are no corners to drift around to fill up your Power gauge. The other annoyance with the Power boost is fragging; as I mentioned before, it’s great for taking down other racers for some points but in reality it doesn’t offer you much of an advantage. Your opponents will always respawn and do so fairly quickly, meaning aggressively fragging other racers will give you some well-needed experience points but won’t necessarily aid you in the race. In fact, I’ve seen racers in front of me wreck, hit their burned out car, and not move up a single spot in the race because they respawned seemingly straight away and still in front of me.

It’s doubly frustrating to bring yourself so close to a rival, only for them to engage their Power boost and insta-frag you. A frag seems to only be a minor setback for the AI racers but a big crash for you can easily set you back five or six places in a busy race. The AI drivers are definitely antagonistic and will take opportunities to frag you, meaning the races develop a real cutthroat vibe to them as you try and screw your opponent before he screws you. The other annoyance about the frag system is that, unlike your opponent’s vehicles, your own car doesn’t have any indicator to show its health, aside from some purely cosmetic damage to the car and a single “Damage Critical” warning that flashes on screen. This just compounds the quickness and the frequency of being fragged by opponents with frags coming from totally out of the blue.

The straightforward Shindo races are more enjoyable as there’s less emphasis on shortcuts and fragging your opponents — it’s just straightforward pedal to the floor racing. Drifting events will either be great fun or a nightmare depending on your choice of car and how well you get to grips with the drifting mechanics. Time Trial offers a lot more fun, as you’re often racing a pure stunt course with no attempts at upholding the realistic city environment; it’s mostly huge ramps and half pipes and it’s all the better for that. Frag Attack is a basic elimination test but your Power gauge fills up at a much higher rate in this mode that it’s just a matter of aiming at a vehicle and pressing the A button to mash into your opponents.

Racing itself in Ridge Racer Unbounded is fairly standard and uncomplicated, depending on what car you chose for your event (there are separate classes of vehicle for Domination, Drifting, and so on); there’s a real, tangible difference to the cars. 4WD vehicles hug the road much better than a 2WD or a RWD car, but as a result, you’re less likely to drift and fill up the Power gauge. It’s also worth keeping in mind your car’s strength value — it can make a big difference in how often you’re fragged by opposing racers. 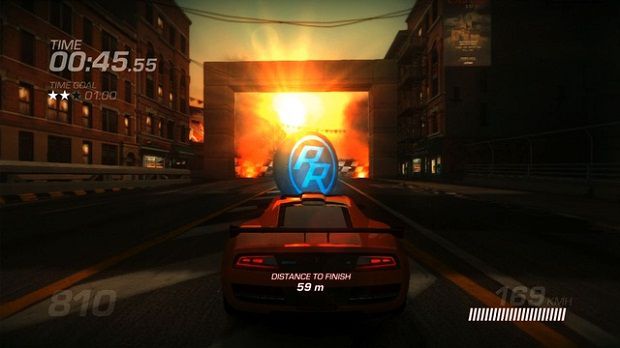 Multiplayer offers different modes based on the basic races. Playing with AI racers does negate some of the frustration of the aggressive AI opponents and there’s a level of strategy needed as the other human players will create shortcuts, which you can also use, whereas the AI drivers will use shortcuts but never actually create them. The more interesting part of the multiplayer comes from Ridge Racer Unbounded’s excellent track editor. As you would expect, it’s a tile-based editor that makes creating a simple track layout super easy. Extra themed tile sets are unlocked in the single-player campaign and even in its first weekend, I was finding some really inventive courses being made online. It’s intuitive to create your own city, with a variety of events and courses. The multiplayer suite also offers hourly and daily challenges to compete in (only against the AI), where your objective is to gain enough XP to beat the track creator’s score.

However, this is where an unscrupulous player can exploit the game; I played a randomly allocated track that had more explosions than 15 minutes of a Michael Bay film but also included a series of ramps that confused the AI racers and meant I finished in first place by a big margin. Wanting to test out if this was a fluke, I raced the same track three more times with the same result and with the reward of me going up a level. Whilst I don’t think there should be restrictions on what maps users come up with, it’s easy to see this feature being abused for easy XP boosts and rapid leveling.

Ridge Racer Unbounded simply doesn’t manage to make all its separate elements gel together. In the straight Domination races, it feels like the best strategy is to play it like a regular race and ignore the destructible shortcuts and fragging opponents. Then again, it’s also easy enough to just ignore racing your opponents altogether and find yourself gaining a lot of XP simply by causing environmental damage and gaining other awards, instead of finishing races first. Due to the tough difficulty of the early districts, I found myself at almost level 20 (out of 30) before leaving the second of nine total districts in Shutter Bay. With such level progression possible, it leaves the question of why you would want to see the rest of the game. The multiplayer maps have shown there’s some lovely looking track layouts later in the game, but the motivation to see them simply isn’t there.

What Ridge Racer Unbounded does right is high-thrills racing and crazy action — like smashing through a municipal building only to boost off an elevated train track that then leads you into a truck filled with explosives. It is unfortunate that the rest of the game doesn’t support this grand spectacle. As a result,  it’s hard for me to recommend Ridge Racer Unbounded to racing game fans when the still excellent Need For Speed: Hot Pursuit is available.