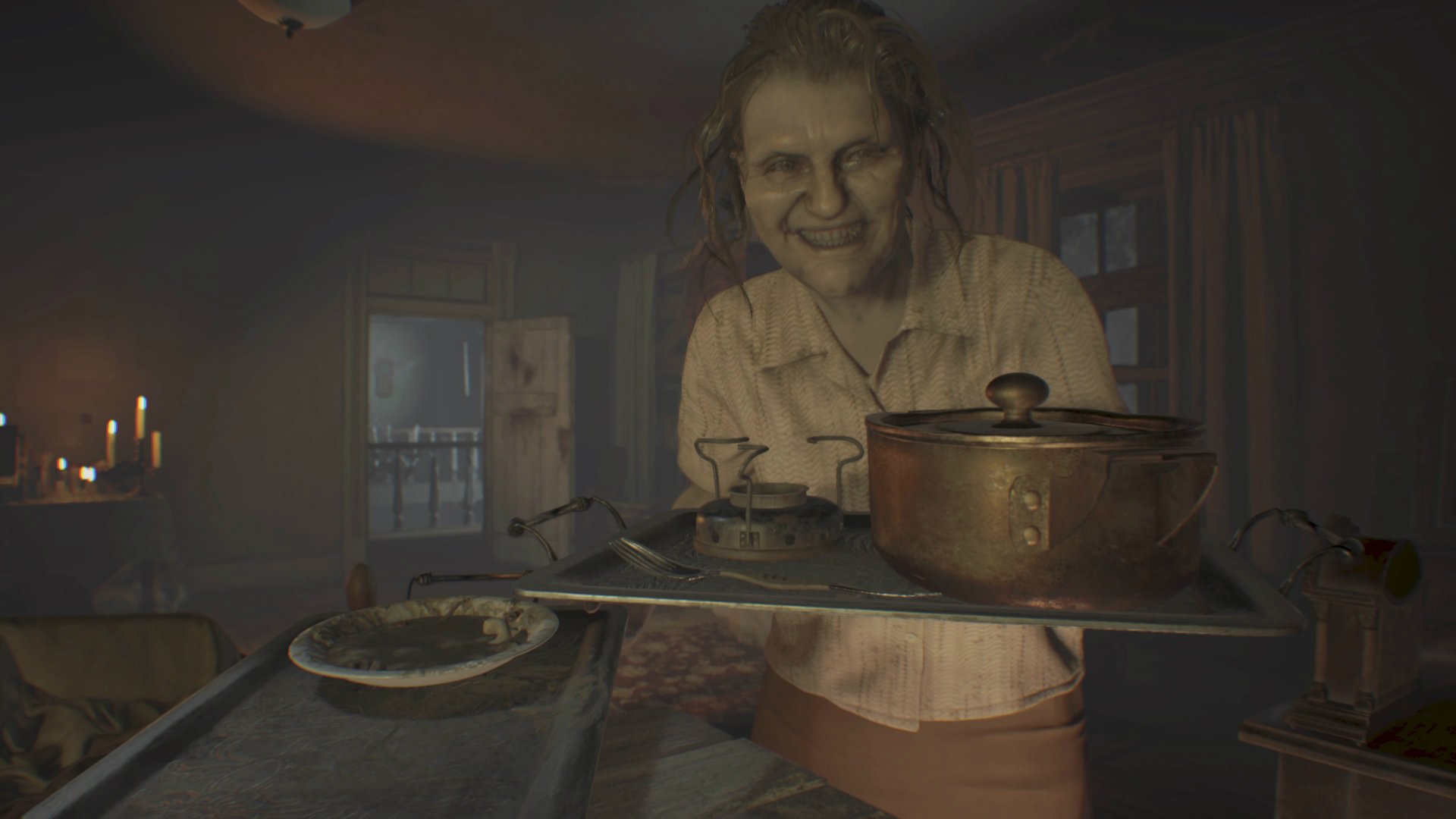 It hasn’t even been a month since I reviewed Resident Evil 7, a game that I thought was solidly okay (that’s a joke, I’m the jerk who gave it a 10), and a big ol’ chunk of DLC came out last week. It’s called Banned Footage: Volume 1 and is part of the $29.99 season pass, but can also be purchased separately for $9.99. You’ll get two new videotapes — the fun framing device from the game proper that allows you to see past events — and a new, masochistic mode called Ethan Must Die.

Whether these additions are worth it to you or not depends on what you enjoyed about Resident Evil 7. I’d advise against reading further unless you’ve finished the full game. 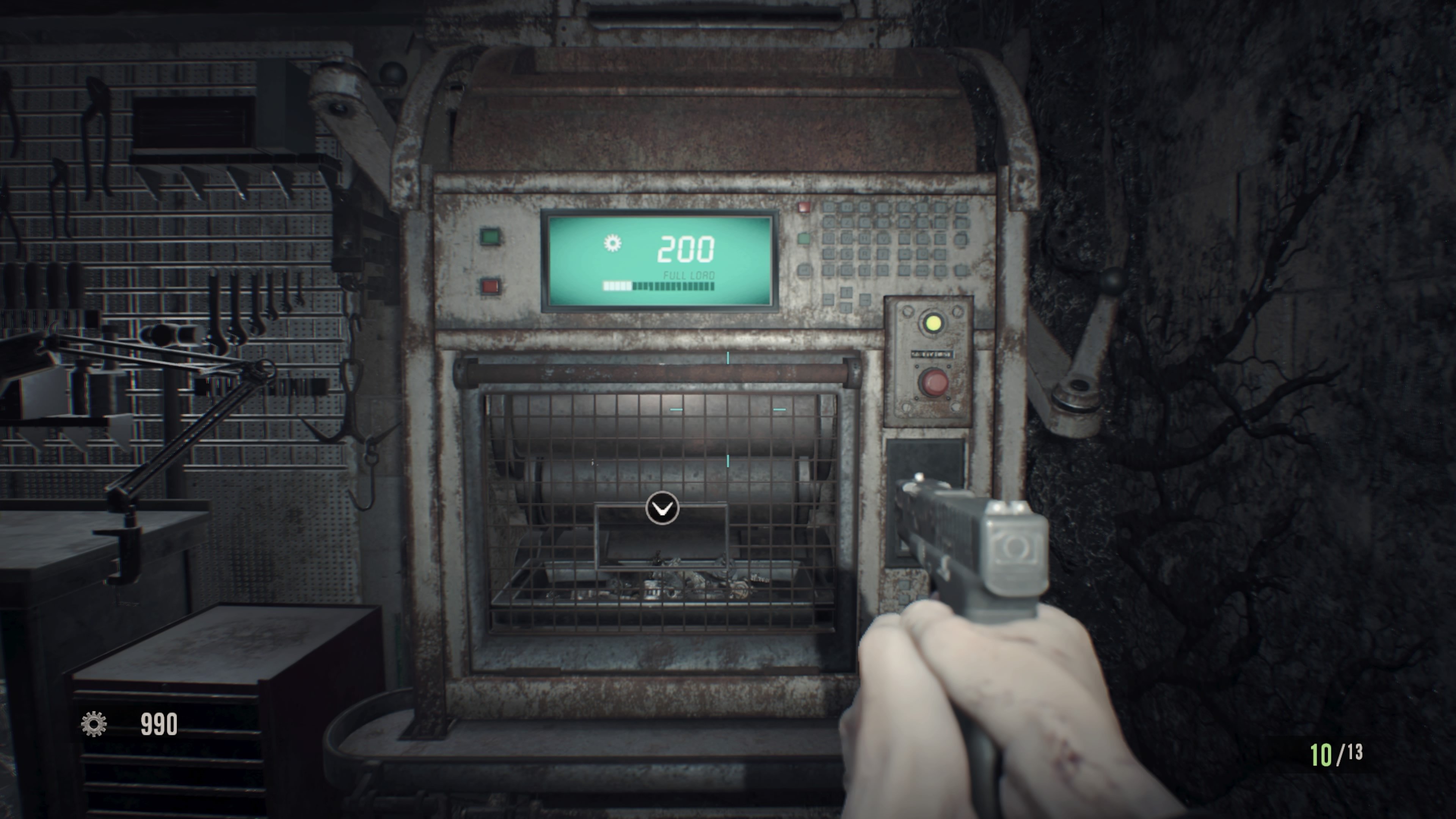 Let’s start with my favorite part of this DLC: the videotapes. I’m a big fan of this narrative device in Resident Evil 7 to start with, since it allows you to see what other characters had to go through and are much more effective than a text or audio log. In both of the new tapes, you’ll play as Clancy Javis, the poor cameraman that we played as in both the Derelict House footage and the Saw-like Happy Birthday footage. As we see here, though we know his ultimate fate, it was even more nightmarish and involved than previously thought.

In the new Bedroom tape, Clancy is strapped down to a bed and Marguerite has locked him in a bedroom to eat some tasty human…goulash? Stew? Are goulashes and stews the same thing? Could I have Googled this to get my answer?

Bedroom plays out like a real-life Escape Room. As soon as Marguerite leaves to lock the door, it’s time to try to find your way out. Almost the entire 30-ish minute scenario unfolds in this room, with layers upon layers of puzzles to solve that are never nail-bitingly tough but still led to me exclaiming “A-ha!” with the little Tomb Raider chime playing in my head. What really makes this tense is that certain steps of the puzzles elicit loud-as-hell noises that make Marguerite storm back up the stairs to check on you. A timer pops up on the screen telling you how long you have until she arrives, so you have to make each part of the room look like you haven’t touched it. It’s a fun little memory exercise with lethal ramifications, like Marge puking a giant centipede down your throat. Be careful now!

Like the Happy Birthday tape and a couple of the boss fights from the full game, this mode feels delightfully Kojima-esque in a weird way to me. There’s some outside-the-box thinking involved, and having Marge inspect the room after she suspects you’ve been foolin’ around has that Metal Gear Solid cat-and-mouse appeal. My only criticisms are that it’s a bit short and you probably won’t play it more than once (though having friends try it in VR has been a hoot in the last few days), and that I think it’d be more terrifying if that timer didn’t appear. Knowing she’s coming is enough, and the timer gamifies it in an unnecessary way. 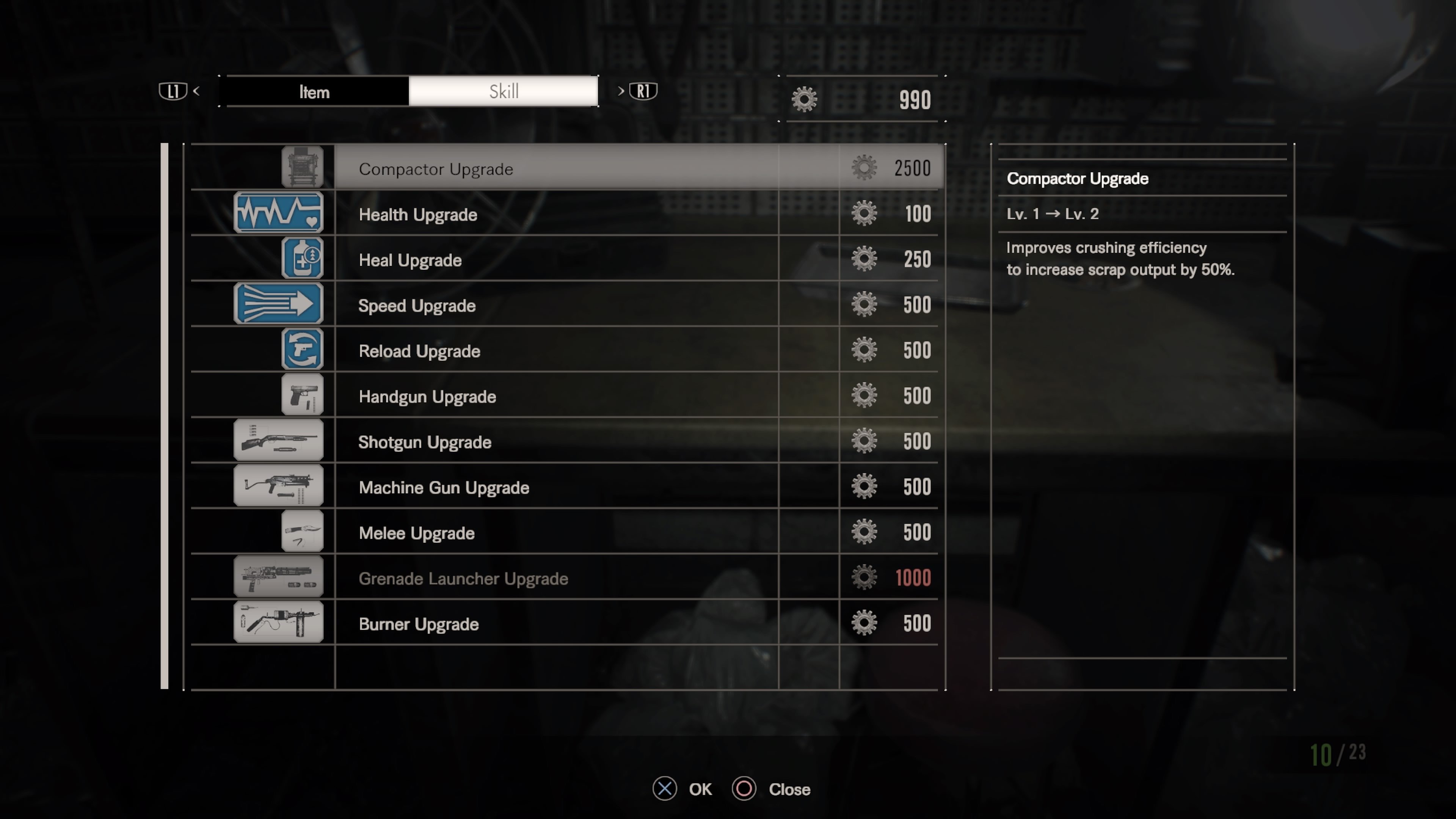 The next new tape is Nightmare, and it’s definitely my favorite of the bunch. Clancy’s been trapped in the basement, and he has to survive until dawn (read: multiple waves of enemies). Instead of just being about scrounging for ammo and weapons like in the rest of the game, here you’re given a certain amount of scrap to start with and you can use a generator to keep grinding up metal for you. Using that scrap you can buy weapons, ammo, health, or upgrade your guns and some stats, like health recovery amount and reload speed. In a particularly devious move, ammo costs more each time you purchase it, incentivizing the use of multiple weapons. You can’t just pump all of your scrap into buying one gun you like and sticking with it, so you have to be strategic with which weapons you want to burn through first.

As the waves progress, you’ll fight harder waves of enemies, including Regular-Ass Jack and Chainsaw-Scissor-Ass-Jack. To help mitigate the incoming monsters, you can set up turrets and trip mines in pre-ordained locations. If you manage to get enough scrap, you can buy a corrosive agent that opens up other doors, widening the playing field and giving you more generators for a higher scrap upkeep. This leads to more and more chaos, since movement is encouraged if you want to stockpile that sweet, sweet scrap.

After surviving until dawn, you earn a score that goes towards unlockables, like more weapons to buy at the workbench, more starting health, and new traps to use such as flaming barrels and nerve gas panels. It’s surprisingly robust, and I’ve already played through it numerous times. There’s a harder mode called Night Terror, and it’s rough but doable. I enjoy this mode so much that I hope Capcom releases more maps for it, even though the Basement is probably the best area that could have been pulled from the full game.

So the tapes are great! I’m not as much of a fan of Ethan Must Die. This mode is for the self-flaggelators out there who enjoy lashing themselves. Ethan starts outside the house armed with only a knife and the sky is blood red. The ultimate goal is to get the greenhouse key from inside the main house, go to the greenhouse, and kill Marguerite. The house is remixed in a linear path teeming with Molded, and almost everything kills you in one hit.

From that description alone, this sounds like a game type I would love. The problem is that it’s too random. Enemy placement is always the same, but items are randomized in crates strewn about with stars above them demarcating their value. You have to cross your fingers to their breaking point in hopes of getting weapons sometimes. I’ve gone halfway through Ethan Must Die without finding a single weapon (oh look, I have five herbs, too bad almost everything one-shots me!), and had other runs where I had four guns within the first two minutes. Oh, and you drop all but one thing every time you die, which can be reclaimed by hitting a statue where you last bit the bullet. This alone is enough to make it feel less skill-based than I would have liked. 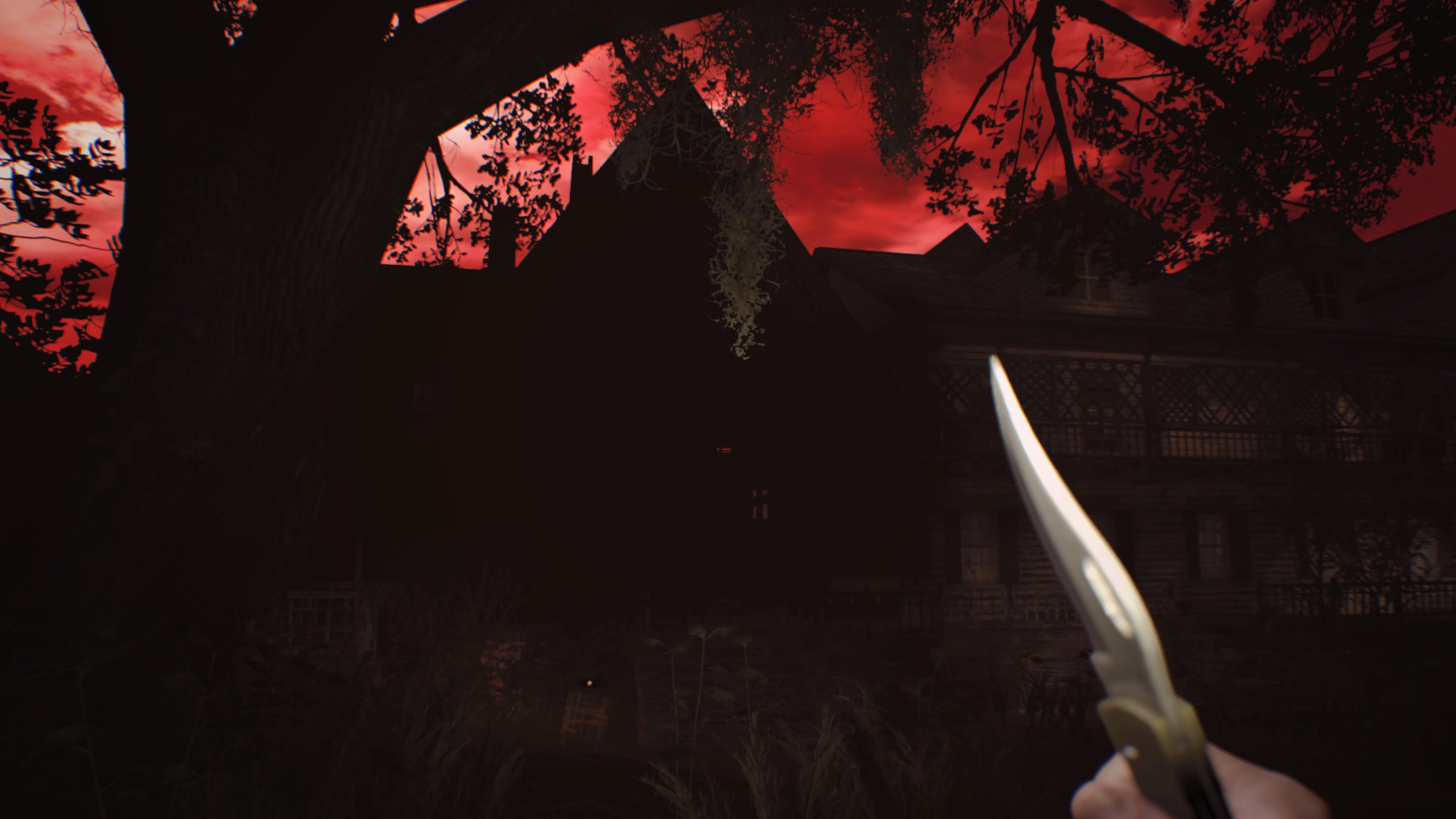 Like, I get it! The joke is that Ethan Must Die (seriously, starting the mode triggers Ethan’s death scream), and die he indeed does do, definitely. But the mansion is rife with one-hit kill traps, and that humor has diminishing returns each time you have to pray to RNGesus for a decent weapon while getting back to the little bit of progress you’ve made. I’m sure I need to git gud, but games like Dark Souls, which I’ve repeatedly heard this mode compared to, are predicated more on player skill than on lucky item drops. I will admit that this mode fostered a fierce determination in me that kept pushing me forward, but the main thought ricocheting in my braincage throughout was “fuuuuuck this.”

The icing on the bloody cake is that there’s no reward for finishing the mode. There’s a Trophy and the satisfaction of having…gotten lucky, I guess? Gimme a damn rocket launcher, Capcom. Let me go hogwild with some silly weapon, since I patiently learned where all of your frustrating traps are and didn’t let Ethan die (beyond the first hundred times, of course). Also keep in mind that this is the only piece of the DLC that can’t be played in VR.

All-in-all, Banned Footage Volume 1 is an interesting little package. You get a tense puzzle-focused escape room, a fun-as-heck action mode that I’m sure I’ll be playing in the coming months, and a bastard-hard masochist-a-thon for those who want that. While I’m not a huge fan of Ethan Must Die, there’ll be people out there who dig it, and those two tapes continue aspects of Resident Evil 7 that I’m hungry for. I hope Volume 2 has a similar value, and that the upcoming free DLC Not a Hero answers some burning questions I have from the game’s ending.