As far as games worthy of a remaster go, Red Faction: Guerilla is a prime candidate. The game didn’t sell abysmally, but it never got the attention it so rightfully deserved in 2009. Released at a time where hype for upcoming sequels was at a fever pitch, Guerrilla was brushed aside by the gaming masses for bearing the name of a decent-ish series. That was a crying shame because Guerrilla was one of the best open-world games of the last generation.

While this remaster gives the title a second chance at success, I wish I could say the port was up to snuff. Sadly, Red Faction Guerrilla: Re-Mars-tered is a pretty sub-standard re-release. 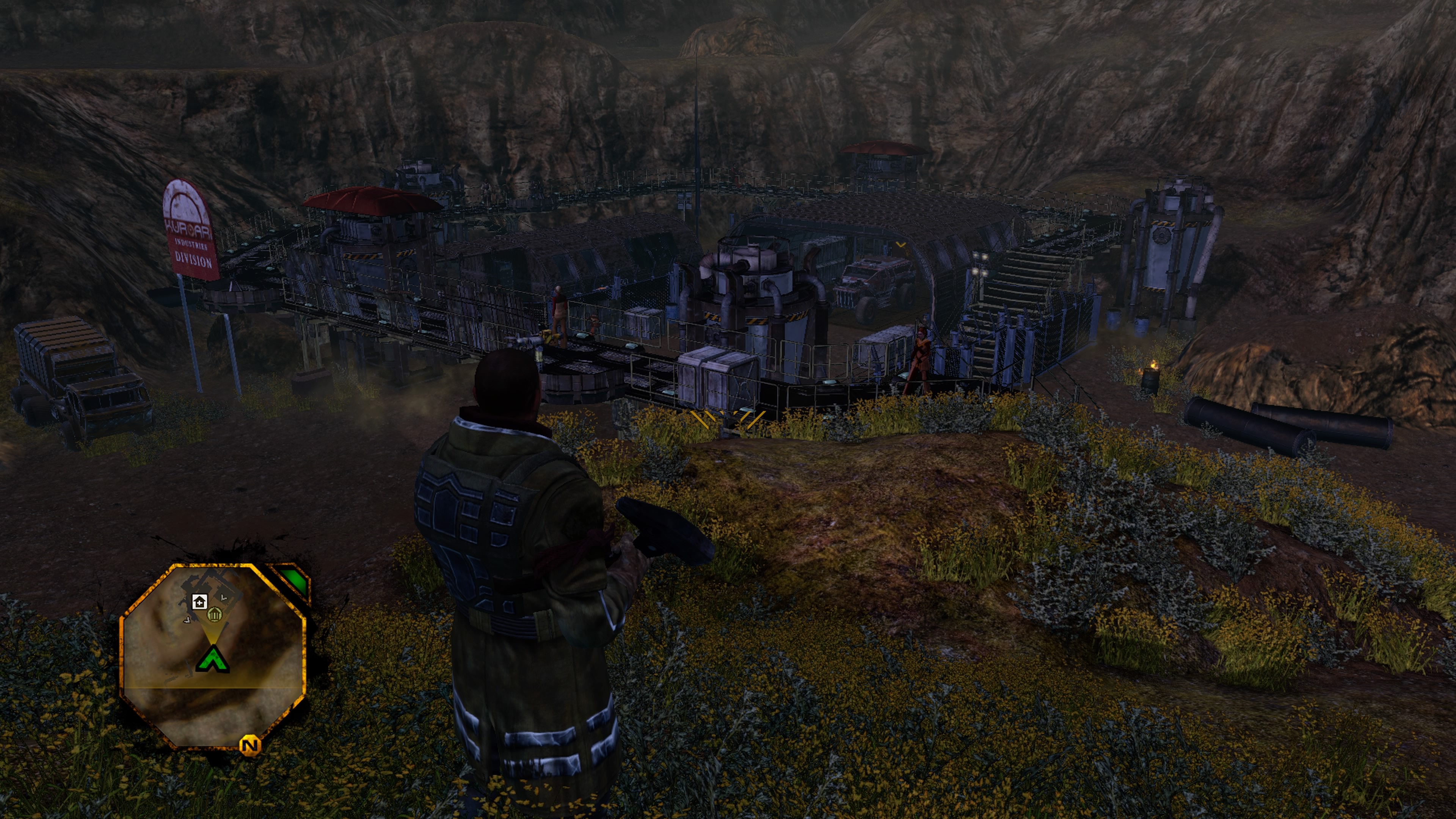 The story of Red Faction: Guerrilla is set 50 years after the first game in the series. You assume the role of Alec Mason, a man traveling to Mars to reunite with his brother and start a new life. Within minutes of arriving, your brother is attacked by the Earth Defense Force (EDF) and killed for being a conspirator with the Red Faction. The Red Faction is a ragtag group of insurgents that are fighting against the EDF’s control of Mars with the hopes of one day reclaiming the planet. Since Alec is a miner and has a predilection for destroying buildings with various tools, he joins up with the Red Faction to fight the good fight and avenge his brother.

While there are nods to the first game strewn about, Guerrilla requires basically no knowledge of prior events. The one thing that truly links the games together is the use of Volition’s patented “Geomod” technology. In the original, Geomod allowed you to blast through literally everything and create your own path through the environment. Due to the limitations of seventh generation consoles, Volition had to drop the ability to destroy terrain. In return, we were given some seriously hardcore destructible buildings.

I’m still in awe of how the Xbox 360 and PS3 even managed to run Guerrilla with how many pieces of debris can go flying at a moment’s notice. Take one swing with your hammer and dust will kick into the air, stone will crumble and pieces will collapse from the point of impact in a very realistic display of destruction. There is an unadulterated joy in just getting frustrated with trying to shoot an enemy and opting to take the whole damn building down instead.

For a decent chunk of the campaign, this destructibility is actually factored in quite well. Since the Red Faction is (essentially) a terrorist organization, you’re often tasked with causing mass havoc to the EDF by destroying everything they operate with. This means taking your sledgehammer and doing your best M.C. Hammer impersonation or chucking a few remote bombs and setting them off. Missions will send you all around Mars with the goal being to destroy all the EDF’s armories, bring down fuel depots and obliterating vehicle factories.

It is in the missions that try to further develop the story where Guerrilla completely deflates itself. Sometimes the game will throw you into scenarios where you’ll have to directly confront enemies and the gunplay is just not up to snuff. The very odd control scheme can make aiming feel imprecise and the nigh on suicidal NPC AI makes firefights frustrating. The real killer is just the overall lackluster presentation.

I can excuse the low-quality FMVs as being a product of their time, but the way the game completely freezes the world and bombards you with incessantly dry narration of your current mission is just baffling. It feels so amateurish next to the impressive technology that powers the game and feels either like a cut corner or a rushed addition. Couple that with missions that don’t have an auto-restart option for failing, bafflingly limited checkpoints and the occasional game-crashing glitches and getting through the campaign in Guerrilla can be a test of patience. 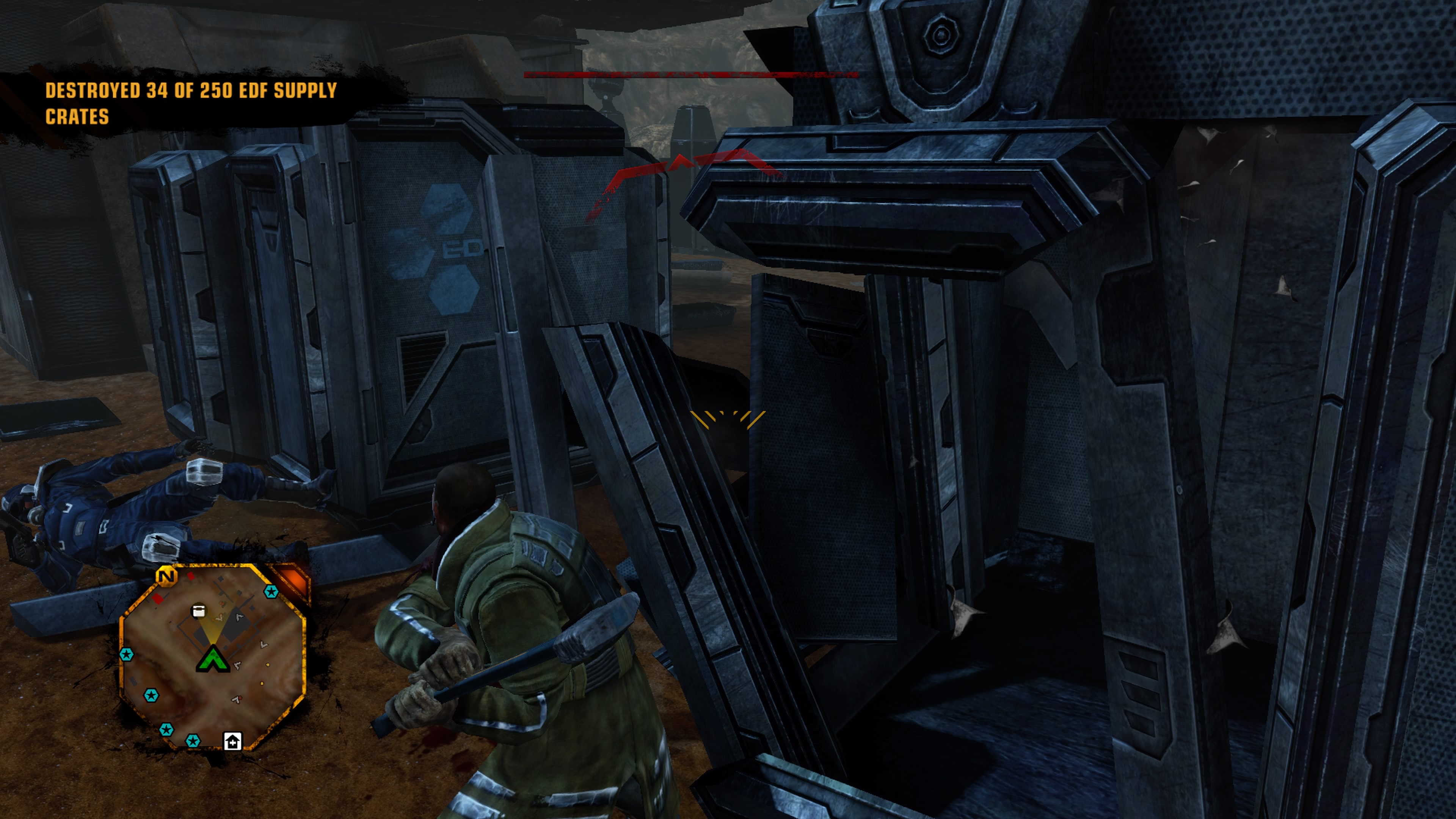 I just wish the AI wasn’t so hell-bent on destroying you. Playing on anything above “Normal” difficulty is just asking to have a bad time, but even selecting the easiest setting can sometimes have missions where the enemy will be on top of you from the moment you hit start. As early as the fifth mission in the game, I was driving my car to smash some EDF sensors and I could swear my vehicle was made of magnets. The AI was on top of me almost the entire way through and I would attempt to jump out and switch vehicles only to get lost in the sea of cars plowing over me.

It just keeps getting more and more frustrating, too. Later missions have enemies with pinpoint accuracy and in such overabundant numbers that you’re constantly sprinting away from everything since there isn’t a point to cover. The open-world design means foes will come from literally everywhere, so you might as well haul ass and try to finish objectives as fast as possible. It really starts to make you hate the structure of these missions and how utterly bland the plotline really is. There isn’t much reason to keep plowing through other than to witness buildings crumbling to the ground.

What does work is the plethora of side content available. Not everything is a winner, mind you, but they almost all feed back into the central premise for the game and include some way to further destroy the buildings around you. My favorite has to be the small puzzle-like destruction missions that task you with toppling a particular building with specific stipulations. Trying to figure out what the game wants you to do with the tools available is a real treat and highlights exactly what Guerrilla gets so right. 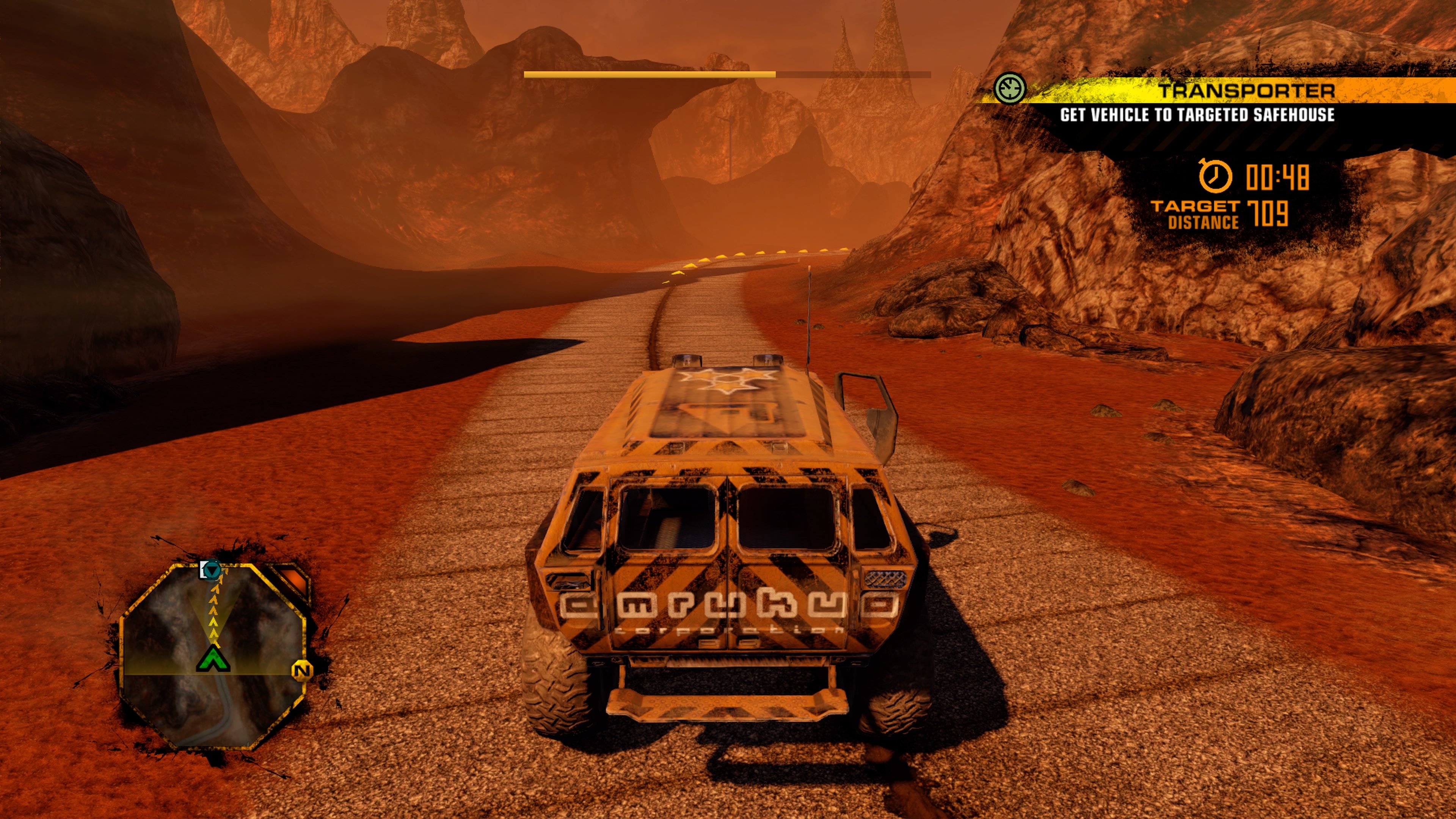 The various collectibles also do this, requiring you to break propaganda signs or smash ore deposits. This then feeds back into the upgrade system, which works by having Alec collect scrap from his impromptu demolition sprees. Topple a building, grab some scrap and upgrade your guns. It really is a well-thought-out system with some meaningful extra content scattered throughout.

What does suck is the driving in the game. It wouldn’t be an open-world game on the 360/PS3 without some kind of driving and holy cow does Guerrilla not get this right. Maybe Mars just has radically different gravity than Earth, but each vehicle feels floaty, imprecise and utterly devoid of pep. Even the fast cars barely move and it feels like you’re almost standing still with how sorry the sound design is. I like hearing the roar of the engine and the screech of tires, but the cars in Guerrilla are pretty damn quiet.

Even with those flaws (and the hopelessly repetitive missions), Guerrilla still remains a solid title. I don’t know if it is worth it to 100% the game, but you’re bound to have a good time with Guerrilla in 2018. That is if you can play the thing without it crashing all the time. I’m very surprised at how lackluster this port is because it took me quite a few entire system restarts to make it through the campaign mode. 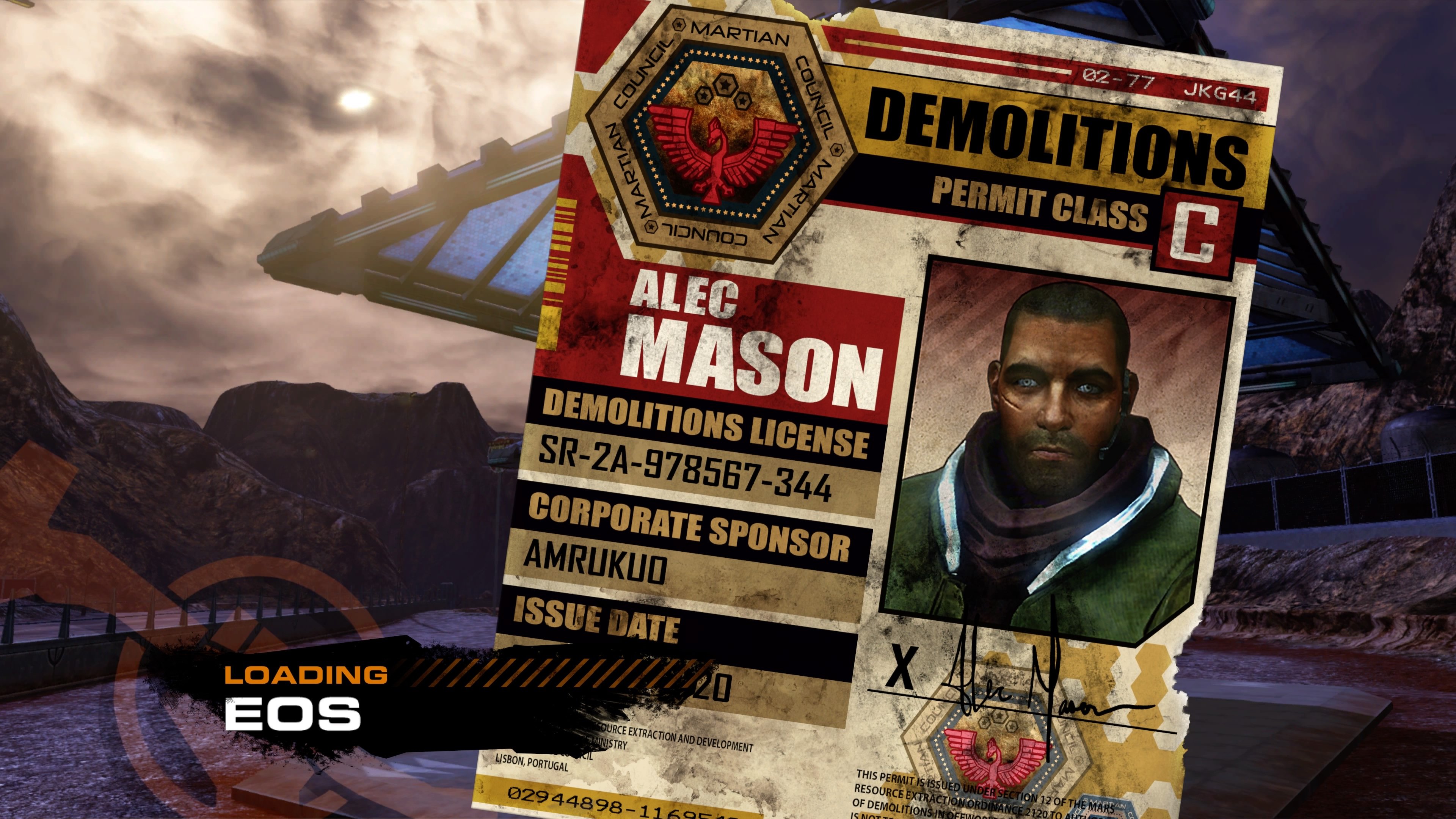 During a few missions, I would encounter bugs where the game would just freeze while the audio kept going. I could circumvent this by quitting the application, but other times the game would hang during the load screens along with my PS4. I did actually test out leaving it sit for 15 minutes and the game would eventually load, but other times that wasn’t the case. I would have a black screen and nothing going on, necessitating a restart. At other moments, my PS4 would throw up an error message and automatically close the game for me, causing me to lose some progress since my last auto-save.

Even if these problems weren’t as numerous as they are, the framerate issues are truly confusing. I know the 360 and PS3 couldn’t properly handle Guerrilla, but you’d figure a PS4 Pro would have no problem running this game in 1080p. Sadly, if you blow up too much stuff at once, the game will chug hard. Couple that with some weird controller lag I would occasionally encounter and I have no idea what went so wrong with this remaster.

The actual graphics look pretty nice, at least. The new lighting model adds a lot of depth to each area of Mars and helps give the game a more defined look. Cars have been given some slightly better polygon counts and there are new normal maps added to each texture. The general resolution of everything has seen a nice increase, looking very sharp and clean. There are definitely some things that still feel like a last generation game, but you could mistake Re-Mars-tered for being a current-gen project. 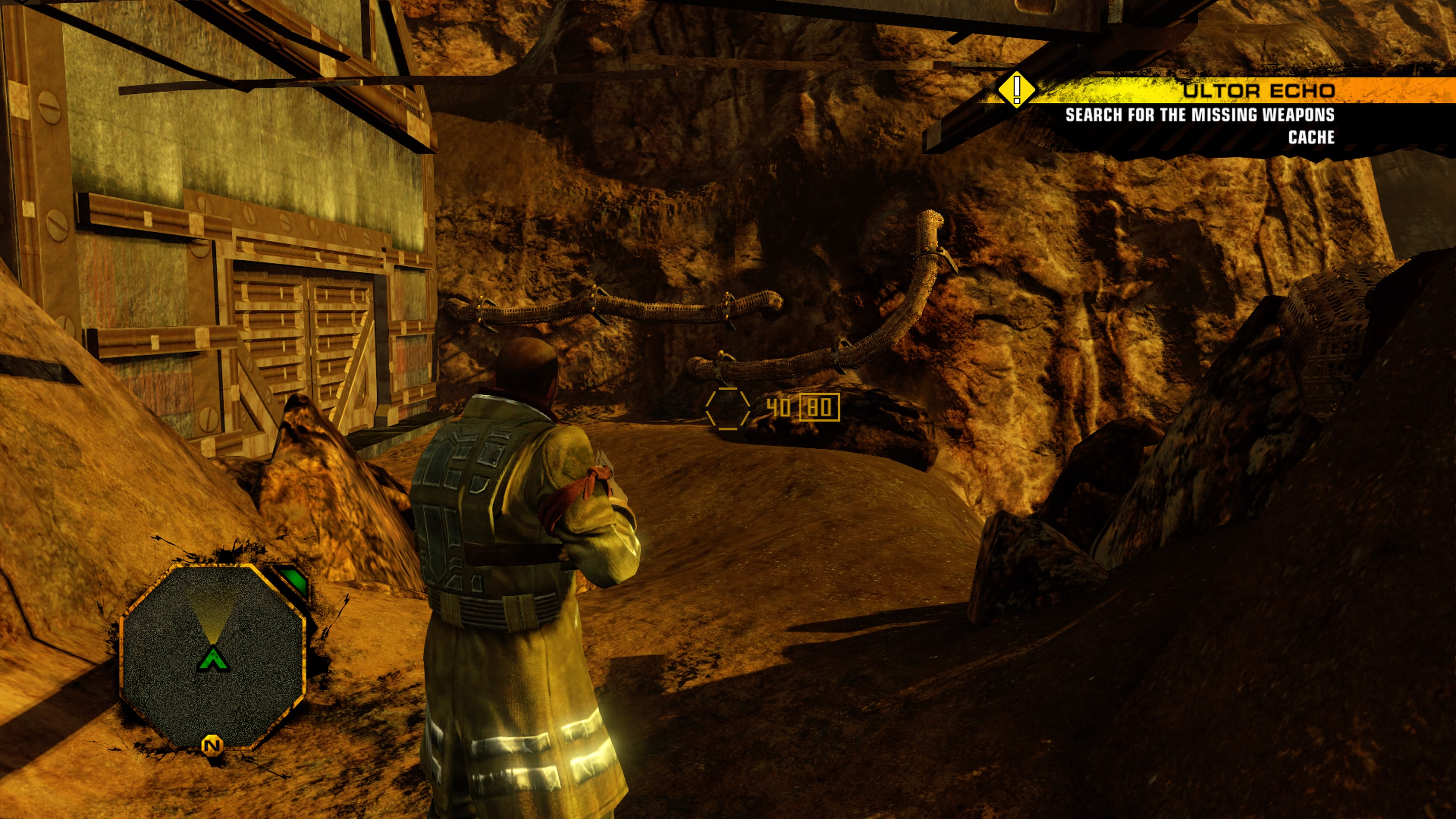 With regards to extra content, the multiplayer mode has made the cut. Even the DLC is here, which means you’re getting the complete Red Faction: Guerrilla experience and that is awesome. I still don’t understand why some developers will opt for a remaster of a hit game and then ax game modes that people enjoyed.

I just wish all the performance issues were resolved before shipping. In all good faith, I can’t recommend you rush out and grab this immediately with how shoddy the performance can be. It would be one thing to deal with a crummy framerate, but having the game crash as often as it did is no good. I want to destroy buildings, not sit through boring-ass dialogue, have my game crash and then sit through that chatter again.

Hopefully, some patches bring this remaster up to par, because it would be unforgivable to have Guerrilla fail a second time due to a rushed port.