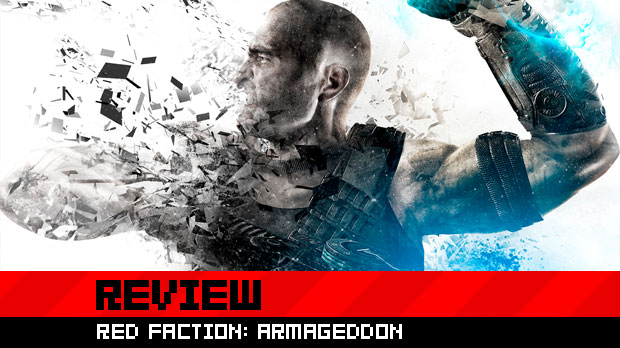 There are few things more satisfying than planting explosive charges around the base of a massive structure and then stepping back a safe distance, before detonating them. The resulting chaos — the crumbling of steel and concrete, bathed in a cloud of smoke and ash — is nothing short of orgasmic.

Voliton’s Geo-Mod technology, used in 2009’s Red Faction: Guerrilla was kind of like the Kama Sutra of in-game destruction. A sprawling open-world playground of pure destruction, Volition provided gamers with the tools (and the sandbox) to cause bedlam that few games had before (or since) been able to deliver.

With Red Faction: Armageddon, Volition attempts to control that chaos, delivering a more linear experience that drives players through a story wrought with near-relentless action. While the result is in many ways a more refined experience, Armageddon‘s restrictive nature may leave many gamers wondering: “When do I get to blow s**t up again?” 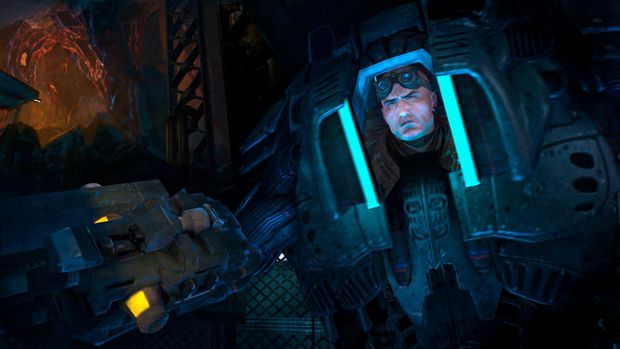 Set 50 years after the events of Guerrilla, Armageddon picks up the story of Darius Mason, who’s been tricked into awakening an army of Martian monsters. The game’s relatively short campaign follows Mason through a series of underground caverns, as he’s relentlessly harassed by nightmarish creatures hell bent on mauling him to death.

Fortunately, he has an assortment of weapons at his disposal, which is easily Armageddon‘s biggest strength. We’re talking about 14 different weapons, ranging from standard assault rifles to classic explosives to more colorful alien technology like plasma beams to a rifle that evaporates anything you hit it with.

The star of the show may very well be Mason’s Magnet Gun, a weapon capable of snapping together most any two targets in the game’s environment. Let your mind wander with the possibilities, and you’ll get the idea. Snap your first shot onto one enemy, the second to another — watch them slam into one another like some kind of science-fiction-themed Three Stooges act. Or more satisfying, snap your first magnet to a large structure and your second to an unfortunate target. Sit back then and delight as part of (or all) of a building comes crashing into the maw of a slobbering alien menace.

Mason also has a number of “Nanoforge” abilities at his disposal, special powers that have various uses, both in battle and in defense. The reconstruction ability is particularly fun to see in action, rebuilding any damaged man-made item, from staircases to entire buildings. Another, called “Impact,” sends out a pulse that tears through anything in its path, from walls to enemies. 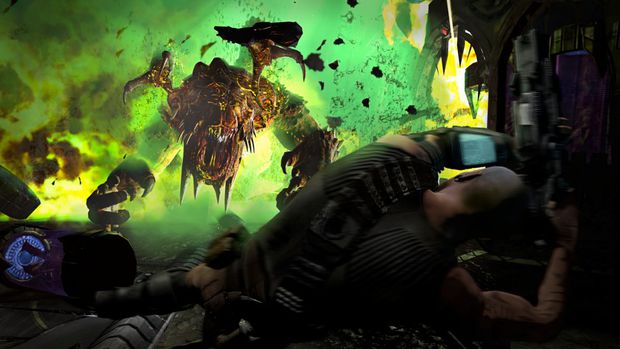 The game’s third-person shooting feels good, and Volition’s generous “lock on” targeting (by pressing and holding the controller’s left trigger) makes killing effortless. Once you’re snapped on an target, you can adjust your reticule for more precise shots (to the head, for example), but it’s mostly not even necessary.

On the game’s default difficulty, I found I could just snap onto targets — one after the other — taking them out with relative ease. With no real cover system to speak, I spent more time out in the open raining fire on enemies and rolling about to avoid fire than carefully thinking about my attack. Yes, you can duck behind structures (and the game repeatedly reminds you that you can repair destroyed objects to use as cover with the Nanoforge), but it’s probably not necessary. That kind of unabating action isn’t the worst thing you could get from Armageddon, however, especially if you go into it hoping to turn your brain off and to make a mess of alien guts.

Despite the wild alien-vs-Mason skirmishes, it’s hard not to feel like you’re on a guided tour of the Mars underground throughout the entire adventure. Volition holds your hand every step of the way, pushing you through tiny corridors and confined spaces; it simply doesn’t lend itself to the environment devastation most players will be looking for.

I almost always felt like my back was up against a wall, a few feet from a building or cavernous obstacle. So many of the game’s areas are uncomfortably claustrophobic, with a ceiling a few inches from Mason’s head or walls on all sides, forcing you straight ahead. My gamer instinct in these small areas was always “don’t use the rockets, don’t use the explosives,” because you’re bound to take damage. The game does open up into some larger spaces, and there are a few areas where you hop into wild vehicles and aimlessly destroy everything in sight. Still, those areas are too few for a game that should be priding itself on and highlighting its destruction tech.

With a laser focus on moment-to-moment action and linearity, Volition was also able to more tightly guide Armageddon‘s narrative. Unfortunately, it never elevates itself above the level of a low-budget science-fiction/action picture. Sure, the game’s characters are well-acted and the cut-scenes (of which there are many) are mostly entertaining on a base level. But some of the game’s dialogue will have you raising an eyebrow, with humor that falls flat or feels out of place.

There’s also at least one key plot element (one that I can’t mention without ruining the game’s story) that’s such nonsense that it nearly pulls the rug right out from under the entire production. But like the gameplay, it’s just entertaining enough that it never really becomes offensive. 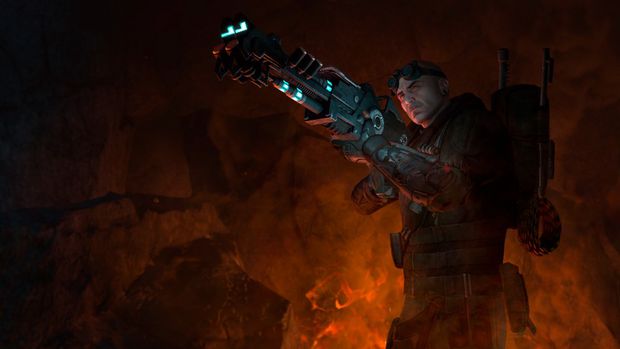 Folks banking on having a long relationship with the single-player campaign will be disappointed to hear that I completed it in just under six hours on normal difficulty (this according to an in-game timer). Finishing the game will unlock a “New Game+”, though, and gaming’s most ridiculous and powerful weapons: a unicorn that farts rainbows. While that alone may make the experience worth it, Volition has included a ton of unlockable cheats, as well.

There’s also an extensive upgrade system for your in-game abilities that can be carried over into the game’s multiplayer mode, of which there is one, called “Infestation.” Volition has ditched the competitive action for a cooperative wave-based experience, leaving this in its place, which comes as a bit of a disappointment. To this mode’s credit, there’s a ton of content here, with eight missions featuring 30 waves a piece. Some have objectives that are simply surviving waves of enemies; others have you defending a critical area.

In all cases, what it really boils down to is killing aliens as they hop around a map. Fortunately, what this affords you is time (and in some cases, room) to really experiment with the game’s expansive weapon set. The magnet gun, for instance, saw almost no use for me in the single-player campaign. While playing “Infestation,” I was more comfortable using it, and had a blast screwing around. This also means opening up my arsenal to explosives, and using the Nanoforge more frequently to rebuild cover from rubble to survive waves of baddies. 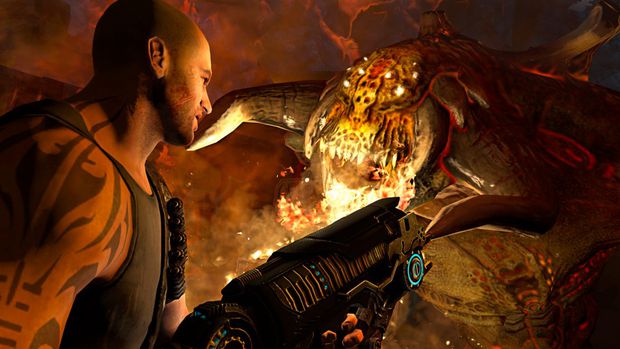 Armageddon also features a destruction mode called “Ruin.” These timed and scored challenges are literally all about causing as much destruction as possible in a given time frame. It’s easily the best demonstration of what makes Red Faction and Volition’s Geo-Mod tech so great. These one-off challenges are fun and a great way to blow off steam, it’s just unfortunate Volition couldn’t have woven this kind of chaos into the single-player campaign where it really belongs.

In many basic ways, Armageddon is a superior game to Guerrilla. It makes strides in a number of key areas that are hard to ignore, including more polished visuals and a broader range of spectacular weapons and abilities. But ultimately, it manages to miss the mark when it comes to the core elements that made the open world game so great: freedom and ample opportunities to simply trash the game’s world. Armageddon isn’t a terrible game by any stretch, it simply falls short of its potential.