I’ve heard people say space is an ocean. I’ve also heard it called the wild west of the future. With a background track of dirty butt-rock, a cast of colorful miscreants, and a movement system that feels more like steering a fully-rigged ship of her Majesty’s navy than flying a spaceship, it’s the best of both worlds in Rebel Galaxy.

Sadly, the potential of this amazing premise is cut down at the knees by repetition and cliché. The good parts of the game are great, but the heavy emphasis on grinding and running the same few sorts of missions over and over again undermine the whole. You may start off feeling like a devil-may-care Malcom Reynolds sort, but before you know it you’ll be another tired, frustrated, and bloated Admiral Adama. Nobody wants to be Admiral Adama. Adama didn’t want to be Adama. 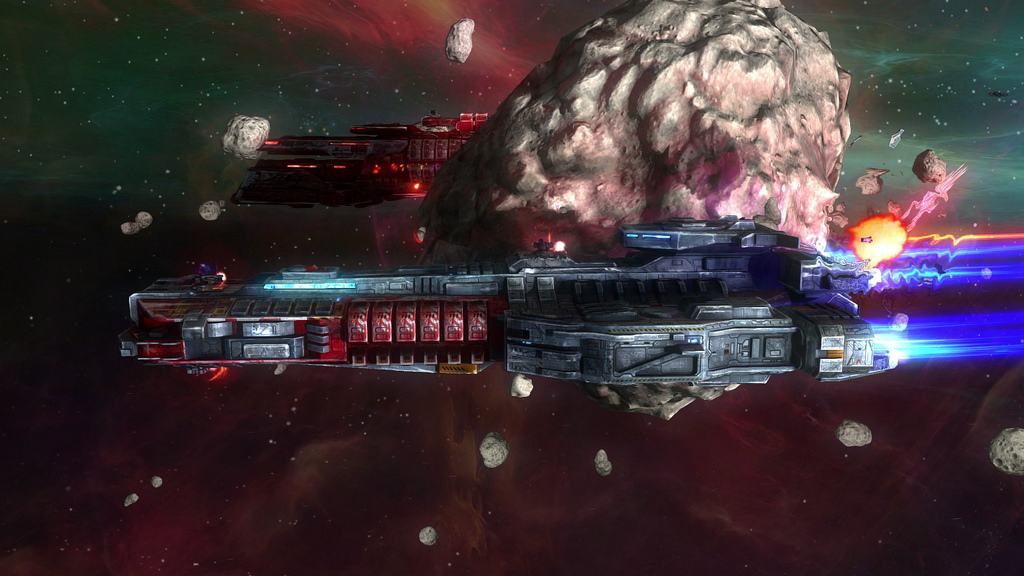 Rebel Galaxy puts you in the boots of a space-faring renegade just looking to make a buck at the edge of the known universe. I mean, yes, you’re estranged aunt mysteriously gifted you her old ship which was weird, and she also left you in possession of an alien artifact which, wouldn’t you know it, happens to house an ancient A.I (don’t they all) and you should probably look into that at some point — but you also have to stack that paper! The main plot can be safely tackled at your leisure while you put time into building your personal net worth and outfitting the ship of your dreams. How you do that is up to you. As a kind of spiritual successor to Freelancer, Rebel Galaxy allows you to make your way through life on the rim anyway you like. As long as it involves shooting people.

At every space station there is a mission board brimming with contracts from the various factions in the game. You can run drugs for a criminal cartel, bust up a pirate siege for the militia, provide some armed backup for the merchant guild, or pick up shady dead-drops for a cloak-and-dagger agency. Of course, let’s not forget the most classic of all fictional space-faring economies: the glamorous world of asteroid mining. While there is plenty of outward variety in contract types, almost all of them will result in an inevitable shootout. Even the mining. Especially the mining. This is my ore and you can’t have any of it. *pew pew* 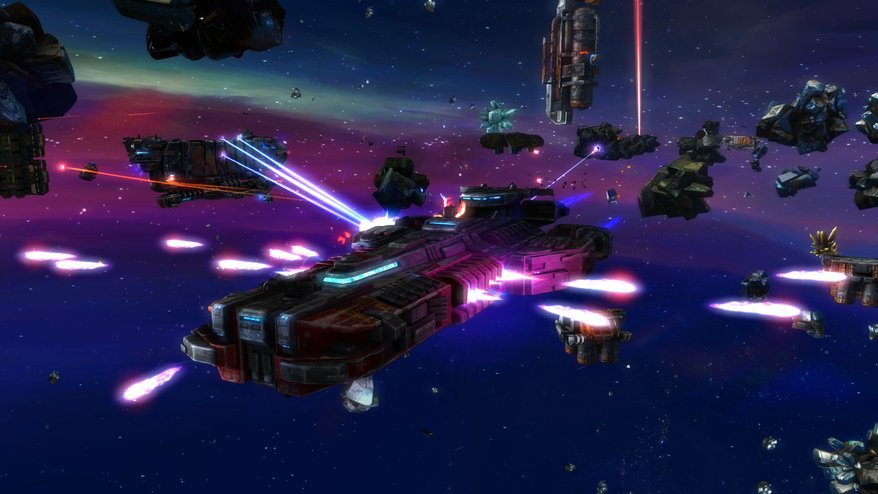 Thankfully, the space combat on tap is pretty damn cool. As I mentioned earlier, your ship in Rebel Galaxy performs more like a boat than a spaceship, locked on a single two-dimensional plane that you can steer around on left and right, but not up and down. Other capital ships are locked to the same plane, making standoffs with them feel like large naval battles (your most powerful weapons are actually broadside cannons, hammering home the effect). Meanwhile, smaller ships — such as enemy fighters and your hired wingman — zip around in a fully 3D space. They’ll be coiling and wrapping around your larger vessel as you try to train your various mounted turrets on them, worry about the exposed shielding on your portside, and prepare to deflect an incoming volley of torpedoes.

The battles become frantic, glorious displays. When you aren’t manually aiming weapons yourself, the shipboard A.I will take over the unoccupied ones, making your ship a floating little ball of hell that is constantly spewing fire in all directions during a brawl. When you finally get a decent vessel that can mount a variety of laser turrets, homing missiles, and a full rack of broadsides, the spectacle of lights, colors, and exploding ships can be downright jaw-dropping. Active abilities like deflector shields and manually locking weapons (to make sure you don’t just let auto-pilot do all the work) and different equipment set-ups can encourage some downright risky strategies if you like to roll the bones.

A reputation system governs how much each faction loves/loathes you. Taking a job from one faction pretty much always means screwing someone else over, so it is impossible to make friends with everyone. That said, it also never really came to much in my game. Space pirates hated me, the militia were kinda dickish but not overtly aggressive, and pretty much nobody else cared that I existed. It’s a lot of numbers and systems that don’t seem to really amount to much — a theme that is repeated in many of the game’s mechanics.

Rebel Galaxy is built on a mountain of minutiae that seems important and interesting, and I suppose on an intellectual level it is, but amounts to little. For example, a living economy governs commodity trading at different stations. Not only do stations buy and sell different space tchotchkes and doodads, but the type of government that rules the station, current political situation, and other special events have an effect the market. Conditions like an arms race will bump up the price of salvaged munitions and weapons tech, for example. Where it gets really crazy, however, is that condition also spawns a treaty ship that will eventually make its way to the station to put an end to the arms race. If you’d rather keep hocking guns on a seller’s market, you can go out and destroy that ship to prolong the conflict. 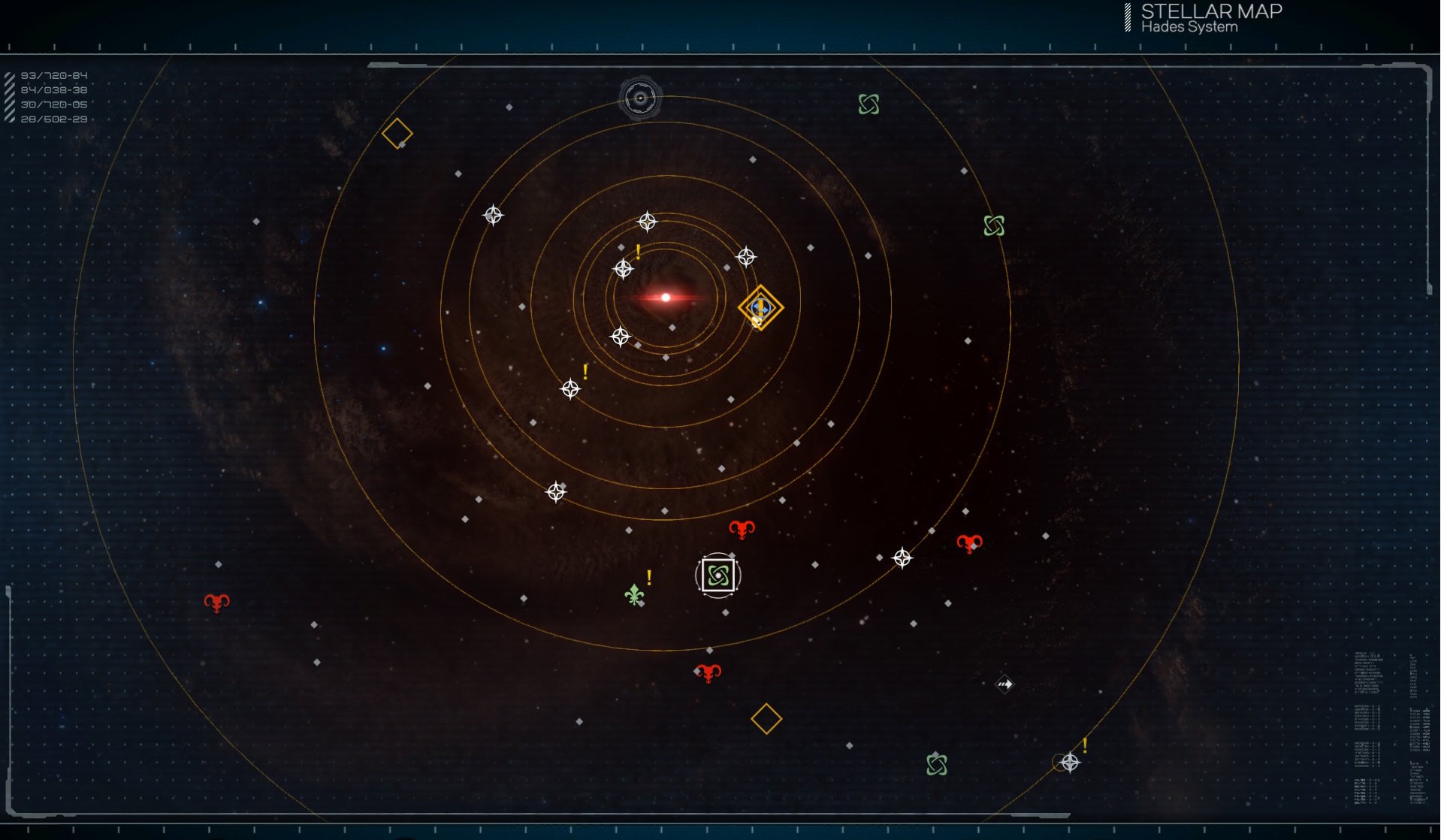 That’s all super cool but also, sadly, pointless. Those situations don’t affect the plot or change anything else about the world. They just rearrange the stats on one of several dozen identical stations. While playing the market seems like a neat idea, it is also time consuming and inefficient compared to just going out and blowing stuff up. If I had to describe Rebel Galaxy in one word, it would be “broad,” not “deep.” There is a ton to do and all kinds of interesting interacting systems, but they only exist as curiosities.

For a game that borrows so much from the likes of Firefly and the Millennium Falcons of the world, I was somewhat disappointed that there didn’t seem to be any great options to play as a scoundrel, a lawbreaker with a heart of gold. You can take on illegal work and choose hardball dialog options of course, but I wanted to smuggle contraband and slick talk my way out of double-dealings. In Rebel Galaxy, walking the outlaw path has you trafficking space slaves and murdering random traders for their shitty cargo of worthless ceramic plating. It’s good guy or Reaver, without a lot of gray in between.

Speaking of the Firefly tone, Rebel Galaxy has a very distinct soundtrack of Kid Rock-esque tunes in an effort to capture that same space-western mystique. For the first little while I was really digging the vibe. A “dirty south meets final frontier” kind of thing. But as my time with the game stretched on and I was treated to the same three or four songs about being a “bad man” and sharing a train seat with Satan over and over again, I felt a little part of my soul chip away and drift into the void. The game constantly blares butt-rock at full volume, and every single song sounds almost exactly the same. Imagine being stuck at a NASCAR after-party that never ends and you’ll get the picture.

The soundtrack isn’t the only thing that wears out its welcome. For as much as Rebel Galaxy wants to be a sort of deep-space simulation where you can be and do whomever and whatever you want, it all too quickly blurs together into a mushy pile of “bleh.” Every mission is essentially the same, the only difference is the number and strength of the ships you’ll be fighting. Every distress call is a fight with pirates (imperiled trader or “unexpected” trap, flip a coin). Every dialog interaction with bartenders, traders, and pirates run the same options and same canned responses. Enemies have such a limited arsenal of combat barks and threats I was actually hearing them in my sleep after spending a week with the game. 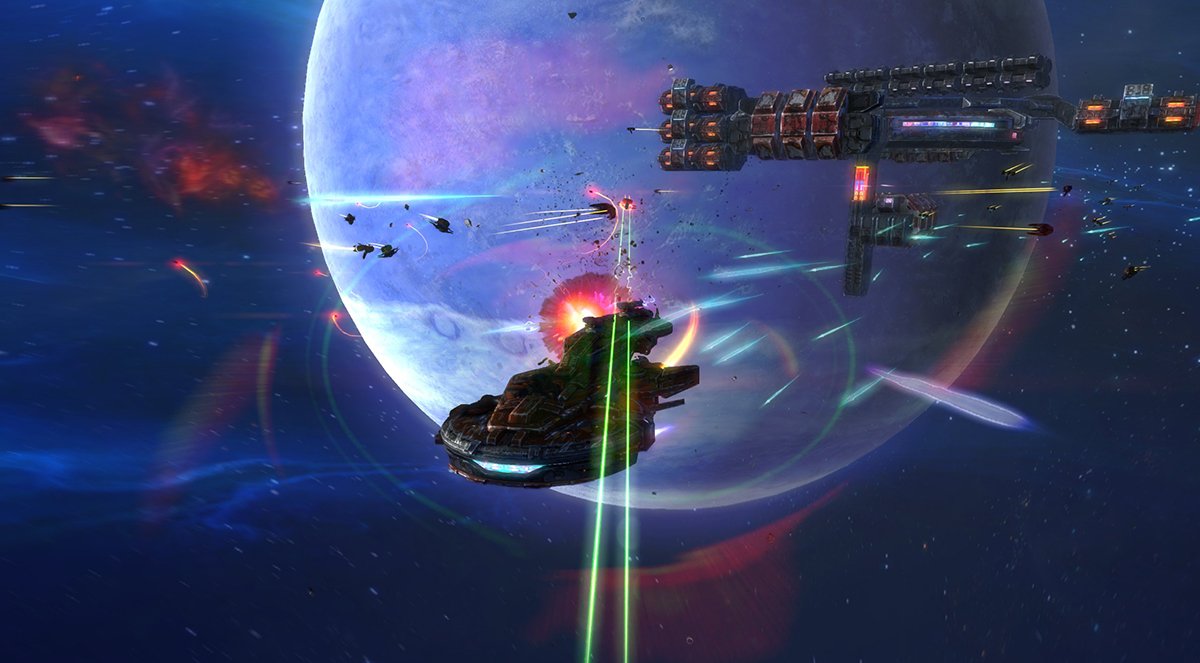 The worse sin is that it somehow expects you to dig all of this repeated content for hours and hours on end. The game is every bit a treadmill as a typical MMO, only there is no one else to talk to and you can’t make your ship dance. Every ship and piece of equipment costs exponentially more than the last. Small upgrades take half a dozen missions or more to earn, and you can forget about the high-end gear. You travel around the galaxy in real time, manually going to warp speed toward every destination, and coming to a dead stop every time a random piece of space junk floats in your way.  For a single player game that already has plenty to see and do, it feels needlessly padded. In space, no one can hear you grind.

Yet, despite my many complaints, Rebel Galaxy did put a smile on my face. It’s an ambitious little game that regrettably tries too hard to grab something out of its reach, but what it does get its hands on is excellent. The combat is spectacular, the atmosphere is charming (prolonged exposure to the soundtrack aside) and while there isn’t as much depth to the game’s systems as it would like you to believe, they are fun to poke and prod at when you get tired of blasting people with your lasers. Rebel Galaxy is the kind of game I’d want save for a rainy day when all I want to do is set my brain on auto-pilot and lose a few hours watching pretty colors and dreaming about being Han Solo.