For whatever reason, the Ratchet & Clank series never really grabbed me during the PlayStation 2 era. Maybe I was spending too much time playing Jak and Daxter (or perhaps I was adverse to games with ampersands in their titles) and the million other mascot platformers at the time, but it took me quite a while to get into it.

Once I did however, I found out I was missing quite a bit. Over the years I’ve seen the Ratchet series acquire more and more outstanding titles, and Into the Nexus is no exception. 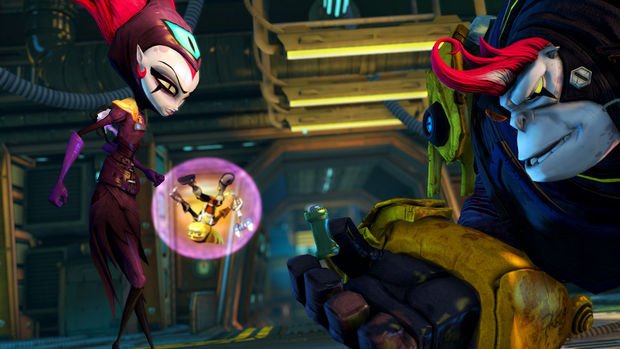 Created as a finale to tie the four-game Future subseries together, Into the Nexus hits the ground running with a very simple setup — you’re escorting two dangerous criminals to a place called the Vartax Detention Center, and things go terribly wrong.

You don’t need to know what’s going on in the context of the series at large, as the premise is about as hard to fathom as a Saturday morning cartoon — but fans will get a lot more out of it due to appearances and references from past entries. Most of the voice work is solid and the classic comedic tone is preserved from previous games, to the point where I wasn’t laughing out loud that often, but I couldn’t help but crack a smile throughout.

What starts off as a typical space romp gets real Lovecraftian partway into the game, and that’s when the “Nether” aspect really takes off. These beings from another dimension start leaking out into the galaxy at large, and the game shifts gears to entirely focus on the Nether situation. These aren’t just cosmetic neon purple skins slopped onto regular enemies either — the nether aspect lends itself to a wide variety of enemies, most of which teleport around and keep you guessing constantly. Not only do they look formidable, but they feel that way too in-game, making them worthy and interesting adversaries to fight; particularly on higher difficulties.

The “Nether” theme goes a bit further, as Ratchet’s robot pal Clank is outfitted with the ability to go spelunking in the Netherverse, which are straight 2D platforming distractions. These portions are a lot more fun than you’d think, thanks to borrowing the gravity mechanic from VVVVVV in all the right ways. Using the right analog stick you’ll change gravity not only in a vertical manner, but horizontally as well (which is both confusing and fun). I wish there were more of these, as I would probably buy a digital spinoff game using this formula. 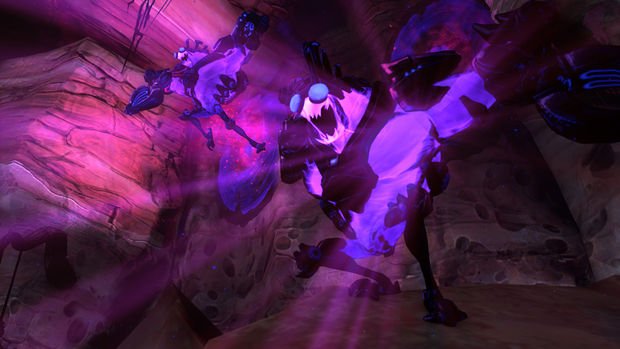 Outside of the Netherverse, platforming with Ratchet is a joy thanks to the solid camera and smooth framerate. The Ratchet & Clank series was never really about technical action, and more about shooting, which is completely fine with me given the fact that it does this well. Shooting is as simple as holding down L1, aiming, and blasting away, and of course you still have your melee-centric wrench should all else fail. Weapon switching can be done by tapping triangle to swap between your last two guns, but in order to switch beyond that you need to hold triangle to bring up your wheel — which pauses the action and feels awkward.

But I can easily overlook that annoyance given the fact that every weapon can gain levels and earn experience. Into the Nexus gives you a constant sense of positive reinforcement and progression — like everything you do is relevant and is working towards something greater. For example, you start the beginning of the game with a pistol that essentially functions as a pea shooter, but eventually becomes a deadly set of dual rapid-fire pistols. It’s a great system because it eliminates weapon redundancy, and allows you to play the way you want.

There are tons of gadgets and weapons to experiment with — perhaps more than one human was ever meant to enjoy. You can create gravity streams to get from place to place, use rocket boots to dash about, and the jetpack portions (although there aren’t enough of them) are a blast. Should you want to mix things up you can either locate or buy new weapons and gadgets, as well as upgrade your arsenal via a skill tree by tracking down a resource called Raritanium. Leveling up weapons unlocks new tree paths, and new “mystery” upgrades — it’s an addictive system in every sense of the word. 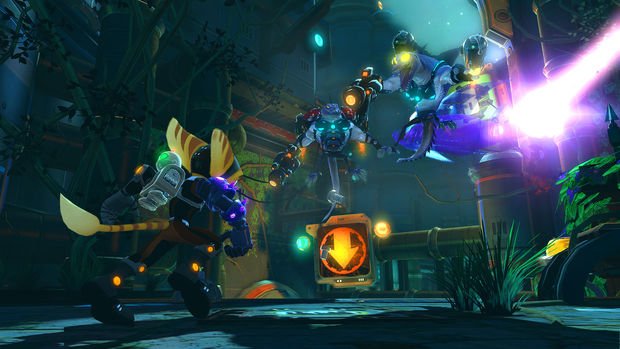 From a design perspective the level pacing is swift, and there’s hardly a dull moment, mostly because it’s a bite-sized entry to go along with the lower price. The vast majority of the action takes place in semi-open-world sandboxes, which are just about right in terms of size, but may leave you wanting more depending on how much you enjoy the game. An arena returns with multiple optional challenge levels, and considering the fact that you only have to do one level to progress with the story, it far from overstays its welcome. My only major complaint is that a number of the boss fights tend to just re-skin prior foes.

As previously mentioned, Nexus is a smaller adventure that will last you anywhere from five to 10 hours, maybe more if you really want to dig into everything. After beating it you’ll unlock a challenge mode, which is is essentially New Game+ with some extras, more bolts to collect, and an added difficulty. There’s no multiplayer component here, and that’s perfect okay with me.

Ratchet & Clank: Into the Nexus doesn’t make great strides to change up the series, but fans won’t be disappointed. Nexus is short, sweet, and to the point, with hardly a dull moment in sight, making it a fitting conclusion to the Future series. When you add in the fact that the game is budget priced and you get Quest for Booty for free, it only sweetens the deal.