I remember the first time I played Tetris on my (lately acquired in the early ’90s) Game Boy — I sucked at it. It was one of those moments where no matter how much technical prowess I had at platformers and encyclopedic knowledge I acquired from RPGs, nothing could have prepared me for Tetris‘ mathematical complexity.

But over the course of the following few years I stuck with it until I ran into a boy genius in elementary school (who ended up skipping grades) that taught me the fundamentals. Thanks David, you prepared me for Puyo Puyo Tetris. 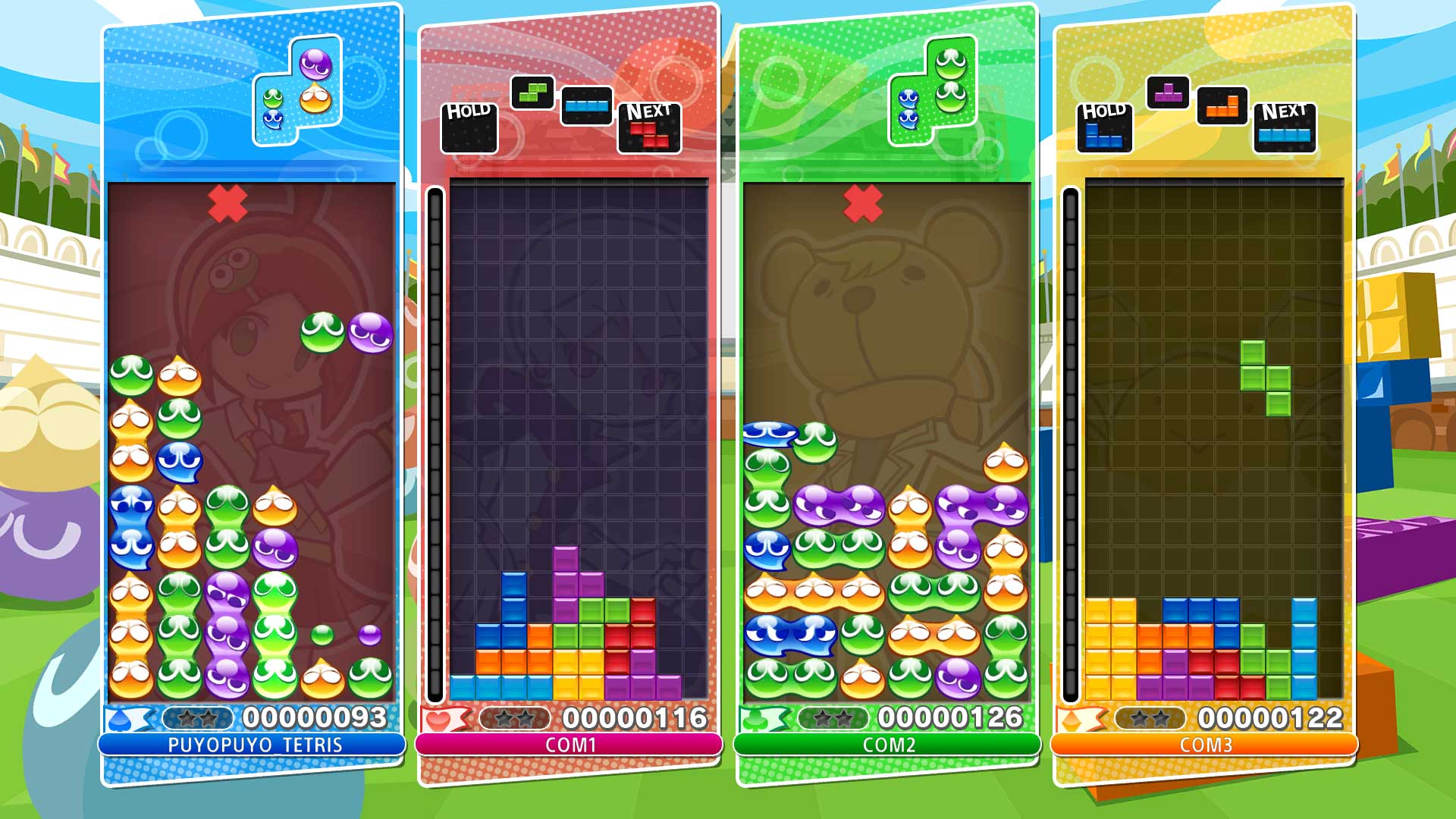 I was prepared for Puyo Puyo too (thanks Matt), but you don’t need any prior experience with either series to dig into this one. In case you haven’t picked up on this by now Sonic Team has essentially combined the Russian and Japan-born classics into one game, and given how many contingencies there are for both, it’s a perfect match.

Similar to how Dr. Luigi mixed up Nintendo’s Dr. formula, Puyo Puyo Tetris is far more bold. You can either choose to play the blob-centric Puyo Pop (as it’s known in the west), the line-based Tetris, or both at the same time. There’s extensive tutorials for each, explaining the basics like matching up a line or providing explanations for chains and combos.

But again, Sonic Team takes it to an extreme here by allowing for every type of play style. If you hate Puyo Puyo and just want to play Tetris for hours on end, you can do that — and vice-versa. Playing the melded mode works far better than it should, as pieces alternate between the two in the same play space. Constantly trying to make lines and break Puyo molds is hectic, especially if you’re playing with challengers that are dropping hostile blocks into your zone (known in the genre as “trash,” or “garbage”).

Veterans who spend their time chasing leaderboards are going to love testing their chops and figuring out the complexities of combos. You can opt for slow or instant drop variations when slotting pieces, crush trash with Tetris blocks, and test your fortitude with constantly changing “tsumo” pieces that need to be slotted at the perfect moment. There’s so much to re-learn, and I’ve been playing Tetris for over two decades, and Puyo for around a decade and a half.

I haven’t even mentioned Swap mode, which is probably my favorite of the lot. Here you play Tetris and Puyo separately, with each board swapping into the foreground at certain intervals — if you fail one, it’s game over. It’s a perfect balance in the sense that it encapsulates what makes this release so impressive, as neither theory is overpowering. There’s also an optional item mode that provides gimmicks like view-obscuring power-ups if that’s your thing. It can get as low key or as wacky as you want.

Yet, the most impressive aspect of Puyo Puyo Tetris is how accessible it is. There’s a story mode that gradually eases you into various layers of complexity, along with providing a cute (if innocuous) narrative that tenuously connects its weird Sanrio-like cast. It’s far longer than I expected it to be, but I’ve also spent hours on end playing with (tough) CPUs, so even if I can’t wrangle up friends both offline and online, there’s still plenty to do. 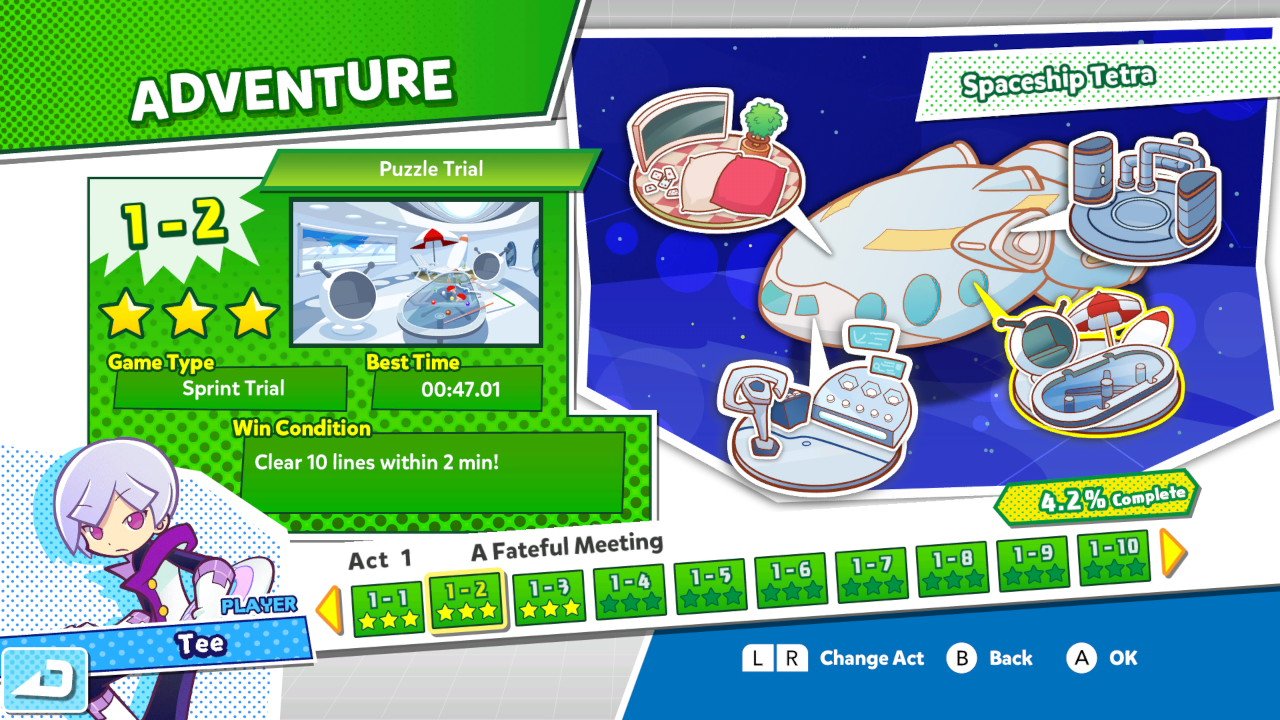 Although I haven’t tested the PS4 version yet, it’s very clear that the Switch is the way to go. You’re literally getting on-the-go network play at your fingertips when traveling, the touchscreen makes menus even easier to flip through, and the ability to set the tabletop up and get four people going instantly is an amazing party trick. It’s strangely more expensive on Switch if you’re going physical (a victim of the dreaded cart markup theory perhaps?), but worth the plunge.

Puyo Puyo Tetris is one of the best puzzle games I’ve ever played, not just because it’s based on two mechanically sound, battle-tested puzzle philosophies, but because it goes all out and doesn’t leave any room for an “extended edition.” It might not be the pinnacle of either, but it’s the best mix I didn’t know I wanted. Grab it, take it on the go, and preach the gospel of Puyo Puyo.