We are accidents waiting to happen

Back in 2005, Psychonauts was something different. It followed a lot of the standard platformer concepts — powering up, collecting gobs of different items, jumping — but it added a special sauce. It was characters, and it had them in spades. Not just fancy talking farm animals to give you quests, either, it was people with depth.

It was core to the game. Aside from the NPCs who roamed the Whispering Rock Psychic Summer Camp, there were some whose minds you would delve into. You’d explore their pain and try to glue the fractured parts back together. It was a special sauce that endeared it to a lot of people. Not enough to entice publishers into funding a sequel, however.

For that, Double Fine turned to crowdfunding. That was back in 2015 and now, nearly six years later, we’re ready to finally open the door to see if the juicy grey matter of Psychonauts 2 still has that special sauce slathered over its undulations. 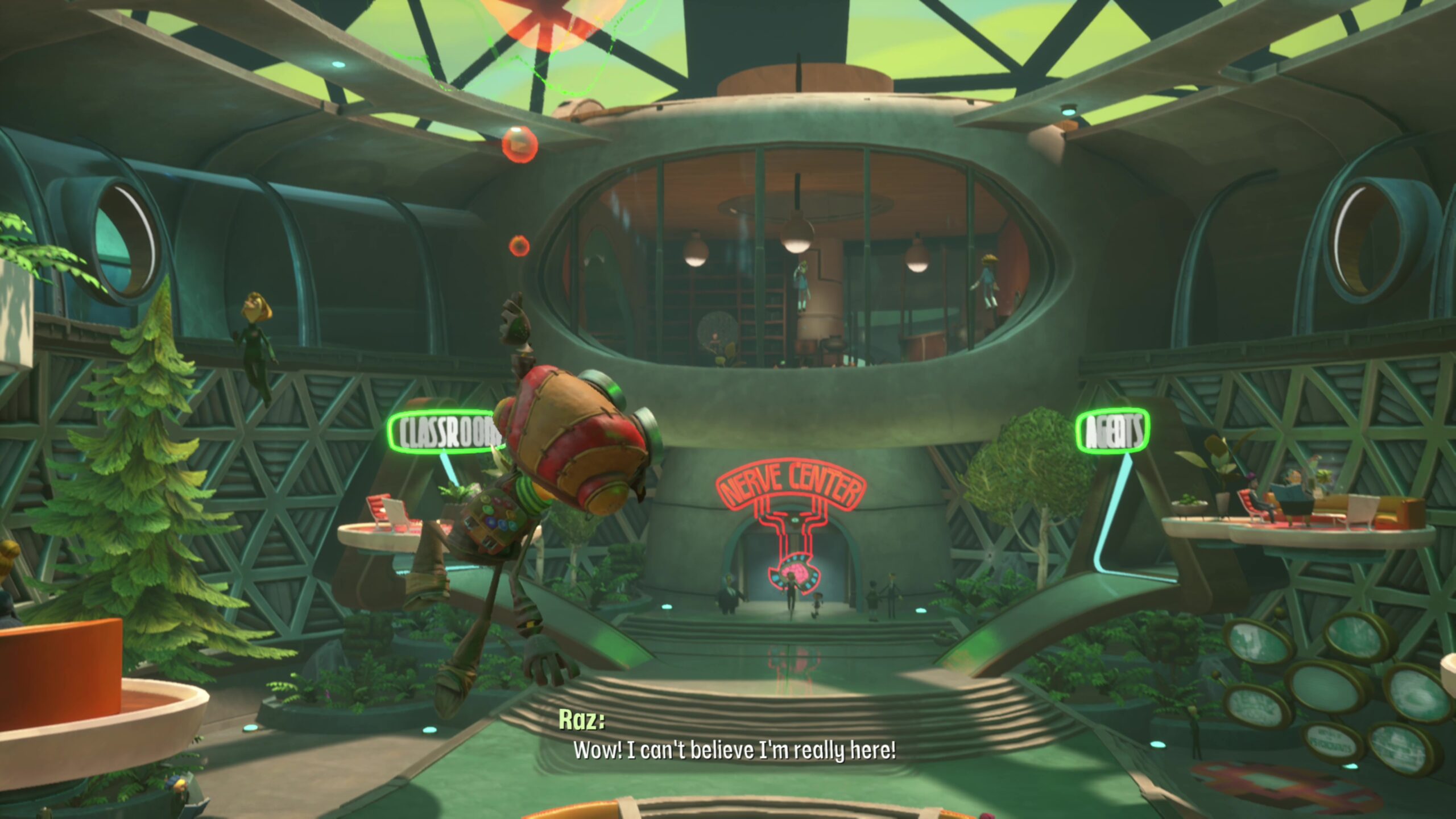 The narrative of Psychonauts 2 picks up after Rhombus of Ruin. Are you poor like me and don’t have VR? Tough luck. But there is a recap of both the first game and Rhombus to bring you up to speed, it just doesn’t do a particularly great job. Psychonauts establishes a lot of groundwork for how its world works, and that’s not explained well in the recap. I’m not saying you couldn’t understand the plot of Psychonauts 2 without playing at least the first game, but you’ll be left with a few blanks.

The story centers around the history of the Psychonauts and a battle they had against their greatest foe, Maligula. The fight left one of them presumed dead and the rest wresting with their own various demons. Someone seems to be trying to bring Maligula back, possibly through necromancy, and that would be bad for everyone.

Meanwhile, Raz finds out that his official Psychonauts badge given to him by Ford Cruller is worthless and he’s bumped down to the level of intern. However, being the plucky psychic he is, he starts weaseling his way into the organization’s business in an effort to uncover the nasty plot and rub his fanboy all over his heroes.

As much as I love the game, my biggest issue with the original Psychonauts was its pacing, which just died around the halfway point. In that game, you roam around the summer camp interacting with an assortment of interesting characters, then that all gets shunted aside and you’re more or less left to complete the remaining levels without that delicious exploration to ground things. The level design is at its best in the latter half with memorable scenes like The Milkman’s Conspiracy and Lungfishopolis, but it loses what made it really special.

Psychonauts 2 avoids it for the most part. There’s still a point-of-no-return towards the end, but the balance between the exploration, character interaction, and platforming is a lot better. It perhaps coasts over the finish line but doesn’t feel like it putters out long before that like the first game.

There is a minor issue with the game having too many characters in the mix. They’re all pretty enjoyable — special shout-out to Dogen’s sister, Sam — with few of the campers from the first game returning in favor of a fresh cast. The finale is where the problem shows up. All these relationships cause a lot of loose ends, and many of them get tied up rather hastily. To be fair, I’d rather the fumbled rush to bring closure to everything than, say, a 90-minute cutscene where everyone gets their happy ending. Maybe I shouldn’t be complaining. 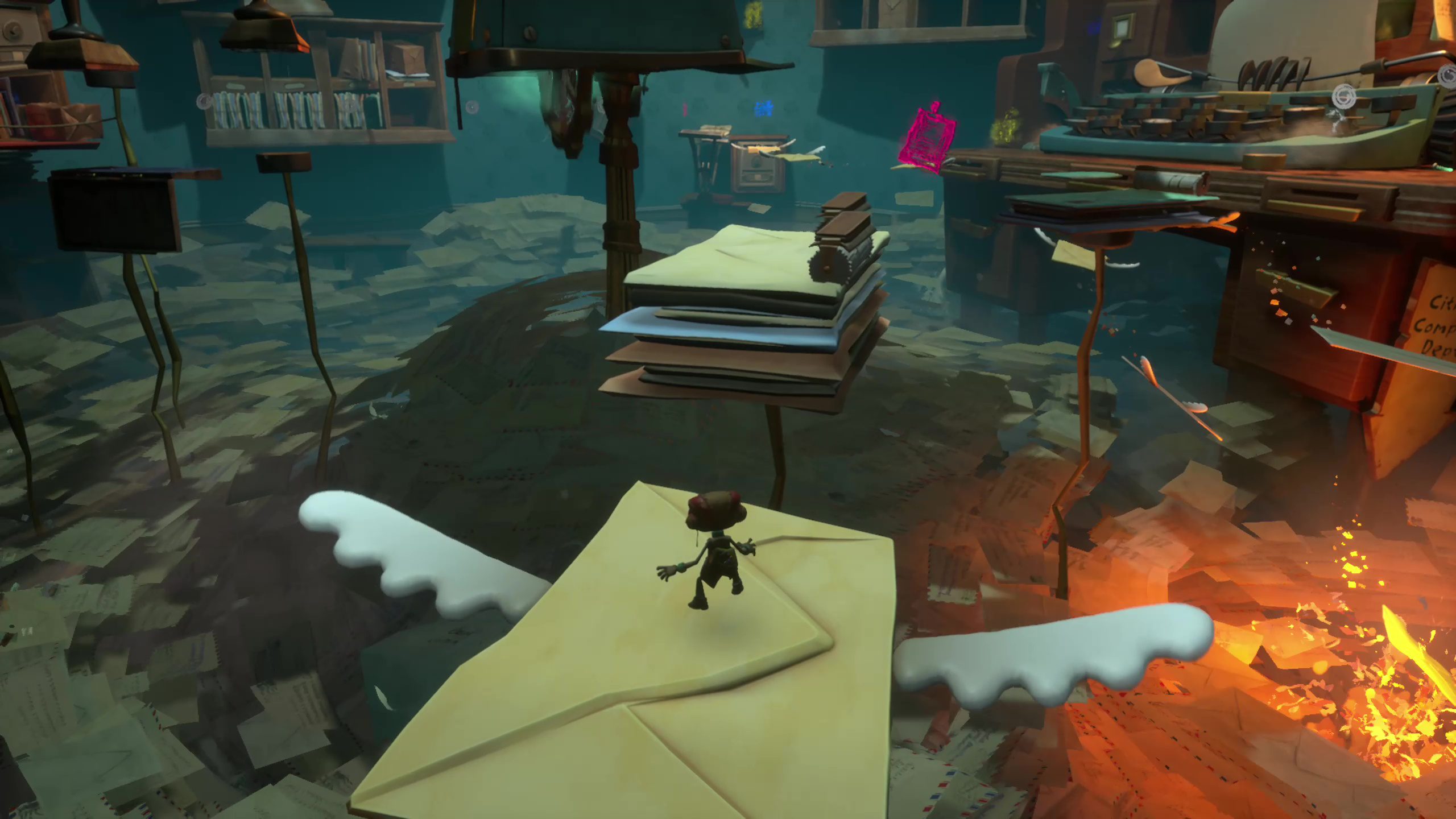 The platforming is solid. Largely, it plays a lot like the first game with the same movement mechanics still in place. Combat has seen an upgrade with a dodge button and a greater assortment of enemies. Boss battles are a lot more creative and interesting, and there are some memorable standouts in the mix.

In terms of level design, the big question is whether or not Psychonauts 2 matches the fantastic Milkman’s Conspiracy. No, it doesn’t. While that’s disappointing, the trade-off is that the levels are a lot more even in quality. They each have their own hooks and surprises, and none of them really drag behind the others. Many of them have an amazing sense of scale and make creative use of your powers.

The characters are explored by them as well. Their pasts, their demons, their insecurities. It would be pretty disingenuous if Raz could fix all their problems by fighting a boss, but mostly he just gives them the tools to deal with their own problems. Like an actual therapist. 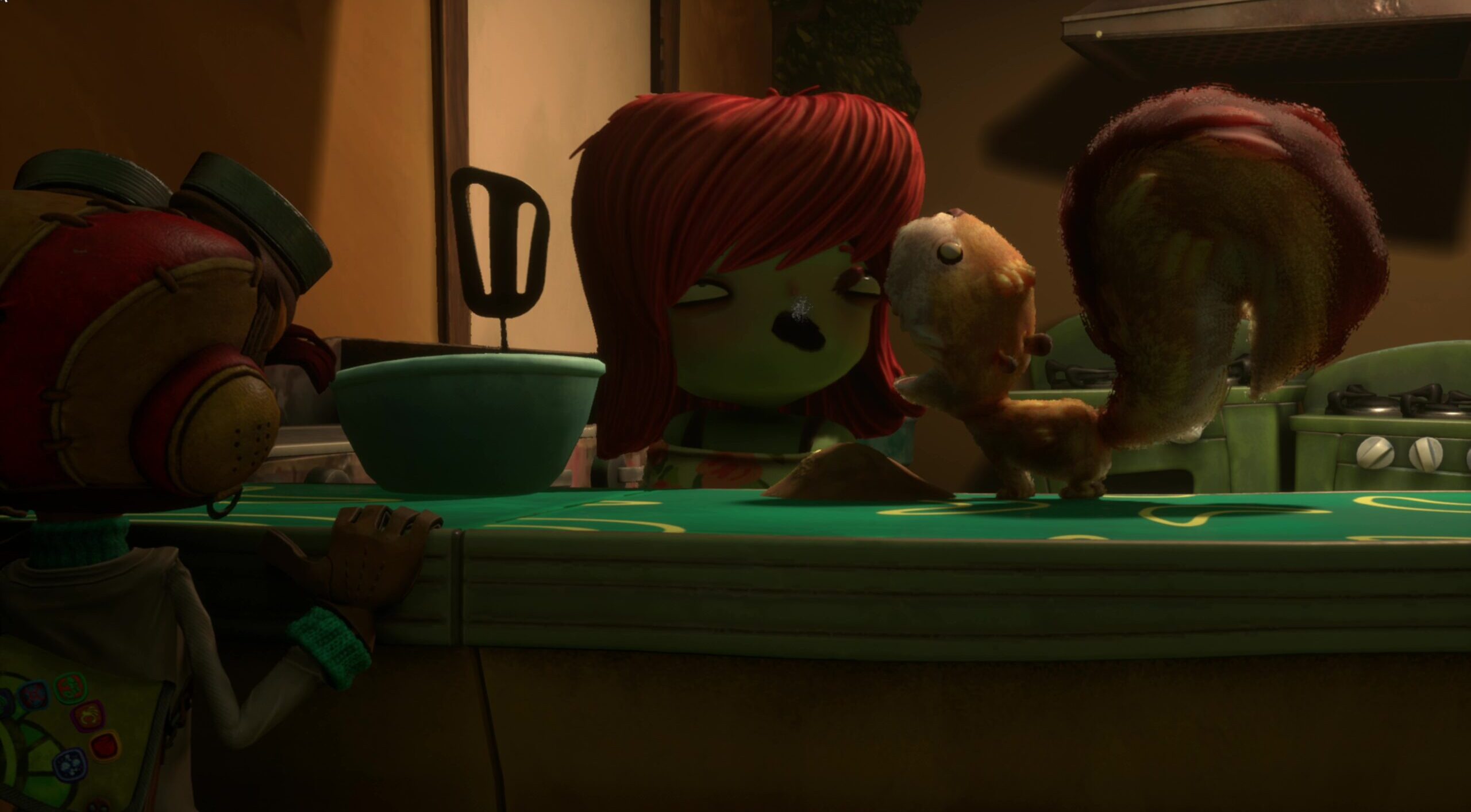 Psychonauts 2 covers a range of psychological disorders. Anxiety, gambling addiction, alcoholism, repressed memories, that sort of thing. A disclaimer before you start the game warns that the narrative may distress people with these sorts of afflictions. As someone who has their own struggles that are mirrored in the game, I didn’t have any sort of problem, but I can’t speak for everyone.

Ford Cruller’s backstory gets extra attention here. In the previous game, he was presented with a fractured psyche. One of the main objectives in Psychonauts 2 is piecing it back together again. You learn about his loss and regret, and he becomes more than just a quirky mentor. There are some real heartwrenching moments in there, and using it as the centerpiece is an effective move.

Not everyone is going to be down with all the collecting. Without naming everything, there’s quite a lot to grab in each world. Doing so levels you up and provides you with points to put into your various abilities. However, I didn’t find many of the upgrades to be necessary. I still spent too much time scouring behind every bush, but if you just want to get through the game, it’s not a requirement. 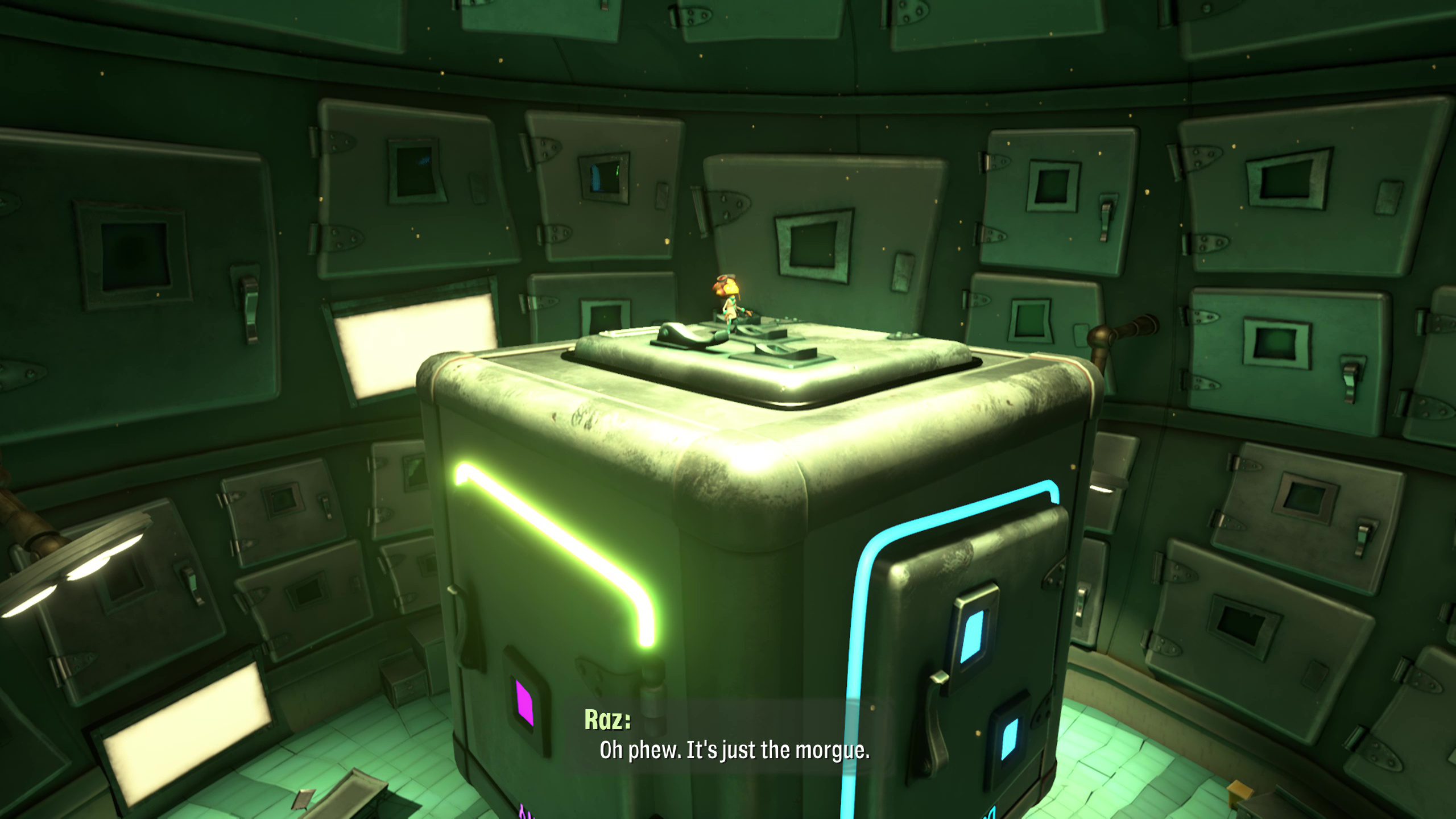 Psychonauts 2 doesn’t quite have the same punch as the first did. This is less because it’s an inferior title and more due to the fact that character building and storytelling have gotten better across the industry since 2005. A lot of young developers entering the indie sphere were inspired by Psychonauts, and you can see it reflected in many games across different genres. On the other hand, big-budget platformers don’t come around that often anymore, and Psychonauts 2 is assuredly top shelf. It maybe doesn’t reach the dizzying highs of the original, but it still manages to be a faithful and enjoyable follow-up.

A huge impact was left on me by Psychonauts. While that’s not likely to be the same story for Psychonauts 2, I wasn’t disappointed. There was no single place that let me down so severely that it soured the overall experience. Nothing that struck me as starkly inferior. It’s maybe not quite as genius, but it’s still a mind worth exploring.