It’s pretty rare to see a new 2D platformer series featuring a cute animal mascot, but with two games now under his belt, Prinny has officially achieved that status. It’s even more incredible when you consider Prinny’s origins. These little penguin demons hail from the relatively niche Disgaea series. They work as the game’s pawns: the weakest, most mass-murdered characters in the game. Most of gaming’s most well-known peons (like Bowser’s goombas) never get their own game, and if they ever do (like the Servbots in The Misadventures of Tron Bonne), they never get a sequel.

It just goes to show how charming and marketable Prinnies are. That’s one thing I can say for sure about Prinny 2: Dawn of Operation Panties, Dood!: it’s really charming. Sadly, along with that charm comes a mixed bag of a game. For some, it’s sure to be a new classic, while others will either hate it (like they hated the first game), or worse, forget it.

Check out the full review to see which camp you’ll fall into. 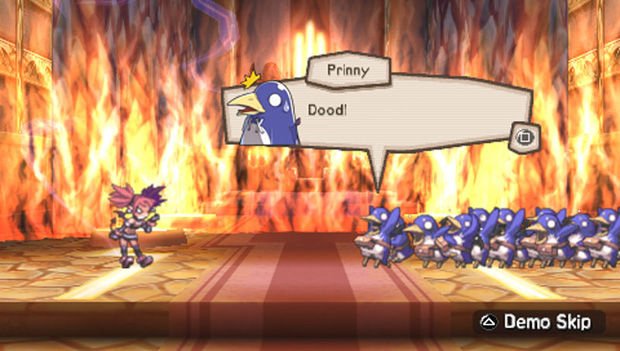 Like the rest of the game, the premise of Prinny 2 is very Japanese and very silly. You play as a horde of 1,000 Prinnies (one at a time) who all reside in the underworld. The Prinnies were once living beings, but due to their misdeeds in life, they are cursed to continue on as a weak and vulnerable form of a Prinny in the afterlife. They also say “dood” a lot. It’s much more charming than it probably sounds. All these Prinnies work under the rule of a tyrannical and mean-spirited demon woman named Etna. Someone has stolen Etna’s panties. The 1,000 Prinnies have to find them. If a Prinny dies, he never comes back, so you better not die more than 1,000 times, or it’s a permanent game over.

As I mentioned earlier, the Prinnies are one of the weaker enemies in the Disgaea universe. Like Arthur in Ghosts ‘n Goblins and Simon Belmont in the original Castlevania, Prinnies can’t change direction mid-jump. They can dash, but only after spinning in place for nearly a second (and if they spin for too long, they fall down). They don’t gain any power-ups, either. The closest they get to useful items is food: sweets that build their combo meter, and yams that make them fart to the point that they become airborne. 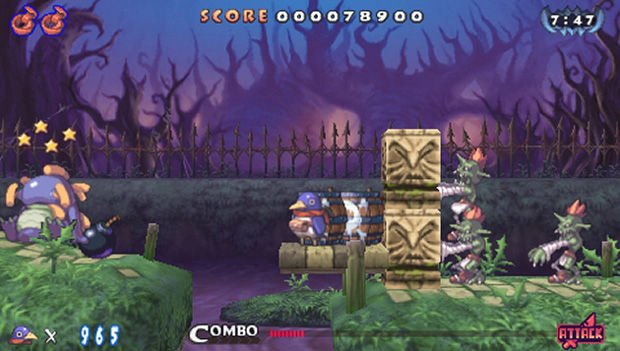 These and many other weaknesses cause Prinny 2 to fall into the the Super Meat Boy/Mega Man/Ghosts ‘n Goblins school of game design. You’re given a character who, on the surface, appears to have a fairly weak tool set to work with, and an unfair level of challenges set before it. However, with a little practice and skill building, your character can become a total badass. Levels that at once seemed impossible can be cleared without much of a scratch. It all depends on how well you utilize the tools you’ve been given.

Also like Super Meat Boy/Mega Man/Ghosts ‘n Goblins, Prinny 2 works to excite you by constantly forcing you into risky situations. The game’s combat system centers around encouraging risky behavior. Prinny has two basic attacks: a sword swipe (which can be done on the ground for a melee attack, or in mid-air for a projectile) and a flying butt-pound. Players will be initially tempted to stay away from that butt-pound, as it forces you risk getting close to enemies. Worse still, the butt-pound does no damage. 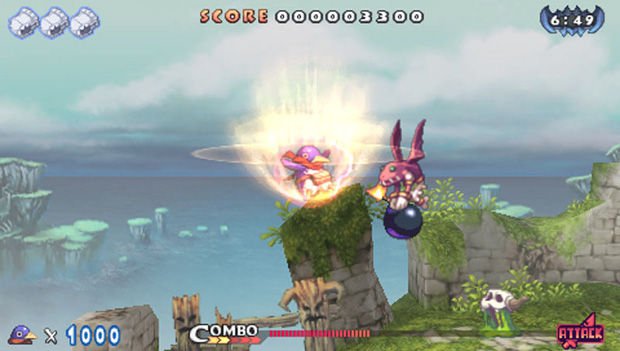 That’s what’s so smart about the game’s design. This seemingly useless attack is actually the most powerful move in the game, but only if used effectively. Against normal enemies, the butt-pound will cause dizziness and build your combo meter. It can take one to four hits to dizzy a boss (depending on the boss and what difficulty you’re playing on), but the end result will be the same. Only when an enemy is dizzy can you safely run past them, pick them up and throw them, or just beat the crap out of them. Beating the crap out of them also builds your combo meter. A full combo meter greatly increases the power of your regular attacks. Fighting Prinny 2‘s first boss without using the butt-pound (as I did the first time) might mean a 10- to 20-minute battle. Effective use of the butt-pound, along with the ability to mash the sword button with incredible speed, can cut that fight down to less than 20 seconds. In short, taking the “butt-pound risk” can pay off.

Sadly, overuse of this “butt-pound, attack, build meter, repeat” strategy does some damage to Prinny 2‘s depth. There are only one or two enemies in the entire game that aren’t best fought by dodging, butt-pounding, and then swiping your sword. It would be one thing if the game had a wide variety of power-ups, or if the levels were more interestingly designed, or if the platforming didn’t just feel like filler, or if there were something other than the occasional change-of-level gimmick or new enemy to keep things interesting, but Prinny 2 has nothing of the sort. Of course, dedicated players will find ways to force some depth into the game by using all of Prinny’s abilities (double jump, dash, etc.) to beat levels and bosses in record speed. That’s just extra credit, though. When it comes to the basics of what you’ll need to get through Prinny 2, “butt-pound, attack, build meter, repeat” is really all there is to it. 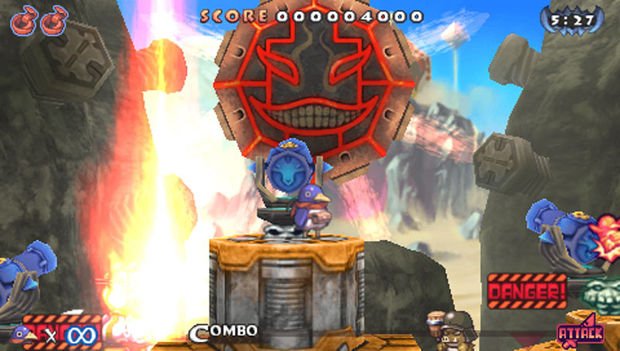 Weirdly enough, there’s actually a lot of depth in the game’s level select screen. Like in Mega Man, you can play the game’s first six levels in any order. The only levels that are set up in a linear fashion are the last few. Unlike in Mega Man, the levels get increasingly difficult and otherwise change things up depending on what order you play them in. Play the “Demonland” level first, and it will be relatively easy, with only one boss at the end. Play “Demonland” sixth, and it will be painfully difficult, with a double boss fight (not to mention nice Christmas decorations). There are also different collectibles depending on the order in which you play the levels. This variation does add to the game’s replay value, though admittedly, only die-hard completionists are likely to play through the main game more than once.

The game’s art and music are well-crafted, but lack a certain spark at times. The voice-acting is great, and the music is sweet and spooky in a Danny Elfman sort of way, but there aren’t a lot of surprises here. The animated sprite-based graphics are consistently beautiful, and the polygon-based backgrounds are serviceable. The downside side is that a lot of the assets are recycled from the first game, and the character design feels a bit uninspired. Generic samurai, Lolita-style anime girls, and chibi rip-off versions of characters from Darkstalkers and Castlevania are the general standard here, though there are a few ideas that feel fresh (like the corn-man missiles, the dragon sharks and the cell-phone-preoccupied ice goddess). That said, they all look great that it’s easy to forgive their frequent lapses into plagiarism. 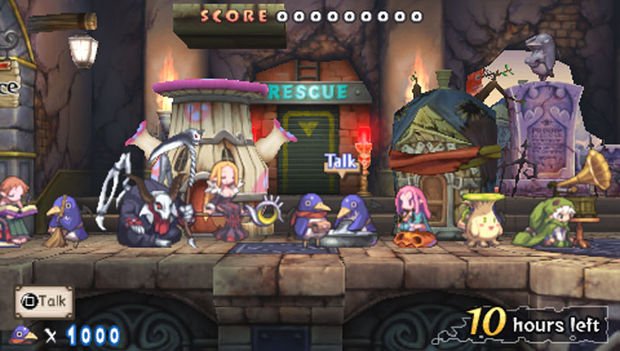 The only place the game really sinks into poor craftsmaship is, strangely enough, its camera. I was actually reminded a few times of the epically bad camera in Disney Epic Mickey, which is strange, seeing as how Prinny 2 is a 2D platformer. While messing up the camera in a 3D platformer is somewhat understandable, it seems almost impossible to mess up the camera in a 2D game, yet the developers of Prinny 2 have done just that. What’s even stranger is that the camera was also a problem in Prinny 1. In both games, the camera doesn’t automatically scroll quickly enough when you reach the edge of the screen, which will sometimes lead to you running or jumping into an unseen deathtrap. It doesn’t happen a lot — probably every other stage or so — but that’s more than enough to be frustrating, especially seeing that every death counts as the permanent end to one of your 1,000 adorable Prinnies.

On the plus side, the game has nearly endless unlockables. There’s a bunch of minor stuff to find as you play through the game the first time, and after you’ve beaten it at least once, you can unlock a lot of stuff, including two extra characters, a boss rush mode, and a bonus campaign that’s nearly as robust as the main game. This mode features a new character (who has access to many more moves and equipment), some new levels, bosses, a new storyline, and a new health system that revolves around being on a underworld TV show. In this bonus mode, you play for ratings. Each hit drops your ratings, and once your ratings drop to nothing, you’re “canceled.” It’s incredibly hard, but more importantly, much more varied and interesting than the main campaign in terms of gameplay options. If they toned down the difficulty to these bonus levels a bit, they would have made for a better primary campaign. As it stands, they still work as a great reward for those who enjoy Prinny 2 enough to see it through to the end. 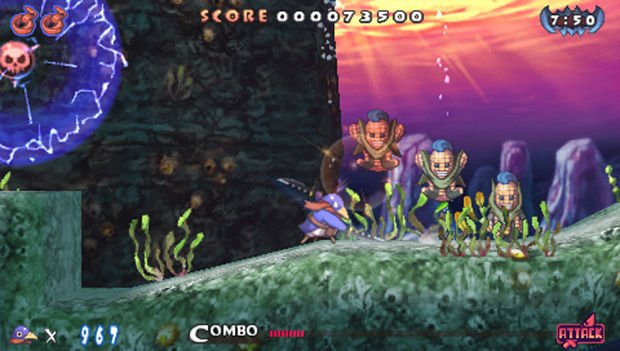 In a lot of ways, Prinny 2 seems like the perfect platformer for fans of Disgaea. Both require a love of grinding, the ability to tolerate some glaring design flaws, and a tenacious drive for perfection in order for you to fully enjoy them. Like with Epic Mickey, fans of the source material and the central gameplay hook will probably be able to look past the Prinny 2‘s many issues and call it one of their favorite games of the year. For the rest of us, there are a lot of better games out there that serve up a similar brand of 2D platforming and action, but without the bad camera and occasional bouts of monotony. Still, I’m glad to have played through the game. The core “risk a butt-stomp to score a dizzy” gameplay hook keeps things generally compelling, the unlockables and bonuses are a lot of fun, and most importantly, the Prinnies are impossible not to love. It’s a lot easier to play through a imperfect game when you’ve got an army of demon penguins calling you “dood” to keep you company.