It’s hard to talk about Pokemon Scarlet without talking about Game Freak. The developer has spent close to three decades now making Pokemon, from the Kanto and Johto days up to its latest generation set in Paldea. And while Generation IX has brought some really fantastic ideas, characters, and monsters to life, Pokemon Scarlet has an equally fair share of stumbles.

The new Paldea region draws inspiration from Spain and the Iberian Peninsula. It’s a gorgeous, varied region with a noticeably large and enigmatic crater at the center, dubbed Area Zero. As a new attendee at Naranja or Uva Academy, depending on your version, you’ll attend school and make some friends, while learning all you need to know about the world of Pokemon.

It’s not long before you’re sent out on a Treasure Hunt, an independent study that unleashes the academy’s students on the Paldea region to find their own treasure. This is an objective of their own making, and a journey of self-discovery that suits the new open-world approach of Pokemon Scarlet well. The world opens up before you, with three routes acting as guiding markers through the Paldea region. You can tackle the traditional gym structure, working up the talent to take on the battle-eager Nemona; assist Arven in finding rare ingredients with a hidden, meaningful purpose; or take down the bases of Team Star, this generation’s antagonistic crew that’s a bit more complicated than they seem.

The path opens up before you

All of this is wonderful on paper. I loved the open structure of Pokemon Legends: Arceus, a game that rekindled my fondness for the franchise fold after years of not playing. Where Arceus segmented the world off into zones, Pokemon Scarlet makes it one giant region that you can roam across. There might be dangerous Pokemon lurking ahead, or magnificent new biomes, or a shiny surprise waiting to pop out of the tall grass. And there’s still the classic Pokemon structure: turn-based RPG battles, monster collecting, and more. Pokemon Centers act as way-stations and rest stops, where you can craft some TMs, buy some Pokeballs, and heal up before setting back out. 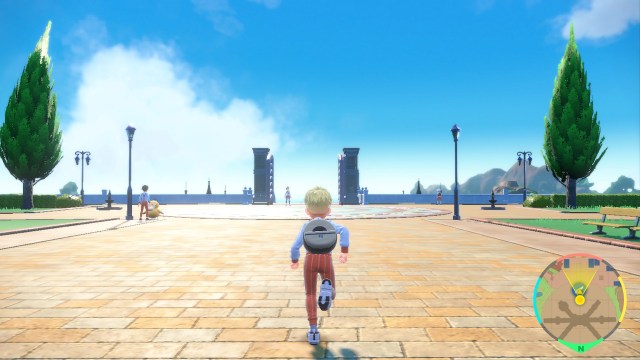 Mixing a more traditional Pokemon game with the open-world concept is ambitious. None of what usually clicks for Pokemon has disappeared though, and in some ways it’s been smoothed over. Auto-battling allows players to speed-train Pokemon as they run around the world, but big fights will still be the tense turn-based affairs. Terastalizing presents an interesting option, perfect for theorycrafts and Type chart aficionados, but it’s still beatable with good play.

This new open-world concept and the traditional Pokemon structure fits together well on paper, especially with multiplayer, where it feels like the Stand By Me allusions in classic Pokemon finally come to fruition. Being able to hop into a room with three pals and take on Tera Raid battles, put up a picnic and make a sandwich, or just play Pokemon in the same instance can be a true joy.

That’s all just in theory, though. In practice, it gets muddy. One major issue with Pokemon Scarlet is clarity. The game doesn’t make it clear what level any of the challenges are, and they do not scale with you. It is very possible to walk into a gym fight or Team Star raid that is well above your current power. Local Pokemon might help give you an approximation, but even then, I found some discrepancies, and some like the Titan Pokemon even felt like they outranked their neighbors.

Seeing Pokemon is another problem too. Pokemon Scarlet suffers heavily from pop-in, most noticeably with the Pokemon themselves. It wasn’t rare to walk along and watch as monsters visibly pop in, just a few paces ahead of you. And where Arceus felt like it managed roaming Pokemon well, often giving players a decent enough berth to flee and run, I frequently managed to stumble into battle after battle as Pokemon stood on top of my avatar mid-fight. Plus, random civilians walking into the middle of an active Pokemon fight. 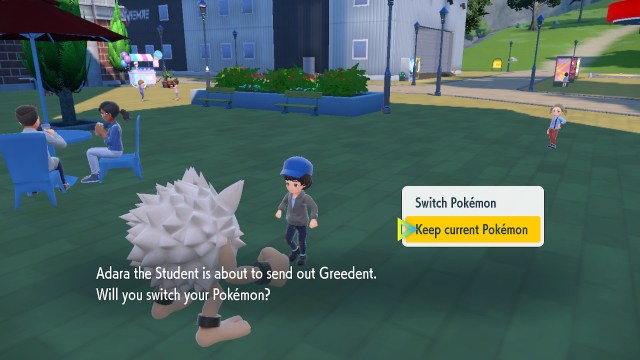 These visual concerns grow when the world itself looks bland, runs at choppy and inconsistent frame rates, and has frequent issues with clipping and other mishaps. Put simply, Pokemon Scarlet is messy in the tech department. On PC, it would draw comparisons to Early Access titles. And as the days have rolled on since launch, players have discovered more and more baffling issues, shared over and over on social media.

Which is incredibly frustrating, because underneath all that, Pokemon Scarlet is a very compelling Pokemon game. Clarity issues aside, the open-world structure worked very well for me. I loved charting my course and roaming around, marveling at new Pokemon in each new region. I could plan out my routes and know which areas I could tackle early, thanks to a strong Type advantage, and then sweep through an earlier Gym for an easy win. The new Pokemon in this generation are some real winners. I grew very attached to new faces like Baxcalibur, the Ice-Dragon kaiju, and Annihilape, the new Primeape evolution that was a staple of the squad that helped me roll credits. Plus, Koraidon is the absolute best, and is my awesome legs-not-motorcycle pal, even if I wish his glide didn’t drop off like the bad paper airplanes I made in elementary school.

In its narrative, Pokemon Scarlet finds some surprisingly good beats. The writing in Pokemon games doesn’t often feel like a draw, but Scarlet pulls off a solid blend of emotional moments, comedic gags, and heartwarming tales.

Nowhere is this more prevalent than in its last section, unlocked after completing the three main routes. Not to discuss too much of that here for those who want to stay unaware, but this final section does some incredible things. It’s got a different structure than usual, mixes in some really impressive visual and audio choices (the music in Pokemon Scarlet is absolutely fantastic), and pulls a few surprises that land well. 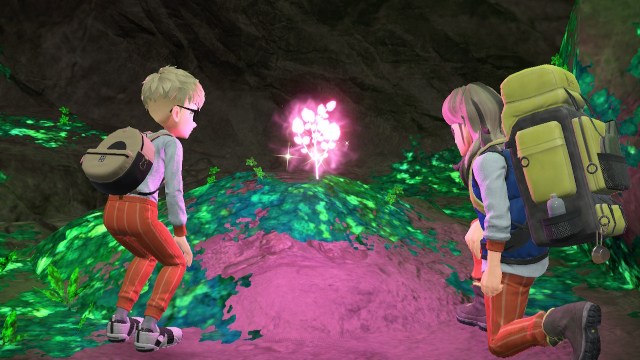 It felt too short and too late to shift my feelings on the game too far, but it stands as an intriguing blueprint of what Pokemon could look to do in the future. This finale felt like it made the most of a wide-open area, well-developed cast, and careful, precise lore dives to make a final dungeon stand as a more-than-worthy finale.

But that’s the asterisk, and the asterisk is always the problem. It’s the “but” inserted on the end of a recommendation. And Pokemon Scarlet has a lot of asterisks. 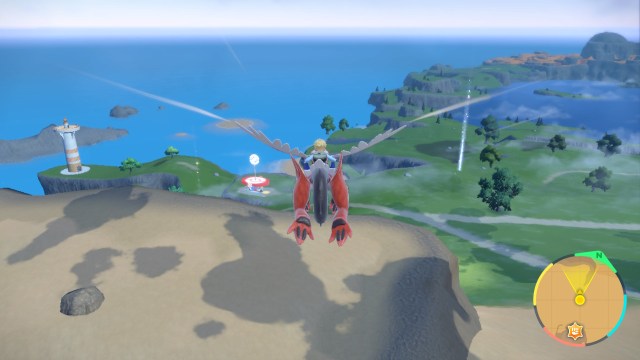 It’s a fun open-world structure with clarity issues. There are great battles, marred by technical shortcomings. I love to play multiplayer, even though I’ve experienced bizarre locks and multiple crashes doing so. It feels bad to throw a Pokeball compared to Arceus, like going from a good shooter to a bad one. Pokemon Scarlet repeatedly presents me the question: “How much can I enjoy a game I still find significant fault in?”

And that’s honestly the question most players, or at least those who haven’t bought it yet, will have to answer for themselves. But it’s one I hope Game Freak doesn’t keep posing to me. I’ve already lamented to friends that an improved version of this could see what I love about the Paldea region realized better. The gorgeous water walls of Cascaraffa, the frigid mountains, and the resplendent northern lighthouse, home to a Star Base, are great fun to run around in. But they’re marred by technical issues and general clunkiness.