One of the big challenges of getting a competitive free-to-play game just right is making sure it never feels like someone can simply pay-to-win. As a person who isn’t totally against buying a microtransaction or two, I want to make sure that it’s skill, determination, and perhaps a little luck that decides the victor, not who spent the most cash.

Pokémon Duel sits right on the bubble of feeling quite unfair to anyone who doesn’t care to pay up, but launch issues have kind of evened the playing field. 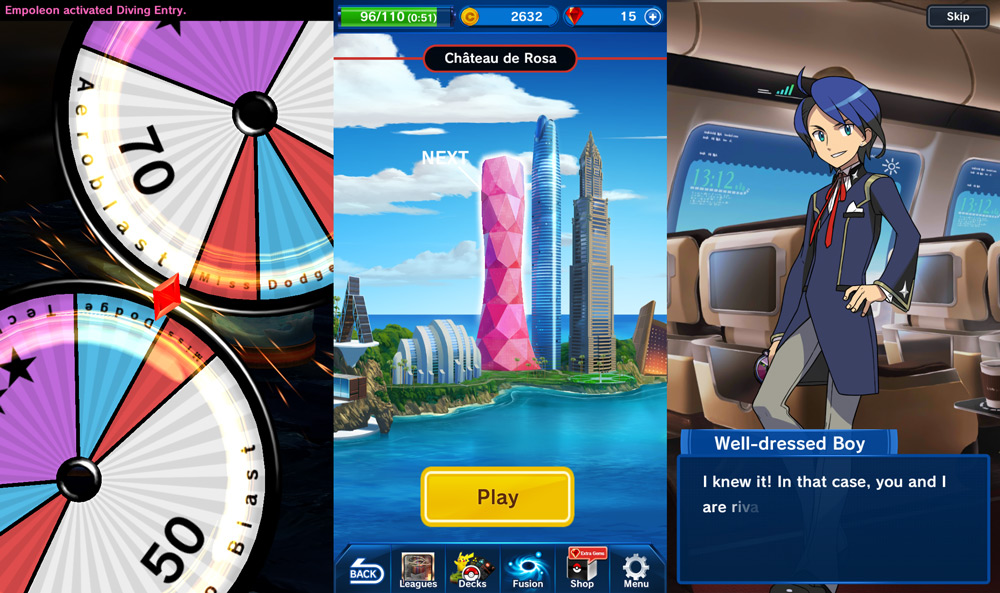 Pokémon Duel is a figure board game that looks to be modeled after the Pokémon Trading Figure Game, something I didn’t know existed until it was brought up in the comments section of the story announcing this game’s release. In Pokémon Duel, you have a deck of six figures and the goal is to get one of them to your opponent’s flag. Each figure in your deck has a set number of spaces it can move and you can only move one figure per turn. Combine those limitations and variations with the unusual layout of the board and you have a recipe for some truly compelling strategies, as well as some laughably idiotic ones.

Stopping your opponent from reaching your flag requires you to either block them or fight them. These battles require zero skill as victory rests in the hands of a spinning wheel. You and your opponent will try and stop the wheel on the strongest attack. There are four different types of segments on the wheel, each with its own strengths and weaknesses. Blue segments activate a dodge or block maneuver, white and yellow attack, landing on red means you miss and can be knocked out, while purple activates a status or special move. Attacks and special moves have their own individual scores and those with the highest scores win. The strengths of these moves and status of your Pokémon can be augmented with the use of plates.

There is a great variety of the types of moves that can be on each individual figure’s wheel. My Mew for instance, and I’ll touch on how the hell I got a Mew so quickly in a moment, has a dodge called Vanish. When my other characters dodge, they remain in the same spot they are in. When Mew dodges with Vanish, it flies back to the bench. There are also moves that put figures to sleep, paralyze them, and let you hop over your opponent, which can make for an easy victory. 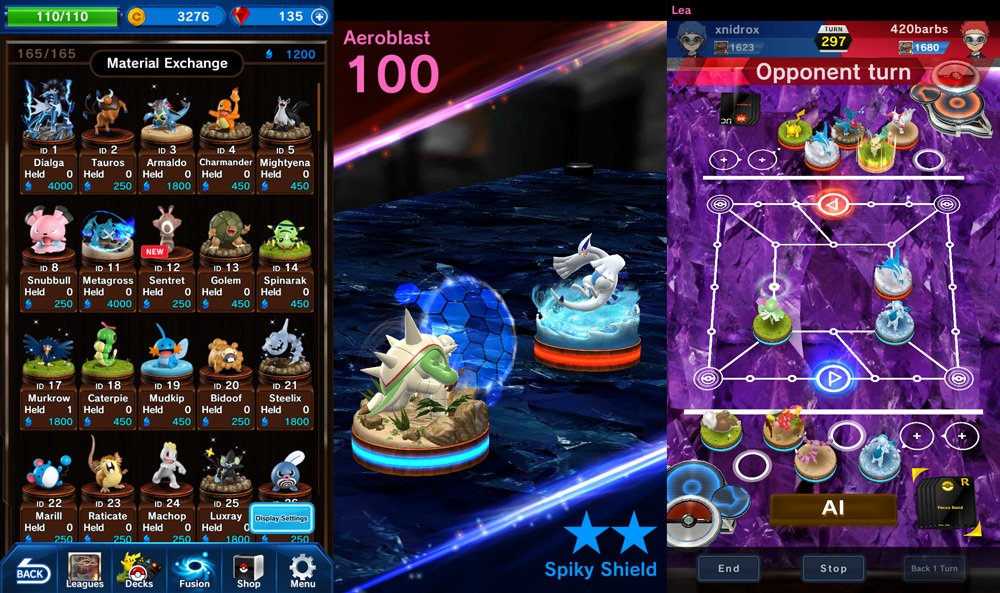 As a free-to-play game, it mimics the setup used by Clash Royale, a game from last year that captured my attention for a good week or two. Duel allows you to play the main game competitively as much as you want, but rewards are tied to timers. Wait times depend on the potential value of the objects inside each booster pack with some taking up to 12 hours to unlock. Each victory in the competitive mode nets you a booster pack and three booster points, while a loss gets you one. Collect 10 of these booster points and you can unlock a timed booster pack.

Of course, you can always just pay to unlock the booster packs which is the perfect segue for discussing the many, many tokens found in the game. For starters, as I’m sure you’re used to by now, there are gems. These can be earned in-game or purchased with real money. Gems can be used to buy booster packs that contain figures, plates, metals, materials, and cubes. Cubes and metals are just two of the objects you can use to upgrade your figures with the Fusion feature. Materials can be collected and used to purchase individual figures. Then there are coins, which cannot be purchased directly but can be earned various ways in-game, like selling characters you don’t want from booster packs. Coins are spent when you fuse figures with cubes, metals, and other figures to make them stronger.

There’s a lot to take in, and not all of it is properly explained. If you’re not planning on spending any real money, be prepared to wait. Each booster pack you win in battle takes time to open and you can only open one at a time. You can also only hold three of them at any time. The timed booster pack I mentioned above quickly set itself on a 12-hour timer, meaning any battles I win while it’s on that countdown don’t apply to the opening of my next timed booster pack.

Instead of waiting or continuing to play with little reward, there is a full story mode buried in the menu, complete with AI battles, plenty of opponents, and an energy meter that feels pretty fair for the first several towers. The plot is your standard Pokémon affair, complete with a child that pegs you as his rival the second he meets you. The goal here is to defeat the owners of nine hotels, ultimately winning ownership of the giant Jewel Tower on Carmonte Island. 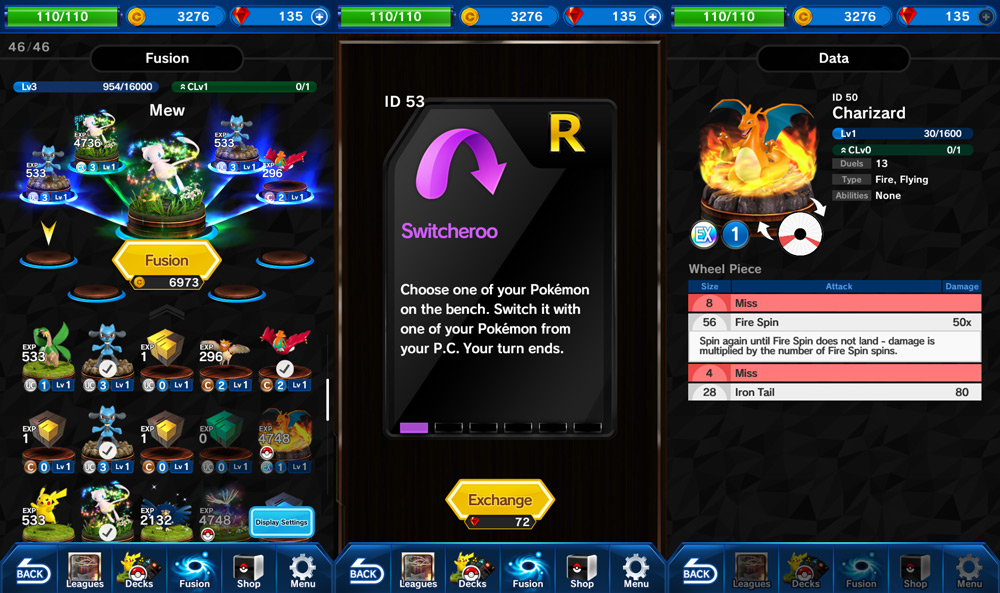 The campaign is a nice addition, and I genuinely had fun with it. It may not exactly replicate the excitement of playing against a real person, but I kept being pushed back to it when my online victories ceased to net me any rewards. The timers on the won booster packs are a brutal buzzkill to the excitement of competition, as is the app failing to load and not letting me compete at all.

I know what you’re thinking: What? A mobile Pokémon game requiring a consistent internet connection is having issues at launch? Shocking as it may seem, Pokémon Duel hasn’t had the smoothest first couple of days. The program has gone down, blocking access of any kind. Maintenance has felt like a near daily issue and connecting to an opponent has been real spotty at times since I first downloaded the app.

To help alleviate these issues, it seems the Pokémon Company just keeps giving people gems. I’ve received around 900 gems in the first couple of days. I’ve spent those gems on booster packs and now my deck is stacked with incredibly strong figures that some opponents don’t stand a chance against. EX figures like Mew, Charizard, Raikou, Latias, and Rayquaza, which are supposed to be the rarest figures in the game, came fast and easy for me. These figures tend to have the smallest “miss” segments on their wheel and the strongest attacks, so it was an obvious choice for me (and many others I’ve come across who’ve received the same windfall) to abandon most of my starters for these over-powered figures. That’s not to say you can’t beat someone who only has legendaries while you’re still working with your original line-up , it’s just that when it comes time to do battle, the odds will be more in their favor.

This brings me back to what I said at the beginning of this review, how I thought Pokémon Duel was on the bubble of being unfair to people who don’t pay. I can strategize, plan ahead, and pounce on my opponent’s mistakes and have a great amount of fun doing it, but I have no doubt that my continued success can be attributed to the cavalcade of legendary figures I’ve received from the avalanche of gems that keep coming my way. You need skill to win, but when someone can just spend as much money as they want on booster packs and leveling up their figures, skill may only be able to get you so far.

[This review is based on a retail build of the game downloaded for free off Google Play.]