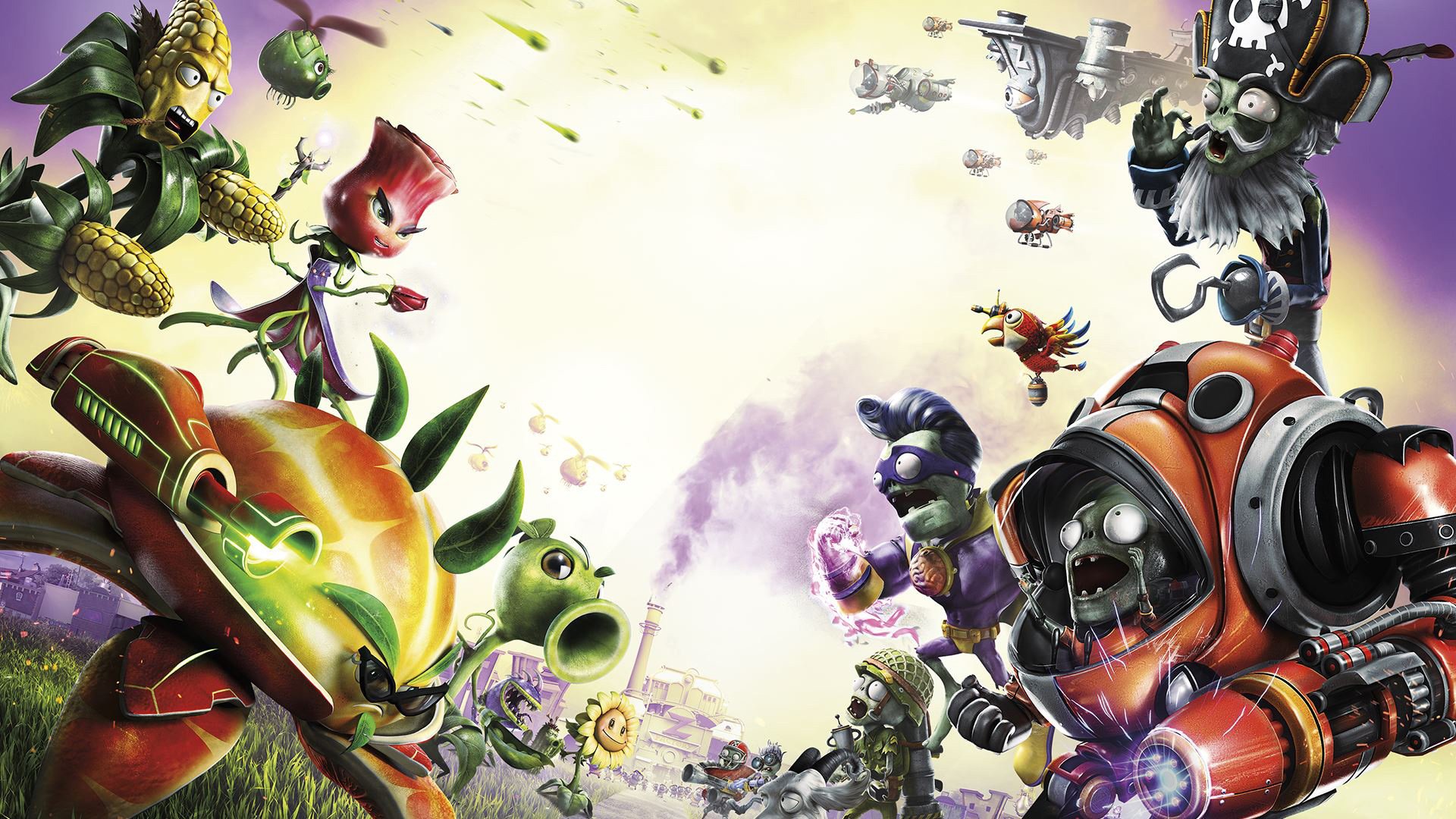 Chris and I were thinking about holding a fight to the death to determine which of us would get first dibs on Plants vs. Zombies: Garden Warfare 2, as is the traditional way to end internal kerfuffles at Destructoid, but we called it off at the last minute.

We realized we could both do the review, together, and I wouldn’t have to die.

Chris: Can I just start by saying how surprised I am that EA didn’t waste this franchise’s potential? I’m shocked that PopCap, creator of those classic browser games I played in networking class in high school, ended up crafting a shooter this good.

Because to me, Garden Warfare 2 immediately steps on the shoulders of the strong foundation the original built. It keeps everything people loved about the first, and expands upon concepts that needed to be addressed. For instance, the hub world turned out well. It’s great that after a quick five-minute tutorial you’re able to not only choose your character right away, but your faction as well. I ended up messing around in it for several hours before I even remembered that this was primarily a competitive multiplayer game. Mission accomplished, as far as solo players are concerned.

Jordan: Absolutely. The hub world is a far more realized slice of the wider Plants vs. Zombies universe, and it’s so delightfully odd. Similar to you, I expected to head straight into the standard multiplayer modes after transferring my character unlocks from Garden Warfare (which worked flawlessly), but instead I ended up spending the first several hours running around the open world in search of quests, mini-games, and collectibles. The plants and zombies have their own base on opposite ends of the map, and there’s this eternal conflict in the middle. I can’t tell you how many times I got swept up in that escalating fight.

The first game excelled as an online multiplayer experience, but it didn’t offer much in the way of engaging, long-lasting single-player content. This time, you can team up with or compete against some surprisingly competent AI bots, and better yet, there is also a proper storyline for the two factions. The missions are varied — one had me dropping bombs from a living corn airship, while another involved shrinking down to fight plants inside of a sick shark — and they do a good job of introducing the six new character classes.

I’m not sure if I have a favorite newcomer, but Super Brainz is a contender. Aside from his fabulous head of hair, he has this fun mix of ranged and melee attacks. Also, one of his abilities is essentially a Hadoken. Bless you, PopCap. 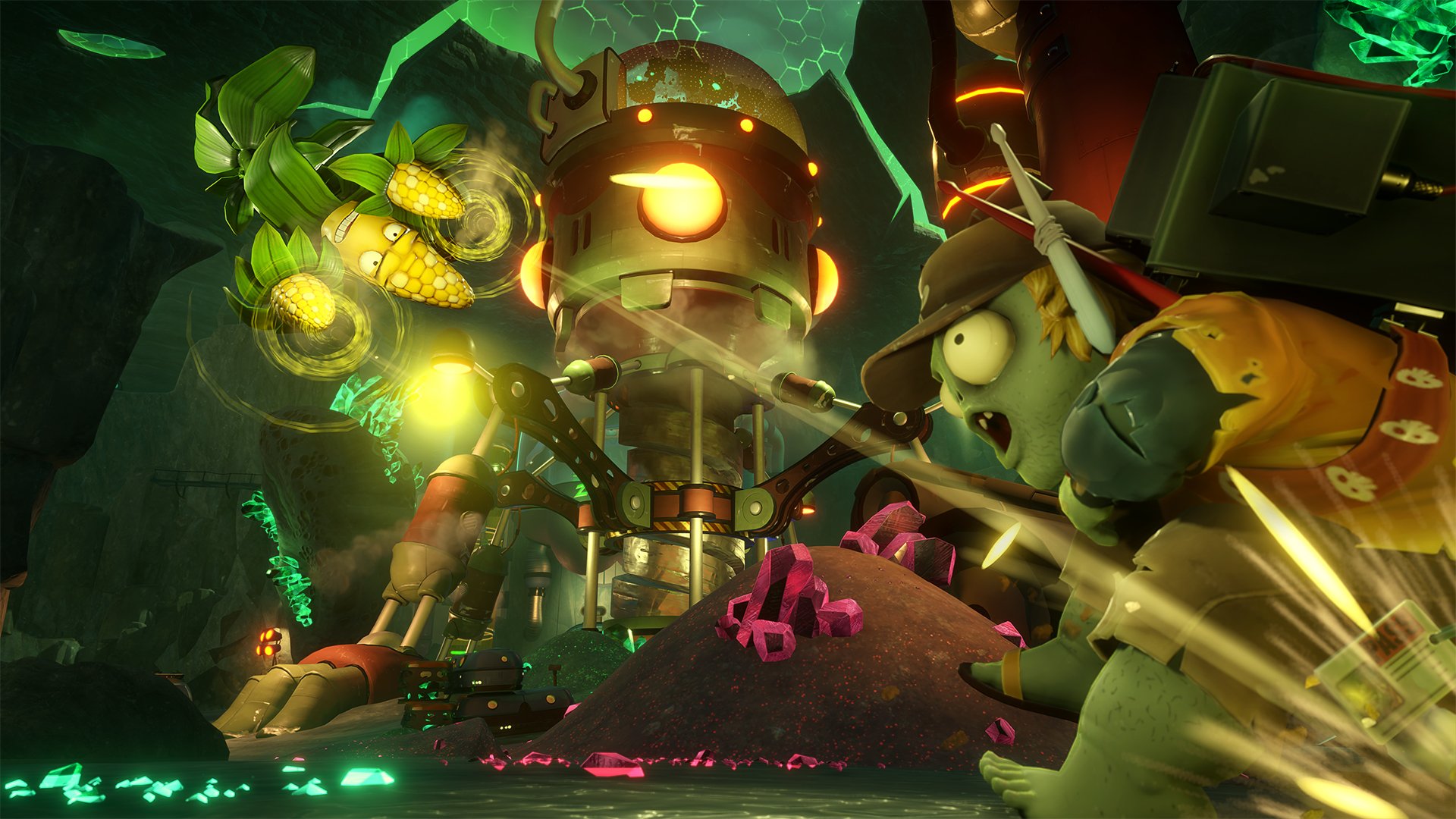 Chris: I think my new favorites are Kernel Corn and the Imp, for plants and zombies respectively. I dig Kernel’s air strike ability, as it adds a new dimension to the game strategically and the fact that so many levels are built for it (read: indoor objectives often cleverly have holes in the ceiling) is great. As for the Imp, the risk-reward playstyle is constantly entertaining. You’re completely open as your base class, but once you hit that mech call-in cooldown, you’re in business. The new classes inject so much personality into Garden Warfare 2, on top of all of the base ones that are still in, and the multitude of subclasses that divide each core playstyle. It was fun picking it back up online and wiping the floor with people in the first multiplayer session — like riding a bike again after a few years. We went 5-0!

To speak to your praise of the hub world, the multiplayer arenas are also even more stylized than before. Missions might start with a “capture or defend the point” conceit, but they culminate in really wacky conclusions that suit the series well. Like the one where you’re ruining a zombie graduation party by painting over murals on the wall, or playing a giant competitive pinball game. I don’t think this franchise gets nearly enough credit for how unique it is. If you’re looking for a shooter that isn’t portrayed through a prototypical lens of brown, this is it.

As for my time with split-screen, I’m bummed that you can’t do quests or go online on the same console, but local play has been improved to the point where both players can earn their own rewards, and the entire hub and Garden Ops are technically available. It’s…enough, and the ability to choose opposing sides and essentially play a 1v1 rumble in the hub is cool.

Jordan: Yeah, the pinball finale was unexpected. I spent most of my time in the original game with that mode, Gardens & Graveyards, and I can tell it’s going to be the same for Garden Warfare 2. With a decent matchup, there’s rarely a dull moment. I’m glad that in some of the maps, the zombies are on the defensive for a change. That needed to happen. All of the other returning competitive modes were seemingly left as is, but I don’t mind. Gnome Bomb is the only one I’m tired of playing.

Another thing I was happy to see altered is the way player progression works. You no longer have to worry about completing uninteresting challenges or using an annoying-to-obtain currency to bypass them. Instead, you just earn experience points by playing any of the modes as you normally would. The 100+ character subclasses level up independently, and there are unlockable upgrades like an increased zoom distance and faster health regeneration.

More than any of that, though, I was pulled into the optional quests. They boost your XP multiplier and give out stars, which are hard to come by, or coins. Because I didn’t know any better, I carelessly spent all of my stars on cosmetic rewards only to later learn that you need them for the post-game survival mode, Infinity. I don’t want to spoil who you go up against, but it’s super weird. And tough! Your first attempts at Infinity are free (one for each faction), but I’d still recommend setting aside stars for reentry.

As for the coin economy, payouts vary based on the mode, who you’re up against, and how well you and your team performed. As an example, I took home around 6,500 coins in a seven-minute round of Vanquish Confirmed against the AI on the hardest difficulty setting. The pricing for card packs in Garden Warfare 2 ranges from 2,500 coins for an assortment of one-time-use defensive items like potted plants or zombie turrets all the way up to 75,000 coins for a guaranteed character variant.

It feels like I’m earning coins quicker than I was in the first game, but it might just be that I’m enjoying myself even more this time around. Either way, I suspect I’ll be hooked for the rest of the year.

Chris: Same goes for me. It has a Warriors level amount of content to wade through and I’m completely fine with how the coin system works. Now that you can earn them with nearly every mode, they don’t feel like a grind. The defensive zombies remark is spot-on, and I love some of the new futuristic defense systems they’re able to utilize now — it gives them more parity with plants so the game truly feels like a 50/50 split. The first game was very plant-centric and zombies fans will have a much better experience. I’m still a plant man though, and you can quote me on that.

Jordan: And there it is. The truth comes out. Naturally, I’m a zombie guy, so we need to be sworn enemies until I invariably grow tired of playing as the still-kinda-cheap soldier class with the crossbow and switch sides.