Do it for Matt Damon

Planet Zoo captures the spirit of Zoo Tycoon in a way I’ve only dreamed of until now. It’s the zoo simulation I’ve waited 15 years for someone, anyone, to nail. Frontier Developments pulled it off.

I wasn’t necessarily the target audience for Planet Coaster, the studio’s last major sim game, but I’m so thankful the developers were able to get it made, listen to players’ concerns, and work out some of those kinks; Planet Zoo is undoubtedly a better management game for it. This isn’t a hasty animal-themed version of Planet Coaster, but there’s clear overlap between the projects. Lessons were learned.

If you’ve longed for a video game that lets you imagine and then build your own international zoo from the ground up – from “painting” terrain, to researching species, to orchestrating breeding programs and conservation efforts, to custom-designing cave shelters rock by rock – then you’re in the right hands.

I can’t stress enough how happy I am this game even exists. 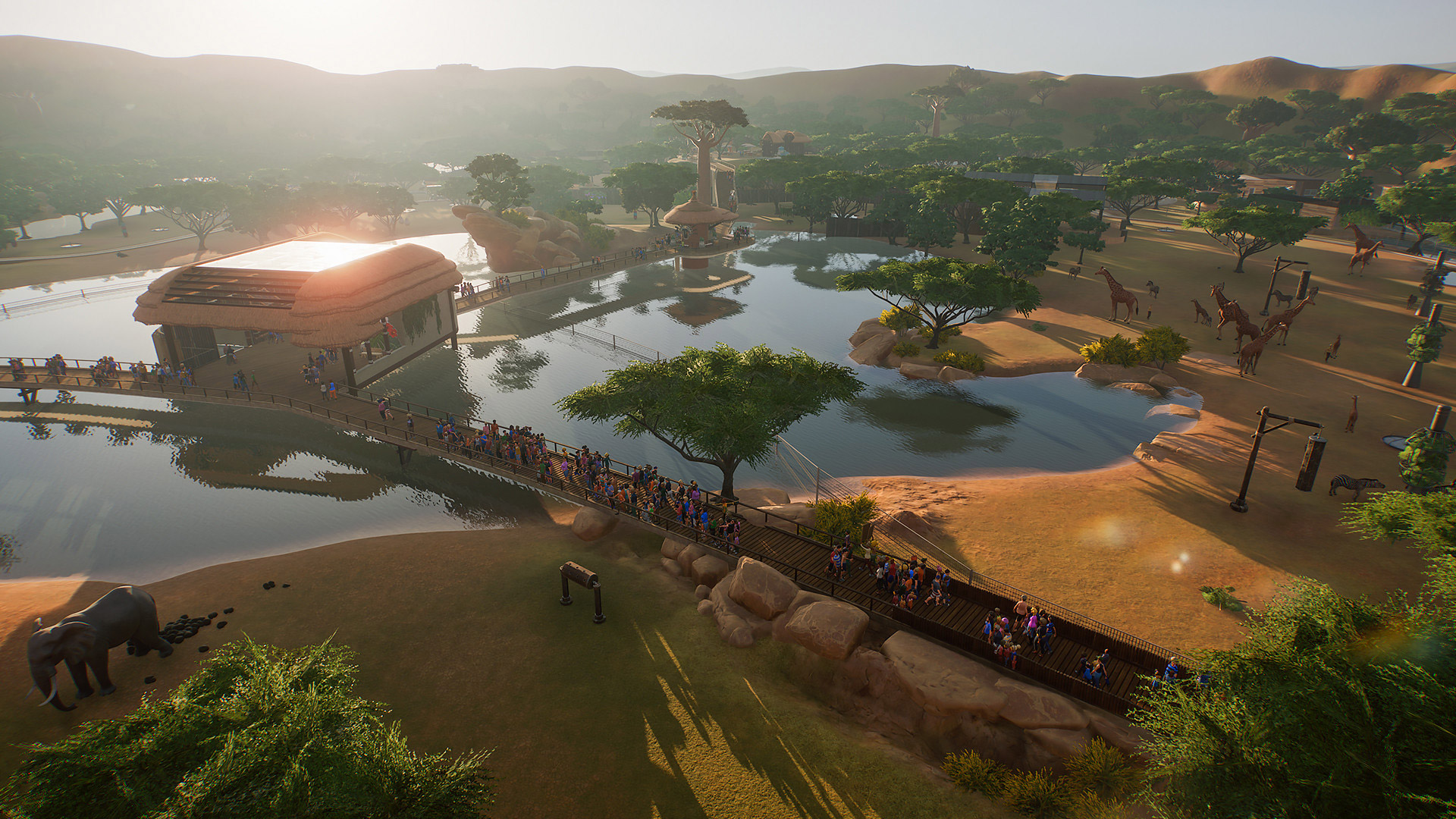 It’s worth noting up front that you don’t need to have prior knowledge of Planet Coaster to enjoy Planet Zoo, but if you do, you’re going to have a smoother early-game experience. For everyone else: don’t gloss over the campaign. You might be tempted to toy around in the Sandbox mode and spend infinite cash creating the most decadent zoo the world has ever known, but you’ll soon learn success comes gradually, and deep-seated problems can stay hidden for decades before bubbling to the surface.

The story – the thing I was most concerned about coming into Planet Zoo – is worth playing. Matter of fact, it’s probably my favorite part of the game. That, in and of itself, is an accomplishment.

There are 12 Career missions, complete with voiced characters, plot development, and varied gameplay objectives and map types to teach you the ins and outs of zoo management (and also entertain you while you’re learning). As you fix up parks across the world, you’ll eventually have to deal with a new boss: an evil hedge fund manager. This may be a simulation game, but it knows when to get cheeky.

Each mission has its own bronze, silver, and gold goals to clear. Sometimes, you’ll strictly need to worry about animal welfare. Other times, funding, guest satisfaction, and education are your most pressing metrics. While you only ever need to earn bronze to unlock the next area, you’re still looking at a good hour-or-two investment just to satisfy the bare-minimum requirements. Career mode rides a fine line between forcing you to stay vigilant as a manager and not overwhelming you with too many demands.

If you tend to prefer structured campaigns in sim games, you’ll have plenty to latch onto here.

Aside from the Career and Sandbox modes, there’s also an online-only Franchise mode – in which you run a whole suite of interconnected zoos and trade animals with others – plus the offline equivalent, Challenge mode, in which you can try to meet ongoing goals. Planet Zoo is pretty well-rounded.

What goes into designing a typical zoo, though? What’s it actually like to play Planet Zoo? No matter how many habitats and exhibits I build, I always seem to neglect something on my mental to-do list.

Before I even think of building a single wall, I like to see what animals are available right here, right now. I also like to read up on their Zoopedia file for clues on their specific needs – including land, water, climbable surfaces, temperature, terrain, foliage, and group size – as well as their conservation status.

If you’re familiar with Zoo Tycoon, imagine that same general gameplay structure – plopping down appropriate plants, raising and lowering the elevation, painting the terrain just right so animals aren’t stressed out – but with modern graphics, more sim elements, and piece-by-piece customization. In the interest of getting this review done on time, I tended to go with utilitarian designs, but it’s possible to mimic complex real-world zoos if you have patience and aren’t afraid to dig into sub-menus. You can even save groups of objects as blueprints that can be shared and downloaded on Steam Workshop.

There are a bunch of other considerations to keep track of, too. You’ll organize a staff of caretakers, keepers, mechanics, security guards, vendors, and vets to, among other things, help make sure:

The list of Management Stuff stretches on and on, but I should also highlight education, as that’s a surprisingly integral part of Planet Zoo. To earn money, you’ll need donations, and to get your guests to care enough to empty their pockets, you’ll have to teach them about the animals they’ve come to visit.

Television screens, conservation boards, and speakers all play a role in your zoo’s education rating. They can quickly (and rather painlessly) be hooked up to display info about a particular species, but figuring out where best to place these items – especially donation boxes – takes a lot of experimentation. 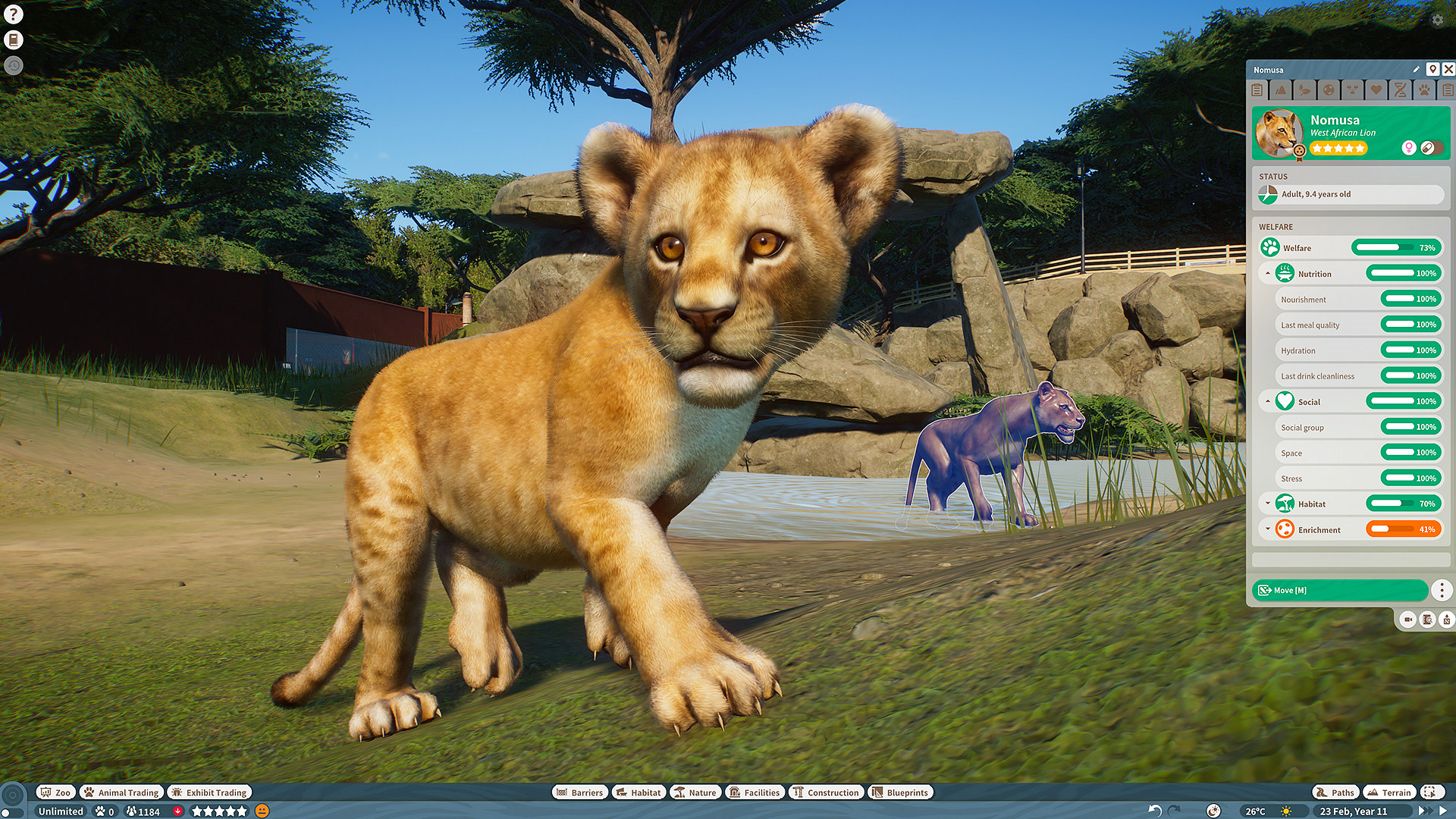 Let’s get back to that point about needing to check on animal availability.

Planet Zoo uses an Animal Market – a list of species that’s constantly in flux as animals come and go. And there’s more: age, gender, and genetics are factors. One bonobo might be big, robust, and immune to disease, but if it has a dreadful fertility rating, I’m swiping past. I know, I know – I’m a monster.

In the marketplace, you’ll spend either in-game money or conservation credits, the latter of which can be accumulated in a few ways, like releasing healthy animals back into the wild. The better the specimen, the higher the price tag it’ll fetch on the Animal Market. The more critically endangered a species, the more credits you’ll earn for releasing them. You’re not meant to be a psycho hoarder.

At one point, I decided I had to build a Himalayan brown bear habitat, because, well, they’re cute – but I couldn’t for the life of me find a suitable male. So I left my female in storage indefinitely, worked on another enclosure, and kept checking back in to refresh the market list. If you’re playing online, you’ll see animals that other players decided to trade away. Otherwise, you’re at the mercy of the algorithm.

This system can be frustrating when, for instance, you want a pangolin right this second, but it’s in service of a larger feedback loop, and I can’t argue with the results. (I just wish the UI was a little snappier.) The idea is to discourage players from building an ideal habitat, raising their animals’ various welfare stats high enough so they’ll want to breed, and running the game on fast-forwarded autopilot forever. That approach might work in the early years, but long-term, you’ll run into genetic issues. 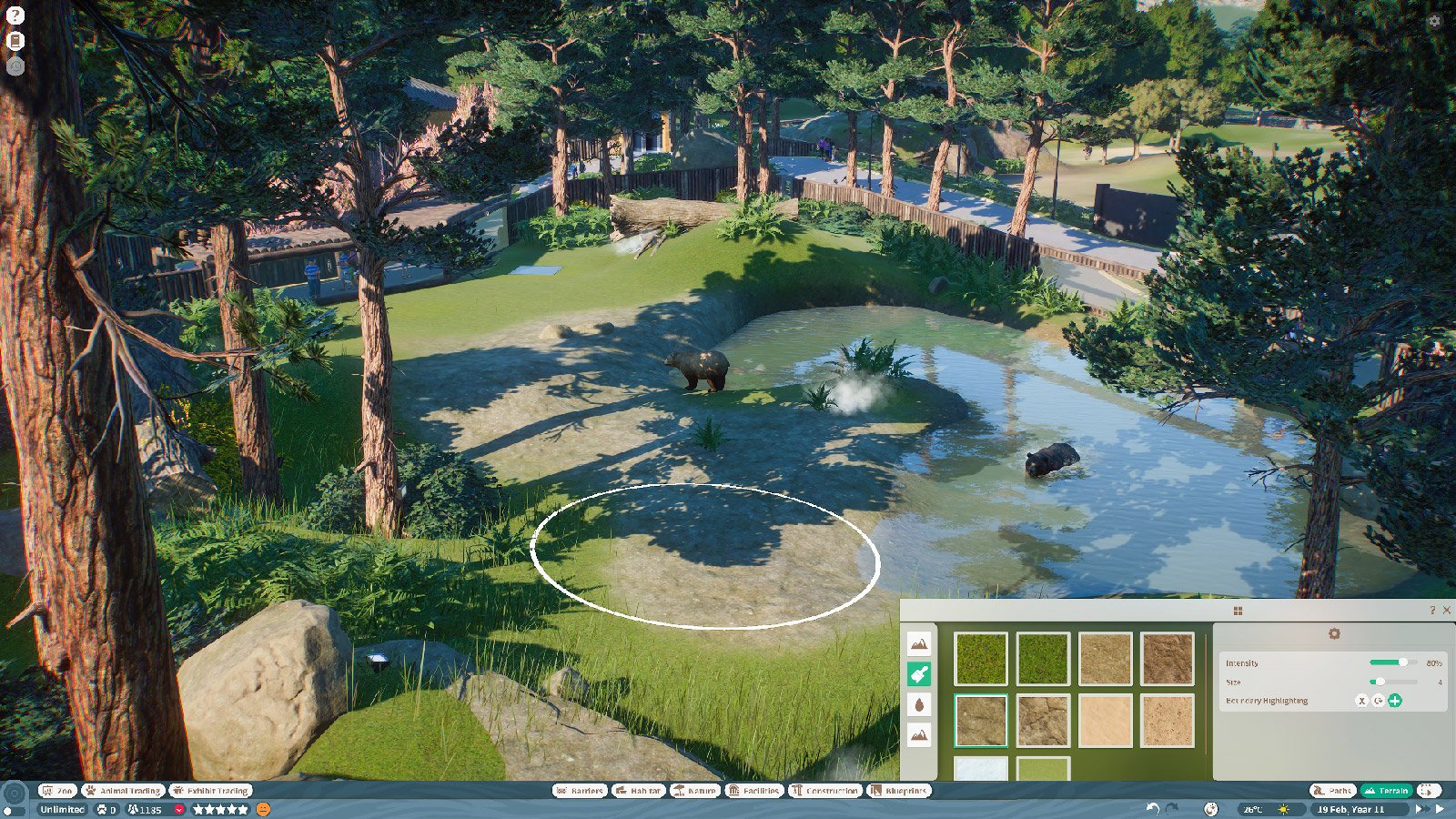 At this point, I’ve sunk a good 40 hours into Planet Zoo, and I’ve reached that point in every simulation game where you know the common pitfalls and how to deal with them, but you still have some time-saving tips and tricks to pick up. With that heightened awareness, the experience isn’t as fresh as it was while I was still exploring, but it’s also not rote, either. A major part of that success can be credited to the animals, which look, sound, and behave authentically enough to be mesmerizing. Well, most of ’em.

There are 73 species in the base game, with three extras – the Thomson’s gazelle, Komodo dragon, and (precious) pygmy hippo – limited to the Deluxe Edition of Planet Zoo. Here’s the full list of animals.

Of those species, 23 are classified under the “exhibit” moniker, which is one of the few big letdowns in this game. Unlike “habitat” species – red pandas, aardvarks, gharials, grizzlies, and the bulk of the Planet Zoo roster – exhibit species don’t run, climb, slither, swim, or do much of anything, really. You put them in a glass cube, the game auto-populates a suitable environment, and you tweak the temperature and humidity until they’re cozy. That’s it. There’s little animation, and even if they have offspring, you won’t feel an impact. Species like the Gila monster, goliath frog, and puff adder essentially live inside menus.

It’s not enough to wreck the whole game, obviously, but when so much of Planet Zoo feels intricate, believable, and immersive, any lesser element will pull you out. Some of my other qualms with the game – ornery zookeeper AI, trouble laying down paths and walkways, nonsensical zoo guests, and wonky graphical bugs – will likely be patched before long. But the exhibit stuff? I wouldn’t count on it.

Even with occasional design quirks and bugs holding it back, I adore this game as is. Similar to Planet Coaster, I think it’ll get better over time, and Frontier will surely flesh out the species list with DLC packs. But even if that doesn’t happen, I’ll be satisfied. Some of us have been waiting decades for a game like Planet Zoo to come along and scratch our Zoo Tycoon itch. Now that it’s here, I can’t get enough.