It feels like it’s been ages since Q-Games dabbled in tower defense with the original PixelJunk Monsters. The studio has taken quite a few detours since then, all of which have have been interesting in their own right, but the time has finally come for a sequel. Tikiman’s back! And he’s gone 3D!

I was surprised and delighted when I first laid eyes on PixelJunk Monsters 2. It seemed to have the same familiar components, albeit presented with a new, almost clay-like aesthetic. It’s a significant departure from the old hand-drawn art, but it feels like the next logical step after the developer’s last major release, The Tomorrow Children, which similarly used fancy real-time lighting to great effect.

Despite the eye-catching new visuals, Monsters fans are still going to feel right at home. On that note, things might actually be a tad too familiar for my tastes. 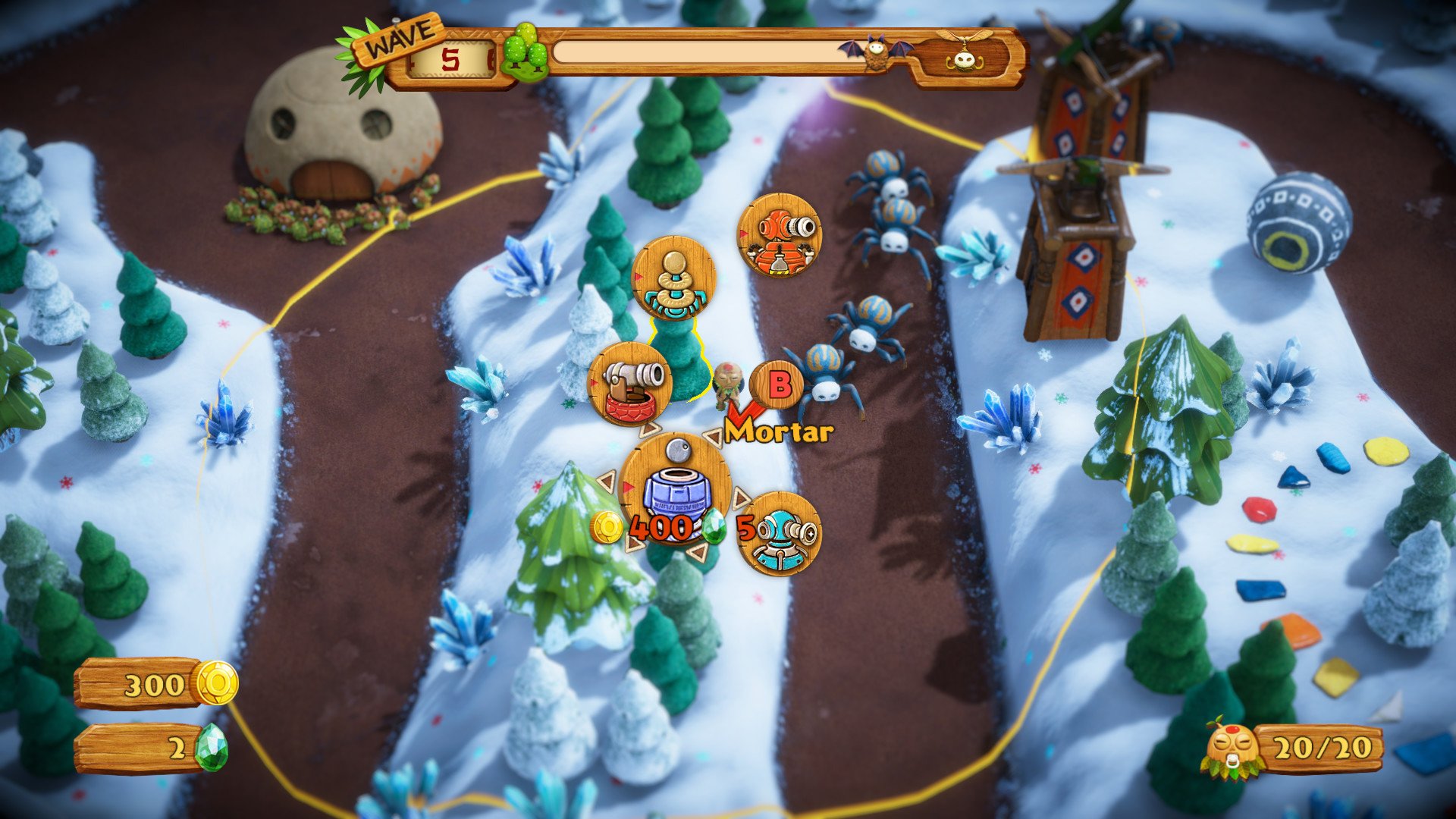 The goal of PixelJunk Monsters 2 is to protect the adorable, innocent, too-pure-for-this-world chibis at your base from spiders, golems, and other assorted critters. To keep the lil guys safe, you’ll need to think ahead and balance your time well. From the moment the first enemy wave begins advancing to the plodding ascent of the level boss, there’s always something that needs supervision.

You’ll start by placing a few structures in key locations — maybe a jack-of-all-trades arrow tower (or two!), then a cannon for much-needed splash damage, and anti-air by your base when you can spare the cash. Next, you’ll shake it. Dancing near a tower will slowly upgrade it (up to five tiers), or you can spend gems dropped by slain enemies. But gems can also go toward building more advanced structures, like a hive that fires off bees or a tower that summons a lightning storm, so dancing is vital. There are coins to manually collect, too. When most monsters die, they’ll scatter coins across the map, and that gold isn’t going to stick around forever. In PixelJunk Monsters 2, you’re constantly having to switch gears between building, upgrading, collecting, scouting, and occasionally using explosive fruit.

After you’ve tested the waters a few times in any given level, you should have a general understanding of which towers to prioritize and where to place them. You’ll figure out your bottlenecks, and hopefully remember to account for that one particular enemy in that one particular wave that always seems to squeeze through your defenses. If not, it’s back to the drawing board. There aren’t checkpoints to fall back on, and even if you know most of a level by heart, there isn’t a fast-foward button to speed through the early portions. This can be a slog for high-score chasers hoping to top the leaderboards.

PixelJunk Monsters 2 is fairly challenging on even its middle difficulty, but that’s for the best — there are only 15 levels total spread across five different biomes, with some extra paid DLC stages also on offer. You’re not meant to fly through the game, especially if you’re trying to get flawless wins in order to earn rainbow pieces (one per difficulty per level). There are also unlockable masks and shells to incentivize you to continue playing past your first successful attempt. Gotta dress to impress.

Looking at the broad strokes, the sequel hits many of the marks I’d expect it to, but the more I play, the more its small annoyances seem to creep up on me and bog down the whole experience.

When coins and gems drop, they go careening across the ground, often landing in hard if not impossible to reach spots like rivers. Unlike the prior games which gave you a full view of the action, here, only part of the map is visible, so you’ll need to pan the camera and jog around to see what’s what. Platforming and movement, in general, can feel sluggish and squirrely; it’s all too easy to hit snags. There’s so little music in the game that it ends up feeling like an afterthought. Finally, in co-op, partner players can’t move too far from the host player or they’ll be teleported to their side. With how big the maps are and how zoomed in the screen is, this limitation severely impacts your ability to divide and conquer.

On their own, these individual issues don’t break the game. Heck, even together, they don’t ruin it either. But you do come to feel their unpleasantness over time. The more pressing problem with PixelJunk Monsters 2 is that it doesn’t do anything terribly new or different or bold to help make up for these shortcomings. Switching to an up-close third-person perspective to take in the cool new visuals is novel at first, but it’s just not practical considering how much map awareness you’re giving up in the process. What we’re left with is a game that feels like more of the same, only worse. It lacks an identity.

I still think there’s fun to be had in PixelJunk Monsters 2, and I won’t be surprised if Q-Games cleans up some of the minor frustrations. But unless the studio goes out of its way to expand and experiment with new content, I don’t see this having much of a legacy. As it stands, it’s an okay-at-best tower defense title that treads familiar ground. Coming off the original, that’s a huge downgrade.