Of all the times I’ve played through Persona 3, this latest time was the fastest. Well, there was one time that had a lower total playtime, but I skipped all the dialogue. I couldn’t do that this last time as some of the dialogue had changed, as the main character was a female for the first time.

While the total playtime was about the same as my other Persona 3 play-throughs, I managed to get through the game in record time this last time. What was my trick? Having Persona 3 in my pocket. I could set the system on standby and leave it in my pocket, pulling it out whenever I had free time to get in another Tarturus floor or social link.

What I noticed is that my sessions changed to be less about getting through the game and more about exploring and enjoying the game at my own pace. Being able to play such a long game at a casual pace, and at any location, made me see one of my favorite RPGs in a while new light.

At its core, Persona 3 Portable is the same game that we gave our Editor’s Choice award to back in 2007, when it was first released for the PlayStation 2. And it borrows a bit of the gameplay improvements from the next Persona 3 release, Persona 3: FES, which we gave a perfect score to back in 2008, and even a bit from Persona 4, which we also loved.  It’s clear to see that we’ve played this game a few times, and that we really like it.

[For full background on Persona 3, we’ll point you to our two other reviews of the game, as linked above. This review will focus on the changes and additions unique to the latest version]

Cramming one of the best PS2 games onto the PSP was probably enough for series fans and PSP gamers, but Atlus added the option to play as a female character, which gives us a different perspective of the game’s world. You’re still going to school, balancing homework and extracurricular activities. You’re still spending the Dark Hour in maze-like dungeons, slowly climbing the tower named Tartarus. And yes, you’re still shooting yourself in the head. But now it’s all a bit more fresh, as everything is now seen through a female’s eyes. 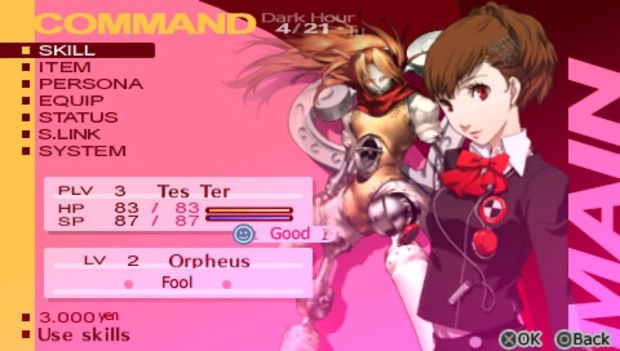 Your interactions with all the key characters of Persona 3 are totally different now. Males that were originally just friends are now potential mates. On the flip side, the girls that were originally objects of your affection are now your closest friends. If you’ve played Persona 3 as many times as I have, expect to be thrown off track for the first few hours of Persona 3 Portable. Sticking it with pays off, as you find that all new character aspects and even dialogue are revealed with your social interactions with these key characters. Beyond that, you’ll find that your other school-based social links are totally new, complete with new character art and story paths.

The battle side of the game remains unchanged as far as the challenge goes. You’re still working your way up through over one-hundred randomly generated dungeon floors with your party of three, using your demon summoning power of Persona to your advantage. What has changed is that you can now independently control each of the three characters in your party by switching off the AI. This gives you more precise control on how each of your battles go down, letting you get in more key hits on the big boss battles. Other smaller upgrades have also been borrowed from Persona 4, including the ability to guard characters in need in battle. You’ll also find that you’ll tire less easily now, giving you more time in Tartarus. Thankfully, leaving, saving and returning to your last floor is now quite a bit easier than it was in the original Persona 3, which makes for a slightly less challenging game. But, as anyone who played the first game will tell you, this change also makes it more enjoyable.

The social side of the PS2 games takes place on fully roam-able 3D areas. These have been replaced with scrolling 2D maps in the portable version, but you probably won’t miss the footwork when you see how convenient the new point-and-click navigation is. You’ll only need to point a cursor to your desired travel point or character to move or interact, and new contextual jump menus will beam you to far points you normally would have had to exit and enter to. This change makes for a faster experience, though some will find it a bit less immersive. While I’d recommend that the first-time player check out Persona 3: FES for the full-blown exploratory experience, I’m certain that those that have played P3 before won’t miss much. 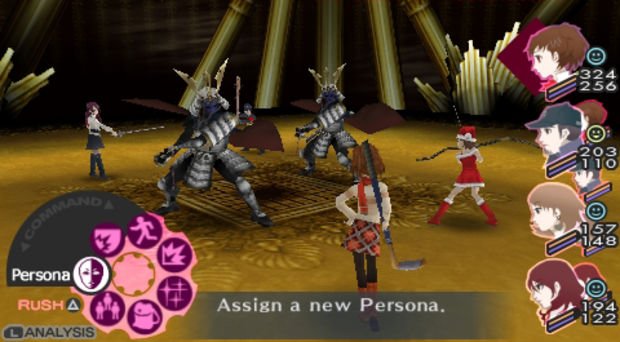 As a sort of trade-off for the loss of exploration on foot, you’ll get a lot of nice little additions. One is the new art for all the game’s locations. Very sharp, stylized 2D art is the new backdrop for your dates, restaurant visits and after-school activities. This format actually seems to work better for the PSP’s screen. Returning players will also enjoy some new character art and dialogue, both of which are uncovered as you explore new social links.

You’ll be impressed how great Persona 3 Portable looks and sounds on the PSP. Other than the point-and-click navigation, you’ll find that this portable version holds up very nicely when compared to the console version. The 3D battles look great in motion, and the 2D character art shines outside of Tartarus. P3P sports an upgraded soundtrack that keeps things fresh for returning players, though I miss the original battle song a bit. Persona 3 Portable has to be one of the best-looking role-playing games on the PSP, even beating out polished, high-budget titles like Crisis Core in my mind. 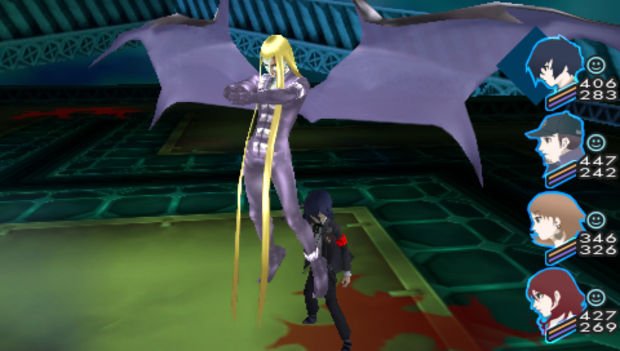 The Atlus/Shin Megami Tensei/Persona fan isn’t really looking for my recommendation for this release, so I’ll speak to two other groups that I think will benefit from this new portable version. The first is the one-time Persona 3 player that would like to give it another go, but also remembers sitting in front of the television for weeks. Get this version, and you’ll blow through it so much faster and likely enjoy it a bit more on-the-go. Another is the poor sap that couldn’t find time to finish this 70+ RPG in the first place. Yes, it’s every bit as good as you’ve heard, and this PSP version will make it really easy for you to experience and actually finish some time this summer.

We loved it before and we still love it. This title would have sit very high on our recommendation list just as a straight PS2-to-PSP port, but the new additions make it appealing to both the new gamer and the seasoned Persona fan. Looking over our PSP game coverage since its release, Persona 3 Portable is near the top of the heap among all the offerings for the system, and definitely at the very top for role-playing games.