Bjorn, what have they done to you

My criteria for enjoying a game with microtransactions is simple — am I having fun, and can I consistently have fun without feeling like I need to pay out? Unlike some people who hate microtransactions on sheer principle, if I can play through an entire game without having to indulge or otherwise pay attention to them for one moment, they naturally don’t detract from my enjoyment of said game.

If a game entices me to want to pay, I’m generally okay with it, as long as I can play the core game unfettered. See Path of Exile for this model. It works.

Peggle Blast on the other hand is a travesty that attempts to subvert fun at every turn. Shame on you, EA. 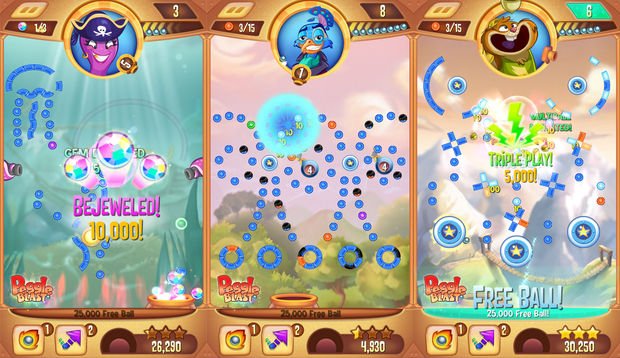 As expected, this is Peggle in mobile form. Swipe to aim and tap to shoot. It’s all very accurate and intuitive. Just like the past games in the series it’s a modified version of Pachinko, guiding balls to clear out orange pegs and gaining tons of points in the process. Bank shots, combo shots, and precision aiming are still key mechanics, and I still haven’t gotten bored of the formula nearly eight years after the launch of the first title. It’s fun at first in the tutorial zone, where the game tricks you into thinking it’s fair.

Then the bullshit starts to come into play. For starters, the developers have added “fire” to the mix. If a ball hits fire in select levels, it is lost. Of course, balls are limited just like the other games, but now you’ll have to pay if you lose them all and want to keep playing. Yep, strike one is an energy mechanic. This is not only sleazy due to the erratic and unpredictable nature of Peggle, where a ball could fly into any corner at any given time no matter how good the player’s aim is, but it also defeats the feel-good, positive nature of the series.

When a ball fell into a pit after hitting no pegs in the past, it felt like the player’s fault, and with the “free ball” bucket mechanic, there was always hope that a bad shot would become a good play. With balls just fizzling up in flames before they can hit the bucket, that’s all gone — better have that wallet ready. Lives take half an hour to regenerate, or of course, cold hard cash will do the trick. Lots of other things can take away lives too, like “phoenix eggs,” which need to be hit multiple times to hatch, lest they randomly fall and cost a precious life. Why do these mechanics even exist?

You better still have that wallet out when you access a new set of levels, because you need to wait six hours before playing them, unless you recruit sleaze your Facebook friends for instant access. Oh, and did I mention the power-ups, which are constantly thrown at you and are custom-tailored to certain difficult levels? Or the fact that the game attempts to sell them to you when you’re about to lose? It’s a shame, because I really want to move on and see some of those new adorable Peggle Masters that were added, but this is too much to handle. Just look at the potential in-app purchase list on this iTunes page.

EA literally has Peggle on mobile devices right now with a model where you purchase the entire game. Why in the five hells of Cthulhu are they monetizing a franchise that has already seen a massive amount of success on the platform? Look EA, if you want to make the next Candy Crush, I get it, but don’t use the Peggle franchise to chase that dragon. 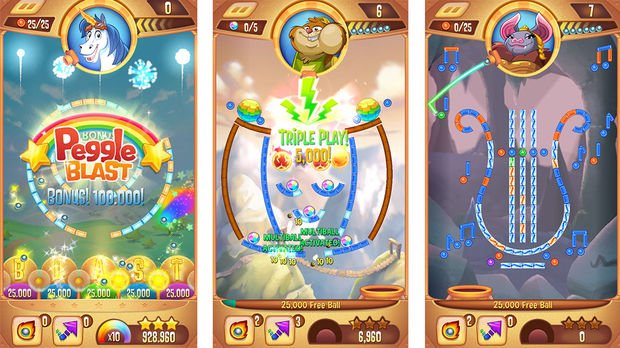 I’ve reviewed over a hundred mobile games since the iOS market caught on, and I’ve seen it all. I’ve seen games with microtransactions, energy systems and more, and a lot of those titles were actually pretty reasonable and fun to play in spurts. Peggle Blast however is a complete 180 from what the franchise once was, and the entire philosophy that PopCap created does not fit this model in any way, shape, or form. It would be a lot easier to swallow if there was what I call a “buy-out” option, which lets you essentially purchase the entire game for a fee, eliminating all of this nonsense. But you cant, because the experience is custom-tailored around the worst kind of microtransactions. I don’t think this can be saved.

EA needs to stop this bullshit with their mobile line, because they’ve had a pretty decent thing going on recently with games like Dragon Age: Inquisition and Plants vs. Zombies: Garden Warfare. Ruining all of the goodwill that Popcap has built up over the years is a damn shame. EA is doing some things right in the current climate, but the publisher has consistently shown us that it cannot move forward without taking multiple steps back.