You can leave your hat on

I’m actually quite surprised it’s taken this long for a video game to hit the market. Given that Steven Knight’s smash hit period drama hit the BBC way back in 2013, and is already five seasons and 30 episodes deep, it would seem that the violent and conniving shenanigans of The Shelby Family would have made their digital transition long before now.

Perhaps the problem was a lack of ideas. How do you convert a talky period drama into a deeply interactive format while still keeping the overall atmosphere and style aesthetic of the show? Developer FuturLab has taken a stab (no pun intended) at this difficult task with Peaky Blinders: Mastermind, a strategy/puzzle title that attempts to capture the razor-sharp wit and instinct of the charismatic-yet-dangerous Tommy Shelby and convert that to a playable gaming experience.

It seems, however, that some brands will always struggle with the leap into the realm of video games, and while Peaky Blinders: Mastermind is certainly inventive, even somewhat stylish, it ironically fast loses connection with both its excellent source material and the player because of its very efforts to become… well… a video game. 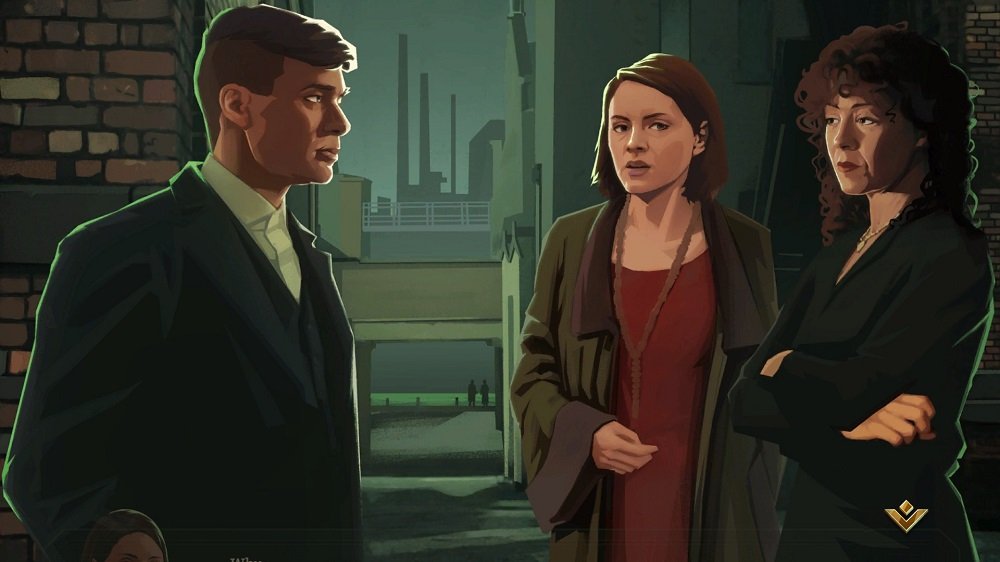 Set before the events of the TV series, Peaky Blinders: Mastermind sees the men of the Shelby family return home from the horrors of the First World War. Settling back into the back-town slum of Birmingham’s Small Heath, Tommy Shelby immediately sets about making his family name a feared force to be reckoned with. Causing trouble within hours of setting foot back in Blighty, Tommy – along with brothers Arthur Jr. and John, sister Ada, and aunt Polly – find themselves falling in with bad deals from rival gang The Gilroys, the local Chinese mob and, of course, Her Majesty’s shifty constabulary.

In Peaky Blinders: Mastermind, players guide the Shelbys through 10 missions, laying out a very thin narrative of brotherhood and murder in Birmingham’s criminal underworld. The missions are intercut with stylish artwork, which gives the narrative some class, but with a lack of voicework from the cast, and the heady heights of a fantastic TV show to live up to, the Mastermind storyline isn’t particularly engaging, and more of a simple chain of events to force our guys and gals out of the house and onto the mean streets of Small Heath.

Peaky Blinders: Mastermind has a brilliant and inventive gameplay system. At first glance, Mastermind is similar to titles such as Commandos and Desperados, as players guide the Shelbys through each mission, utilising their unique skills in order to steal items, gather info, perform acts of sabotage, or whatever MacGuffin has been called up for the given quest. Where Mastermind differs from those titles, however, is that all of the characters’ actions are planned and executed by the player “simultaneously” on a singular time. It’s a tough explain, so hold on to your razor-lined hat…

Players control each character one-by-one, which locks in each specific character’s path of action, but the player can then, at will, rewind the timeline and take control of other characters, controlling them in tandem with the “ghosts” of the previous character’s actions. To put it another way, the player lays out each of the characters’ routes, decisions, and choices, so that all of the cast’s movements and actions, once activated in real time, will work in perfect synchronicity with each other. This system represents the “Soldier’s Minute,” a reflection of Tommy’s astute ability to formulate sharp schemes in his head.

There’s no denying that this is a smart approach to the strategy of Mastermind, and there’s a genuine satisfaction in watching one character perform their own part of your plan, while watching the movements you had previously given another character play out. It’s an interesting way to execute a team-based strategy title, and I’m frankly surprised none of the Commandos/Desperados titles have adopted it themselves. 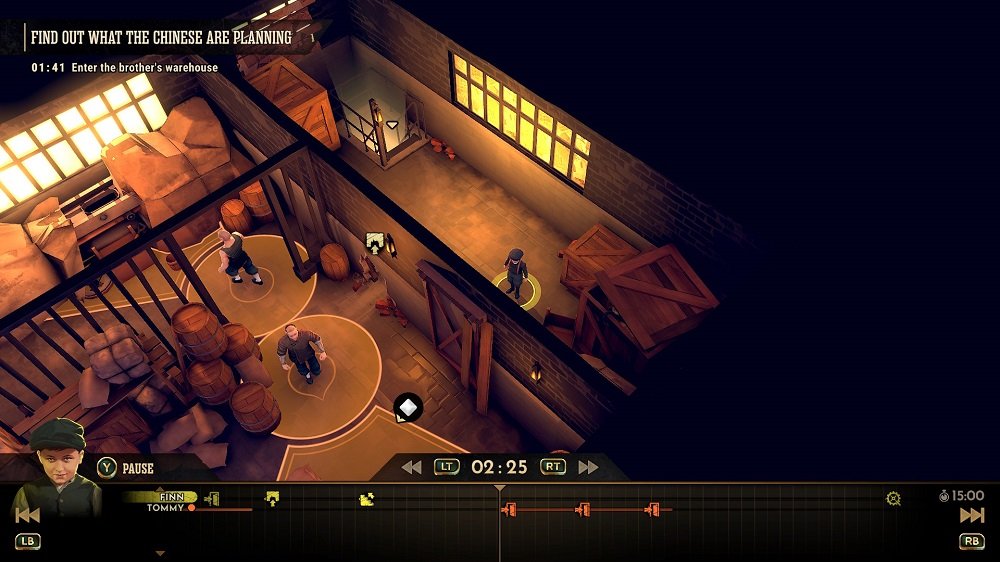 Unfortunately, while the system itself is inventive, the actions the player performs throughout the game are such bog-standard “adventure game” fare, that the whole concept doesn’t even come close to reaching its potential. Ultimately, Peaky Blinders: Mastermind is 10 short missions of holding open doors, finding keys, pushing crates, pulling levers, holding open more doors, pulling more levers, and pulling more levers (with the occasional bout of fisticuffs). In one particular room, you find a key to open a door to find a key. So completely repetitive and robotic are these missions, that the spirit of the show and the uniqueness of the “Soldier’s Minute” system becomes lost.

Not helping is the comical nature of the level design, such as a two-story home where every door is a steel one-way system and every wall has a gaping hole for young Finn Shelby to crawl through. Characters will break into buildings to find occupants who have no concern about them intruding. You can block a policeman’s view by pushing a crate directly up to his face. The actions asked of the player – and the odd layout of the maps – deprive Peaky Blinders: Mastermind of its identity, cutting the legs off of the gritty realism of its source material.

Helping to restore this lost identity is the title’s impressive audio/visual aesthetic. The aforementioned cutscenes are nicely stylised and Mastermind has an excellent score, very reflective of the dark, grungy nature of the original series. The show’s Small Heath is well-recreated from a visual standpoint, with a lot of attention to detail in regards to its grimy alleyways, sad marketplaces, and ramshackle homes and warehouses. Mastermind feels claustrophobic and threatening, as it should. 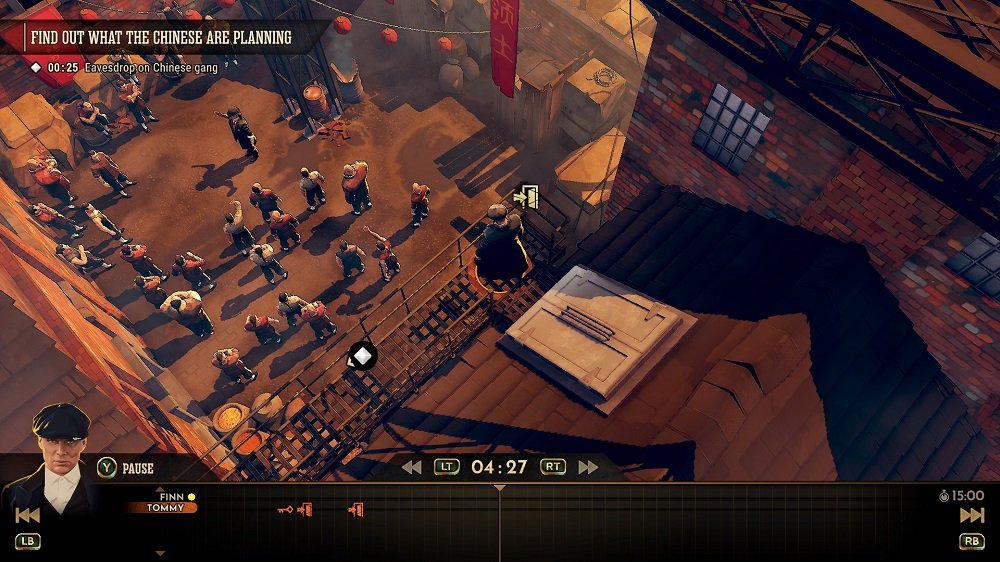 A short ride, Peaky Blinders: Mastermind can be completed in around five hours. Replayability is offered through time-attack – challenging players to hit Gold, Silver, and Bronze targets by moving the cast through each mission with expert efficiency. There are collectible pocket watches to be found on each stage but, oddly, not only are they incredibly easy to come across, they also seemingly don’t actually unlock any reward. The overall package is lean, with a presentation style akin to a mobile title and no extra modes, or even a gallery.

Peaky Blinders: Mastermind is built on a inventive central concept and is smartly dressed in an authentic audio/visual package, capturing the dangerous world of The Shelby Family. The inventiveness of this core element is not captilised upon, however, resulting in uninspired action and repetitive gameplay. Peaky Blinders fans might find a few hours of entertainment but, overall, Mastermind is a missed opportunity.