The roller coaster sim you’ve been waiting for

Back when I reviewed Planet Coaster, I brought up that Parkitect was just starting to take shape. Well, about two years later, that shape is solidified and the game has left Early Access. I’ve been following the game pretty closely, reading the updates on Steam and eagerly anticipating this day. I held off on Early Access because I didn’t want my first impressions to be potentially soured.

Now that the wait is over, it’s time to dive in and charge to use the bathroom! 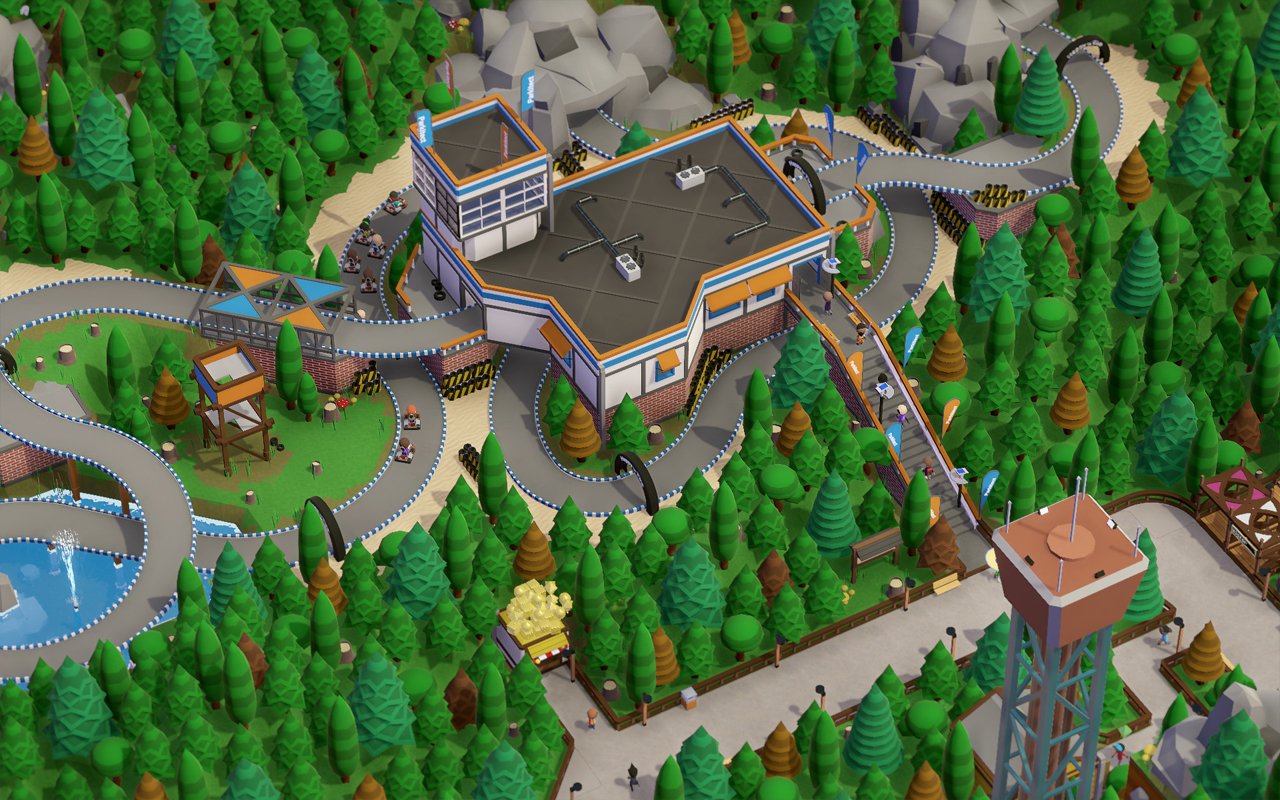 Parkitect does a great job of delivering where Planet Coaster did not. The former is more oriented towards the management side of theme park design, while the latter was a creative playground that was light on everything else. Both are fine games in their own right, but I think most people, myself included, have fond memories of playing around with the minutia of managing parks back in the RollerCoaster Tycoon days of old.

So naturally, the first thing I did was try and take a park-goer and throw them in a pit way off the beaten path. It worked! 10/10.

On a more serious note, Parkitect has some serious nostalgia vibes, but it absolutely stands on its own as a major player in the genre. It has absolutely devoured my time without me even realizing it. It’s the type of game that naturally leads the player to set smaller, incremental goals for themselves and always have something to look forward to. It could be attracting the next batch of park-goers, or saving up enough money to build the next big coaster — either way, something good is hopefully on the horizon.

There are plenty of rides – both roller coasters and non-coaster attractions – to choose from. In terms of coasters, there are also plenty more available on the Steam Workshop, made by community members. The best part is, it’s possible to browse the Workshop while in-game, add something, and then use it almost instantly. I was completely prepared to save, reboot the game, and then place down the new coaster. Nope! A small pop-up let me know that the new blueprint was ready to use shortly after I had “subscribed” to it on the Workshop.

Designing a coaster from scratch can be a blast, but has one major setback: the lack of an auto-complete button. Coasters are split into different types like wooden, steel, stand up, wild mouse, and even bobsled, most with their own unique quirks. When creating a bobsled coaster, for example, it’s important to manage the speed on the curves so that the poor riders don’t zoom out to their death. But, if you want to recreate the bobsled track from Cool Runnings, you can do just that. In fact, I did just that and you can download and use it here. You’re welcome.

Anyway, chances are you’ll have a ball creating your own zips and zooms on a coaster, only to realize the ending track won’t connect to the station. Naturally, they need to be at the same exact height. Alright, no big deal, just go back and adjust it slightly. Well, that’s easier said than done. Height markers are placed at various spots of the ride to keep track and they’re done in fractions, everyone’s favorite F-word. I can’t tell you how many times my ride was at 2 7/8 height units when it needed to be at 3, which required about 25 minutes of frustrating adjustments to fix. It’s not intuitive or remotely entertaining to make these adjustments, and it just gets in the way of what should be the “cherry on top” when designing a ride. I had no satisfaction of fixing this problem, just frustration. Give me a button to do it automatically and let me get back to what I enjoy about Parkitect.

I also wish you could “ride” the rides like in the later Tycoon games, but the beauty of Parkitect is that some modder has already taken it upon them to attempt to add such a  feature to the game!

That aside, there is so much to love here. Parkitect feels like a natural evolution of the roller coaster sims of old. It adds an extra layer of management in dealing more in-depth with staff members and the “behind the scenes” elements of running a park. None of this makes management feel like a burden, quite the opposite in fact: it feels right at home. Park-goers won’t be happy to see staff members moving inventory to shops out in the open, so players can add staff-only walkways that are out of the way to appease them. Staff members will also get too tired to work, so it’s a good idea to build a staff room for them. Oh! And they can also be trained to do their job better, so building a training center is a good idea (though they will get better at their job over time). There is a lot to consider, but again, it never feels overwhelming. 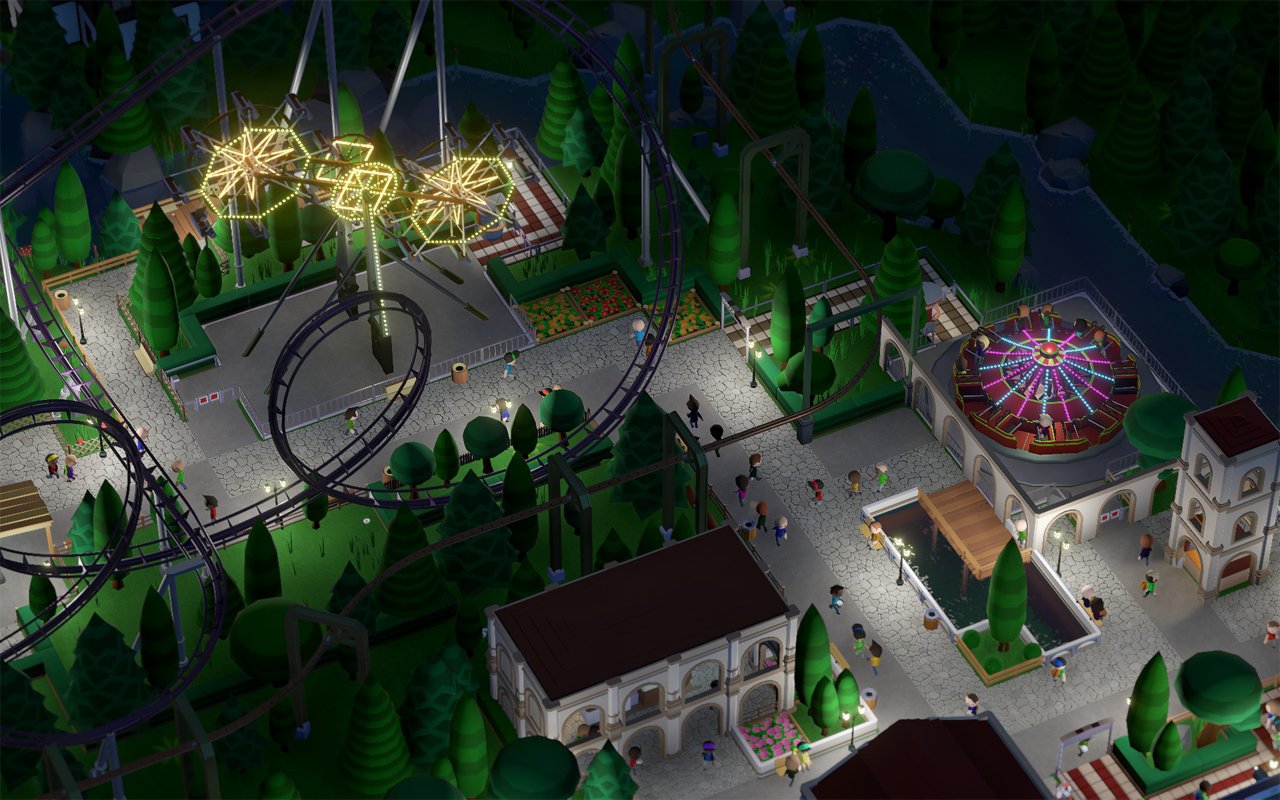 Taking care of what people say is actually a large part of Parkitect. There are many visualizations to toggle on/off, one of which shows just how ugly the park really is. People don’t like to see things like trash, toilets, or any of the staff buildings. Placing trees or something else to obstruct that view placates the park-goers, bless their simple minds. Again, this adds another layer for the player to keep track of while still keeping things interesting. Finding inventive ways to obfuscate peoples’ view allows players to get rather creative. Or, you know, you can just plop down some trees.

Guests will also benefit from being able to actually see other parts of the park. If a rider goes on top of the Ferris Wheel, which allows them to see a ride that would otherwise be hard to see, they may think “I want to go on that ride over there!” and then go there. This has always been something I considered when constructing parks in the genre, but Parkitect actually uses this idea to its benefit. Add it to the list of smart design decisions that add to the overall experience.

Of course, players are able to start up a brand new, completely customizable plot of land and go nuts, even disabling things like money and research to create a true sandbox mode. However, the campaign is the big draw here. Effectively a series of challenges or scenarios, players will systematically make their way through 26 levels, each with their own environment and set of tasks. These do a great job of easing the player into the mechanics (there is a tutorial, but it barely covers the basics) and becomes varied enough to continue to entice players onward. Plus, completing a level unlocks it in free play for those who enjoy the environment itself. 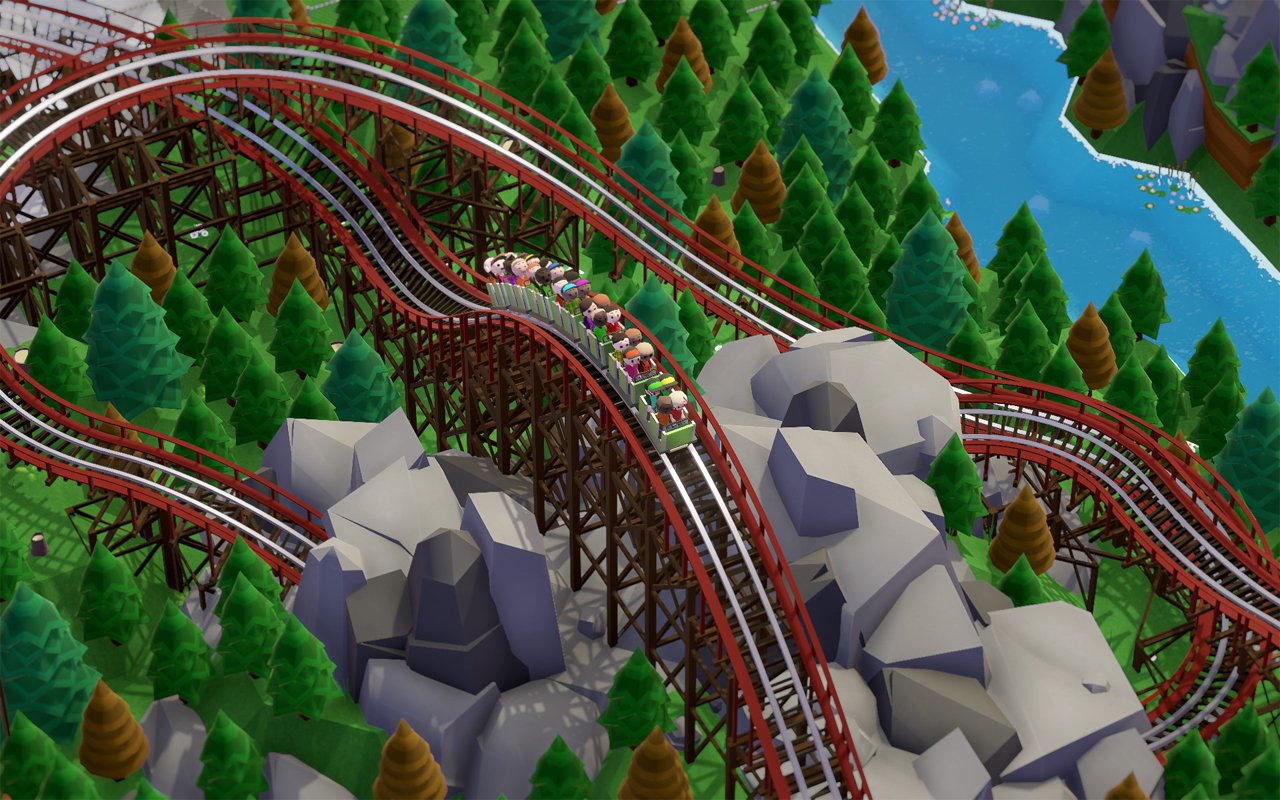 The visuals are sharp and colorful while the models themselves are kept simple. The result is an awesome blend of simplicity and style that harken back to the game’s roots while still feeling unique. There are no readability issues with any important information, and everything can be ascertained with a quick glance, once you know where to look. The music is likewise bubbly and upbeat, kicking in at just the right times to bring a smile to your face.

If you came into this review with the simple question of “is this game a modern-day RollerCoaster Tycoon?” the answer is an absolute yes. I spent most of my time in Parkitect analyzing revenue graphs and tinkering with prices to try and nickel-and-dime each guest out of their hard-earned cash. While I wish the ride creation was much friendlier, managing staff, guests, and park design has never felt better or more complete.