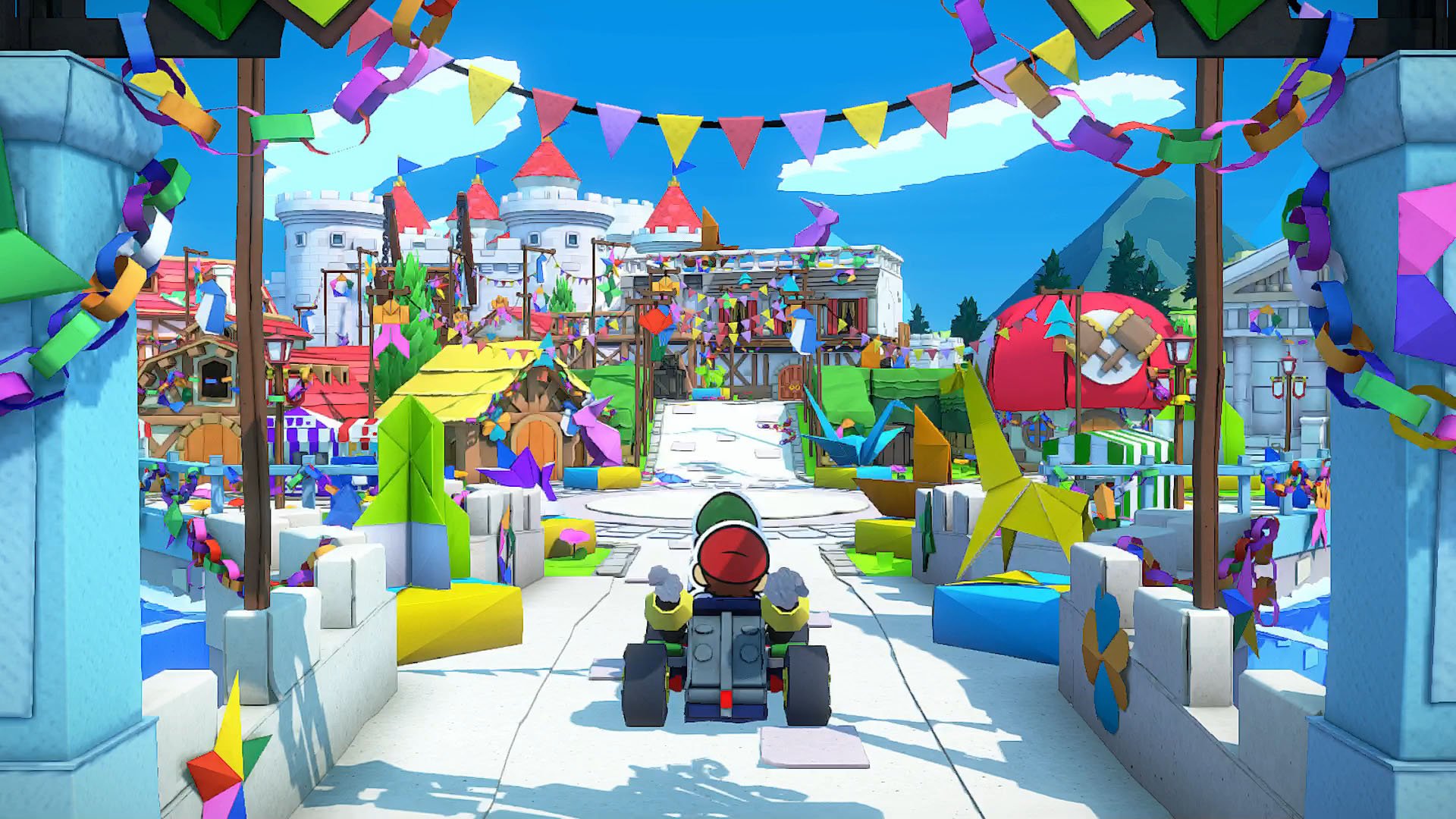 Midway in the series’ life cycle, something about Paper Mario just…changed. Most of the RPG pretenses were dropped, morphing the series into a more action-adventure package. People were pissed, but the world kept turning.

No, Nintendo didn’t magically change its mind with The Origami King and bring the original formula back — but like Color Splash, it’s still a fun romp in its own right.

Look, I loved Super Mario RPG as much as the next ’80s/’90s kid and would enjoy witnessing its legacy carried on into oblivion. But following in the footsteps of the reality of the genre-shift with Sticker Star, Color Splash was a fun little action-adventure that made me smile more than most of the games released in 2016 — and Origami King has a very similar vibe to it.

It might have a lot of the series’ long-gone RPG elements stripped out, but it has plenty of personality. As expected, the wonderfully art of origami is front and center here. The Mushroom Kingdom (and the outskirts) are taken over by King Olly: a mysterious and powerful new entity that wants to fold everything in his image. Bowser is pissed he isn’t the top dog, too; it’s a very similar vibe to past RPG Mario games.

Pitting the more fully-formed origami aesthetic against the paper aesthetic is genius, and really helps make Origami King work. Origami as an art form has always fascinated me, as does the zen-like experience of watching someone who is really into it slowly make something out of nothing. So having a crude paper version of Mario smashing things up in juxtaposition is pretty great.

In Mario’s quest to rid the kingdom of the tyrannical Olly, you’ll explore a fully open world (no “stage select!”) in a very Zelda-like fashion (with shrine and dungeon stand-ins). A lot of the loop is Zelda-like, actually. You won’t “level up” traditionally, but you’ll earn money from fights, which you can use to unlock stat-boosting equipment. You’ll also come across life-increasing heart upgrades in the wild, or you might have a quick encounter with an NPC that ends up becoming a shopkeeper.

Keep in mind, though, Origami King takes a more relaxed approach to everything. Although a scant few interpersonal relationships are at the forefront, the narrative takes a big backseat to silly antics and comedic dialogue. As you roam across this chill world-in-peril you’ll patch up its holes with confetti, solve puzzles, and engage in some very light platforming. Even the combat system is reserved.

This time around battles take place in a ringed arena, with enemies scattered about. Your job is to use a circular or line selection tool to “line up” enemies in either a 2×2 grid or a straight line so you can smash them with your hammer or jump on their heads, respectively. Different enemy types are weaker to specific variations of those two weapons (steel boots will stomp foes with spikes, and so on), which have durability meters and can break. There’s also sparing instances of direct combat out in the field with your hammer, and you can give your attacks or defenses an “oomph” to them by pressing a button at the right time: just like Super Mario RPG and its successors.

Throughout my time with Origami King I was back and forth on whether or not I dug the ring system. Sometimes it can feel relaxing and fun, especially when you enter a new area and are asked to “solve” an enemy type. It all funnels into the central puzzle archetype of the game. But in areas rife with enemy minions it can feel tiring, especially since you don’t get major rewards for your troubles beyond extra gold (which you’ll sometimes spend to boost yourself in the middle of a fight).

Bosses are similarly hit and miss. A few (like the one in the Treehouse video recently) are very basic in nature and take little time to solve. Others are more intricate puzzles, with hazards that blow tiles off of the board or create less predictable outcomes with multiple phases. It’s par for the course for the uneven combat system, but there were very few times where I was either rolling my eyes or huffing for it to be over. At worst, it can be a minor inconvenience when an encounter doesn’t click.

Those moments can also spill over into the core of the game’s exploration route. There were times where characters were interacting in such a basic, tutorialized way that I was audibly saying “get on with it!” as I witnessed very slow-moving moments that are in way too many first-party Mario games. But then a character will say a riotously funny bit of dialogue, something interesting will happen, and we’ll be on our way.

The creepy and cult-like style of the enemy faction assists with creating an air of intrigue. Olly can be uncharacteristically cruel for a Mario character, and some cast members are not afraid to get weird. While some of the aforementioned faults would sink a lesser team, Intelligent Systems and the writing squad have done a great job of keeping Paper Mario funny and fun to play. This is a world worth experiencing.

There’s room in my heart for both styles of Paper Mario. The old games still exist and this newer, sometimes thinner formula is fine too. That said, it’s possible Nintendo and Intelligent Systems have folded this subseries every which way they can at this point. I hope the next one is a little more fresh.