Tribute Games lives up its name

I feel like I can always count on Tribute Games to tap into retro gaming in a novel way. The team’s latest, Panzer Paladin – a level-based action-platformer with shades of Castlevania, Mega Man, Blaster Master, and even Zelda II – has the right stuff. It’s a sword-swinging mech adventure around the globe.

As an ace power-armor pilot, you’ll jet off to around a dozen countries to drive back demonic space invaders inspired by real-world mythology. Medusa, Baba Yaga, Popobawa – the gang’s all here.

In the mech, you can wield powerful (and super short-lived) melee weapons that slice through creeps and conjure spells. Outside the suit, you’ll slip through tight passages as a tiny whip-cracking android. 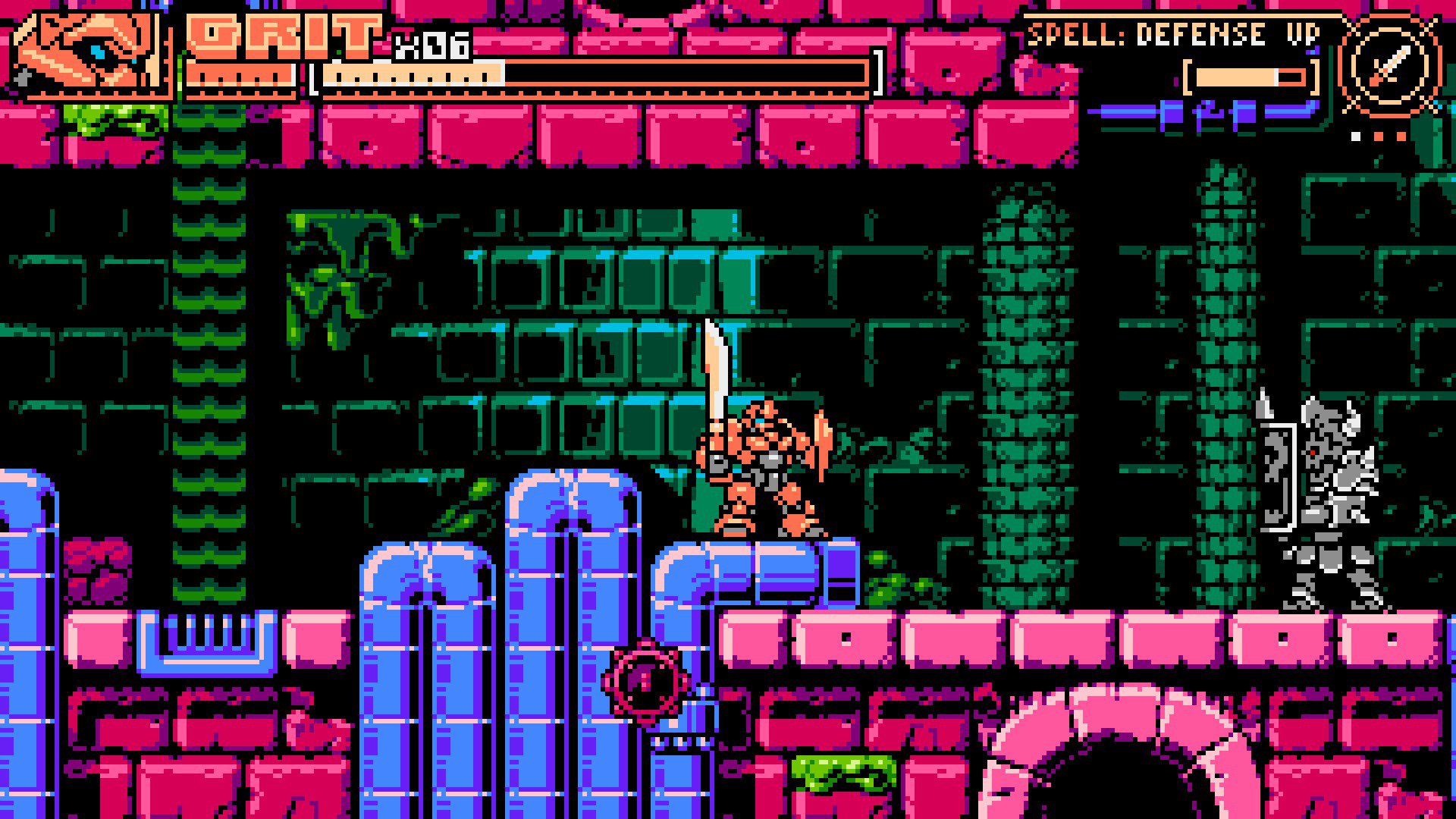 I can’t say enough good things about that “world tour” format. Panzer Paladin uses it to great effect to give every main level a unique identity – not just with cool bosses and vibrant color palettes that fit each particular region, but also memorable tracks to get you in the mech-stomping mood. And if you happen to get stuck – well, more like when you hit a brick wall – you can bounce to a different area.

Panzer Paladin is tough. If you don’t stick to an old-school methodical approach, you’re going to take a lot of chip damage, and while there are occasional HP-refill stations, checkpoints are sparse. One bad jump can send you back. The game is also surprisingly beefy. Apart from 11 main choose-your-ideal-order stages, there’s an endgame gauntlet with six more levels leading up to the final boss battle.

My first time through took me four hours or so. Since then, I’ve messed around with a Speedrun mode with ghost data for individual levels, a boss-rush Tournament mode with a points-based retry system, a Blacksmith tool for forging custom pixel-art weapons, and the Remixed Story, which is essentially a more challenging New Game+ mode with minor stage tweaks and enemy-placement alterations.

It’s a generous game. My playtime is pushing eight hours, and I feel like there’s still much to learn. 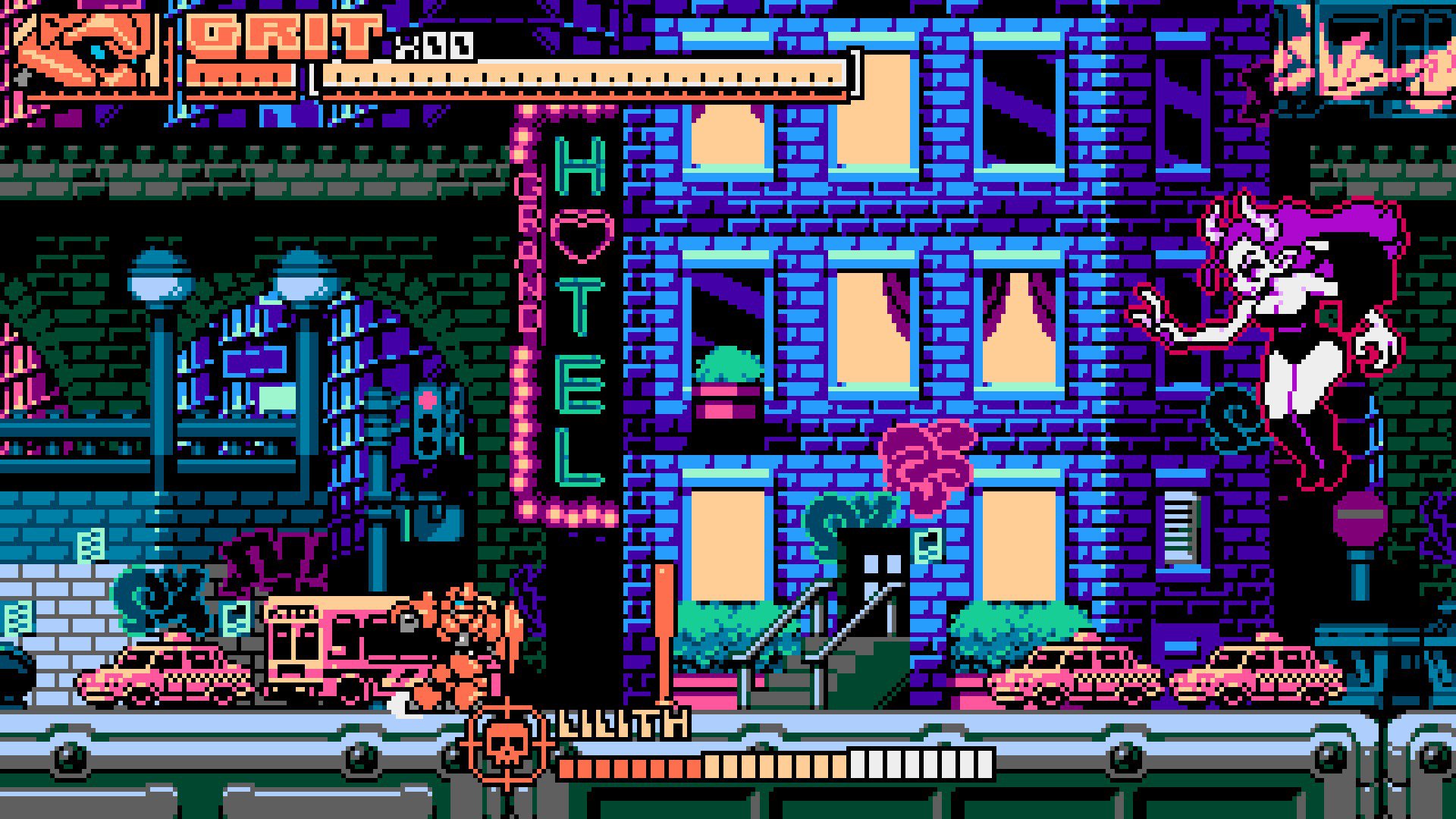 Panzer Paladin‘s combat system won’t be to everyone’s tastes, but it gives the game an interesting texture. In short, you’ll constantly pick up “spirit weapons” – swords, spears, hammers, and all manner of melee weaponry – by tearing down demons or busting open hidden walls, Castlevania-style.

They’re disposable, as in, they all have a durability meter in your HUD. Weapons come with varied damage stats and spell capabilities, and you can carry them between levels. You can also equip and unequip them at will – in the latter case, the mech will default to a much-weaker punch attack.

At any point – but preferably right before a weapon is about to break – you can toss it at an enemy. If it collides correctly, it’ll do significant damage. If it misses your target, you can pick it back up again. Or – big or – you can shatter a weapon to unleash its spell. I’m talking healing, lightning, projectile deflection, attack/defense buffs, that sorta thing. You also have a shield, a double-jump-style upward thrust, a bouncing downward thrust, a back-dash, and the ability to duck to strike low in duels. Still with me?

That might sound like a lot to manage, especially at first, but it’ll click. The duels against shield-bearing foes, in particular, are very rewarding. There’s this great back-and-forth as you clash against each other.

I settled into a routine where I’d try to horde my best gear for boss encounters – every time I came in empty-handed, I had a rough time trimming their life bars – and I just always expected to have to face the recurring mid-level Horseman boss. Without getting into the story or lore too much (there are cutscenes), he shows up if your spirit weapon “burden” is too high. You can check your status from the pause menu. I’ll say this much: the Horseman is a pushover, and since you can sacrifice weapons on the world map to permanently boost your mech’s HP, there’s no real reason not to stockpile everything.

In the event that you run out, you can replay a level to replenish your stock. I only did this a few times. 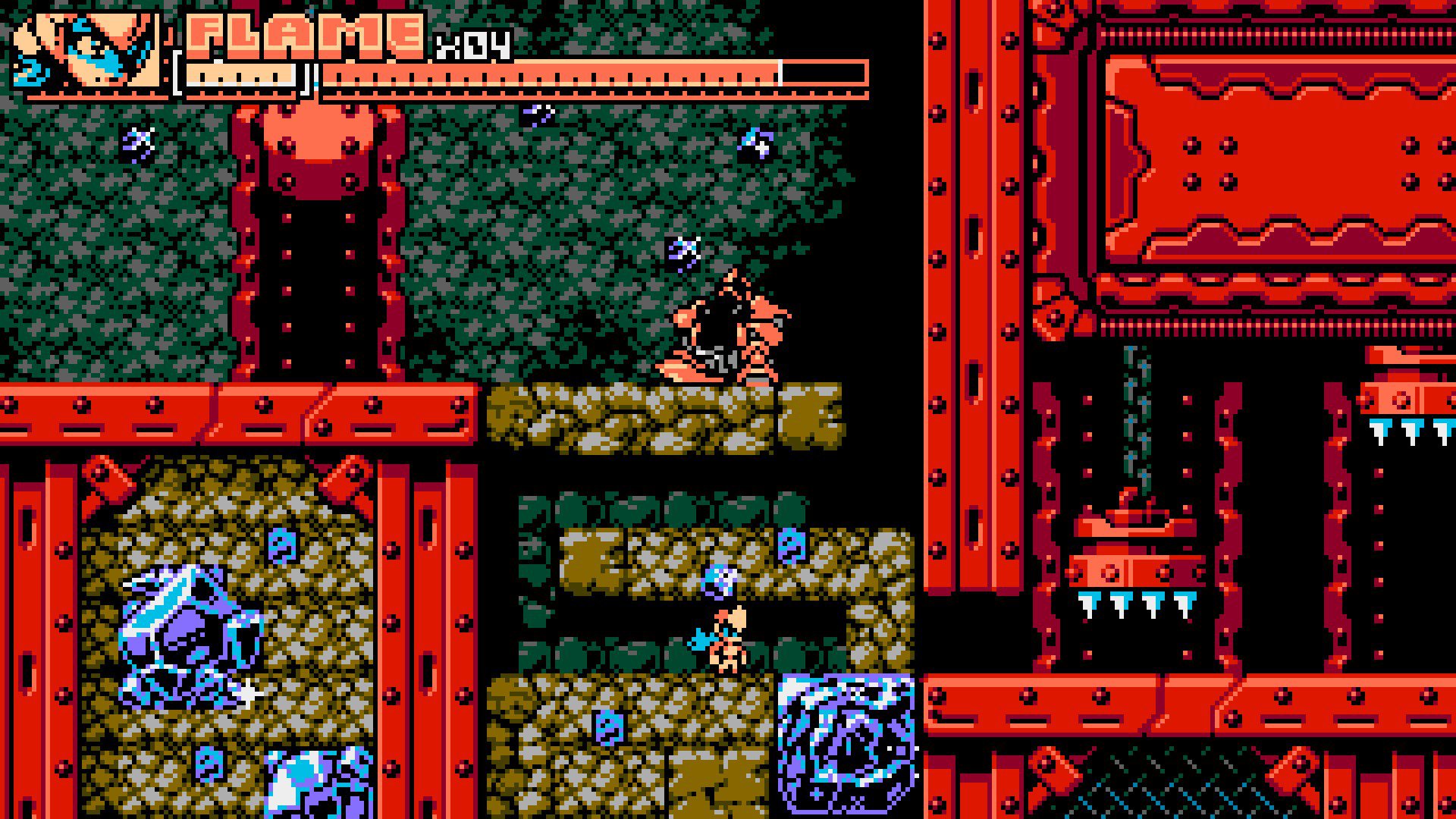 Apart from the whole mech-with-a-sword conceit, the other draw for me was the ability to pop out of the armor at any time and grapple-swing as the miniature pilot. In practice, I was a little let down. This mechanic is fun enough, but it’s predictable. The mandatory out-of-the-mech segments tend to blur together since these platforming routes feel so similar and linear. On the flip side, if you take too much damage and are forced out of the mech (either mid-level or during a boss fight), the tension skyrockets.

A few attack patterns feel under-tuned when it comes to providing a fair challenge for the mech and the fragile pilot, and I would’ve preferred a consolidated endgame gauntlet. The final six areas are a satisfying test to clear – I’ll never turn down the chance to fight more bosses – but they dragged on.

Did I ever have a stern conversation with my monitor? Yeah. Of course. There are some real cheap shots. Panzer Paladin isn’t afraid to put you in frustrating situations that require patient timing, agile reflexes, and occasional foresight. It also asks you to consider every ability at your disposal, a lesson that took me way too long to get down. (A word of advice: don’t forget about your backward dash.)

Tribute Games tapped into a treasure trove of classic games, and that adoration shines bright in Panzer Paladin. In a year already full of great action-platformers, this one shouldn’t be skipped.