Overcooked: All You Can Eat probably won’t be anyone’s first, second, third, or even fourth pick-up on PlayStation 5 or Xbox Series X/S, but if you get around to it – when you have enough controllers on-hand – you’re in for a fun, funny, maddening time. This is the best-feeling and most convenient way to play Overcooked 1 and Overcooked 2 along with their respective DLC packs and free level updates.

All told, there’s a couple hundred levels to tackle, seven of which are new to Overcooked: All You Can Eat. They’re a welcome challenge even for experienced players, but they won’t last too long.

It’s worth stressing that upfront. Games aren’t getting any cheaper this gen, and even though I adore Overcooked – it’s possibly my favorite co-op series… ever – All You Can Eat won’t speak to everyone. 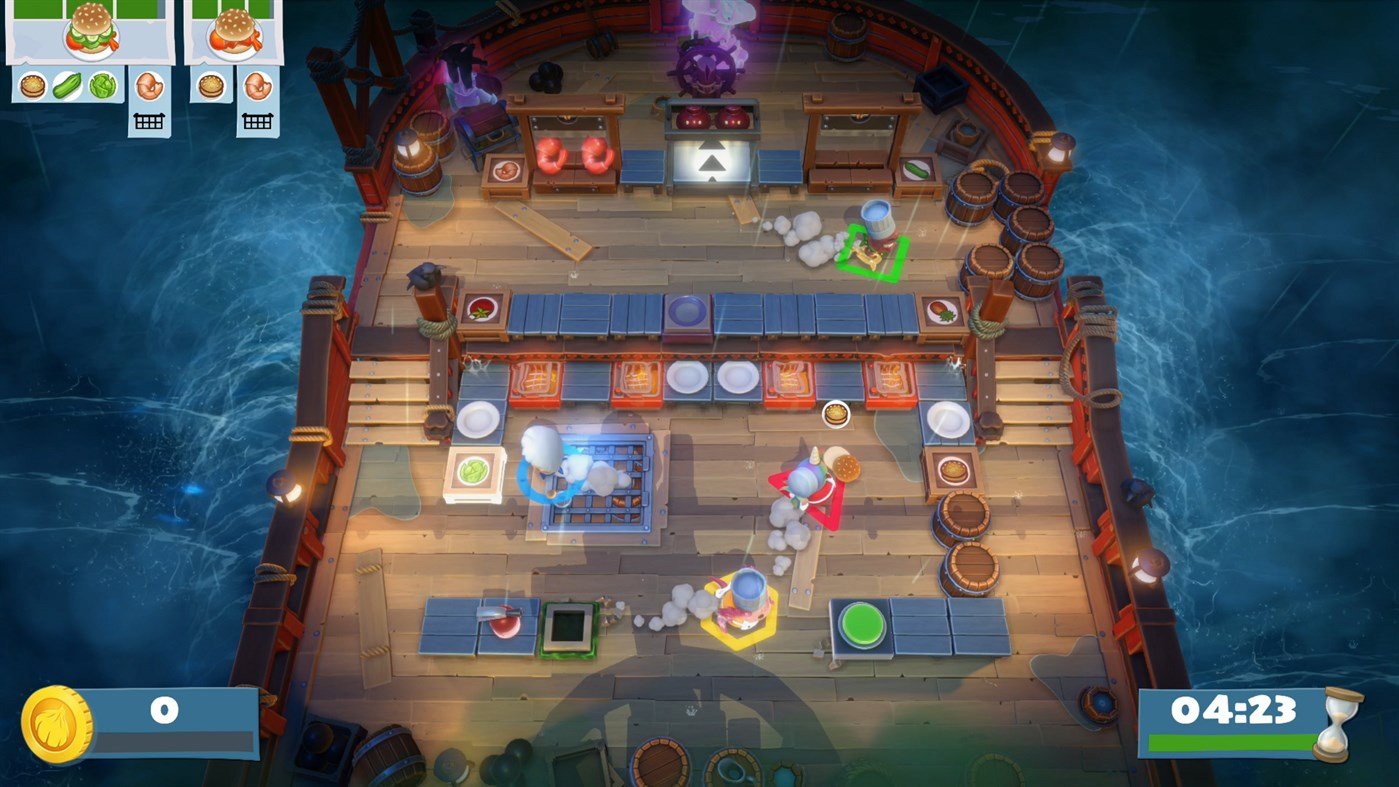 To be clear, this remaster overhauls the original Overcooked to look and feel more like Overcooked 2 (minus the ability to throw food), it loads levels in a matter of seconds (a huge improvement compared to older consoles), it looks sharp (with 4K/60FPS gameplay), and everything’s bundled together with a quick, no-fuss menu. You won’t have to chase down buried listings to access the formerly DLC stages.

That might not sound like enough to double-dip with a remaster – and accessibility options, like the ability to prevent meal orders from expiring, may or may not apply to you – but it all feels fantastic. Everything is responsive. My only nitpick: several levels go overboard with a camera sway effect.

The actual level layouts are the same, but overall, the difficulty curve seems more natural. The score thresholds have been tweaked for the better. My co-op partner and I had a smoother time earning three stars in certain stages that used to always give us trouble (in some cases as recently as a month ago; we’re constantly revisiting Overcooked). On the other hand, four-star ranks are as tricky as ever. It’s a welcome change, one that makes these games – and especially their finales – feel more consistent.

The other big feature in this refresh is online multiplayer for Overcooked 1. (The original version was local-only.) An update for cross-platform multiplayer is also coming in “early 2021.” That’ll be useful if, say, you only have one DualSense controller. Speaking of: the DualSense integration is fine, but nothing too special. It’s far more subtle than, say, Astro’s Playroom. It works fine. You’ll want to turn the gamepad volume down, though – your controller will belt out the end-of-level countdowns by default. 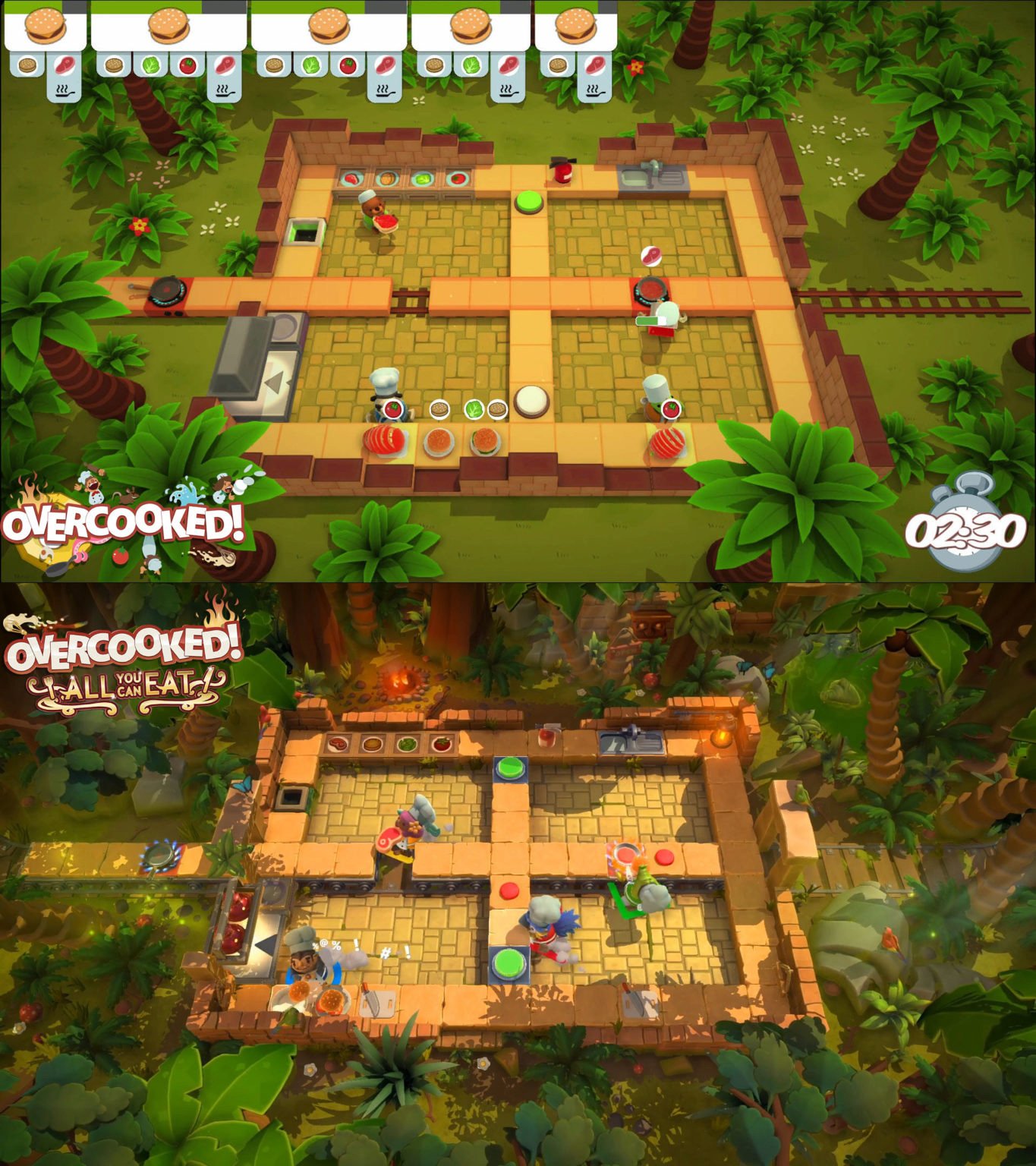 For All You Can Eat, Overcooked 1 was “rebuilt” in the Overcooked 2 engine, so it looks better and feels more responsive.

The All You Can Eat sheen is definitely felt in Overcooked 1, and I appreciate having every bit of this (mostly terrific) content in one place. This is a fantastic entry point if you either missed the original, you haven’t played it in years, or you skipped the Overcooked 2 season pass content (some of the very best levels). We burned through OC1 in one sitting, OC2 in another, and now we’re rediscovering the horrors and joys of delivering dishes while repairing zombie-smashed doors in “Night of the Hangry Horde.”

Circling back to those seven exclusive levels, expect them to put up a fight. One, in particular, makes clever use of a ship cannon that serves a dual purpose: firing a player with a finished plate in hand while simultaneously knocking back a floating platform to let another player access the ingredient bins. In my experience, you won’t want to start jump into “The Ever Peckish Rises” until you shake off the rust.

If you’re wondering if Overcooked: All You Can Eat is worth getting for your PS5 or Xbox Series X while the games are very fresh on your mind, here’s my advice. For most people in that scenario, minus hardcore fans and families with kids, I’d hold off until there’s a sale. I think this two-game-plus-DLC package is worth the money in general, but for super-familiar players, it’s a tougher sell at launch.

There’s something so magical about the way Overcooked mixes simple cooking instructions with frantic stage hazards that require verbal check-ins between co-op players. I can’t get enough. I’ve lost track of how many times I’ve beaten these games, and it’s a testament to their design that they still hold up so well. If you’re hankering for more happy, shouty, don’t-blame-me vibes, All You Can Eat feels definitive.