This can’t be the end

I’m not ready for Overcooked 2 to come to an end. That’s how I felt going into Carnival of Chaos – the third and final DLC in the game’s season pass – and that’s how I felt after finishing it this weekend.

Overcooked has become my favorite co-op experience of the generation. Some of you share that sentiment, and some of you never quite gelled with it the same way. I think we can relate on a base level, though – we all have a go-to game that brings us closer to our friends, families, and loved ones.

For me, this is it. Nothing else can top it. Overcooked 2 is exciting and stressful and satisfying, a formula that has continued to work its magic over the course of these expansion packs.

The game gives everyone ample opportunities to make a difference – both as an individual and as a team player. You can keep your idiosyncrasies, you can play like a total maniac, but you’ve also got to be in tune with each other. You can’t stay silent. You can’t do your own thing. To truly excel, your group needs to develop its own shorthand, and figuring mine out over the past year has been an absolute joy. 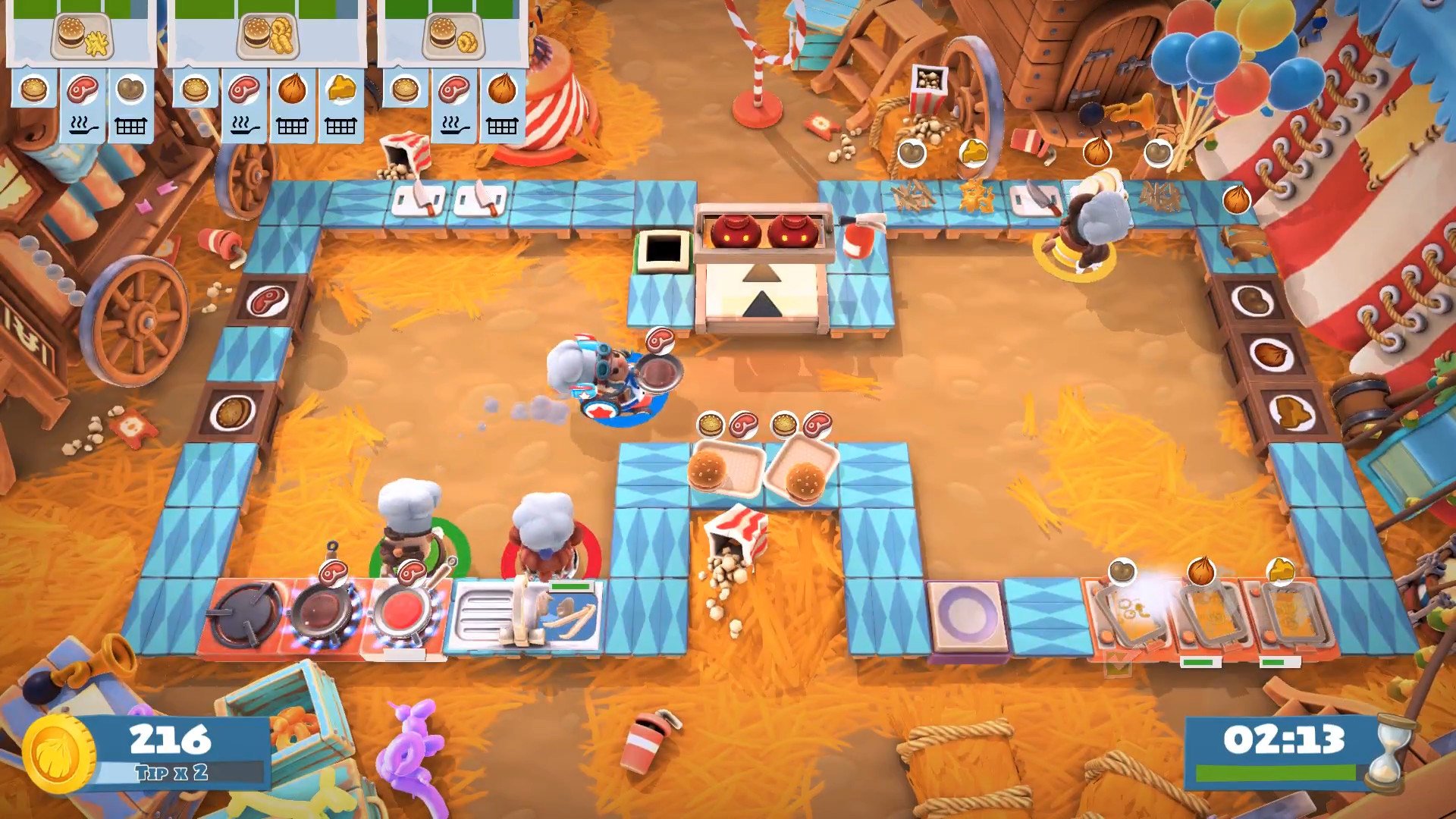 If you’re already as invested in Overcooked 2 as I am, you probably bought into the season pass a while ago, and you don’t necessarily need to hear my assessment of Carnival of Chaos one way or the other. But I do think this particular DLC could stand to benefit from an “expectation reset,” so to speak.

Coming off of Night of the Hangry Horde and Campfire Cook Off, this feels like a noticeable step back, to put it bluntly. Whereas those DLC packs had a strong sense of identity and new mechanics that felt meaningful and true to their theme, Carnival of Chaos plays it safe. It lacks that same impact.

There are genuinely good ideas in here, to be sure. I love the new condiment dispenser and the soda machine, both of which benefit from careful communication. To finish certain hot dog orders, you’ll have to tap a button to cycle through ketchup and mustard as needed, and the same goes for combo meals, some of which require a specific sugary drink (denoted by color) to make your customers happy. This should go without saying by now, but the cycle button is usually found nowhere near the machine it affects, so it often falls on you hollering at your partner to help get the job done efficiently.

Cannons are a two-person operation as well, and I wish they were explored more creatively. They’re used to great effect in a tricky level comprised of a bunch of tiny walled-off rooms, but that’s about it, really. Launching yourself out of a cannon takes more time and communication than casually strolling through a portal – you have to manually aim the thing, hop in, and wait for your partner to fire you – and it’s a shame Carnival of Chaos doesn’t leverage this concept to its full strategic potential.

That’s how I’d sum up the DLC in general, I think. There are fifteen levels, three of which are standard-issue secret Kevin stages, and if you’re an experienced Overcooked 2 player, you can expect to breeze through all but one or two of them. Other than a particularly demanding level involving lots of food trays and not enough space to safely juggle ingredients near pitfalls, it was all smooth sailing for me.

Carnival of Chaos isn’t a bad set of stages, don’t get me wrong, but it ends up feeling insubstantial and by-the-numbers compared to everything that has come before it. I hope this isn’t the last we’ve seen of Overcooked 2. I’m not tired of playing this game, and it deserves to go out on a higher note than this.