I didn’t even last ten minutes into my first session with Outer Wilds, the intriguing open-world adventure game from Annapurna Interactive and Mobius Digital. A freshly minted astronaut from the tiny world of Timber Hearth, I took a bit too long admiring my spiffy new spaceship on the platform, before accidentally stepping off the edge and falling to my demise.

I made it all the way into space the next time, even landing on the moon to visit a local named Esker, but I got too caught up launching space probes at my campsite back home – while listening to Esker’s whistling – that I didn’t notice the sun exploding until the shockwave engulfed the planet.

Needless to say, I haven’t been the most successful space explorer in Outer Wilds‘ history, but the beauty of it is that I’ll get there eventually, 20 minutes at a time. 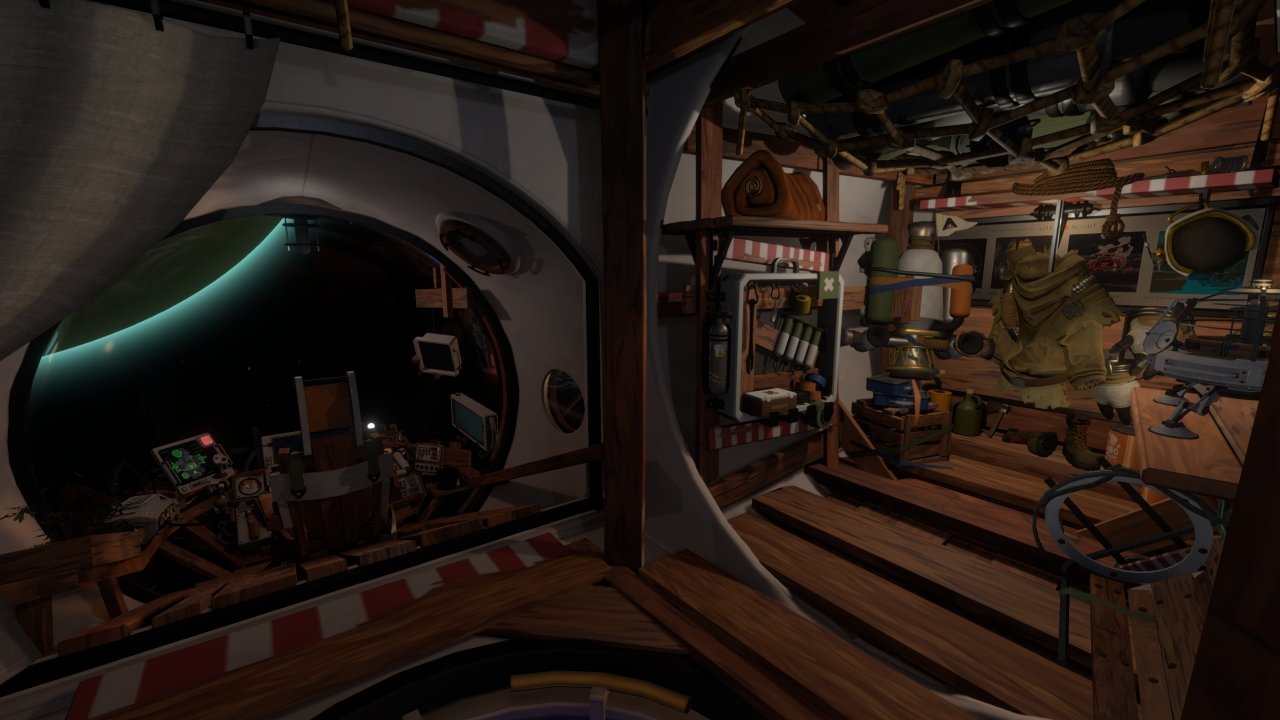 Of course, It’s not all about dying horribly, though one’s repeated, often ignominious demise is a major means to an end in Outer Wilds. After all, how else does one deal with the sort of Groundhog Day-style time loop that entraps the game’s setting?

As the only member of the Outer Wilds Ventures exploration crew that remembers what happens across each loop, players must spend 20-odd minutes – the time between waking up to roast marshmallows before your first flight… and the sun exploding –  exploring the solar system as much as they can in search of answers and adventure.

And what a solar system it is. Unlike the algorithm-inflected environs of vast games like No Man’s Sky and Elite Dangerous, Outer Wilds‘ solar system is bespoke and intimate in scale, its aesthetic sense informed by a cartoonish, almost childlike understanding of astronomy. Here, rounded edges, clunky charm, and evocative, archaeological mystery take precedence over sleek technology and photorealism. Heck, your trusty spaceship is made of wood. Its launch tower is flammable.

In Outer Wilds, individual planets are tiny, not much bigger than the likes read in The Little Prince. Each location is unique and varies wildly, from the placid forests of your starting location at Timber Hearth, to the collapsing caverns of Brittle Hollow, to the storm-wracked, waterlogged Giant’s Deep, to the Hourglass Twins, a pair of planetoids that constantly shift huge tracts of sand across their shared orbit.

All these bodies (and more besides), move according to schedule, with various events and developments seeming inevitable on the course to the sun exploding. This schedule, and gaining a sense of it, is key to solving the game’s many mysteries. By this time most of Brittle Hollow will have been imploded into the black hole at its center, meaning you have to explore and visit key areas before everything’s swallowed up. On the other hand, the sand flow from one Hourglass Twin to the other won’t expose these important ruins until this much time has passed, meaning you’ve got to wait for a bit before you can hunt down that last clue. I’m just scratching the surface of the events that occur in Outer Wilds‘ solar system. I’m wary of revealing much more, considering how much of the game’s joy is in finding things out for yourself. 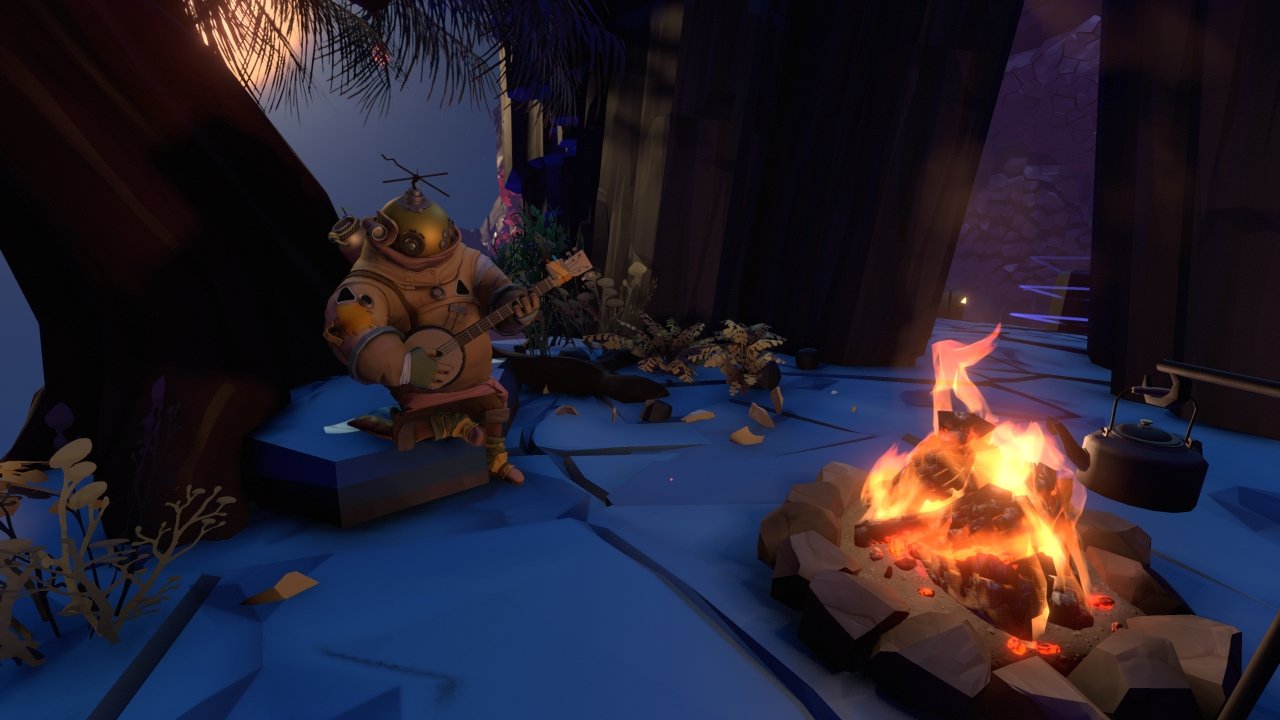 If this sounds a bit like a Deus Ex-style immersive sim, except wrought over the scale of a planetary system, you’d be pretty close. Outer Wilds‘ game world is wound like a tightly packed cuckoo clock, all interlocking components whirring endlessly on a 20-minute window of inevitability. The only loose elements, so to speak, are you, your trusty spaceship, and a few exploration tools. Tools such as a signal antenna, a portable spaceprobe launcher, and a translator gizmo to interpret the scrawls of the ancient aliens, whose ruins are scattered all over the system.

That said, Outer Wilds isn’t a “role-playing game” by the commonly understood definition. There’s no progression system, no perks to unlock, no side missions to grind, no quest-giving NPCs. The only “XP” you earn is the “experience” of seeing through each loop, starting over with new hints as to how to proceed next time. A helpful ship’s log does provide some support in the form of a spiderweb-like network of related hints, as well as a telltale icon indicating when you haven’t quite collected every possible clue in a given location. 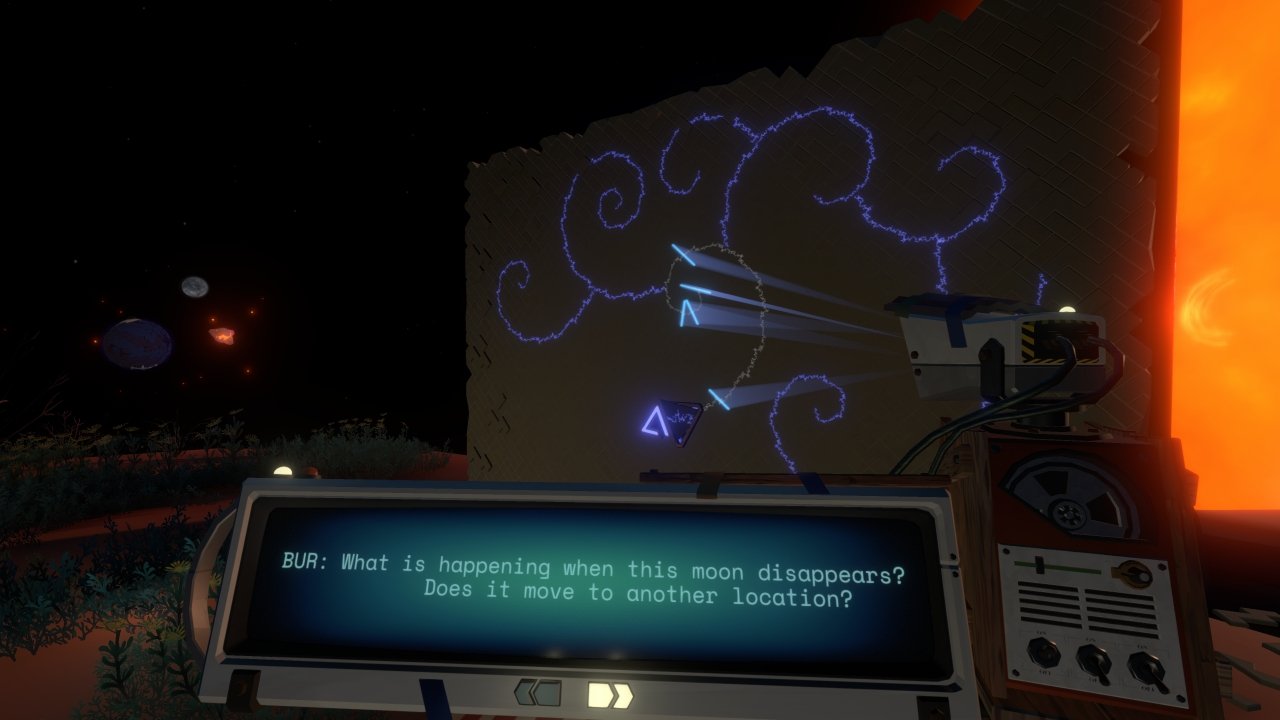 The journey may be a blast most of the time, but it’s not without its bumps, of course. The log might be helpful, but as you close in on the last clues you need to solve a puzzle, or break into the toughest or most tightly-timed areas, frustration can set in. There are points where I really would’ve appreciated a more explicit (but optional) hint system, a button to press when I’m really ready to admit defeat, but not quite ready to ask someone to spoil it for me. Outer Wilds’ use of semi-realistic physics in the spaceflight model could be challenging for some players with motion sickness, or even just those trying to get by with a keyboard and mouse rather than a gamepad. Quibbles like that don’t damage the joy of exploring the universe they’ve created, though.

Outer Wilds proves there’s still a sense of genuine adventure to be gained from games that commit to a set, fixed structure and design, rather than the kind of sprawling, endless expanses many contemporary titles set out to become. Playing it brought to mind my favorite bits of Dr. Seuss’ Oh, The Places You’ll Go…except with more of the sun exploding.