We don’t often have guest reviewers at Destructoid, because we need to offer the utmost credibility when analyzing a game in a critical light. However, there is no one more credible than my Uncle Nachos when it comes to the Gradius series. While I personally have been awaiting the series spiritual successor Otomedius Excellent since I saw it at E3, this event means a lot more to my uncle, who is a dedicated fan of Konami’s shooter series.

So, for this one time only: Climb aboard Uncle Nachos’ magical anime-boobie ship and blast off into a land of super credible critical analysis. It may just change your life forever.

Hi there. My name is [redacted] but you can just call me Uncle Nachos. Since the ‘80s I’ve been a Gradius super-fanatic! For you hot ‘n sexy youngins (HEH) that think shoot-em-ups are some sort of military shooter where you shoot foreigners in space, you are sorely mistaken. Back in the day, vertical and sidescrolling shoot-em-ups ruled the arcade, but above all it was Gradius and its sequels that entranced me the most.

I only got out of the state penitentiary eight months ago, so I’m a bit behind on what happened to my beloved Gradius series. A friend in the pound, Lil’ Yo, told me that Gradius V was the last one he played and it was one of the best PS2 games in existence. I sure would like to try that, but I only have a Xbox 360 at my papa’s place. Imagine my surprise when I heard of Otomedius Excellent! 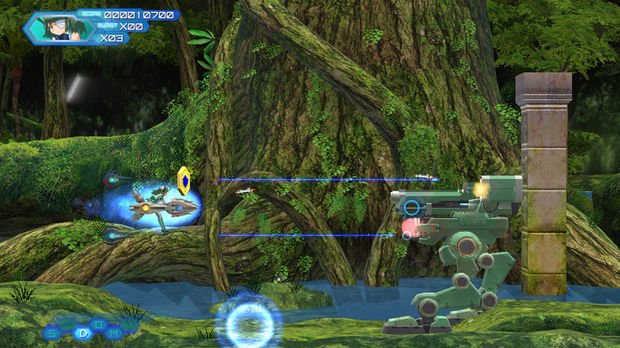 Otomedius Excellent is everything I love in life: Gradius, graphics, and cute little girls! Hehe! Not since I laid my hands on [redacted], have my palms been so wet and sticky to get a hold of a babe. I should say “babes,” because Otomedius offers many choices of quality women dressed in attire that is perfectly suitable toward my tastes. As a collector of [redacted] porn, it really makes me feel right at home. I also appreciate that the menu screens are navigated with a cursor mapped to the right-stick and A button; this leaves my other hands free for extra fun! 😉

Don’t pull your pickle out just yet, guys, because this little whore ain’t the woman she used to be (if you know what I mean!) Sure, Gradius‘ unique upgrade system, that lets you choose what ability to unlock by spending collected points, returns. As does the ship customization options that let you alter your loadout before a game. However, Otomedius lacks the tight controls, imaginative levels, and challenging bosses I expect of a Gradius title. 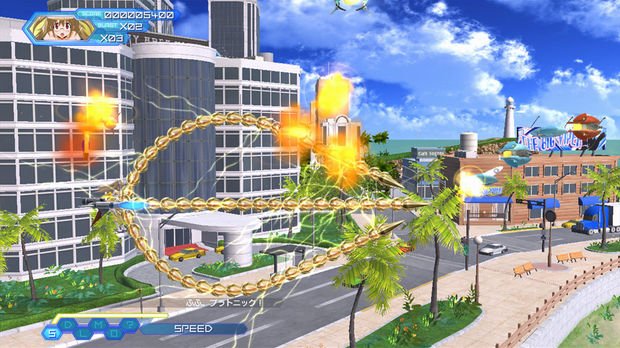 I’m as big a fan of big-boobed girls in tight ships as the next guy — OK, maybe not as much as my ex-cellmate ‘Jackin’ Jojo — but Otomedius looks like ass and probably would taste like one if you could bite into it. Along with the excellent Gradius series, Konami had a goofy, surreal spin-off series in the ‘90s called Parodius. Otomedius doesn’t have the imagination or spectacle of Parodius, nor does it have the atmosphere and smart design of Gradius. It stands in between the two as a very average shoot-em-up that happens to feature some lovely ladies that I’d love to fly around in my cockpit (HEH!)

I admit that I’m new to using a Xbox 360 controller, but damn if these ladies aren’t as slippery and wet as a walrus’ throat. One tap on the left-thumbstick sends your lovely gal a couple positions foward, making for some very choppy action. I felt my chub going flat in my skin-tight cougar pants, as I tried to acquire the pin-point accuracy the game’s bosses demand. This problem only gets worse as you upgrade your speed, making it possible to fly across the map in a milisecond like some sort of disco-club methhead who just fisted a bag of angeldust into his rectum. 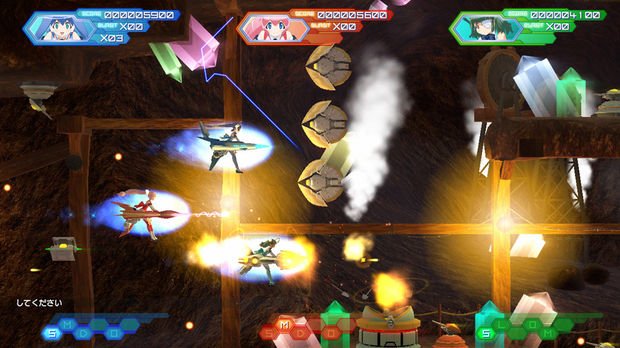 On top of being a very lousy game, this console port is a technical mess. There are slowdown issues, the default button placement is awkward, and you can’t access any options mid-game. Like its arcade predecessor Otomedius G, Otomedius Excellent is about as pretty as a beatdown crackwhore popping a squat next to a dumpster outside a Denny’s (reminds me of last night, hehe). Deathsmiles II, another shooter from this year which features some very young and lovely ladies, also resembles a Dreamcast title, but it managed to still offer good art direction and some nostalgic eye-candy. Otomedius just looks flat-out bad, although the later sections in space look alright. I mean, how can you make space look anything less than alright?

The game includes leaderboards — which you can organize by birth month for whatever reason — online/offline three-player co-op, and video replays. These are to be expected of a retail release for a game that could have very well been a downloadable title. The game still feels like a rushed port. This is most evident by the awkward menu navigation and the lack of English voice-overs. 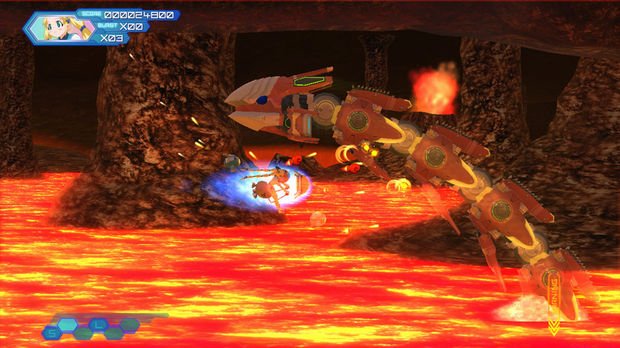 It’s as if Konami hit its head on its crackpipe (HEH) and forgot how to make a good Gradius game! The bullets often blend into the colorful backdrops, making them hard to see: C’mon, this is basic! I never played a shooter before that I wanted to end so badly. The game’s final two stages are the most awkward of all, since they throw a cavalcade of bosses at you that all share a similar weakness. Sure, I find that hot little big-boobed cat-pirate anime babe boss enticing but I’d rather serve another five year sentence than play through this game again. It’s a trap!

Look, I spent five years in jail for the distribution of [redacted] so I can understand If you are in dire need of some anime boobs. Sometimes a man needs some lovely ladies to accompany his shoot-em-up action. But I highly recommend seeking out Deathsmiles I & II and Trouble Witches Neo! before bringing this ugly, confused game back to your place for some potentially incriminating fun.

If you guys have any questions about Otomedius, the classic Gradius games, or how to pick-up chicks on Craigslist, feel free to shoot away in the comment section below. And thanks again to the Dtoid guys for letting me offer some old man insight. You guys rock! <3  ~UNCLE NACHOS~