The mysterious strategy rhythm game Orgarhythm is here, and boy does it have a pedigree. First you have Tak Hirai (Space Channel 5 Part 2, Shenmue, Meteos) at the development helm, and Ayako Minami in charge of music direction. Then you add equal parts Acquire and Neilo, and stir until you have a concoction of hype.

Orgarhyhtm is a mix of rhythm and strategy — two genres that don’t normally take place in the same space. The development team has stated that the marriage is a bit hard to explain, but I don’t think it’s too difficult a concept to grasp, provided you have experience in the genre. To be blunt, it’s a 3D Patapon.

You with me so far? Onto the game! 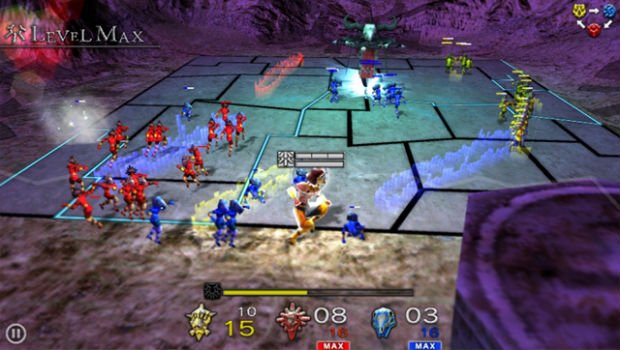 Orgarhythm functions very similarly to a lot of classic RTS games, but there’s one major caveat: you play the role of a god controlling your army, and that god walks a set, non-negotiable path through each map. As you stomp through each area, you’ll have to take things on as they come, as you don’t get a zoomed out view of the rest of the world — as a result, things are very frenetic, and more action-oriented than most strategy titles.

The god is able to deal with his enemies with his three troop colors: blue, red, and yellow. Blue counters red, red counters yellow, and yellow counters blue. All of the enemies are set up the same way, so you’ll have to order them accordingly to both take out opposite colors and stay out of harm’s way when the AI sends counter forces back at you.

For instance, you may need red melee troops at the drop of a hat, then quickly order out some blue ranged troops somewhere else on the map. On higher difficulty levels, it can get intense, and as a result, more satisfying. Even though he is essentially on-rails, the god himself can use five abilities, which range from buffs, to heals, to a “heavenly bolt” attack. Your god does have a health meter — if it reaches zero, the game is over.

To order your troops around, you have to hit their icons with the beat, earning a “bad,” “good,” or “excellent” rating for each choice. If you hit all “excellents,” your troops level up and grow in number. I can’t stress how cool this is, as it keeps you on your toes constantly. If you can’t keep a beat, your army is going to be weak, and you will struggle. As you can imagine, Orgarhythm is best played with high-quality headphones. 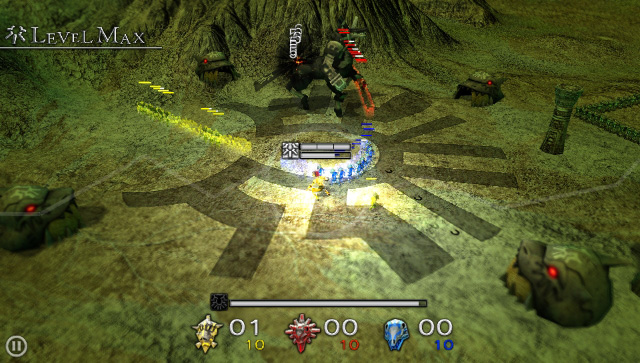 Once you get used to it, it’s not terribly taxing. All you have to do is choose your color, type, and tap the area where you want them to go. If this does sound too confusing, there are 10 tutorials to get you acclimated to how the game operates, so it doesn’t just throw you to the wolves.

First thing you might notice after jumping in is that there are no button inputs. Everything, even the menus, are controlled entirely with touch controls — and you know what? They actually work pretty well. When you hit that groove, and everything comes  up “perfect,” Orgarhythm is not only fun, but it’s rewarding as well — kind of like a tactical Demon’s Souls.

Each stage features the god stomping through the level to the beat, encountering various enemy troop types (which mirror your own), until you reach the boss encounter at the end — which, in my opinion, is easily the best part of the game.

Boss fights get really intense, to the point where you’re ordering all three colors around at breakneck speeds, changing their tactics, positions, and troop type on the fly. They often take you by surprise as well; the big bads themselves are varied from stage to stage, all of which require different tactics.

For a musical game, the soundtrack obviously has to be good — thankfully, it’s beautiful. Featuring a solid selection of electronic and rock tracks, the music will not only get you pumped, but ease you into hitting the beats at the right time. Oh, and the better you do, the more musical tracks are laid onto the level. Ayako Minami’s experience really shows here and I’m eager to pick up the Orgarhythm soundtrack as we speak. 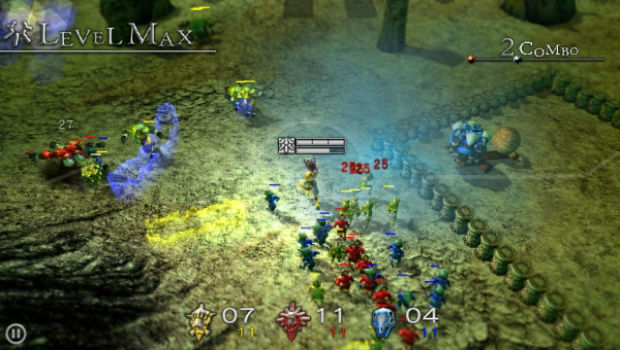 The only major problem, gameplay wise, is that doing the same thing over and over can be draining if you don’t increase the difficulty. At the end of the day, like most strategy games, you can still distill the experience to “ordering around troops,” and with the god’s limited role/requirement to stay on-rails, gameplay variety isn’t really the name of the game here. More than a few times I found myself putting the game down for a while — but when I reached those boss fights, it was all worth it in the end.

Additionally, Orgarhythm is very short. (On normal, you can beat it in under five hours.) So unless you plan on going the score attack/completionist route, you probably won’t get your money’s worth. If you choose to dig, however, you’ll find a ton of new skills to earn (48 in total). There’s also a Co-op and Versus option available via ad-hoc local play, but sadly, I was not able to test this out since I don’t know anyone within 20 square miles that owns a PlayStation Vita.

If you’re willing to go at it again and again with Orgarhythm, you’ll find that it’s a pretty rewarding experience, and you’ll have a ton of fun in the process. Sadly, your purchasing options are limited: you cannot obtain the game through retail means in the US, as it’s only available via download.