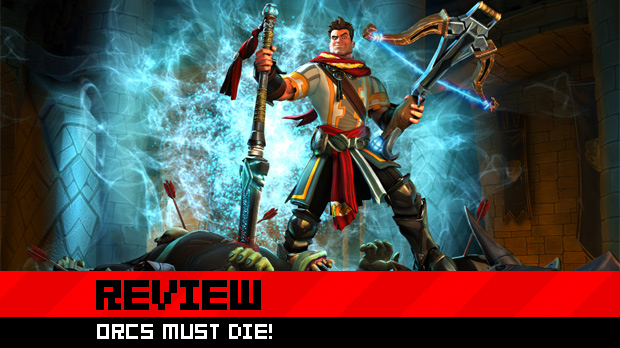 Lately we’ve seen so many twists on the tower defense genre that it almost feels like we should come up with a better name for it. Anomaly Warzone Earth turned you from a defender into an attacker, while Sanctum added first-person co-op gameplay. Then there are the more third-person action-RPG variants, such as the upcoming Dungeon Defenders.

Orcs Must Die! shares the most of its mechanics with the latter, but trades cooperative play for a wealth of content. It does so with a genocidal smile and a hearty chuckle, and behind its back it hides a mace to smash your head in if you expect to simply breeze through yet another tower defense variant. 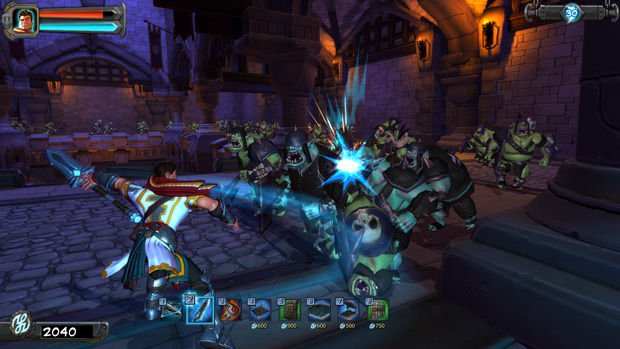 Orcs Must Die! centers around a stubborn and incompetent War Mage apprentice who, unfortunately for everyone involved, ends up being the realm’s last hope in defense of the unending orc hordes. Sadly, everyone else who was capable has already died.

Story be damned, Orcs Must Die! is about orcs that must die, and die they will. As the apprentice you’ll run around a level with your magical crossbow and a customizable mix of weapons, magical artifacts, and traps. If you want to take the direct attack approach, you have the option to place some slowdown traps and then hack, shoot, zap, freeze, or burn your foes to bits. Should you die, however, you’ll be reborn at the “Rift” you have to protect, at the cost of five Rift points (i.e., health points).

While the direct attack option is there, you would be an idiot to just run in hacking and slashing in a tower defense game — even if it’s a variant on the genre — without paying at least some attention to how you are going to use your 17 traps and survive. 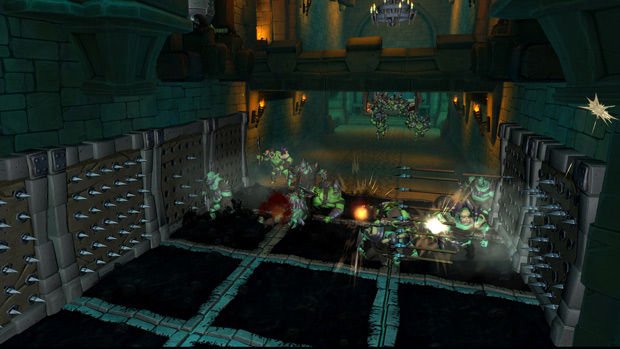 The traps in Orcs Must Die! are about what you’d expect from a game set in a medieval fantasy world. (That is, if you spend a lot of your time thinking about ways to kill orcs in such a world, and who doesn’t?) Spikes, arrows, giant swinging chains, burning coals, wall blades and grinders, and even catapult pods that propel orcs into pits of doom all make an appearance.

Some traps can only be placed on the floor, while others fit on walls or on ceilings. This means you have to design a path of death by keeping in mind how the orcs are going to approach your Rift, thankfully indicated by small blue lines that keep flowing from the level’s entrances. Barricades can divert the path of incoming waves so the enemies walk over skewering and burning paths, get ground by giant blades, then stomped to bits by a giant crushing ceiling panel, only to finally get shot in the face by a volley of arrows from a wall trap and by the archer defenders you placed on high walls. It’s a marvel to see the resulting carnage of your work — and gore can be turned off for the faint of heart.

Meanwhile, you have your trusty crossbow to deal damage from a safe distance. Every consecutive shot further decreases its accuracy, but a well-placed headshot instantly kills any type of enemy except the fearsome giant ogres and gnoll hunters. Walking around does nothing to impact your accuracy, however, so within half an hour you find yourself timing your shots in a rhythm of headshots, thinning out the horde while your traps hopefully do the rest.

If enemies do get past you and your traps — and they will — using the alternate fire of your crossbow will stun enemies in a small area so you can take them down before they reach the Rift. Likewise, magical artifacts will have a direct attack like a fireball or a bolt of chain lightning, but their alternate fire will lay waste to anything that passes through an area for about five seconds. These alternate attacks also cost you almost all of your slowly regenerating mana, making it a tactical option for orc genocide or a field of death to lay down at one entrance while you focus on another one. 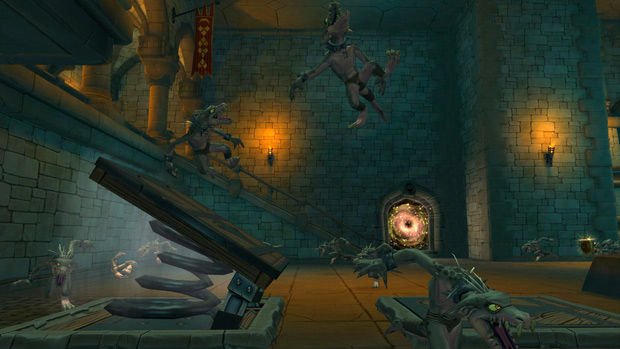 When everything goes according to plan, and all orcs, gnolls, shamans, and other enemies go along with your designs for their imminent demise, Orcs Must Die! is a blast to play and at the start of the game it’s even a bit easy. The first few levels introduce you to the basics and each new level unlocks a new trap or magical artifact to use, but it’s all relatively painless to play through. A couple of levels in, this changes dramatically.

Some levels will ramp up the difficulty immensely, making you pass a level by the skin of your teeth or simply failing it altogether. Most of the difficulty stems from having multiple paths to deal with, without knowing where the first wave will come from and without the resources to either defend both paths or barricade one of the paths to divert or stall a wave. The next few levels can be a breeze to finish without losing a single Rift point, only to be followed by yet another ridiculously hard level. It does help you to rethink your strategies and to learn more about your traps’ strengths and weaknesses, but the pacing of the difficulty can be absolutely brutal at times.

As you progress, you’ll also gain access to Weavers, sorceresses who are really little more than unlockable skill-trees. You can only choose one to support you in any level, but more often than not it pays off to invest in the bonuses to traps and archers, spellcasting, or personal buffs, respectively. Because you need to choose which traps and items you want to use at the start of a level, with no option to swap them out once you’ve placed your first trap, and because you only have a limited amount of slots to assign, the amount of puzzle pieces to solve a really hard level can be daunting at times. You need to choose the right tools for the job, choose the right Weaver (if you choose one at all), manage your resources correctly so no wave will overwhelm you, and continuously keep scoring headshots with your crossbow.

With so many options and so many ways to approach a level, it borders on overwhelming more often than not. For some reason the game never tells you what the next wave will consist of, nor does it tell you from what direction they will come next, which can lead to some trial-and-error planning when it could’ve easily removed that out of the equation. There’s little more frustrating than reaching the last wave without a scratch, only to find out you were ill-prepared for a bunch of giant ogres that take forever to manually take down, while a small group of orcs runs past you as you fight and sneaks into your Rift to ruin your score. Similarly, sometimes you can block off a path with barricades to funnel multiple waves into one long path and sometimes the orcs will destroy these barricades and flush through, but the game doesn’t clearly tell you when that is the case. 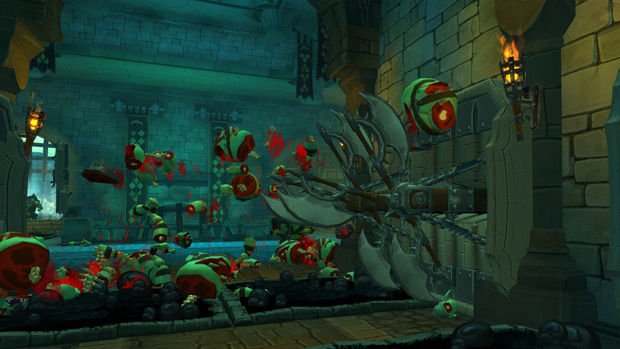 Despite some frustrations with several difficulty spikes, Orcs Must Die! will start to grow on you. All the traps you unlock are yours forever, making it fun to go back and earn more “skulls” in levels you previously only barely passed. These skulls in turn can be used to upgrade traps, making you be better prepared for levels yet to come.

When you finish the game’s 24 levels, pressing “Continue” will simply show you a cutscene to end the story. The game then immediately puts you in the first level on the even more challenging Nightmare mode. You might think it will be a breeze to run through the first couple of levels, and at first it does feel rather easy, but soon enough you’ll start to run into trouble yet again as progressively tougher waves break themselves on your defenses.

While Nightmare mode’s difficulty provides more challenges and more content due to the new waves for levels you previously played, the scores for the levels — each with their own leaderboards for different difficulties — add another replay factor. Even just playing the first level on Nightmare put me near the top of the leaderboards — simply because at the time there weren’t a lot of people who reached that stage yet — and despite not caring about my score on the normal War Mage difficulty before, I was suddenly paying close attention to it.

If you aren’t a score-mongerer, then Orcs Must Die! isn’t going to change that, but the leaderboards do tempt you to replay levels and improve your strategies just because you know it’s possible to do better. Moreover, between the new waves and having all your traps at your disposal, Nightmare difficulty essentially more than doubles the game’s regular length. 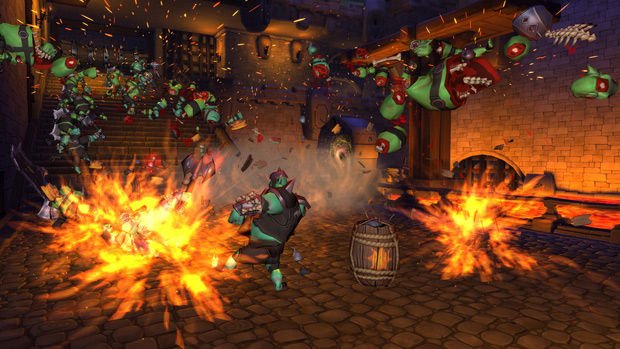 There is a lot to Orcs Must Die!, even if all you do is play through a few dozen levels creating the ingredients for the world’s biggest orc stew. The game can sometimes be punishing to a fault, but if you are up for the challenge it’s never impossible to beat. While Orcs Must Die! can be a fun and challenging romp on the default difficulty for most players, mastering Nightmare difficulty adds so much more for tower defense enthusiasts that it becomes well worth the 1200 Microsoft Points if you’re looking for a meaty downloadable game in this genre. Alas, it is a bit disappointing that there is no co-op mode when the game with its multiple waves and paths feels made for playing together.

Below its cartoony surface and morbid fascination with killing orcs in as many brutal ways as possible, Orcs Must Die! is a surprisingly deep and challenging game that begs you to delve into it and slaps you until you do it right. The occasional difficulty spikes and the wealth of tools at your disposal may overwhelm some players at times, but fans of the genre can sink their teeth in enough content to keep playing it for hours on end.

For the latter kind of players, any of the gripes with frustration caused by trial-and-error designs will vanish in the face of the sheer amount of time you’re going to spend fully completing it — and the fun you’ll have as Orcs Must Die! tempts and taunts you.

Filed under... #Orcs Must Die!#tower defense