Tokyo RPG Factory has a track record. Now I can’t really use a qualifier in that statement, because it’s really hard to actually track!

I dug I Am Setsuna, but a lot of people didn’t. I thought Lost Sphear was alright, and some folks shared that sentiment. That same liquid judgment is going to fall upon their third effort, Oninaki. 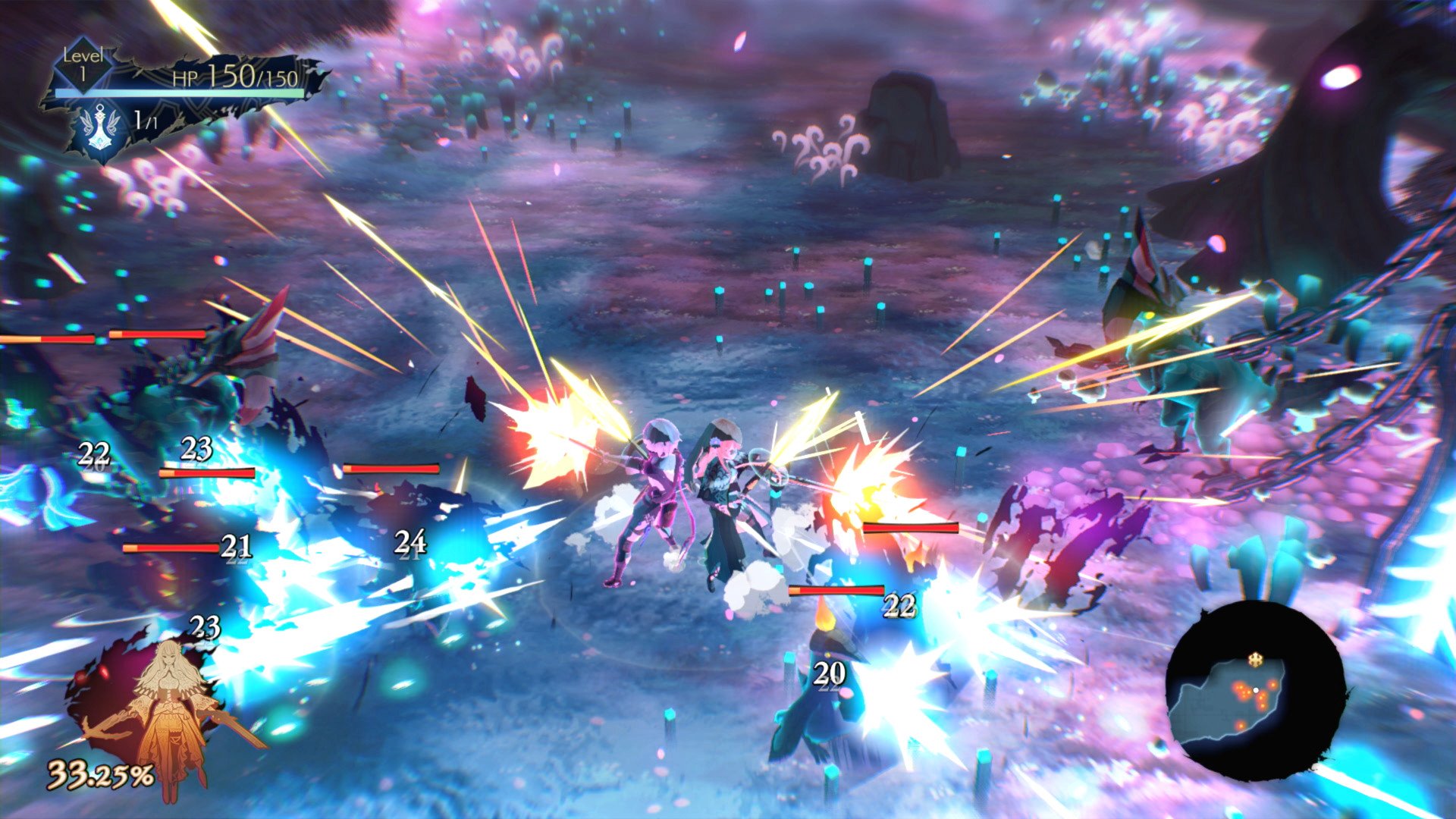 I’ll tell you upfront: I’m really, really into spiritualism in stories, and Oninaki kind of just drops you in the thick of it.

As a Watcher, it’s your job to ensure that spirits are properly ushered into the underworld for reincarnation, which you just so happen to be able to commune with. But the second part of the gig is a little more insidious, as you also double as an inquisitor of sorts, dropping judgment and policing how people die. This concept is best explained in the opening moments of the game, where you meet a ghost boy, then kill his parents (on request) so they can be with their son. Your next job is to investigate a string of suicides.

Oninaki has the perfect opportunity to tell a heavy story, which is kind of what Tokyo RPG Factory does best. Death and the cost of life are the core themes of the studio, and they explore them once again valiantly. Where everything starts to slip is in the actual game part, which in this case is mechanically set up akin to an action RPG such as Secret of Mana.

Now, thereâ€™s potential on paper. Your Watcher has the power to not only slip in between the world of the living and the spirit plane, but can also team up with “Daemons,” who serve as a sort of Persona-like combat partner. All alone your sword swings aren’t all that up to snuff, but combined with your Daemon, anything is possible (like dashes, Devil Trigger-style super explosions, and all sorts of cool powers that wipe screen fulls of enemies).

At first you’ll start with a samurai swordsman style Daemon that’s heavy on evasions. Shortly into the story you’ll pick up a lancer (think Final Fantasy‘s Dragoons) archetype, then a dual crossbow job, and so on. The ability to swap between them at will is cool enough, but what I really love is that these Daemons are actually lost souls who can’t fully recall their past. Tokyo RPG Factory went the extra mile and incorporated them into the themes of the game, best exemplified through the extra cutscenes that assist in discovering their backstory.

It doesn’t all work out from a gameplay perspective, as there’s some highs but many lows. Using a cross slash ability to cut through a group of enemies, triggering an arcadey “level-up!” prompt feels great. As you slowly unlock abilities that grant bonuses for strategically swapping Daemons, as well as passive bonuses for having certain party members in your team, the strategic element at play starts to come together. But the thing is, there isn’t really anything interesting to use all of your cool toys and kit on.

Instead of giving us unique boss fights upfront with humanoid opponents, those are merely teased as you go toe-to-toe with giant crabs and bugs with rote ability rotations for what feels like ages. Enemies mostly consist of characterless moths and penguins, even as you shift polarities and enter the spirit world; because outside of the story bits there really isn’t much a difference between the planes on a mechanical level. Oninaki tries to justify it, typically inserting a nominal altered state for the spirit realm (like more knockback damage) but it ultimately ends up blurring together and feels like a missed opportunity.

Plus, when a game with a heavy action focus has you teching into combo and ability cancellation eventually, you know you’re going to have a bad time. This is not to mention the very off hit-boxes for some techniques. It’s a shame, because the whole vibe of crossing worlds at will rocks, complete with iZombie-esque (or insert your favorite paranormal detective show [classic genre!] here) investigations that task you with speaking with the dead (or some other dead-related activity) to get to the bottom of situations. 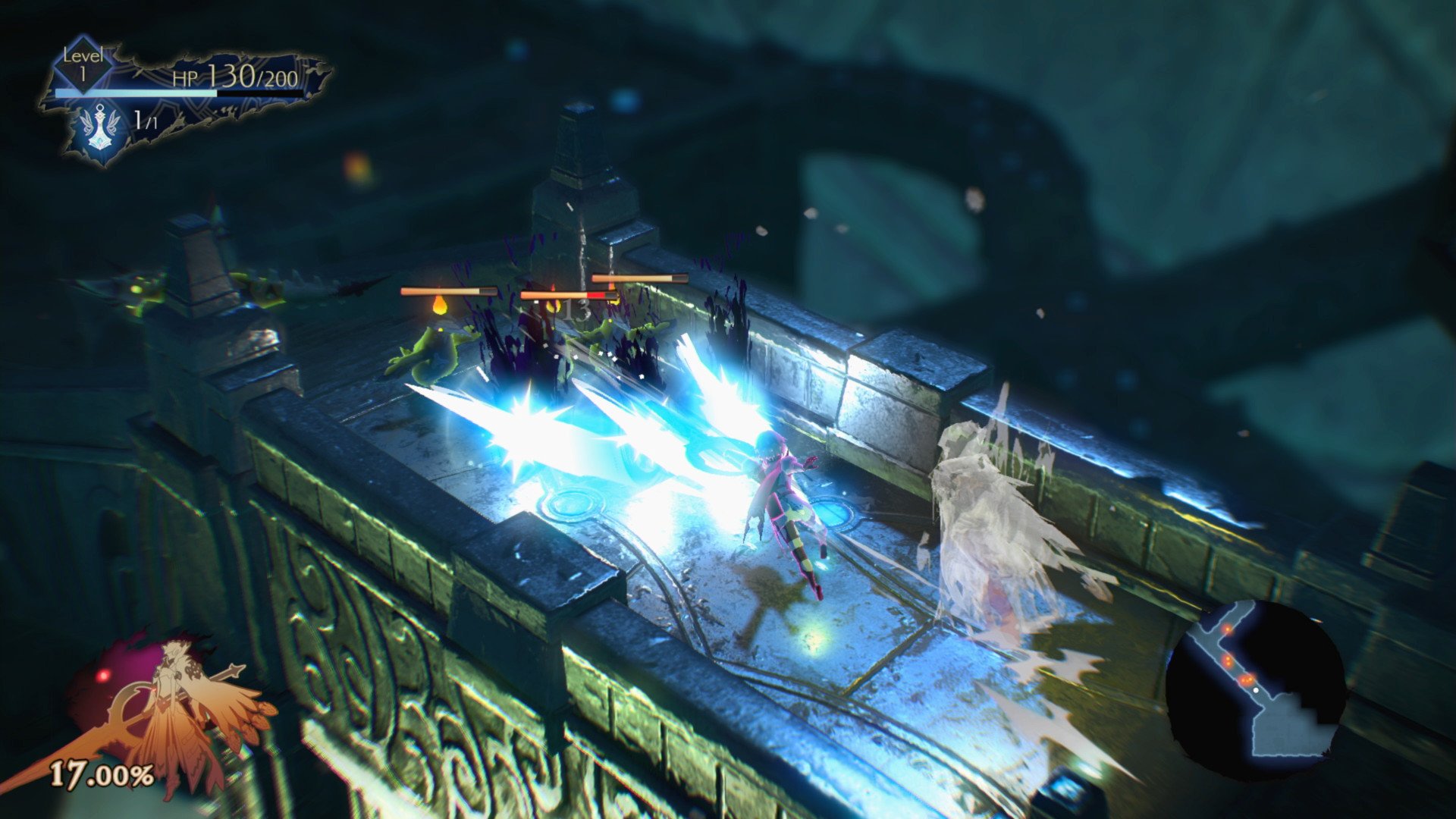 I’m emotionally torn on Oninaki because there’s so much to like here: it has a lot of great ideas, it just doesn’t execute them all as well as it should. Maybe Tokyo RPG Factory should look at changing their formula and scaling down to tighter 10 hour adventures. By cutting down the scale they can focus on what they do best.