From a lacerated sky

In the 1980s, an abundance of horror movies hit the U.K. shores overnight, all thanks to the affordable invention of the VHS player. The then-British film censor, James Ferman, went on a zero-tolerance crusade against these “video nasties” which Ferman felt were oozing onto his country’s shores and slowly corrupting the nation and its youth.

Ferman and the British Board of Film Classification (BBFC) swiftly and hysterically drew up a list of on-screen elements that the board should always consider taking the scissors to – should they ever crop up in any film under review. Among the material Ferman was convinced posed a risk to British sanity were sexual titillation mixed with violence, Asian/ninja-style weaponry, and, most importantly, “blood appearing on breasts”.

Fortunately for Ferman, D3 Publisher’s OneChanbara series would not make its debut until 2004, some years after the censor’s retirement and passing. Given the stringent bullet points listed above, I can’t help but feel that maybe, just maybe, he would not have looked too kindly upon it. 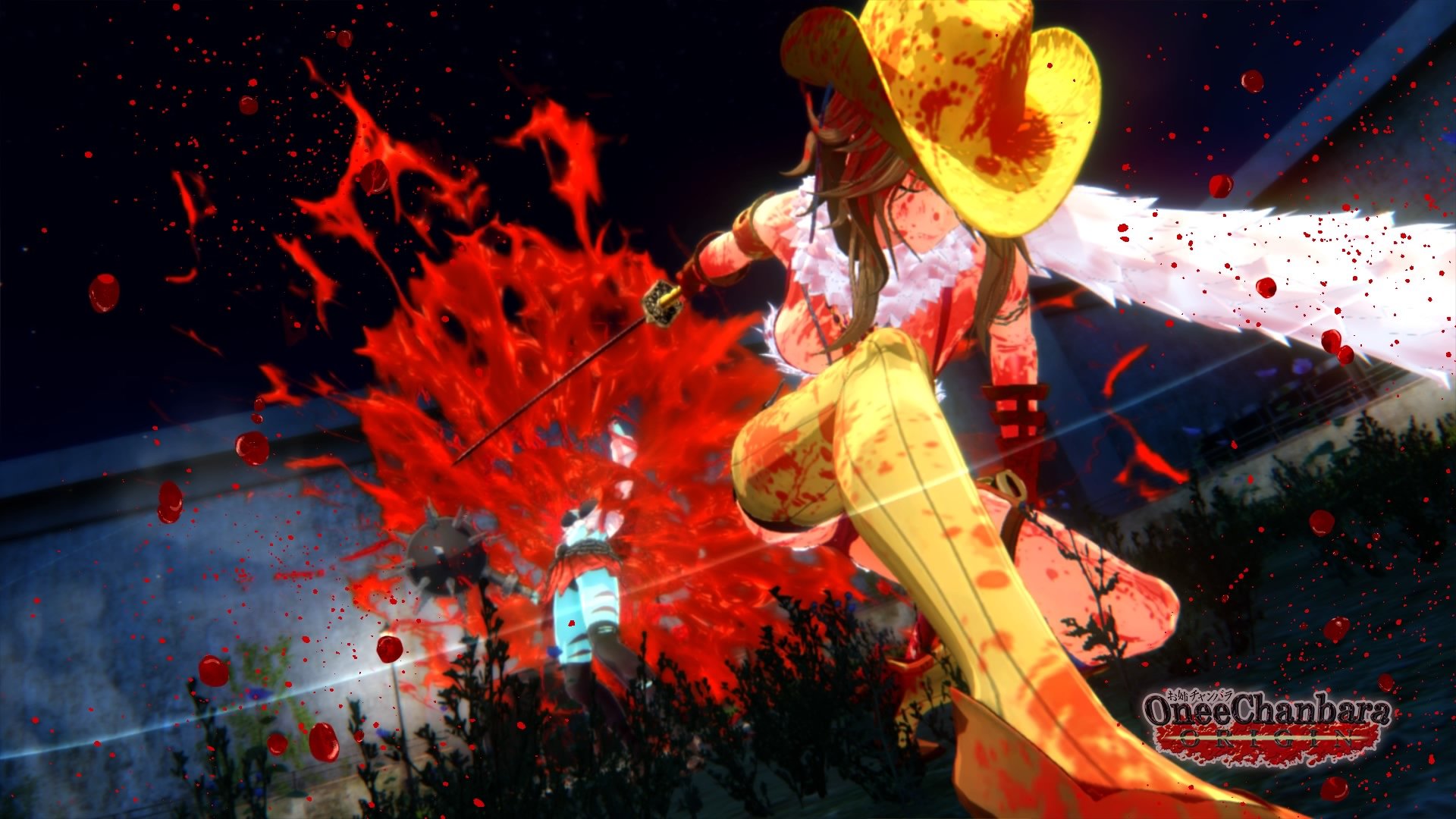 Developed by series veterans Tamsoft, Onee Chanbara Origin is a “soft remake” of two of the Onechanbara franchise’s earliest entries: 2004’s THE OneeChanbara and 2005’s THE OneeChanbara 2. The stories of these former PS2 releases have been smartly fused together into a single entity, then given some storytelling tweaks to iron out the continuity, before finally being splashed with a fresh coat art aesthetic and some attractive new character models.

The OneeChanbara games were early adopters of the “stylish hack ‘n’ slash” genre, as typified by titles such as Devil May Cry, No More Heroes, and Lollipop Chainsaw. As bikini-bearing monster hunter Aya, players cut a bloody swathe through armies of zombies, utilising limb-lopping combos, pin-point button timing, evasive maneuvers, and frame-perfect parries in order to lay waste to hordes of the undead. This results in the surroundings, the camera, and our heroes themselves being sodden in a tidal wave of gore – one of the Onechanbara series’ defining trademarks.

At the end of each stage, the player is graded on their combat skills, taking into account speed, damage, and efficiency. This score is then converted in XP and currency, to be spent on raising Aya’s skills, or at the local store on stat-boosting gems and accessories. As the story progresses, Aya is joined by her younger sister, Saki, allowing players to tag-in the siblings for extended combo potential. Literal sisters literally doing it for themselves.

It can’t be denied that Onee Chanbara Origin offers its fair share of catharsis. Slicing ”n’ dicing zombies, hell-hounds, and other beasties certainly makes for a sadistic way to let off some steam. Slipping in frame-perfect parries, acrobatic dives, and “Cool Finish” maneuvers – all while watching the combo meter rack up triple figures – can be immensely satisfying. Unfortunately, while the visuals have received a meaty overhaul, Onee Chanbara Origin has not made little effort to update its gameplay and, as such, the general combat is a rudimentary and archaic example of the hack ‘n’ slash genre.

Today, Onee Chanbara Origin feels shallow, its gameplay lacking the depth and creativity of the excellent titles that followed in its stead. A serious lack of enemy variety, along with repetitive locations, fails to engage, and while the action does pick up in the latter half of the adventure, ultimately Onee Chanbara Origin’s story mode consists of a series of above-average boss fights, linked by dull waves of cut-and-paste underworld dwellers.

On a more positive note, an excellent job has been done with the visual redesign. The character models for Aya, her sister Saki, Eva, and a slew of boss characters are all very cool, animating beautifully in battle. In addition, the colorful special effects that rainbow out of our girls’ attacks are dazzling, lending a real vista of excitement to the claret-covered chaos. While the resolution appears a tad “fuzzy” – which perhaps prevents the visuals from shining as crisply as they might have – Tamsoft has done a stellar job in bringing the PS2 visuals into the modern era, resulting in a smooth, slick, and attractive-looking remake. 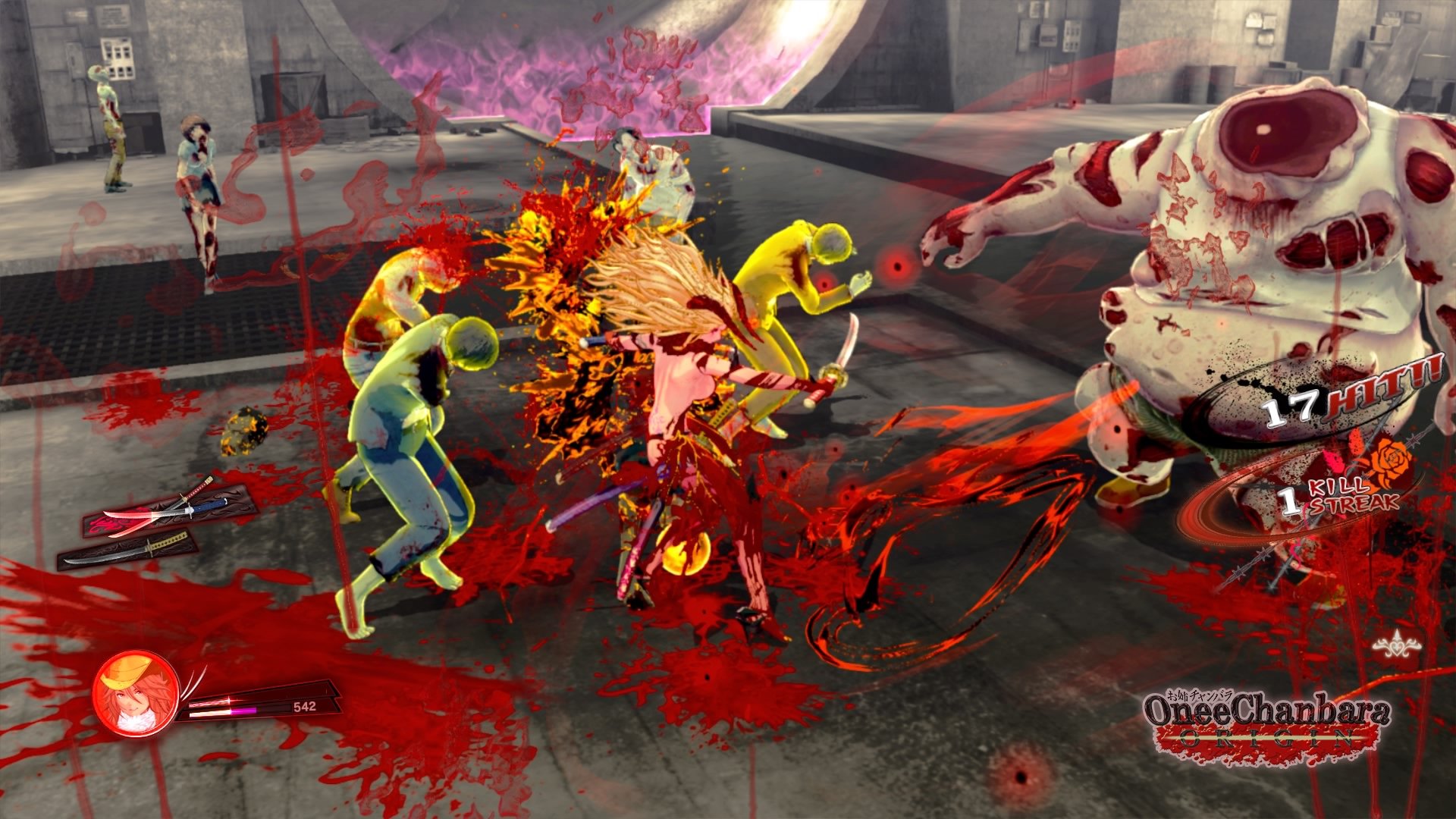 Aside from the main story – which will run the average player about five/six hours – Onee Chanbara Origin does not have much to offer. There is a selection of bonus missions, as well as a challenge tower, but little else. Die-hard fans will enjoy re-running the adventure time and again – tightening up combos and flashy counter-attacks while increasing their score grading – but for the most part, Onee Chanbara Origin is a scant package in regards to content and replay value.

The decision to retail Onee Chanbara Origin at a full $60 is mind-boggling, offering what is ultimately a six-hour-long PS2 remake at full AAA pricing. The new audio/visual elements are absolutely up to par, that’s not in any doubt, but Origin’s gameplay feels every bit of its 15 years. Nobody but franchise devotees should consider paying full price for the experience on offer – even then I’d still strongly encourage waiting for a discount.

Onee Chanbara Origin remains a cathartic, bloodthirsty, and goofy bit of chaos, whose aesthetic charms have been boosted thanks to Tamsoft’s excellent audio/visual upgrade. Unfortunately, the passage of time has somewhat dulled Origin’s gameplay, which has been far superseded by other franchises. Offering a short campaign, above-average action, and a slim package, Onee Chanbara Origin is for franchise fans only – and not at its $60 asking price.

[This review is based on a retail build of the game provided by the publisher. This review is for the PS4 edition of the game. *On Steam, some players are citing multiple issues with the PC port, which I have been unable to test myself.]