Silver Dollar Games does it again

One Finger Death Punch 2 is the sequel to everyone’s favorite two-button action romp. It’s definitely iterative of everything done in the first game, but it does come with a handful of improvements as well. If you played the original and enjoyed it, you’re going to have a damn good time.

For everyone else, let me describe it in the barest of terms: this game’s entire mantra is minimalism to the extreme. The artwork is largely comprised of stick figures, and there are only two buttons to press: left and right. Enemies will run at you from both sides, and you need to murder them as brutally and efficiently as possible. That certainly sounds like it might get boring pretty quickly, but One Finger Death Punch 2 takes this concept and manages to milk it for everything it’s worth. 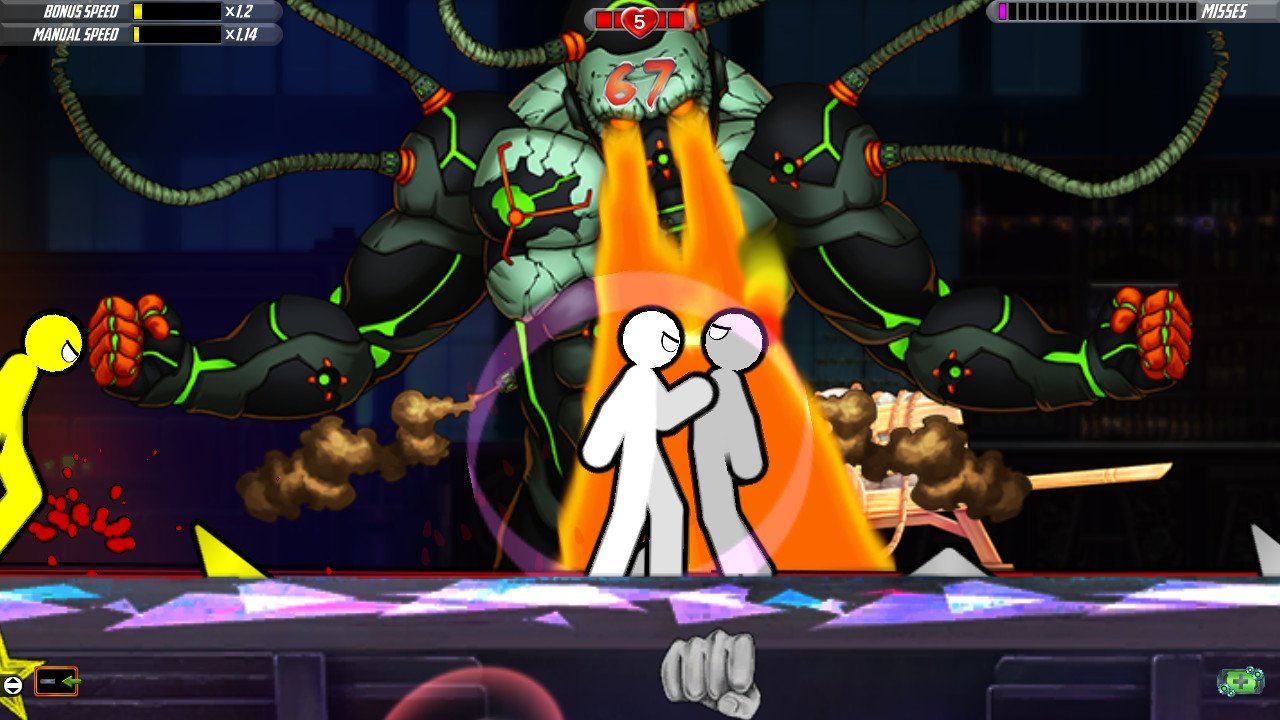 Most of your victims will be killed with one button press towards the direction that they’re coming from, but new enemy types are introduced over the course of the campaign. These vary from simple left-right-left prompts to ones vastly more complicated. Eventually, there will be enemies on the sidelines throwing objects at you as well, and you’ll need to manage your attention between impending threats.

There are also boss fights and various QTE segments weaved within the overall battles. These include everything from drop-down rhythm games to chainsaw battles, a la Nicolas Cage in the movie Mandy, where you’ll be mashing down on a button to overcome foes. These segments all take place nonstop, back-to-back, and it leads to this powerful effect of adrenaline-pumping action that is pretty much unrivaled in the 2D space of games.

On top of all of this, which is enough to carry most games, there are different modes across levels that force you out of your comfort zone. Deadly Target requires you to kill enemies that are carrying throwable weapons and then use them on foes with targets across their chest. Ghost rounds render the player character invisible, and Total Blindness turns all of the enemies invisible.

There’s a mode called Perfection where you aren’t allowed to be hit even once and another called Acceleration that has the same one-hit death rule, but also rapidly increases the speed of incoming enemies as time passes. I don’t want to give everything away, but these alternate modes can drastically impact how you approach combat, and they help keep the experience feeling fresh and fun throughout.

Once you make your way across the campaign’s world maps, you’ll also be treated to a plethora of post-game content. This stuff ranges from Survival, where you’re fending off an endless onslaught of enemies until you die, to a mode called No Luca No – which serves as a callback to one of Silver Dollar Games’ earliest releases on XBLIG from the Xbox 360 days – involving a giant cat standing in front of the screen and blocking your view. These offerings aren’t quite as substantial as the campaign proper, but they do provide some fun in chasing high scores and hoping to stake your claim on the leaderboards. 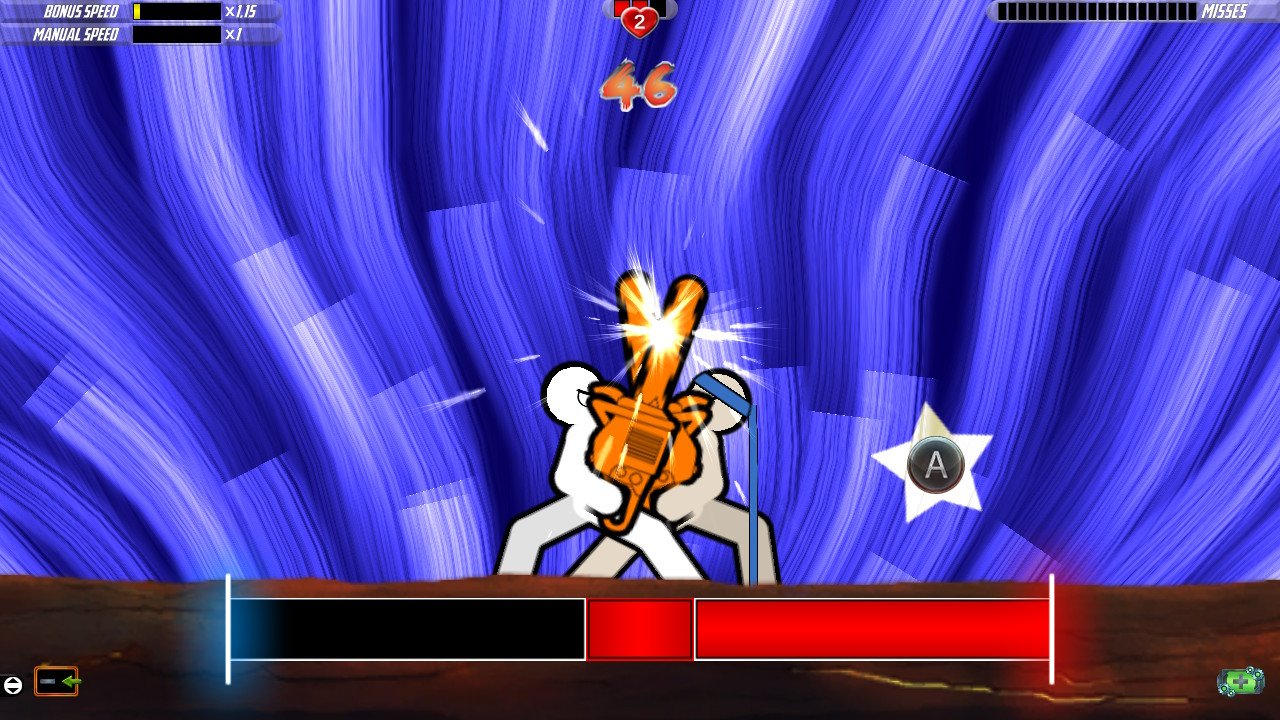 My only real complaints are that the Switch’s wireless Joy-Con aren’t fully suited to a game that relies so heavily on fast inputs and reflexes, an issue that only rears its head during a handful of particularly demanding stages, and the menus are a bit obtusely designed on the title screen. For instance, when you complete the campaign, the only way to get back to the world map to mop up any missed stages is to hop into a section called Levels, a completely separate offering of post-game stages, and then hit the left shoulder button until the map shows up. It’s hardly a deal-breaker, because it feels so damn good once you’re actually playing, but it could have been handled better.

The new coat of paint that this sequel is sporting initially turned me off a bit when I first saw it, but it’s grown on me substantially during my roughly 16-hour playthrough. The brighter colors make it easier to see what actions you need to take when split-second decision making becomes essential in later levels, and they also highlight the absurd, stick-figure ultra-violence taking place on-screen. It’s insanely cathartic when the action pauses for a few moments, you reach into your foe’s chest, rip out their heart, and then shove it in their face – sending them flying across the screen in a downpour of blood. 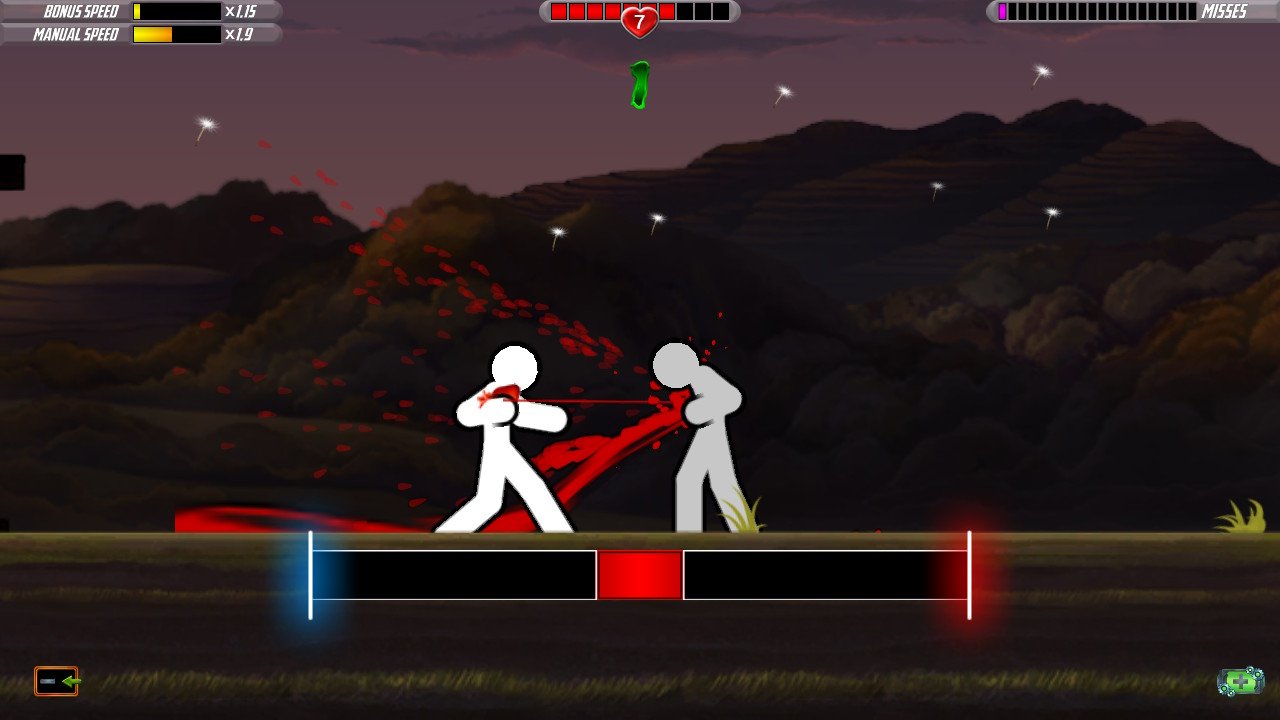 Now, you might be thinking this review is pretty damn late, and you wouldn’t be completely wrong. The sequel released on April 15, 2019 for PC, but unlike its predecessor, it included some minimum requirements that were just out of reach of my laptop’s specs. So, I was forced to wait for the incoming console ports. Luckily, the wait was worth it. Especially for the asking price of $8.99 on the Switch, this is an essential purchase for anyone even remotely curious.

Silver Dollar Games has wholeheartedly delivered on the promise of the original and managed to outdo my expectations spectacularly. One Finger Death Punch 2 is everything I love about the series turned up to 11, and it’s a fantastic example of how minimalist design can effectively carry a game, even when pared down to just two simple inputs.