I was always a fan of skateboarding games. From Skate or Die to the Tony Hawk series, and most everything in between, I’ve played and enjoyed my fair share, some more than others. And while the heyday has passed, I still occasionally break out the old titles just to see if I can still rack up the high scores and complete sick lines in a single run.

If you’re like me, OlliOlli is just the game you’ve been waiting for. 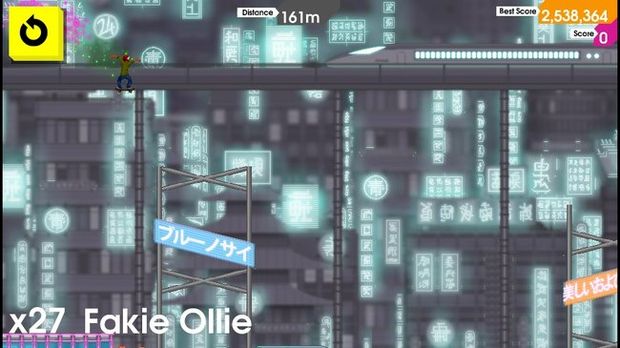 Right from the start, OlliOlli seemed like the kind of game I would enjoy. Colorful, retro-inspired sprites, energetic music, and realistic-looking tricks. I’m a simple man; I can’t skateboard in real life, but these types of games always allow me to jump and kickflip my way around a town. The first trailer for the game showcased everything I would want to do in a game like this, just in a side-scrolling 2D style.

Once I finally got to play the game, however, I instantly fell in love with how simplistic, yet punishingly difficult it could be. There’s no two ways about it: you will bail, and bail often. The game controls simply enough: hold the left analog stick in a direction (down, left, right, or up) and release to perform a trick. To land the trick, press X as soon as you land; miss it, and you run the risk of a sloppy landing, which can get you staggering and may make you miss a jump and bail quickly. Time it right and you’ll get a perfect landing, and more importantly, the maximum amount of score for your trick.

If you’re about to land on something grindable, simply press and hold the control stick in a direction while in the air to grind. If you press the direction at the moment you land, you get a perfect grind and of course, more score. From there, it’s just a bit of finessing the controls to do more tricks. There’s a guide to what moves are possible in the Tricktionary (see what they did there?), and quick flicks, or even directional rolls such a quarter circles help you execute more diverse tricks. The left and right shoulder buttons add spin which helps increase your score, and stringing tricks together in a line uninterrupted increases your multiplier.

Keeping your speed up is essential to keeping a line going from grind to grind, and getting enough of a kick-push before your first jump helps boost you along. I found whenever I was on a stretch of flat ground before a jump I was frantically tapping the X button to kick and build up speed for the next run. If there’s anything to complain about with this title, it’s that the limited control might cramp some hands as you spend most of the game flicking the left stick, while mashing the X button constantly.

The game is separated into two modes, with three difficulty levels for each: career and spots. Career is your standard mode, where you skate from one end of the level to the next. Reach the cheering crowd at the end and you unlock the next stage, 25 in all for each difficulty. Complete the five challenges for each stage and you’ll unlock the same stage in the next difficulty, from Amateur to Hard, then again to Rad. Rad mode will melt your face with difficulty, as it only allows for perfect grinds and perfect landings. Wow. While in Amateur mode, I found myself actively not continuing the the next level until I beat all five challenges for the one I was on, even though the next had been unlocked.

Some levels are set up to be completed in one long run and racking up a top score, while others will take multiple play-throughs to complete each challenge, such as specific grinds, not using kick at all, or collecting items along the path. The career mode is where you will spend most of your time honing your skills, and Spots is where you’ll try to use that knowledge for a perfect run. 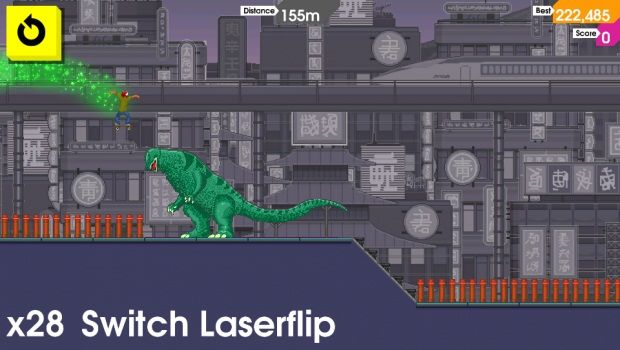 Spots are levels that are designed to be one long line. Once you start the trick, you have to keep it going until you reach the end. As soon as you’ve landed on the ground, whether you’ve made it to the end or not, that’s it. That will be your score for that level. Some levels I’ve been able to keep my line going for the duration, while others I’m lucky if I can even start a line at all. For sheer challenge, Spots is the mode that you’ll keep coming back to in the hopes of besting your score.

There’s a significant ranking system, with each level listing the top worldwide skater. Once you complete a run it will show you where you rank, and what the #1 score is. For the best way to judge ranking however, there is one new challenge a day called the Daily Grind. Here, you have only one shot to nab the highscore (where as with Spots you can redo the level multiple times). They at least allow you to practice the stage as much as you want before attempting for the ranking, but once you click “do it for real” all bets are off. You won’t be able to do the challenge again for another 24 hours.

There’s a lot to love about OlliOlli. The game is in the sweetspot of “simple to control” and “just difficult enough” to keep you playing without tearing your hair out. The Daily Grind and Spots challenges will keep the score-centric crowd happy, and Career mode will have you blistering your thumbs as you try to perfect each level. A masterpiece.