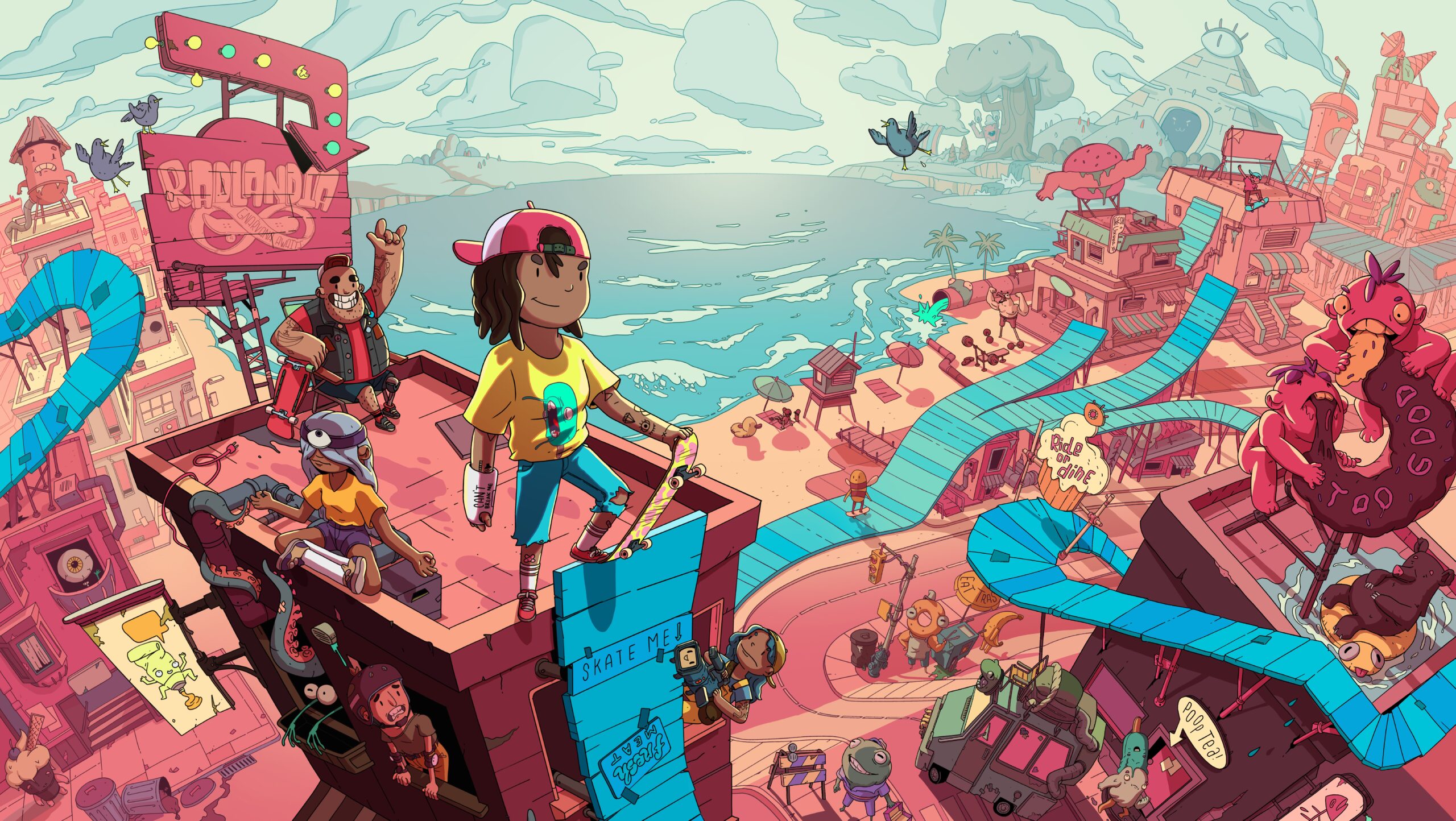 I tried multiple times to get into the OlliOlli games, and each time I bounced right off. I get that it’s a beloved series, and the straightforward interpretation of skating the perfect skateboard line appeals to me, but there’s something so clinical about the depiction. Just getting through the tutorial is exhausting. I understand that it’s a sort of easy-to-learn hard-to-master kind of deal, and that’s what makes it appealing, but a game has to get its hooks in me before I care enough to master it.

I’m guessing I’m not the only person who hit this wall, but OlliOlli World seems custom-built to address that problem. Eschewing the generic 2D designs of the previous games, OlliOlli World uses the magic of 3D to add some much-needed pizzazz. Moreover, the game has been given a better system of progression, a radical narrative, and a few extra moves under the hood. 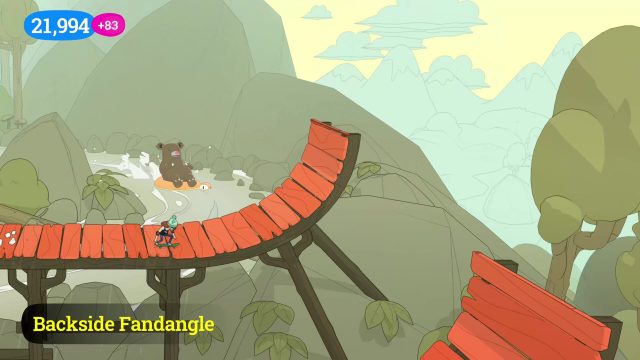 The world of Radlandia is in need of a new Skate Wizard, as their current one is retiring. The job of the Skate Wizard is to commune with the Skate Gods in Gnarvana. As someone who just began existing a moment ago, you’ve been selected by some group of people to see if you’ve got the Skate Wizardy necessary for the role.

You travel through five worlds in your quest, picking up new skills as you go, in a bid to meet all the Skate Gods and maybe hang with them.

If you’re unfamiliar, the OlliOlli games are sidescrollers that task you with getting from the left-side of the level to the right-side in the gnarliest way possible. It’s a great little system, taking the stick-based trick system from EA’s Skate series and applying it to the die-and-retry side-scroller formula. In a way, it boils skateboarding down to the barest essentials. You’re presented with a sick line, and you simply must nail it.

At the surface level, OlliOlli World overhauls the series’ aesthetic. The sterile level-select menu has been replaced with a world map, and while it’s still largely linear, side-quests have replaced the pro stages.

As previously mentioned, the game has swapped out its parallax backgrounds for a fully 3D world. This benefits it in a few ways; the worlds are easier to read, as it’s more apparent what is a grind rail and what is solid ground. OlliOlli World also looks nice, but the backgrounds are typically painted in a limited palette to reduce distractions. More importantly, though, there’s a customization system, which allows for better rewards for completing optional objectives and achieving high scores beyond big-dick points.

You’ll unlock new boards and outfits at a pretty decent rate. I generally skipped completing the goals unless there was something I actually wanted to wear, so it helped keep me progressing through the game. That’s a big improvement compared to when I’d drop it two worlds in because I had no interest in climbing the leaderboards. 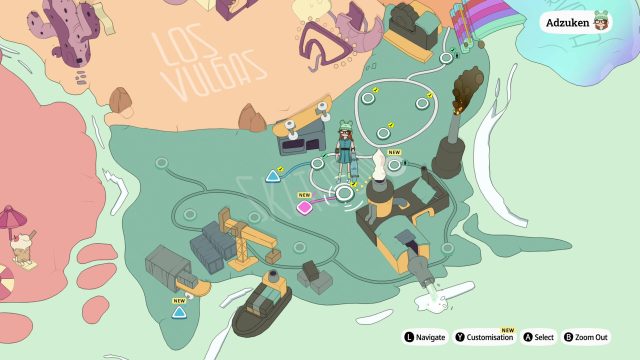 The core gameplay is pretty familiar. There’s less emphasis on nailing a landing – OlliOlli World doesn’t even give you that tutorial until the second world – which makes it feel more approachable. Likewise, checkpoints have been added to the levels, but you’re rewarded for not using them.

In terms of tricks, there are some additions. Grabs have been added, complementing the quarterpipes and branching paths. You can also tweak grinds using the right stick, and while this is limited, it is another color in your crayon box. The lack of grabs in the previous games seemed like a bit of an oversight, and OlliOlli World feels more complete because of its inclusion.

Of course, the more you learn, the more there is to get your fingers twisted up. However, each skill is provided to you gradually throughout the entire game. By the time OlliOlli World decided to give me a lesson in manuals, I was already using them and mistakenly thought that it was a duplicate tutorial. It’s all a matter of getting comfortable with the controls, bit by bit, then you can go back and shoot for the high score if that sort of thing flips your deck. 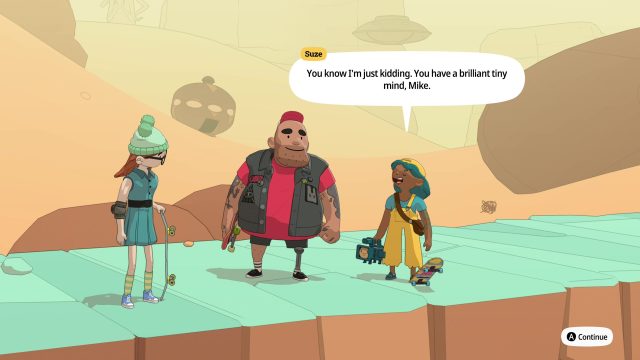 The levels themselves are a lot of fun. The later stages really feel like they push you to the edge of control, as you navigate a roller coaster of tracks. Part of the fun is learning to read the stages and react at speed. My brain often doesn’t have that sort of short-term memory, so going from grabs to manuals to grinds usually results in me eating dirt. Or worse, I accidentally press the restart button, even though it isn’t anywhere close to the pump button.

I never got frustrated with OlliOlli World, even as some of the jumps were spread out, requiring the perfect timing. Even when I attempted part of a level, like, fifty times because I need to complete an objective to get the benihana. It’s a mix of the chill soundtrack, the concentration-heavy gameplay, and the pleasant aesthetic. I found it hard to stay mad at it. It’s polished and well designed, so I always felt I only had my stupid thumbs to blame. 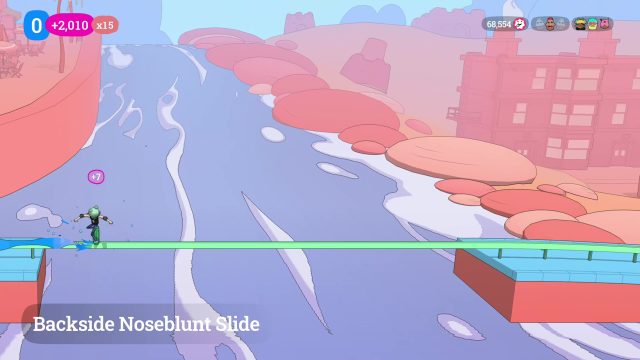 While I may have tried and failed to enjoy previous OlliOlii games, OlliOlli World really sucked me in. It feels like this should be the entry point for newcomers to the series, but I also think that it’s such a superior product that it would make going back to its predecessors more difficult.

To the end, however, I can’t say how people who have already mastered the first two games will feel about the added accessibility. From my point of view, the core OlliOlli gameplay hasn’t changed, but I never dug into the nuances before. The simplicity of the first two may be more appealing to some. Likewise, the cartoon visuals might turn some people off if they take their side-scrolling skaters seriously.

From the perspective of someone who always respected but couldn’t penetrate the series, OlliOlli World feels just perfect. I was engrossed for long periods of time and absolutely ate through the title. I’m ready to move on, rather than push for completion, but I think that’s part of the beauty. There’s something for everyone, whether or not you’ve got a competitive edge or just want to reach for Gnarvana.