Okami is a beloved cult classic, but the game failed to meet sales expectations when it was first released on the PS2 back in 2006. Capcom recently stated that they believe that the game undersold because it was released so closely to the launch of the Xbox 360/PlayStation 3/Wii.

Guess what? A new Okami game is coming out in the United States on the DS this month, in the same month that the 3DS launches in the United States. Looks like Capcom is willing to tempt fate again with an Okami release on the eve of a major console release, but this time, they have the power of puppies on their side.

Will the persuasive power of adolescent canine cuteness be enough to cause Okamiden to succeed where Okami once failed? 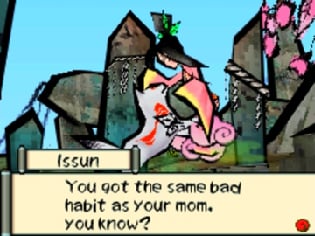 Choosing which game to put a console on is a lot like matching two breeds of dog. Breed a Dead Rising dog with the Xbox 360, and you get the original Dead Rising. Breed the same game-dog with the Wii, and you get Dead Rising: Chop Till You Drop. Though both of those games have one parent in common, anyone who has played them both will tell you that they are two very different animals. The same can be said of Okami and Okamiden. The breeding of the Okami concept with the DS hardware has resulted in a game with very different strengths and weaknesses than the PS2 original — sometimes for better, and sometimes for worse.

The game takes place less than a year after the original Okami, which technically makes it a chronological sequel, though in practice, a lot of the game is recycled from the first title. Just as in Okami, you play as a wolf who’s tasked with ridding ancient Japan of demonic impurities. This time around, though, you are Chibiterasu, a puppy with god-like powers who may or may not be the direct offspring of Amaterasu, the wolf goddess of Okami. The game features a slightly smaller replica of the overworld from Okami, but with new dungoens to explore, new (and old) people to meet, and new (and old) techniques to master. 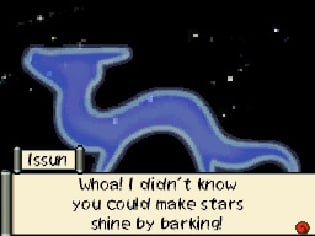 It’s these techniques, and how they are implemented, that best take advantage of the DS hardware. Like with Okami, Okamiden arms you with the “celestial brush,” a magical implement that allows you to freeze time and draw onto the game world as though it were a Japanese ink painting. The brush provides you with most of your in-game tools; it’s used for both for combat and puzzle solving.

This is the first time that the celestial brush has really felt perfect. With the PS2, it was very precise, but seemed unnatural and stiff. On the Wii, the pointer controls allowed for much more fluidity, but sacrificed the tactile connection, making the controls too loose and unwieldy for some. On the DS, it’s truly the best of both worlds. Slicing enemies in half, bringing cherry trees to full bloom, and all of the various other functions of the celestial brush have never been so tactilely gratifying to perform, yet still fluid and organic. It stands to reason that a touchscreen-enabled version of a game about drawing would be a good fit, but it’s still worth noting that Capcom has done an excellent job porting this unique concept to less powerful hardware. 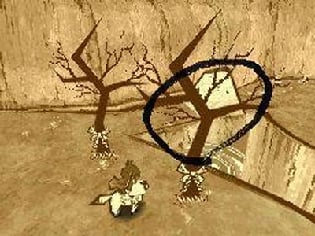 They’ve also done a great job introducing new gameplay elements to the Okami formula. Most of these new gameplay ideas come packaged with the small group of children who will work as your partners throughout the game — a team of tykes who like Chibiterasu, and may or may not be the direct offspring of characters first introduced in Okami. These children work with Chibiterasu in a manner not dissimilar to Link and Zelda’s teaming up in The Legend of Zelda: Spirit Tracks. Using the touchscreen and the D-pad, you often need to control both characters at once, which is a lot more fun and a lot less confusing that it might sound. You meet various new kids along the way, each with their own distinct abilities and storylines. The abilities of these children, and the way that their lives weave into each other, is the main thing that sets Okamiden apart from its predecessor. I don’t want to give them away, but suffice to say that there are a few twists that lead to Okamiden feeling like a very different game than Okami, at least for a little while.

Okamiden‘s storyline feels much more based on anecdotes and seemingly incidental characters. Just as Chibiterasu is not yet an epic and powerful god, his story does not seem as epic and powerful in nature — at least at first. Instead, his tale focuses more on the smaller, sweeter, more sentimental moments of the world of ancient Japan. If you weren’t expecting some saccharine stuff — or at the very least, occasional bouts of cuteness — from Okamiden, you might need to get your eyes checked. This game doesn’t star a puppy for nothing. 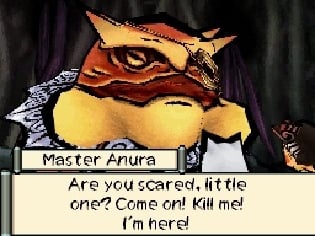 While this focus on minutiae lends itself to a more intimate, sentimental story, it also opens up the flood gates for one of the more abhorrent game design tropes out there: the fetch quest. Okami had its share of fetch quests, too, but they seem to be plentiful in Okamiden. You get to know many little incidental characters, and they each have some little incidental task to put you on. It can get a little grating, although many of them pay off in the end. The same goes for the game’s many unskippable text-based cut-scenes. They are generally pretty painful to sit through at first, but most of them end up paying off in either a laugh, a clever bit of dialog, or some form of grandeur. It all comes down to the fact that the game is consistently likable, even when it goes a little off track. With any less charm, I don’t think Okamiden could have survived all its wordy cutscenes and random collection-based tasks.

One aspect of the game that I’ll never have any affection for is the camera. It’s controlled on the touchscreen, which just doesn’t work. The only reason the game’s mix of touch and button/pad controls works is because when you activate the celestial brush, time freezes. That means you can safely take your thumbs off the buttons, grab your stylus, and start drawing. The same can’t be said of the game’s camera controls. You often need to manipulate the camera in real time during combat, which means you you have to take your hands off the buttons and touch the bottom screen with your filthy mitts. It’s a huge design flaw that really takes you out of the game. 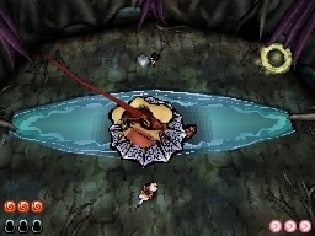 Thankfully, a fair amount of the new-style battles in the game take place from a fixed, overhead camera angle, in the style of old-school Legend of Zelda. These battles are either relegated to boss battles, or mid-dungeon, button-mashing filler, which is a shame. I actually would have preferred it if the whole game were played from a fixed camera angle. It’s better than the alternative, which is the semi-broken adjustable camera that most of the game employs.

The graphics and sound are very well done. There is a little bit of slowdown here and there, and the load times between screens feel a little long at times, but it’s all worth it to see how close Capcom came to replicating Okami on the DS. The game is undoubtedly a technical achievement, though it’s a shame that many of the actual visual ideas here are recycled from Okami. The music is also excellent, if not overly familiar. I’m not certain, but it certainly feels like most of the tracks here were taken directly from Okami. Like with the graphics, it’s hard to get really excited about how great Okamiden‘s music is when you’ve already heard it so many times before. 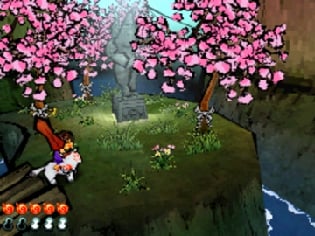 Like I said before, Okamiden exudes charm, perhaps even more so than the original. Unfortunately, charm will only get you so far. The game rarely reaches the same level of technical excellence as its predecessor, which is a shame, given that there are a few areas where Okamiden actually outdoes the original. It’s just too bad that the game doesn’t have more new content to help set itself apart from the “real” Okami. The good news is, most of the game’s shortcomings will be less noticeable to those who’ve never played an Okami game before. It’s a shame that Okamiden didn’t come first. If not for the fact that it’s standing in the shadows of one of the best games ever made, Okamiden would look a lot more brilliant. As it stands, this half-port, half-sequel does an admirable job of making the best of the DS’s hardware, but doesn’t quite have the originality or the technical polish to live up to its godly lineage.