Greener on the other side

A name can say a lot about a piece of art, with the particularly poetic ones giving you a clue as to where a project may be coming from. You can certainly get a good idea of the differences between The Unfinished Swan and Battlefield, based simply on the title.

Of Orcs and Men is one such game where a name says so much. It’s a fantasy game, that much is obvious. Its literary allusion points toward strong focus on narrative. The cultured tone of the moniker suggests a developer with something to say, something worth hearing.

For a game that uses the word “F*ck” roughly once every other line of dialog, it’s surprising just how fitting the name is. 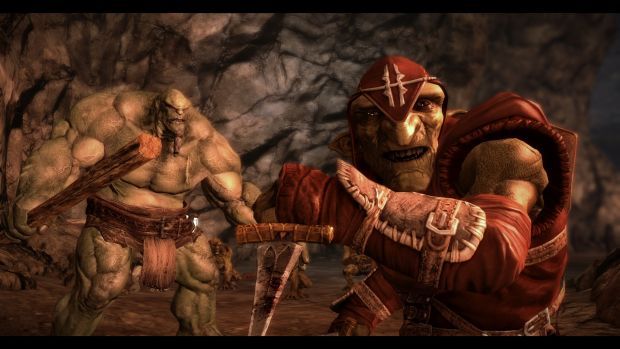 Of Orcs and Men takes the popular modern approach of telling a fantasy story from the view of “traditional” bad guys, its plot focused on a band of Orcs seeking revenge against a tyrannical human empire. With greenskins persecuted and enslaved, it falls to an extremely violent Orc warrior named Arkail and his Goblin companion, Styx, to assassinate the emperor in a bid to free the greenskin people.

As already noted, Of Orcs is not shy of adult language, to the point where one feels it might be trying just a little too hard to be edgy. However, the constant swearing certainly fits the tone, especially given the fact that our heroes are not necessarily heroic, blinking no eyes at slaughter, torture, and other nefarious deeds. It also helps that, despite being morally dubious, racist, untrustworthy and violent, our two protagonists are relatable and hard to dislike. Styx, in particular, is a wonderfully realized character, his sarcasm, selfishness, and deeply buried sense of nobility making him both likable and frequently hilarious. The sneaky Goblin has a few wisecracks that legitimately made me laugh out loud — no small feat for a videogame.

Though the 10-14-hour story isn’t quite as deep as it’d like to be, and the constant treachery of other characters can grow a little exhausting, Of Orcs and Men still manages to provide one of the better role-playing adventure stories I’ve experienced in a while. With its dark world and characters that seem very human despite their fantastical genus, there should be few people who won’t feel satisfied by the plot, as it grows from a story of foolhardy revenge to inspiring rebellion.

Combat has a heavy BioWare influence to it, with Arkail and Styx making used of queued commands to take out the opposition. As one might expect, the Orc is a savage warrior who can take and dish out a beating, while his Goblin partner is all about debuffing the opposition and providing ranged support. Both characters have one of three combat stances — melee, special, and defense/ranged, depending on the character. Each stance has its own particular set of skills that can be queued up by slowing down the action and choosing up to four desired attacks, which will be performed in sequence once time has been returned to normal.

Arkail and Styx can be manually controlled at the press of a button, and it’s worth approaching combat with the idea that you will be using both of them. Unchecked, the A.I. isn’t particularly good at handling battle situations, even when switched to the suggested defensive stance. Fighting is all about constantly maintaining both characters, keeping them both focused on the right tactics and ensuring they work together to take down foes. You don’t play Of Orcs as a single character — you really are both of them. 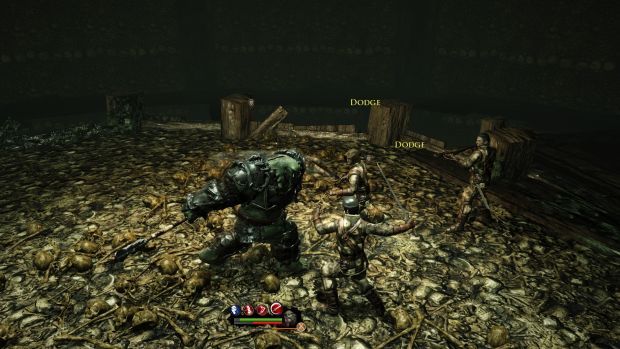 When the greenskins level up, they gain access to new skills, as well as opportunities to enhance their existing ones. Skills can only be enhanced once, and the player has to pick one of two enhancement options, usually adding extra damage or a new status ailment. Some skills are designed to help Arkail and Styx support each other or attack together — for instance, Styx’s normal attacks can be made to cause bleeding, and Arkail’s can be upgraded to deal extra damage to enemies affected by that particular status.

As well as keeping the protagonists performing the right tasks, players must also watch out for Arkail’s biggest weakness — his rage. As Arkail performs attacks, a rage meter fills, which, once fully powered, will initiate a berzerk status. Under the influence of berzerk, Arkail gains a large damage boost at the cost of being uncontrollable and even prone to attacking Styx. This can be disastrous if it activates too early in a battle, as his unpredictable nature and inability to revive his partner leaves both he and Styx vulnerable. Exploited carefully, however, it can also be a way to successfully clear a battle early. 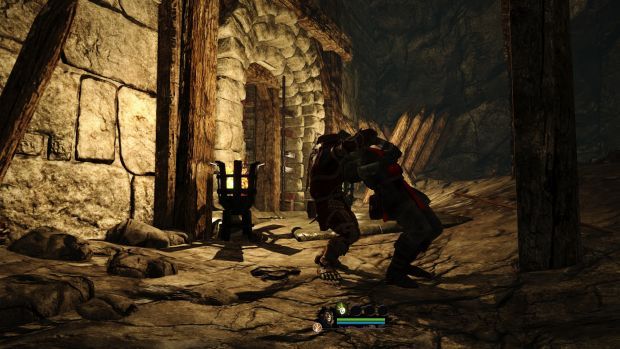 It’s worth noting that, for at least the first half the game, things are brutally unforgiving. As often seems to be the case with RPGs out of Europe, players are thrown into the deep end and come up against unwavering, hard-hitting opponents almost immediately. As characters level and gain new powers, the challenge eases up considerably, but it’s a rough start that risks putting players off before the action’s even truly started. It doesn’t help that healing is almost worthless, leaving the character vulnerable to attacks that often sap more health than is being gained.

Many fights, however, are unbalanced by design, for Styx has a way of evening the odds. The Goblin can sneak among foes before the fight’s started, entering a special stealth stance that renders him invisible to NPCs unless he stands literally a few inches in front of them. In stealth mode, Styx can assassinate guards, thinning the ranks before they’re taken on in full combat. It’s not exactly “stealth” gameplay, however, since there’s no real need to hide and most enemies are stood in place. These sections are more like puzzles, as players scope out the environment, check where guards are looking, and work out the optimal number of guards that can be killed without being seen or sniffed out by dogs. In most situations, not every guard will be killed, but even getting to cut down a couple before having Arkail rush in can mean the difference between victory and defeat.

Sometimes things are rendered more difficult than they ought to be simply because the game isn’t working properly. At times, certain commands won’t activate when demanded, or the characters will change their attack targets for no reason. Trusting the A.I. to do anything is a bad idea, as it likes to go for opponents who are too far away or provide the least threat. There are undoubtedly some bugs in the works, occasionally popping up to make controls less responsive, and sometimes cause one of the heroes to not attack at all for an arbitrary amount of time. 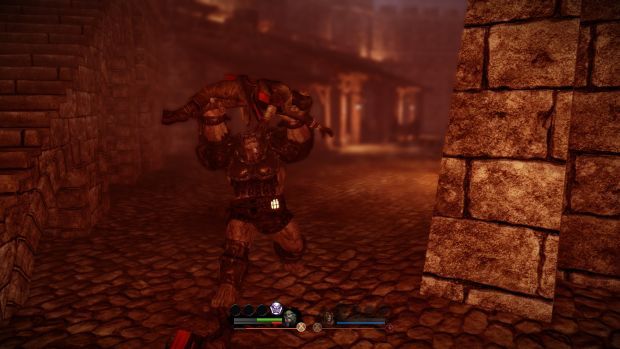 Of Orcs and Men is rough around the edges, though it’s by far one of the more polished European RPGs I’ve seen. Bugs aside, the combat is intuitive and a lot of fun to play with, and the game looks fairly pretty, outside of many solid objects passing through each other. There’s also a rather unique shop system, with coins eschewed for trade points. Equipment is bartered for rather than paid for with gold, and these trade points can be saved to upgrade gear. That said, there’s not a lot of loot on offer — there aren’t too many weapons and only a handful of armor pieces in the game, so don’t go out expecting to be swathed in lavish finery the moment you start swinging your axe.

One of the real highlights of the game has to be its soundtrack. An incredibly beautiful arrangement of tunes has been provided by the Boston Cello Quartet and composer Olivier Deriviere. There is a lot of memorable and melodic music, adding real gravitas to cutscenes and important fights, the type that truly enhances and complements the visual action. Indeed, this is one of the best soundtracks I’ve had the pleasure of hearing this generation. 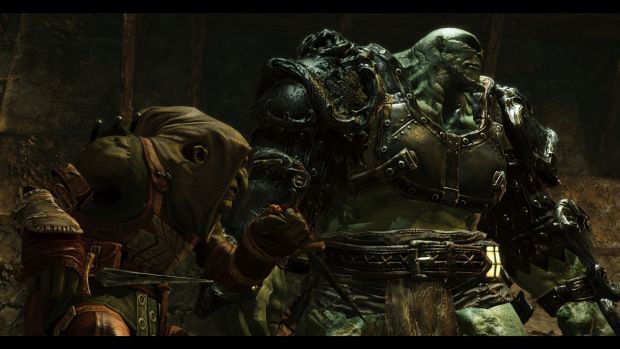 Of Orcs and Men is for a specific audience — its quirks and faults will be tough to forgive for the mainstream crowd, while its challenge and uniquely hectic combat can be offputting. It is, however, a game that a particular sort of gamer will fall deeply in love with. At times beautiful, hilarious, and even occasionally thoughtful, this is a one-of-a-kind action-RPG that deserves your consideration, if not your monetary vote. There’s certainly nothing quite like it, and for all its foibles, when it hits its mark, it does so with vigor.

A name can say a lot about a project. Of Orcs and Men is a rare and tantalizing, if perhaps a little ponderous, appellation. The same can indeed be said of that which bears its title.