You did not reach the Nuclear Throne

Nuclear Throne is not a game for people who get frustrated easily.

My first few hours spent with this top-down shooter from Super Crate Box and Ridiculous Fishing developer Vlambeer didn’t go well. I struggled with aiming and, as a result, ammo conservation. I had a hard time predicting patterns well enough to evade attacks. Levels felt overloaded with danger, almost as if an algorithm forgot it was generating levels for humans, not infallible beings. And, most irritating of all, I kept ending promising runs with a single tragic slip-up that stole all my health. (Usually an explosion.)

As much as I enjoyed the general idea of Nuclear Throne, early on, it just wasn’t clicking. 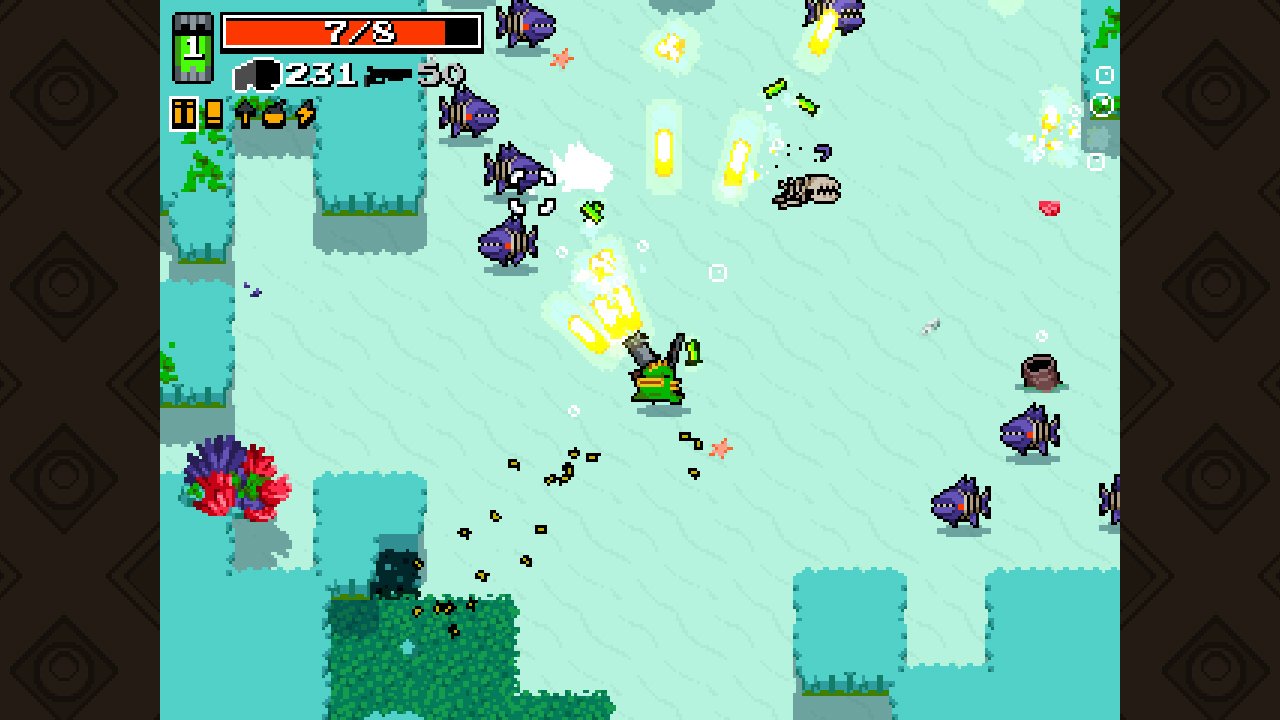 This is a roguelike, and a brutally difficult, bullet hellish one at that. These games have an uncanny ability to push us to the brink of madness only to win us over, in the end, and form an unbreakable bond. I’m no stranger to that process. But with Nuclear Throne, it’s far more of a love-hate relationship than I’m used to.

A large part of what kept me going despite repeated, soul-crushing failure was the look and sound of the setting and the strange creatures who inhabit it. The overall vision here is superb, with mutants, monsters, robots, and even an inter-dimensional police force collectively forming a believable, lived-in world. You never develop a full picture of this post-apocalyptic wasteland, or what its future might hold, and that’s a good thing. Vlambeer provides just enough hints to stoke imaginations without oversharing.

As a mutant, your basic goal is to kill everything. And I do mean everything — that’s how you progress to the next level and, with persistence, reach the titular Nuclear Throne. Initially, you will fend off bandits, maggots, and scorpions in a desert area. They’re all good fodder for learning the basics before the real scary stuff comes out. Depending on your character, your adventure starts with a basic revolver, but you will soon find more interesting guns with varying rates of fire, bullet spreads, and other quirks.

It’s a shame you can only hold two weapons at a time, because I never wanted to part with anything. They’re all delightful to use, and once you’ve grown accustomed to the way combat flows, it’s so gratifying. But ammo is finite and the maximum amount you can store of each type (bullets, shells, bolts, explosives, and energy) isn’t very high. That’s by design. You’re meant to continually cycle weapons in and out to match the situation at hand as well as what’s left in your ammo stockpile. It’s a clever way to encourage adaptability and it also helps the game maintain a sense of excitement over hundreds if not thousands of runs.

There are also melee weapons, which are just as enjoyable as guns if not more so. They can be supremely useful in the right situation. Most of them can reflect projectiles back at enemies and, with sufficient reach, even attack through certain walls. There is a major downside to getting up close and personal, though: more than a few enemies explode when they die, and some bosses will even try to bring you down with them. They’ll probably succeed, too.

Rads (experience points) are the other major piece of Nuclear Throne. They’re a type of collectible dropped by slain enemies, and you need to be quick to nab them because they fade after several seconds. Once you’ve earned enough rads to level up your character, you’ll be able to choose a mutation (perk). These grant powerful passive abilities like health or ammo regeneration, slower-moving enemy bullets, and better melee range. But you don’t get to pick a mutation until you have successfully obliterated everything and exited the level, and they’re presented in a random group of four. Depending on your character’s specific strengths and weaknesses, or your personal playstyle, you may not like the choices available.

Ammo and health pick-ups also expire shortly after dropping onto the field, which means even if you have carved out a secluded spot that enemies won’t wander into, you can’t afford to stay put. Nuclear Throne is adept at making you feel unsafe. You’re utterly fragile in this game, with or without full health. Everyone and everything packs a tremendous punch, so one wrong move can be the end. Only a select few elements like unlockable characters are persistent across runs. 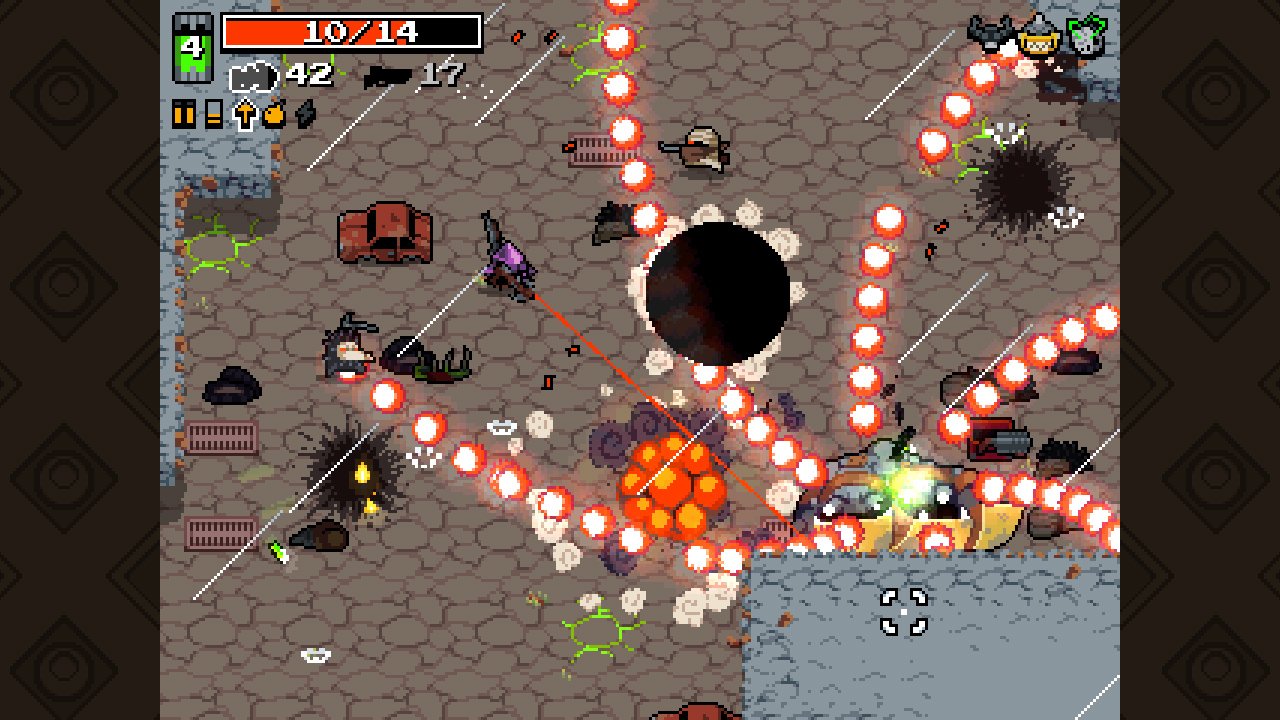 Levels are procedurally generated with variable layouts and enemy placements, but there are consistent themes (desert, sewer, caves, lab, etc.) on the path to the Nuclear Throne. Unless you skip around by entering secret areas — the underwater oasis is a personal favorite of mine — the overall structure will be the same on every run. Bosses show up on specific levels, so when you get to level 5-3, you know Lil’ Hunter is going to drop in and ruin your day. He’s the fucking worst.

With practice, you can heighten your skills and know how best to leverage a character’s special abilities. You’ll be able to rapidly scan and prioritize threats. You’ll generally know what lies ahead and which weapons to hold onto. But that’s not always enough. Sometimes, Nuclear Throne will just screw you over. And that’s where it falls short. There will be times when you spawn into a level surrounded by enemies and explosive objects and immediately die. Sometimes, it’s that exact scenario plus a boss in the mix. It can be unfair. Or, at the very least, uneven. I expect that in roguelikes to a certain extent, but it especially stands out as a problem here.

Bad spawns aside, there is a weird jump in difficulty in the Frozen City. Every time I managed to clear that particular zone, I went on to beat the next few levels without much trouble and made it to the Nuclear Throne (the point at which you can fight a boss and end your run, or “loop” it). The first time I fought the boss, ten hours in, I brushed up against the thing, causing a game-ending error. It was another two hours before I got another chance and succeeded. I haven’t been able to make it back yet to try looping (think new game plus), so I know I’m missing out on some weapons and bosses, and an even greater challenge. 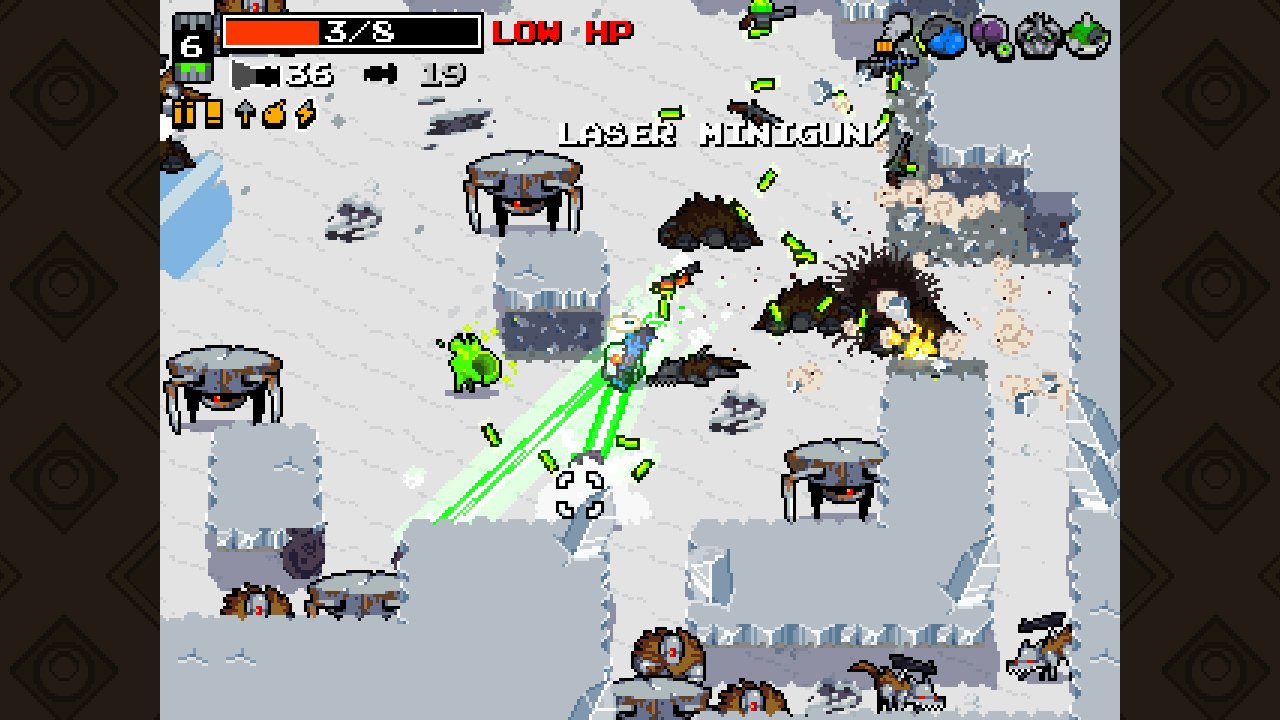 If I could do it all over again, I would probably opt for the PC version instead. Mouse and keyboard controls would have been a godsend while I was learning the ropes. On PlayStation 4, there is an aim assist option, thankfully, and you can remap the controls. I suggest playing around with those settings and switching the “change weapon” button to something other than triangle. For folks interested in playing local co-op with a friend, know that the brutal difficulty persists. It’s set up in such a way that if one player dies, they need to quickly be revived, and both players lose part of their health. So it’s not really any easier.

In the end, I have come to love and loathe Nuclear Throne. It’s one of the hardest, most rewarding games I’ve ever played. But as satisfying as it can eventually become, I think it is far too demanding for its own good. With additional polish and balancing, this could be a masterpiece in the genre. It’s not quite there yet, but it’s close.