You really have to give it to Q-Games. With the notable exception of PixelJunk Shooter 2, it has tried something different with pretty much all of its releases, from slot car races, to tower defense, to music visualizers.

Not every game is a smash hit, but they all have something unique to offer, including the newly minted Nom Nom Galaxy. 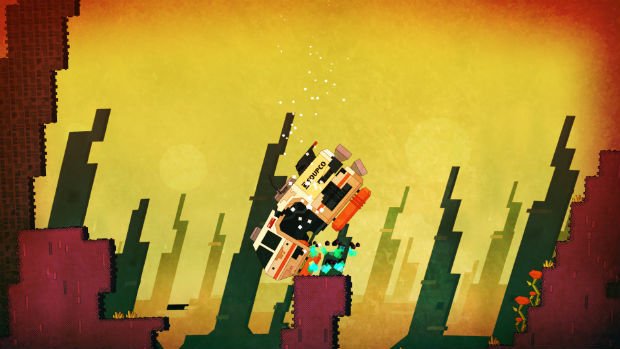 Nom Nom takes on the concept of capitalism head-on, with one major resource sought after across the galaxy: soup. You fill the shoes of an Astroworker on behalf of Soupco, a company hellbent on dominating the universe with market share. So hellbent, in fact, that you’ll sabotage enemy competitors, and defend your base from deadly onslaughts. So a lot like real life. Jolly capitalism! It’s a silly plot, but it sufficiently motivates you for the events that unfold over the course of the story.

As for the gameplay, think Terraria. It’s a platformer at its core, but it also features a hefty amount of exploration on uncharted planets, seeking out resources, building new structures, and battling the hostile inhabitants within. To survive you’ll have to covet pockets of air and utilize weapons like a buzzsaw to chop up foes. The Astroworker also has a number of tricks up its sleeve, like the power to build ladders, and so on.

It’s pretty open-ended, even in story missions that have succinct objectives. Your ultimate goal in most cases is to build soup machines, gather ingredients, craft the soup, and then ship it out on soup rockets to the rest of the galaxy. A part of the HUD in the top-right corner is dedicated to tracking to your competitors, who are also working “behind the scenes” to ship out more soup than you. It all meshes with the story, and although it gives the proceedings a sense of urgency, it never evokes feelings of dread.

Building out a base is often times an enjoyable experience, as you can design elevators to get around easier, and turrets to defend your base at specific chokepoints. Think of the latter strategy like defending the WWE Championship Belt — sure, you’re at the top, but now you need to keep it that way. It’s definitely fresh and rewarding the first few times you do it, but by the 10th or so invasion, it starts to lose its luster.

Exploration is often filled with new experiences, including boss fights, but base defense is usually a static affair. This is especially true in sandbox mode, where mission parameters cannot be met, bringing about an end to the cycle of repetition. In addition to the campaign there’s also multiplayer on any given map, though I haven’t had much success with getting it to work a week after launch on the PS4. Whether this is a result of poor netcode or a lack of community is up in the air, but suffice to say that you likely won’t be enjoying this feature that often.

There’s also a selection of weekly challenges, from straight-up races to combat challenges. Races can feature gadgets like pogo sticks, and are actually pretty fun to play when you’re not wrestling with the jumping physics. It’s one thing to have weak jumps in an easy-going open world format — another in a pinpoint-precision challenge. Since they feature online leaderboards and two-player co-op (four online if you can muster them up), they serve as a nice distraction. 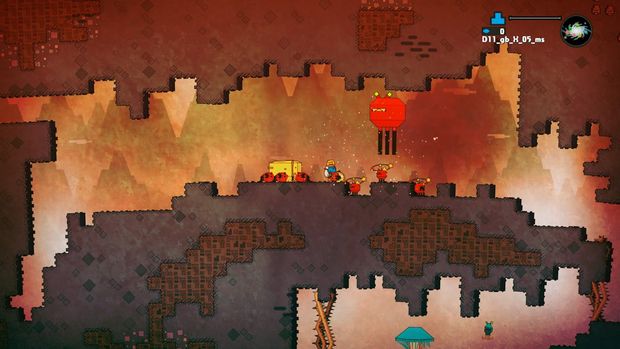 Nom Nom Galaxy isn’t particularly exciting, but it’s a whimsical little journey that does a decent job at world building. Despite the fact that people are probably clamoring for “more PixelJunk Monsters” as we speak, I’m glad that Q-Games continues to try new things.