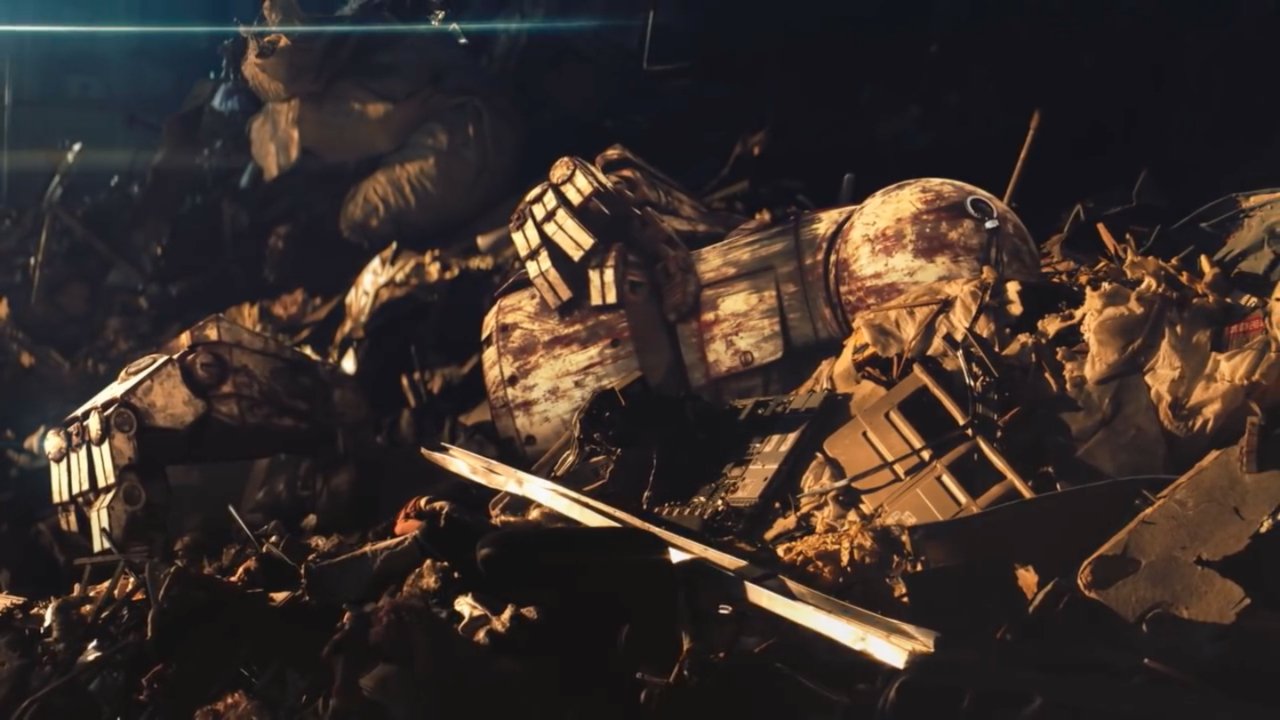 Anyone who has spoken with me in the past couple of months would know of my absolute adoration for NieR: Automata. In fact, it’s very likely that I’ve become unhealthily obsessed with it. To say that I regard it to be one of the better games in this current console generation would be an understatement, and I find myself utterly enamoured with its story, characters, world and its dark and often tragic themes.

Naturally, when I first heard about its now-released 3C3C1D119440927 DLC, I couldn’t help but find myself excited about it. Sure, it was advertised as an arena mode with an optional boss and a couple of costumes inspired by the previous NieR, but it was an expansion to a game that I hold in high regard, as well as a decent excuse to replay it.

Now that I’ve gone and replayed through the full game yet again, and now that I’ve had a chance to run through the DLC, do I think that it was worth my time and money? Well, yes. But there are a few small caveats. 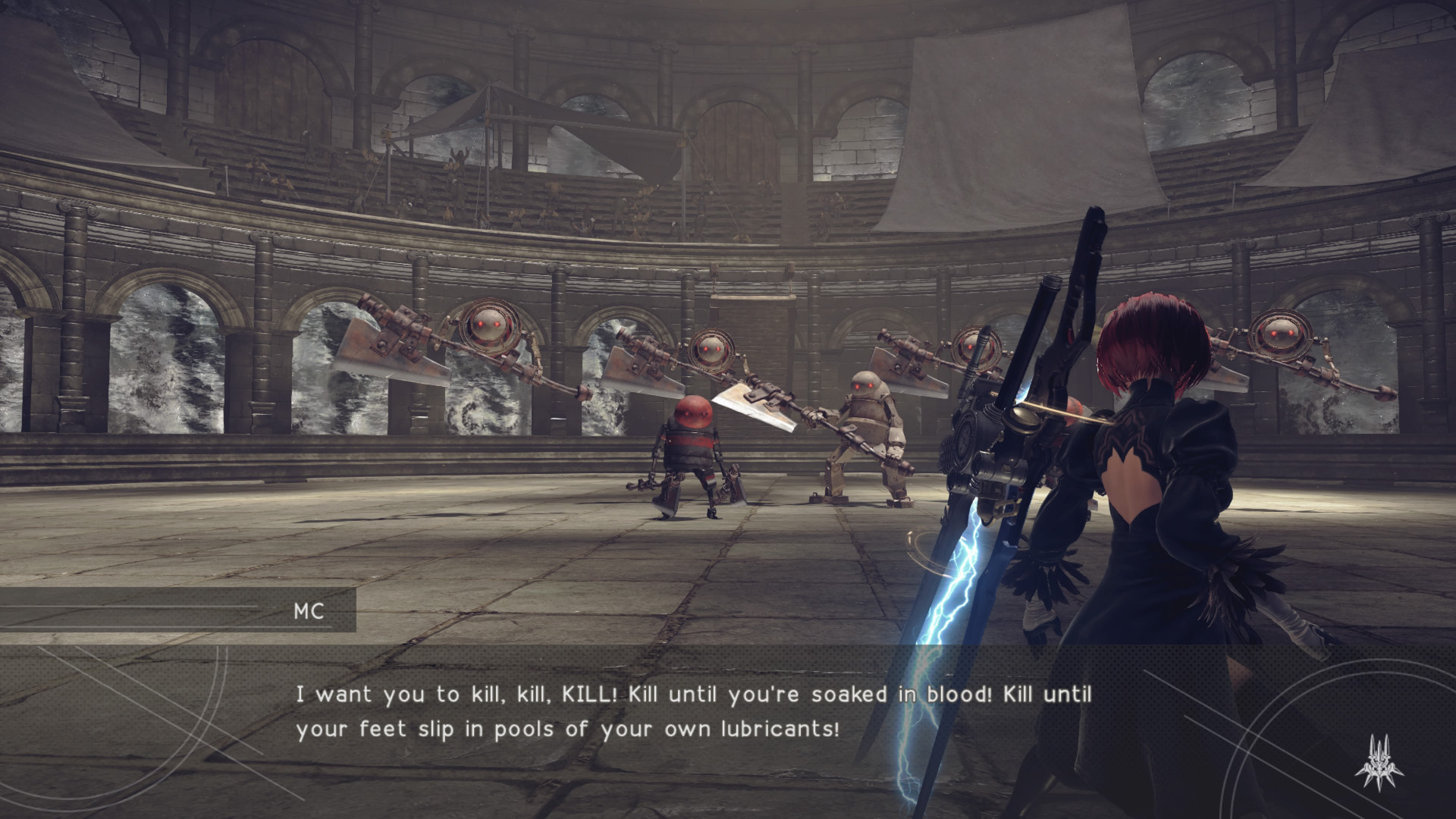 So, what does NieR: Automata’s 3C3C1D119440927 DLC contain? Well, for the most part, this is an arena mode that offers players three separate locales to battle in. Each of these colosseums offer cosmetic rewards, such as outfits inspired by the previous NieR title, items that can change the appearances of enemy projectiles, and hair dyes for both 2B and A2. To go with this, there’s a short-but-interesting story sequence, and a boss fight that comes across as if the phrase “boss fight” was being interpreted by Drax the Destroyer.

Considering the price, this doesn’t sound like much. In fact, you can see the DLC draw to a close within about two hours. Despite its length, I can’t help but find myself impressed with what PlatinumGames managed to fit into such a meagre amount of content.

For starters, no two colosseums are alike. Each of the three arenas on offer have something to differentiate themselves from one another in terms of gameplay. For instance, the arena in the Desert tasks the player with a series of trials that impose some form of a hindrance upon them to better test their skills, whereas the one in the Flooded City simply presents a set of increasingly-difficult gladiatorial combat challenges. Then there’s the arena in the Forest Zone, which forces the player to engage in combat as one of the game’s diminutive robot enemies.

The result of this is that each of the DLC’s arenas felt distinct from one another, and with a healthy amount of variety in terms of gameplay. The downside is that, since these arenas only have seven challenges (one of which being entirely optional) each, I can’t help but shake the feeling that there could have been more in terms of actual content. Because of this limitation, it feels as if the developers never get the chance to refine and expand upon some of the more interesting challenges, such as the one in the Desert arena that forces the player to fight on a series of small and precarious platforms.

My other problem is with the Forest Zone’s arena. As I’ve already mentioned, it forces the player to fight as one of the game’s robot enemies. This isn’t necessarily a bad idea in theory, but by the time I’d completed the last of its challenges, I was finding myself desperately missing the far more varied and interesting play styles of the game’s main characters. At the very least, there is a reasonably sizeable selection of machines to play as during these challenges, but they all have some significant restrictions that simply make them less fun to play as than 2B, A2 or 9S.

To give credit where it’s due, it is still a highly effective means of deconstructing the standard arena mode, as I felt truly underpowered when in the shoes of one of the game’s robotic enemies. This did an effective job of highlighting the cruelty of the other two arenas, due to it genuinely coming across as if I was playing as something that could never stand a chance against one of the game’s main characters. However, from a gameplay perspective, it simply isn’t as fun as the other two colosseums. 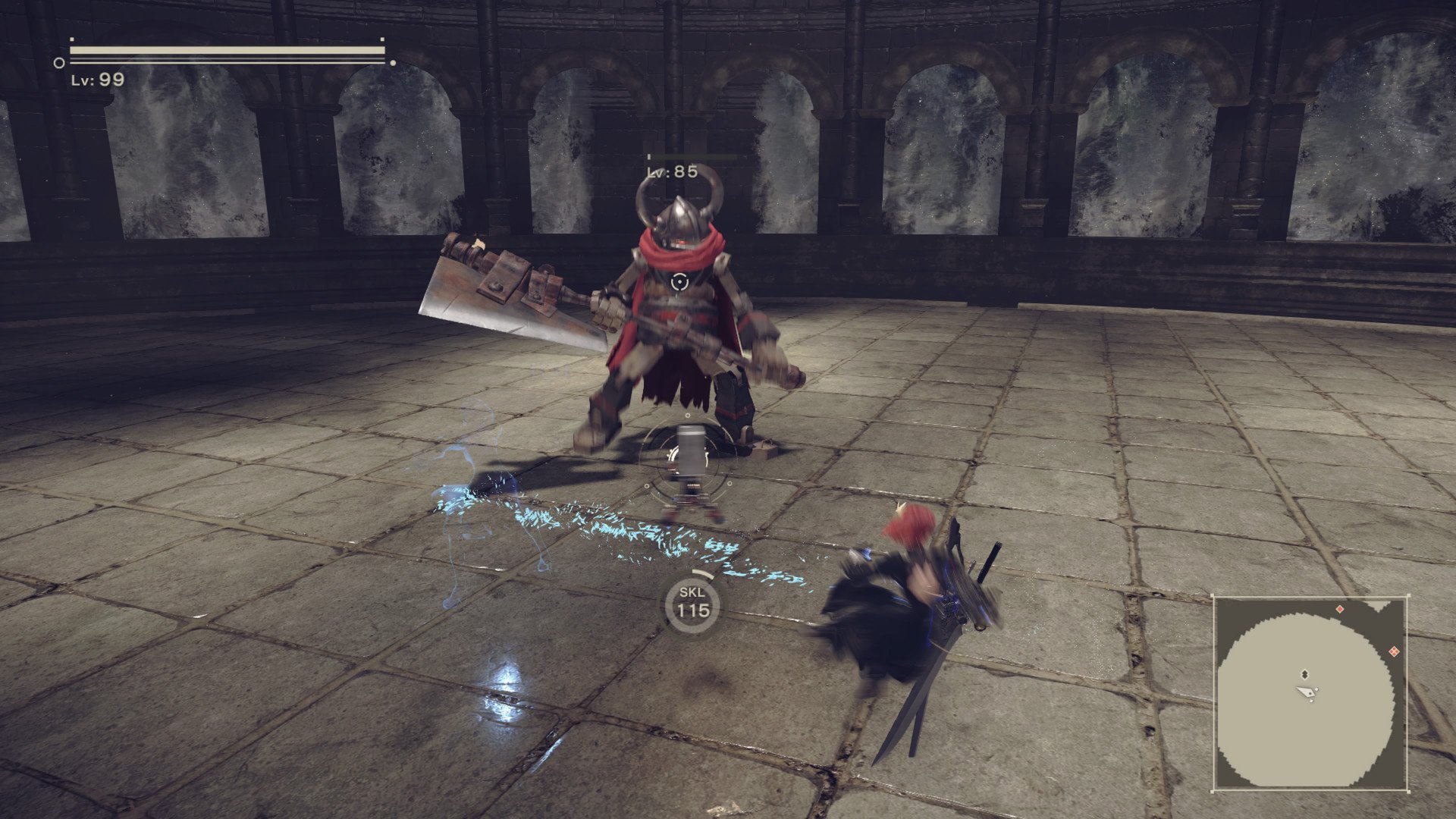 Going into the DLC, I was surprised to see just how lore-heavy it is. While my time in each of the colosseums was short, it did allow for a fascinating glimpse into the societal values of the androids or machines that reside within the game’s locales. Notably, the Flooded City’s arena gave me a somewhat disturbing view of the sheer barbarism of some of the members of the android Resistance that players find themselves fighting for on several occasions throughout the game’s main story.

NieR: Automata is a game that, throughout its story, will often go to great lengths to put an emphasis on the concepts of individuality and personality. It frequently demonstrates to the player that the machines, which in any other action game would simply be mindless automatons designed solely for destruction, are capable of attaining sentience. In this light, the idea of constructing arenas built around their annihilation could be seen as somewhat of an atrocity. Throughout its runtime, it becomes evident that this thought wasn’t at all lost on the developers of the 3C3C1D119440927 DLC.

Despite the primary focus of the DLC being on the arenas and their rewards, at its core, this is still the same NieR: Automata that managed to draw me in with its heartbreaking and often-confronting narrative, themes and world. In this respect, 3C3C1D119440927 does an admirable job of fitting in with the general feel conveyed by the rest of the game. 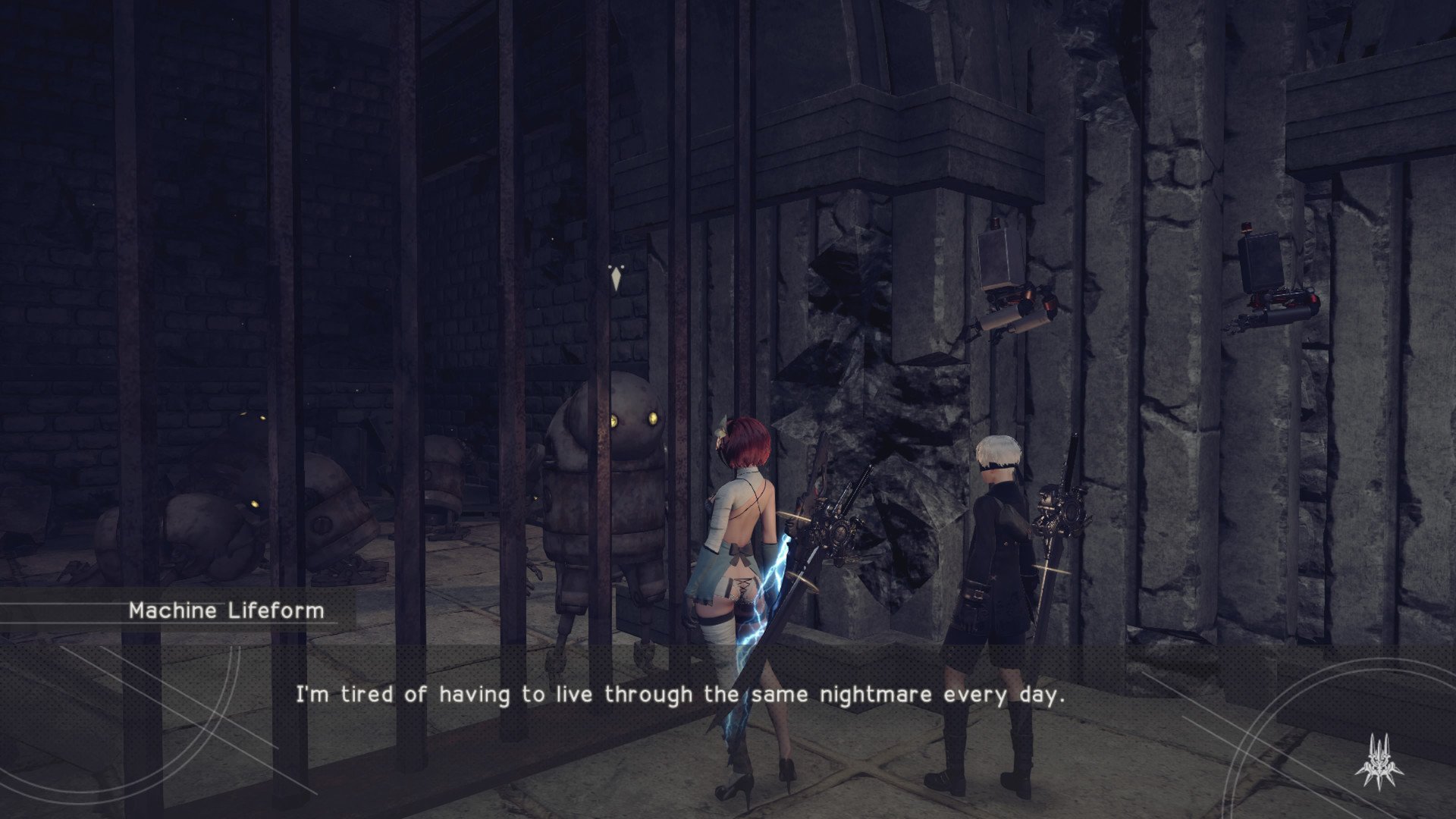 Not long after entering the first of the three arenas, it became evident to me that 3C3C1D119440927 asks a fair bit from the player. This is due to the fact that a large portion of the arena challenges in the DLC require a high-levelled character. In fact, the more significant rewards — including the outfits based on Kainé and the older version of Nier’s designs — are gated behind fight sequences that require the player to be around level 80. Unless you’re willing to level up your character past the point in which you’ll likely be completing its main story at, you shouldn’t go into the DLC expecting to see everything that it has to offer. In fact, I’d argue that you’d miss out on its strongest and most memorable aspects, such as a short-but-tragic story sequence that can be accessed after completing all three arenas (sans optional challenges), and the hidden boss fight.

Admittedly, there are some easy ways to level up your character quite quickly, but it still requires that added bit of player investment.

I must also talk about the price. The cost of admission for NieR: Automata’s DLC is $14, which is only $1 less than some particularly lengthy and utterly phenomenal content packs such as Dark Souls’ Artorias of the Abyss. For comparison, 3C3C1D119440927 can easily be completed within about 2 hours. While I will say that the DLC pack is enjoyable for what it is, it’s arguable that its pricing may be at the upper end of what is acceptable. The developers may have put a respectable amount of effort in ensuring that it does offer fair bit of story and lore content, but it is still an arena mode at heart.

I’m not going to begrudge the developers for building a piece of DLC that’s heavily tailored for high-level play. In fact, I’m quite glad that it is as it is, as, aside from a secret boss or two, there really wasn’t all that much high-level content in the base game. The downside to this strategy is, of course, that it makes the DLC a tough sell to anyone who hasn’t progressed that far, or to someone who enjoys the game on a far more casual level. For as much as I enjoyed my time with 3C3C1D119440927, this is definitely one for the more ardent of NieR fanatics.