New Super Mario Bros. 2 was a good game, but I couldn’t help feeling disappointed with it. The first New Super Mario Bros. felt like a breath of fresh air, a welcome return to the past in an age where such simplicity had been forgotten. The right bit of nostalgia at the right time can feel incredibly new.

The sequel was not that. Already following New Super Mario Bros. Wii and Super Mario 3D Land, it didn’t feel old-school as much as it felt plain old. Still good, but wholly unambitious.

With the advent of New Super Mario Bros. U, I now know why it lacked adventure and inspiration. Nintendo had clearly already spent itself working on this little bit of greatness. 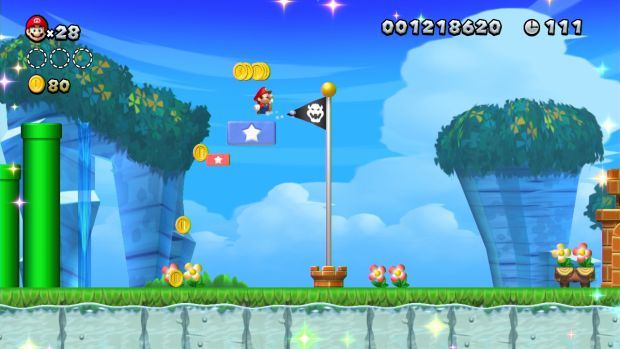 New Super Mario Bros. U is, as you might expect, yet another sidescrolling romp through a variety of platform levels spread out across a colorful map of eclectic themed worlds. As usual, Princess Peach has gotten herself kidnapped by the forces of Bowser, and Mario must come to her aid. You know the deal by now. We joke about how much she gets kidnapped, but it’s honestly gotten past the laughing point. Sort it out, Mushroom Kingdom. Sort it out.

This latest chapter in the Mario story doesn’t go out of its way to contrive surface-level innovations like NSMB2 did, instead focusing on the kind of purity that made the series so appealing, while making sure to throw in just enough new toys to validate its existence. Chief among the fresh trinkets is the acorn power-up that transforms Mario into Flying Squirrel Mario, able to not only glide but gain a huge boost jump with a button press or shake of the GamePad. It’s a subtle addition that blends features of old power-ups with a few unique twists, which sums up the game overall quite adequately.

Also joining the adventure are Baby Yoshis that can be carried for new powers. Unlocked in the world map, these plump curiosities follow the player through courses and are color coded according to their unique abilities. Pink Yoshis are inflated to gain high altitudes, Blue Yoshis spit bubbles that trap enemies and can be jumped on to cross gaps, while Yellow Yoshis generate light and radiate a large circular glow in order to push Boos back a little and give Mario some breathing room. Baby Yoshis will also eat any monster they come into contact with, and, more importantly, sing backing vocals to any course’s music once held — which is ludicrously adorable and brilliant for all the right reasons.

Crucially, NSMBU‘s level design is where it really stands strong. Intricately set out and featuring some really clever environments that play with conventional platform design, this Wii U launch title not only brings inspiration back to the series but challenge as well. Far more than in recent Mario games, quick reflexes and a solid knowledge of Mario’s abilities are required to get through each course intact, not to mention discover the many hidden paths scattered throughout almost every environment.

From spooky forests to deadly mountains and even a course rendered with a lovely watercolor aesthetic, the variety and vibrancy is something more recent releases have sorely lacked. Multiple paths, allowing players to choose which world to visit, as well as courses, add to the feeling of discovery that has returned with welcome aplomb. Those looking to be challenged and surprised while still enjoying all the familiarity of the New Super Mario Bros. series will be more than satisfied with what Nintendo has to offer here. 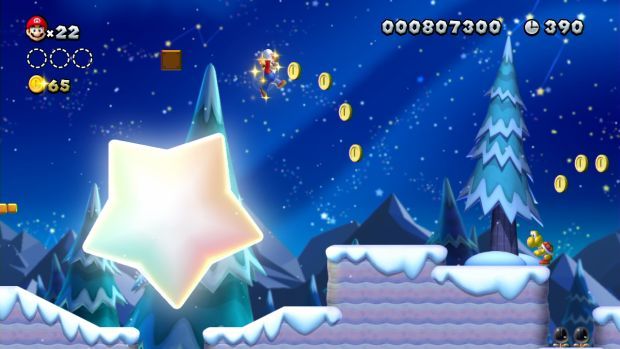 Less-skilled players are once again catered to with a little condescending help in times of repeated failure. Die on a course enough times, and you can offer to have Luigi take over and play the level for you. Players can step into Luigi’s shoes at any time and take over where the CPU left off, allowing them to pass a particularly tricky obstacle or even clear an entire course. While the hardcore players will be angry at the further “dumbing down” of videogames, the fact that you have to die quite a lot, not to mention how boring it is to watch Luigi slowly play through a stage, ensures that this feature is not something easily exploited. Skilled players will barely, if ever, even have this feature offered, so it should bother nobody and be accepted gratefully by those who may need it.

Though NSMBU is a return to liveliness, it still must be said that a lot of the freshness of the original concept is long gone, and the foundation upon which this new chapter is built happens to be nothing we’ve not seen before. The game is pure quality, through and through, but it’s not the kind of breathtaking experience that once it was. Some of the sheen invariably comes off when such a simple idea as New Super Mario Bros. is repeated as many times as it has been, and while this is a vastly entertaining experience that does a lot of what New Super Mario Bros.2 didn’t, the recent release of that latter game has unavoidably taken some the wind out of the sails of this one.

There are some moments where the pacing seems to drop off and the game settles into safe territory. Bosses are relatively uninspired and more or less retread old ground with maybe one or two little spins on the formula. A few levels also mine for nostalgia, but come off more like repetition, especially when it comes to the “snaking” stages and mid-world castles. Likewise, the game’s worlds are quite traditional, from the usual mountains and deserts to ocean and sky-themed environments. The watercolor course mentioned earlier could have supported an entire world, but bold new themes are only ever explored in their own little levels, while the larger portions of the game are not quite so brave as to reinvent themselves. 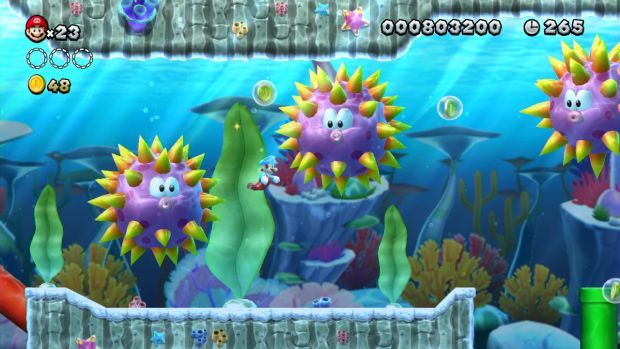 Nevertheless, New Super Mario Bros. U is a largely brilliant return to greatness for a series that had been teetering on the edge of banality. It’s helped that, for the first time, we get to see a Mario game built for HD viewing, and it is glorious. The endearing animations and gorgeous color scheme were made for modern televisions, to the point where one almost feels compelled to look back on the Wii’s first-party library with sad regret. I was fine with the Wii while it lasted, but New Super Mario Bros. U will make it almost impossible to go back once it’s been experienced in its new resolution.

Local multiplayer returns for this console installment, though thanks to the Wii U’s limitations, only one GamePad can be used. This is exploited for a new co-op feature that has players controlling characters directly with Wii remotes, while the GamePad player can interact with the world itself to generate new platforms and deal with enemies. It’s a unique little idea that can certainly alleviate the challenge for players, but at the same time I can’t help but feel that the GamePad side of things is a little boring. When you play a Mario game, you want to play a Mario game, rather than feel relegated to a jumped-up cheerleader position.

As well as the main game, there is a Boost Rush and Coin Rush mode, playable solo or cooperatively. These challenge modes take previously cleared courses and have you trying to either clear them as quickly as possible or with as many coins as can be grabbed. While not worth the price of entry alone, they provide a neat little distraction for those who want some extra replay value. 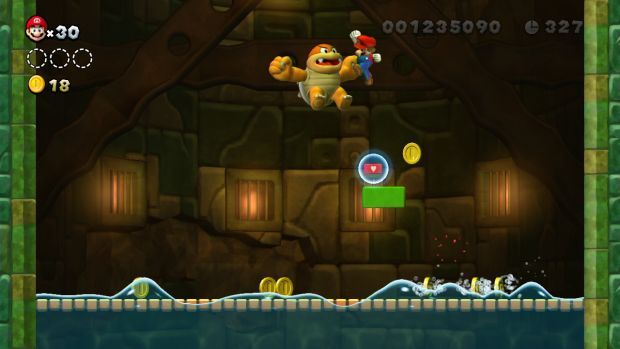 New Super Mario Bros. U is perhaps not the best game to show off the Wii U’s capabilities. It keeps things very familiar, to the point where the expected input method is actually an upturned Wii Remote (the game’s start screen even says, “Press 2,” despite the GamePad having no “2” button). However, a game like this is good to have early, as it demonstrates that, just because Wii U games have access to new features, that doesn’t mean they need to be implemented just for the sake of it. NSMBU keeps it simple and elegant, while also revealing how the GamePad can be used as a theoretical handheld device.

GamePad players will not need to use the touchscreen for any extra features, instead getting a stream of the game exactly as it’s represented on the television. It’s more or less useless, yet it does show off the startling response time of the GamePad screen, and while the visuals are a lot more drab as opposed to the television presentation, the idea of being able to turn on the Wii U, start the game, and play without ever having to turn the TV on is a whimsical thing to experience, if only the once. 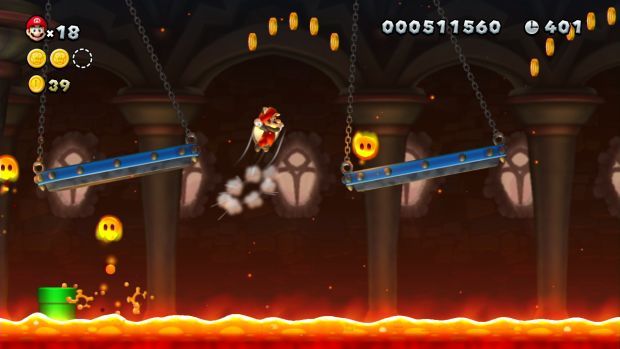 New Super Mario Bros. U is a great little platformer that kicks off the Wii U launch with a bang. Players know exactly what they’re getting with this one — an entertaining and incomplex bit of gaming that provides challenge and smirks in equal measure. While certainly a “safe” game to launch with, it is by no means unremarkable, and the only people who would fail to have fun are those with a fundamental aversion to Mario or platformers in general. Literally everybody else would find it incredibly difficult to dislike this one … even if some of those latter stages will make them temporarily despise it.

Because nobody likes lava levels. Nobody.