Look at this photograph

It’s still a bit jarring that there has been two decades between Pokémon Snap games. The first was a highlight in any Nintendo 64 collection; it was a quick, fast, instantly understandable game. Hop in a buggy, roll through the wilds of the Pokémon world, and photograph as much ambient Pokémon wildlife as you can, then laugh as Professor Oak throws your photos in the trash.

New Pokémon Snap feels both old and new. There are new sights to see, new Pokémon to photograph, and new tools to encourage Pokémon into more interesting reactions or interactions. The graphics and effects are obviously much nicer, and there is more happening on-screen than the N64 could’ve handled.

Yet it’s still the same old Pokémon Snap. It is an on-rails photography experience that encourages multiple attempts and determination to nail shot after shot. I still spent a fair amount of time just tuning in the right trajectories to lob app- excuse me, “Fluffruit” at wild Pokémon. I’d take a shot I swore was gorgeous enough to hang in the Poke-MoMA, and the professor would say the subject wasn’t centered or large enough and give me a paltry bronze rating.

Same as it ever was, New Pokémon Snap is still a Snap game. It’s also a very good one. 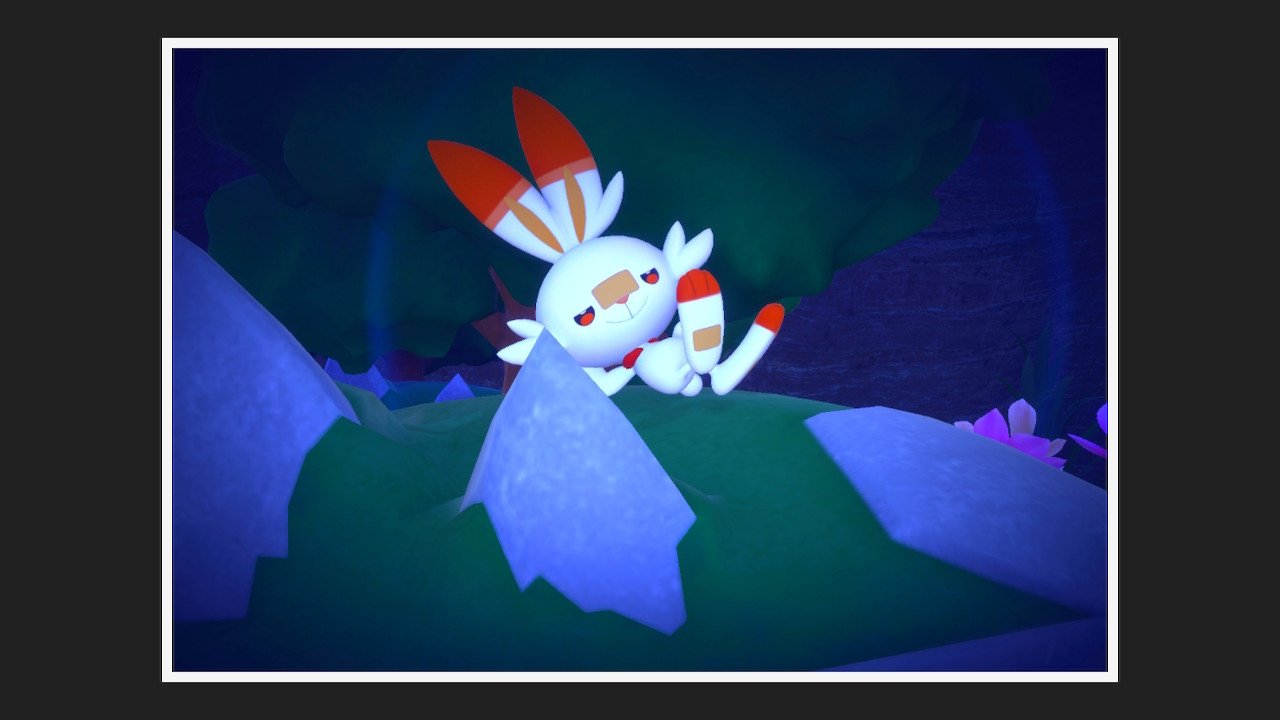 For this photographic outing, you take on the role of a male or female photography assistant, setting out as the field researcher for Professor Mirror. Your crew is looking into the Lental Region, and the curious Illumina phenomenon that causes some Pokémon to glow under the right circumstances.

Of course, learning more means strapping you into a NEO-ONE buggy and sending you off on your merry way through jungles, mountains, reefs, deserts, and a literal volcano. During your trek through dangerous locales, you’ll be photographing Pokémon, both during the day and, this time around, at night, too.

There are plenty of “tracks,” each with a pretty wide swathe of Pokémon from across the generations thus far, but the design of them is really fantastic. Each route is an unbroken track with a few branches, allowing for different paths or ending points, and every track has its own Research Level too. By earning points through photos, you can bump up the Research Level, which adds more Pokémon to the area and new potential for shots.

It’s in these repeat runs that New Pokémon Snap shows its appeal as not just a fantasy wildlife photography sim, but a theme park ride. Tracks have new details to notice each time you embark, with even more thanks to the Research Levels that vary up the Pokémon and events that can happen. Discrete sections are carved out to signpost progression and sightlines both help direct the player where they should look and hide what secrets might be right around the bend. New Pokémon Snap feels like an amusement park at times, full of slow rides through a bunch of different biomes and various times of day, and tons of experiences to snap away at. 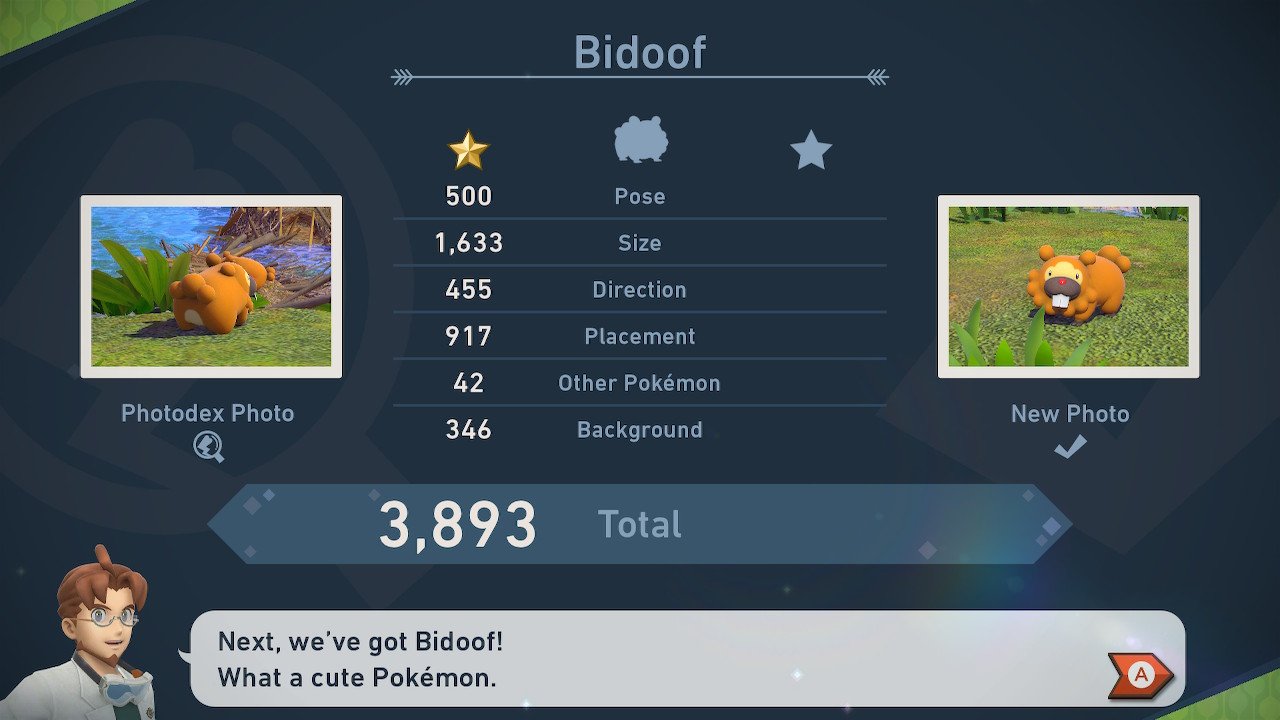 The photography is as solid as it’s ever been. While notching up the camera sensitivity is an absolute must, the simple act of photographing fascinating images for your Photodex is still incredibly fun. Every Pokémon is moving around and reacting to its environment, and it’s clear when they’ve been set up in ways that let them potentially interact with each other, leading to incredible photo ops. Still, the best are the unplanned coincidences; my favorite photos were ones where I caught a little moment almost by accident.

Of course, there’s been decades of development in the realm of photo modes between the Nintendo 64 and the Switch. New Pokémon Snap keeps up with the times by adding both a photo processing suite, letting you alter and futz around with pictures after they’ve been graded, and a suite of filters and stickers for sharing online. Also, sharing online! While I’ve never felt compelled to fool around with the editing tools too much, the ability to share your photos in an online album with captions and stickers is a lot of fun.

There’s also a new set of tools to use in your pursuit of rare Pokémon behaviors. The scan function can highlight points of interest and act as a ‘say cheese’ button, the Pokéflute is now essentially an MP3 player on your camera, and Fluffruit serve double-duty for both luring and pelting Pokémon. 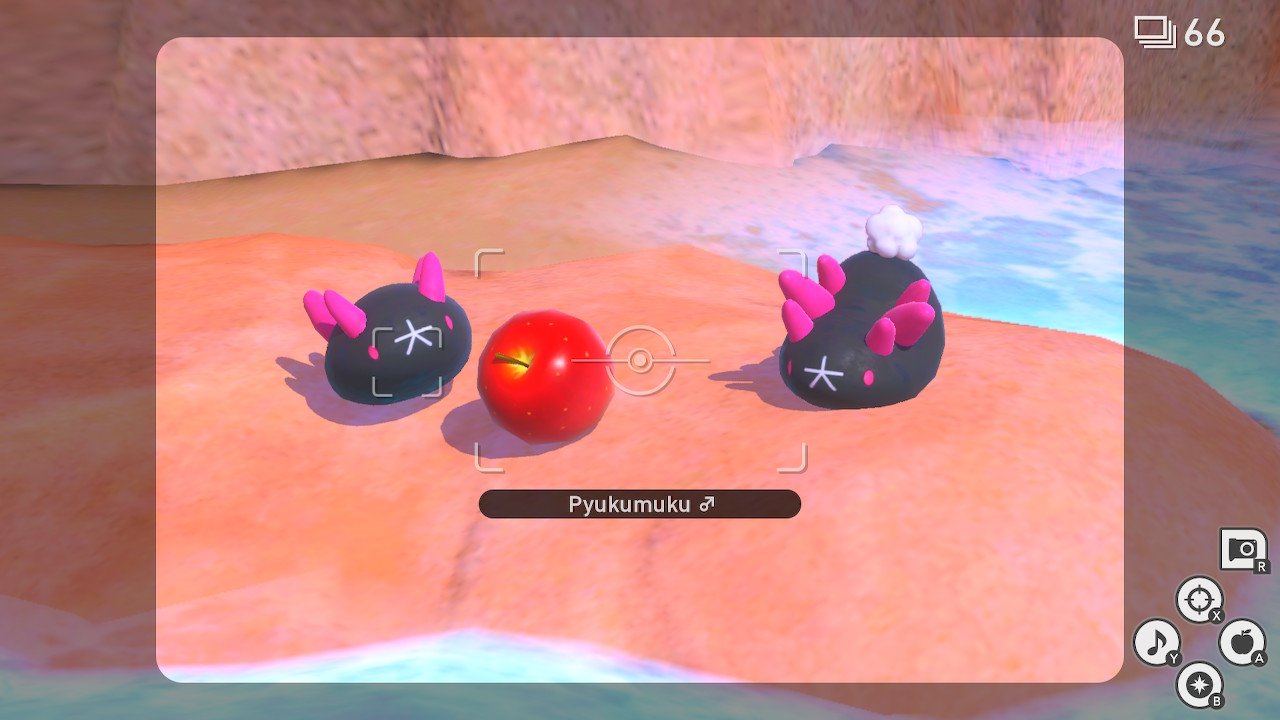 Illumina orbs are the big change, letting the player either light up a Pokémon with an incandescent glow or illuminate Crystabloom plants, which can kickstart special events. They’re interesting and make for some pretty pictures, and ultimately the orbs themselves were fine.

The Illumina Pokémon, on the other hand, are a bit frustrating. New Pokémon Snap adds special “Illumina Spots,” which are special courses centered around particular Pokémon. The goal is to light them up with the Illumina orbs and then snap pics of them, but while this starts out as an interesting novelty, it becomes a weird rail-shooter sequence as the game goes on, as you have to anticipate their moves and overcome obstacles in order to get the best shot possible. They’re long, very repetitive, and dreadfully slow until you get the boost upgrade. I’m eager to delve back into the regular courses, but it’ll probably be a while before I go back to the Illumina spots.

These Illumina sections also exacerbate something that may irk those who are coming to the Snap spin-offs for the first time: repetition. Just like the original, New Pokémon Snap is a “run-based” type of game. You hop in the buggy, roll along the track, get photos, and take them to the professor. An evaluation rubric then breaks down your photos, both into star quality (seemingly based on overall score) and number of stars which, best I can tell, meant the rarity of the action the Pokémon was performing.

The score goes up based on the Pokémon’s pose, how it’s framed, whether there are other Pokémon in the frame, and more. More points means better photos, which add to your research ranking and act as new high marks to clear. While I rarely had to run a course more than a couple times to progress in the story, there are a few points where you’ll need to either grind some score, or suss out one of the ambient “puzzles.” 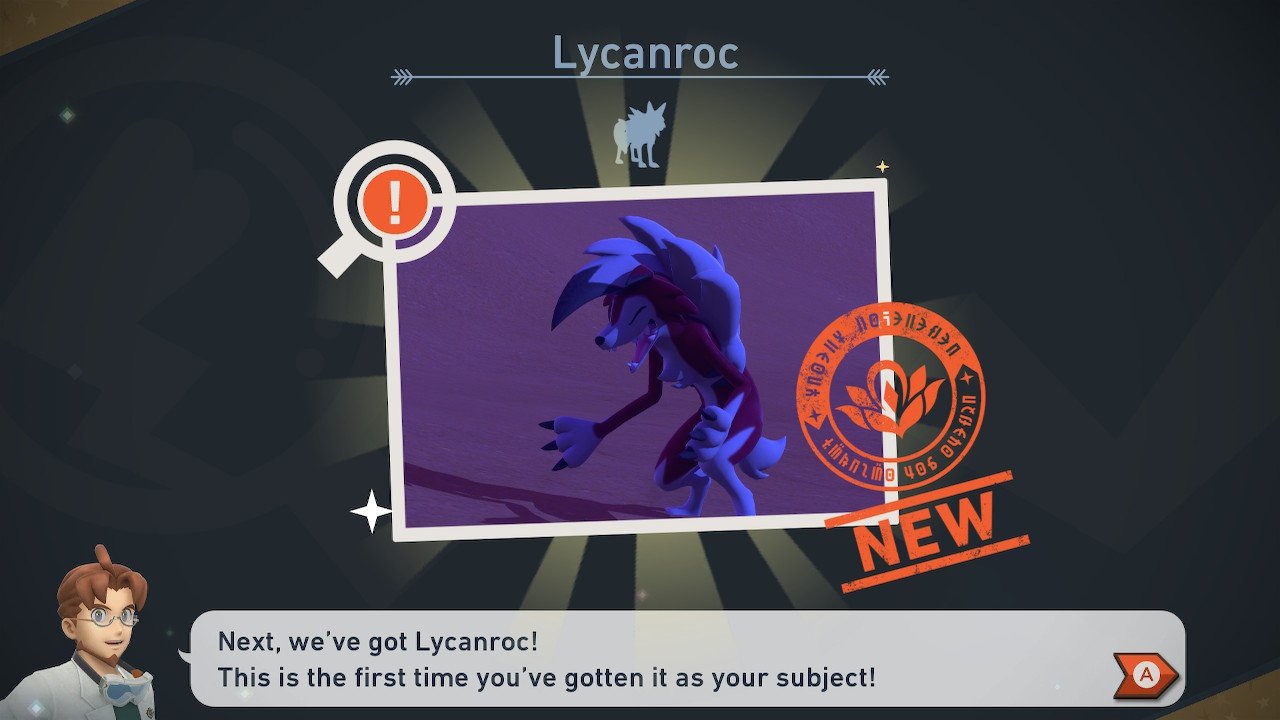 Setting up Pokémon to perform certain interactions in a Rube Goldberg machine made of monsters is another hallmark of Pokémon Snap, and New Pokémon Snap has a good few. It’s rare one required for progression is difficult to find—the one exception being an odd one in the reef area—but there are a few hidden legendary Pokémon to discover, both during the narrative and after the credits roll, as well as some rare photo opps. Sadly, it seems like there aren’t any evolution puzzles this time around; at points it felt like the game was taunting me with a Magikarp, poised in a spot that should’ve let me knock them into something and watch a Gyrados emerge. It’s a strange absence, given how well-known the N64’s evolutions were.

After completing the brief campaign in a matter of anywhere from 8 to 12 hours, snapping shots and hunting secrets comprises the bulk of the gameplay. There are challenges to nudge you along towards some of the more esoteric interactions, and snagging every Pokémon is a challenge I’m still undertaking, but this is a game about snapping pictures on courses and then improving on them.

Yet New Pokémon Snap‘s dedication to maintaining the winning formula of the original is what I love so much about it. It doesn’t matter if you have to repeat courses again and again if they’re as good as New Pokémon Snap‘s, and it’s okay to fiddle with some unwieldy mechanics if it means some really cool snaps to share with friends. This entry existing in the age of social media is a huge boon too; rather than rushing off to Blockbuster, I’m eagerly sharing my favorite pics to social media. 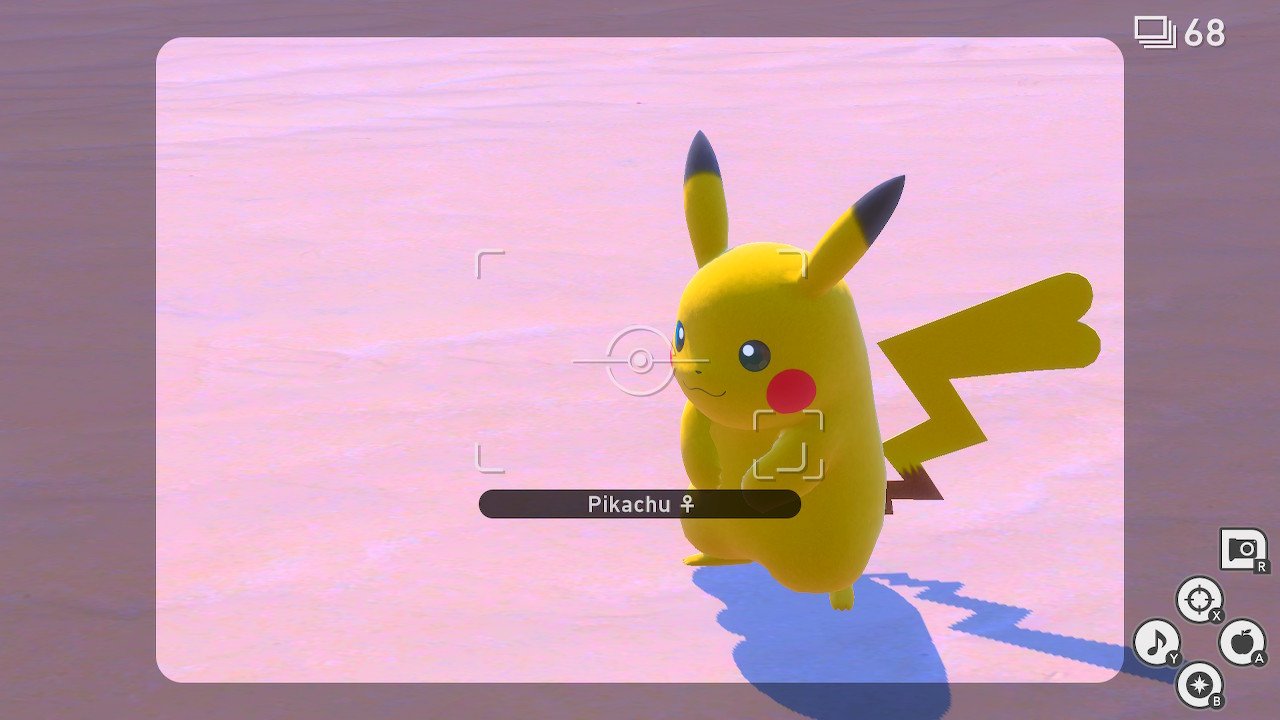 New Pokémon Snap is a sign of the times in that way, but while it’s adapted to the age of Instagram, it hasn’t lost its soul in the process. This is the Pokémon Snap you remember, with a few additions that don’t always hit as resoundingly, but the foundation has been well-kept. It was a blast to spend a weekend just blasting through every ride this park had to offer, and they’re varied enough that I know I can go back today, tomorrow, and months from now, and still find new things to photograph, new interactions to fool around with, and a good time to be had.