Neo Aquarium is weird. That was all I knew about the game when I started it up. Well, that and the fact that it features crabs with lasers. No more needed to be known, I thought — this was going to be wonderful. I should have known better; the sea only brings trouble.

Scrapping with all sorts of underwater life brought me no joy, but plenty of laser-caused headaches. This is a game with layers, and underneath its zaniness and absurdity lies another, crustier layer. It’s the layer of a bad game.

Since humans are generally awful, apparently, we’ve been getting up to no good in the future. It’s millions of years in the future, to be more specific, yet still completely non specific. Using subspatial transfer technology, humanity has been taking parts of the sea, and plonking them in these new-fangled neo aquariums.

Due to science and other sensible things, sea life has evolved to have deadly weapons of mass destruction and lasers. Lots and lots of lasers. Crustaceans in particular have been affected, making them the big kahunas of these little pockets of ocean. With chips on their pincers, these little buggers now fight for dominance in a crab-eat-crab world. It’s a dark time, apart from when everything is lit up like a laser battle in a disco.

Such a bizarre premise really demands a story mode, or at least some sort of explanation, but you only get one of these. The story mode, and eventually the unlocked ex mode, piles on the craziness and only leads to confusion, and eventually madness. Each battle is prefaced by a quote, usually discussing philosophy, quantum physics, and biology with the irreverence of a stoned teenager. Here’s an explanation of how crustaceans developed explosives: “[They were] able to create unique aqua explosives through use of special bacteria, irritation, and Wikipedia.” 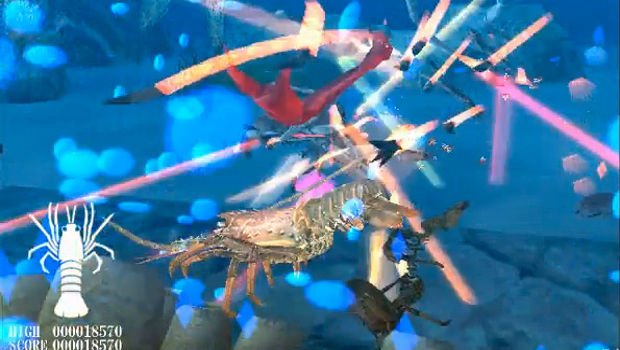 The bouts themselves are absent any real context, and basically just involve you moving through an arch and then fighting other crustaceans. As I tore into yet another crab, I started to wonder if there was some backstory to our rivalry. Were the lobster and the crab once friends, only to be torn apart by competition and the need to survive in the harsh world of the neo aquarium? Potentially tragic stuff, to be sure.

The option to control crustaceans via keyboard is a horrible joke. Try it and the game will mock your impotent attempts to maneuver underwater life. The gamepad alternative is a significant improvement, though a better explanation of the controls and mechanics would have been nice — it’s not particularly intuitive. Most of the combatants have a simple laser and pincer attack, but they have a fair few tricks up their sleeves… or in their shells. Homing missiles, ghost tentacles, armies of possibly sentient pincers, even the ability to detach their limbs make these guys bloody deadly. Some of them can even pick up rocks! Everything is weak against rocks, apart from paper and some Pokémon.

When their cosmically fueled powers aren’t quite up to the task, the gladiators can also enlist the aid of their underwater brethren. Struggling to kill that pesky submarine? How about an army of sea anemones and a bunch of sea cucumbers? They are powered by physics. 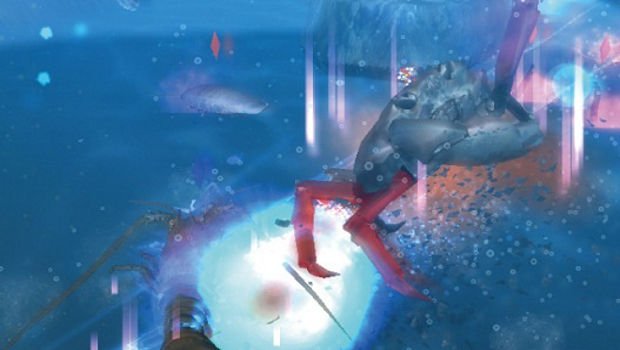 Battles are exceedingly short, but damn do they feel long. The floaty, slow movements on the characters do not make for the most intense battles, nor does running around in a circle shooting each other, but that’s what it usually boils down to. While there’s potential for tactics, with broken limbs being regenerated through shell shedding at the cost of power, and gathering allies from the sea floor, it never really goes anywhere. Once you get over the novelty of playing a barnacle who can only move by reproducing, or scuttering along sideways as a crab, it’s actually pretty boring.

If you’ve seen any screenshots or trailers then the cat’s already out of the bag — this is one ugly game. The term eyesore was coined for just such a creation; one devoid of any aesthetically pleasing features. Everything from the murky water to the freakish animation made me just want to close my eyes. I’m actually thankful that the game was stuck on a 4:3 aspect ratio, meaning less of my screen needed to be soiled. The overall presentation is equally hideous, the HUD being something I would have cringed if encountered even a decade ago.

The only draw here is the wacky nature of the title, and even that starts to become a little tired. Unlocking the ability to play as a scuba diver or submarine was a motivation to keep playing, but they are just as little fun to take control of as the lobsters and crabs. Saying that it’s at its best when you’re just watching it should be a testament to how joyless playing it is, because it’s not particularly nice to look at either. It can be funny in its oddness, but it fails to ascend to actually being fun. There is a demo, which pretty much gives you all the experience you need of Neo Aquarium.

[Neo Aquarium is available for purchase on Playism.]