With 2008’s Burnout Paradise, Criterion Games solidified its spot as the king of fast-paced, arcade-style racing. So when Electronic Arts decided it was ready to take the Need for Speed series back to its early roots — with its high-speed, open-road chases — it was smart to tap the Guildford, England-based developer for Need for Speed: Hot Pursuit.

The result is one of the best Need for Speed games to date, without question. It’s a high-velocity, eyebrow-searing racer that sets new standards with an innovative design that closes the gap between single-player and multiplayer experiences like no other game before it. 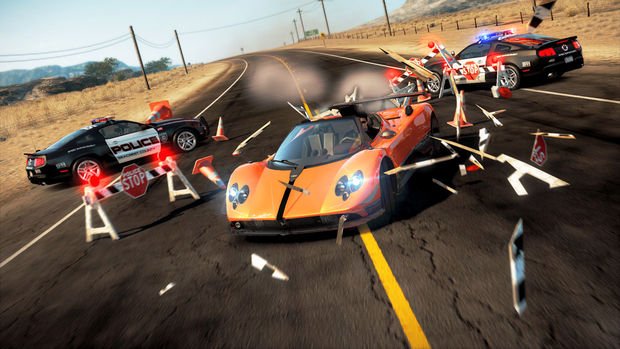 Let’s get it out of the way right now — Need for Speed: Hot Pursuit feels and plays like a Burnout title in almost everything but its name. Hot Pursuit tries to straddle a thin line between realistic car handling and accessible arcade racing, and while it definitely nails it, it’s unquestionably closer to the latter. It’s basically car porn, with slick and exotic rides, and the handling and feel you’d expect from high-end vehicles. It’s never so demanding that folks who aren’t interested in hitting that perfect line will feel left out, but is instead a game that encourages you to revel in maximum velocity at all times.

Hot Pursuit’s “Career” mode puts you on both sides of the law, alternating between speed-junkie illegal racer and police officer. As either, your goals are essentially the same — drive as fast as possible. The difference here is that as a racer, you’ve got the fuzz on your tail; as an officer, you are the tail. With no real narrative to speak of outside of “put the pedal to the metal and don’t stop,” the career is completely open, allowing you to choose events from various parts of the map, spread across the fictitious Seacrest County. It’s a bit odd at first, not being able to choose your allegiance; you alternate between breaking and enforcing the law, which earns XP and ranks up both careers separately but congruently. But choosing one over the other would mean you’d miss out on the pleasures of stepping into each role, which are equally exhilarating in their own right.

Events on either side of the law are broken up into a few basic categories, like straightforward race events, timed events (such as a “Time Trial,” or the police version, “Rapid Response”), and so forth. “Hot Pursuit” races are the highlight, a typical race with the wrinkle being that cops are looking to shut it down by any means necessary. As a racer, these events are nerve-racking, with police cars aggressively trying to take you out as you speed towards the finish line against other racers. As the police, these events feel a lot like Burnout’s “Road Rage,” only you’re attempting to take out a finite number of racers before they reach their goal. 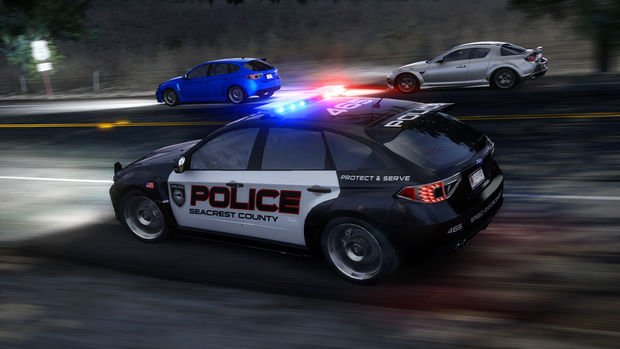 Spicing things up a bit, both racers and police have their own sets of equipment, which adds an interesting Mario Kart-like layer of offense and defense to each event. As a cop, you’ll have access to police department backup, such as roadblocks and helicopter support to slow down fleeing racers. As a law-breaking bad guy behind the wheel, you’ll be able to jam police communications, basically a defense against anything they have in their arsenal. Both sides can use targeted EMPs or throw down spike strips to slow down vehicles and get a pesky pursuer off your tail. Each event doles out equipment differently, and they’re all available in limited amounts (with “cool down” times for follow-up use), striking a nice balance on both sides. Outside of Hot Pursuit’s balls-to-the-wall action racing, these tools add an exciting layer to the gameplay that set it apart from events in the Burnout series and other racers.

Hot Pursuit also seems like a tighter experience that Criterion’s last title. While Burnout Paradise threw players into an open city where they’d find events sprinkled about, Hot Pursuit compartmentalizes Seacrest County into bite-sized events. The map itself is massive and varied, and can be fully explored in the game’s “Freedrive” mode, but there’s something quite comforting about hopping into these pre-packaged events and targeting medals and other goals. Given how big Seacrest County actually is (it’s hard to get a sense of this unless you explore it in “Freedrive”), it should go without saying that the races vary in look and feel, with dozens of off-the-path shortcuts and hidden routes to explore. Getting to know each track and each event comes with time, and there’s nothing quite as a rewarding as mastering a route and shaving seconds off your best time, or finding the best ways as a police officer to blindside a racer.

So Hot Pursuit has all of its core elements in place, with its fast cars, dynamic events, and breathtaking speeds. But where Criterion really takes things to the next level is the game’s social aspects, which truly bring Hot Pursuit to life like no other racer. The key is the game’s “Autolog,” a consistent experience that has you competing with your friends 24/7, constantly keeping you up to date with their game progress, their most recent records, goals obtained, and more. It’s an absolutely seamless setup that easily lets you compare event results in an elegant and streamlined way. 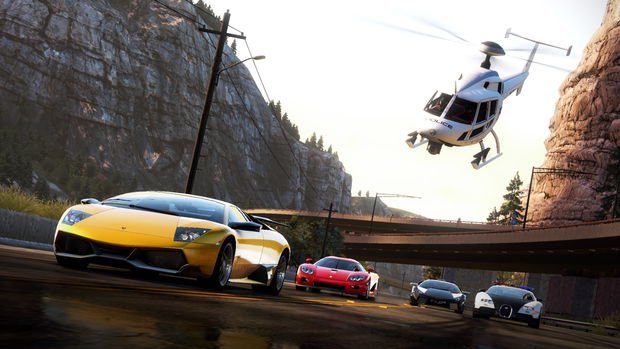 Other games have hinted at it, but none quiet have nailed it like Criterion has with Hot Pursuit. There’s almost never a time when you have to navigate through a series of menus to see where you stand against your friends; it’s just there, and you can’t miss it — it’s as important a part of the game as the cars you drive. “Autolog Suggests” takes it even further, utilizing your entire friends list to tailor challenges and suggest events to you. Completed everything in the career mode? Maybe a friend has, too, and he or she has done it better — Autolog will tell you, and kick your ass into gear, egging you on to take on the next challenge. You can even post messages on the in-game “walls” of your friends, taunting them or sending out challenges.

It’s a system that relies heavily on how many friends you have that are also playing Hot Pursuit, and your mileage on what you get out of this will vary accordingly. Autolog can even suggest friends, if you’re normally the loner type. But even playing the game on a smaller scale (that is to say, not against my personal friends, instead in a limited review capacity), it’s obvious that Autolog can incite some serious competition. I found myself pushing my records higher and higher, replaying events that I normally wouldn’t have if Hot Pursuit didn’t offer such a sophisticated competitive environment.

This kind of “always-on” competition doesn’t get in the way of the game’s live multiplayer matches, which let you compete against friends (or strangers) in online events composed of the same modes you’d find offline. The rush of the offline races and chases translates gloriously to an online environment; with so many variations available for each event, it seems like it could never get old. Want to race with one cop chasing the seven remaining players? How about one player getting chased by seven cops? You can imagine things get pretty intense, and no matter who comes out on top, it’s always an incredibly satisfying experience. 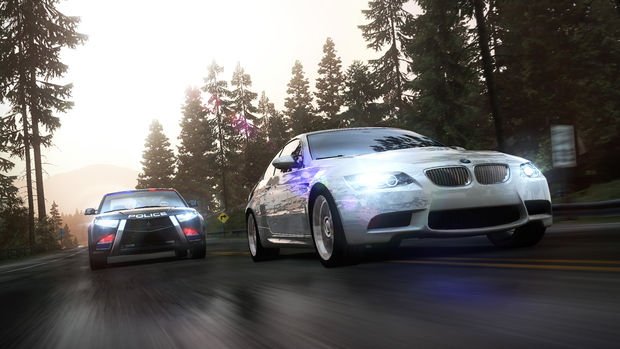 Unfortunately, Hot Pursuit doesn’t appear to offer any split-screen race capabilities, which is a bit of a downer. It’s obvious that Criterion spent most of their time focusing on online connectivity and networking, but offline “cops versus robbers”-style split-screen chases would have been a welcome addition.

Criterion hasn’t rebooted the Need for Speed series, instead taking classic key elements and injecting them with new life for the current generation. It delivers a near-perfect competitive experience, in a way that few games — racing or otherwise — can. Hot Pursuit is not only a defining moment for the series, but for arcade-style racing, period.