After the drop in quality between 2009’s CSI: Deadly Intent with its crazy cases and the plain mediocre CSI: Fatal Conspiracy in 2010, it appears Ubisoft has moved development of the similar and new NCIS game from Telltale Games to its in-house Ubisoft Shanghai studio.

These games are meant for two audiences only — fans of the show and achievement hunters — and NCIS shouldn’t disappoint either of them. In fact, it’s much better than the current generation’s CSI games. 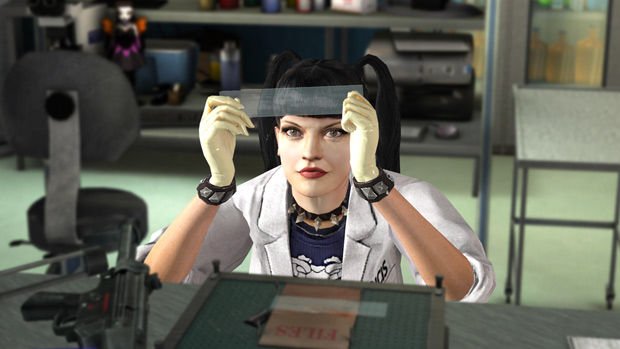 The NCIS game is set during season 9, or just after season 8. It’s been one year since Ziva David has passed her U.S. citizenship exam and even Anthony DiNozzo Sr. (voiced by Robert Wagner who plays him in the TV series) makes an appearance.

During four seemingly unrelated episodes the NCIS team has to solve cases ranging from a casino robbery, a bank robbery masking an Arab country’s embassy break-in, the murder of an officer in an Iraq military compound, and finally some circumspect deaths surrounding the arrest of DiNozzo’s father in Dubai. As a mini-arc of sorts, all cases come together in the end to unravel some TV-logic terrorist plot. If you watch NCIS, you know what to expect. 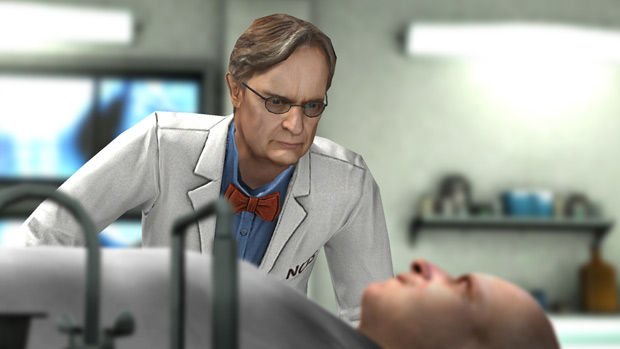 The structure of NCIS is pretty similar to the CSI games and so is the gameplay. Instead of only moving your cursor around to select points of interest, you now move a character with a cursor. It gives you a bit more of an emotional connection to the characters of the show than a mere cursor does, although you’ll still just move a cursor around crime scenes to select stuff, or point Abby to a lab machine to work her magic.

While the crime scenes feel a bit like CSI-lite, due to all evidence being gathered by simply taking photographs and nobody wearing gloves, there is still some occasional pixel hunting to find that last piece of evidence. Contrary to the CSI games, you’ll always have an on-screen indicator of your progress as a percentage and it’s impossible to miss anything before moving on.

Back at the NCIS office, Abby and McGee will do their respective things. That means they will do the kind of mini-games the CSI games had, but this time around they are a lot easier and a lot clearer. It’s impossible to mess anything up; although you can run out of tries — indicated by Caf-POW drinks — you can always restart these sections without losing anything.

Playing as McGee you’ll perform some simple memorization and reaction mini-games to “hack a database” that you’d think NCIS would have access to (like conference logs from Naval Command), or keep a reticule over a moving vehicle as he tracks it with his satellite. Abby’s job involves grabbing fingerprints from evidence and doing analyses. Chemical analysis simply involves matching shapes to a spectrometer output, while bullet casing and fingerprint analyses are a matter of matching the evidence to the correct image. 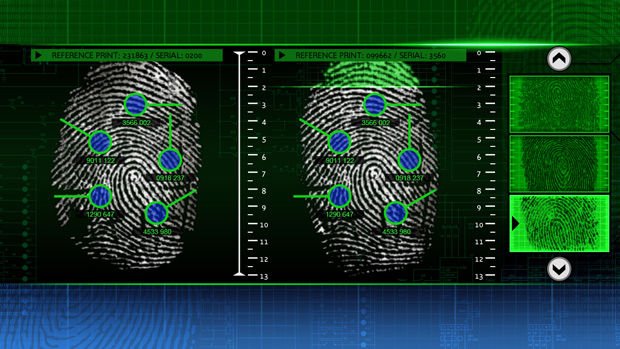 Everything is like the CSI games at heart, but there are a couple of differences that set NCIS apart. For one, everything is much, much easier. As in: it’s impossible to fail throughout the entire game. Anyone can play and complete it; the only reason not to complete it is if you get too bored or frustrated with not being able to find that last bullet in a crime scene. The interrogations now only require the press of one button in a QTE (it’s the same button every time) to keep the pressure on and sometimes confront subjects with evidence that conflicts with their statement.

This evidence is no longer just one piece of evidence out of dozens, as was the case in CSI: Fatal Conspiracy for instance, but now it is complete and clear proof of something. Whenever Dr. Donald “Ducky” Mallard (the only other person to be voiced by the TV show character’s actor), McGee or Abby has run through all the evidence with their analyses, Gibbs will tell them to “DEDUCTION BOARD!” and combine evidence they’ve analyzed on the Deduction Board — that big screen they always use in the show when they are explaining how things are connected to the case.

This prompts a matching of evidence that usually makes sense to match, sometimes restricting the player to combine obvious matches until you have made other prerequisite matches first. After you match two connected pieces of evidence, you have to select the right answer as to why they are connected. The other answers are always ridiculous, like “<Terrorist guy’s name> just loves America,” so again this is hard to mess up. When you’ve connected enough evidence on the Deduction Board, it becomes proof you can use to confront people during interrogation.

Besides the CSI mini-games receiving some simplification, the NCIS universe treatment and a visual make-over, the game on the whole feels more like an NCIS game than CSI: Fatal Conspiracy felt like a CSI game. Characters will interact more during and outside of gameplay, giving you the impression you are watching the NCIS team doing their job at your command instead of being a nameless CSI employee, and sometimes there is some hilarity between DiNozzo and Ziva. The series’ comedy flair makes an appearance here and there, but the game is a bit more serious than a random episode of the current season of NCIS. Apart from the occasional jokes and banter, the characters don’t act like complete clowns and the only reference to Bert the farting hippo is in the loading screen logo. Ziva is really, really dumb in the game, though, and not funny or charming at all. 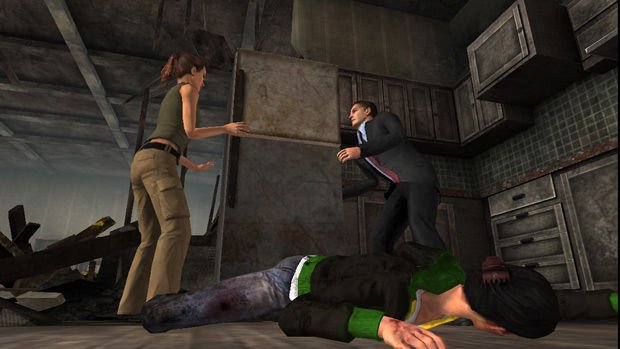 Of more inadvertent comedy value is the act of moving objects around on crime scenes. You’ll be prompted to press a button and move the thumbstick to one location in order to move a box, slide a door open, or have DiNozzo push Ziva upwards so she can make a picture. But if you don’t move all the way to the indicated direction, the characters will move back into their original position. You guessed it: you can move back and forth for some inappropriate and sometimes hilariously juvenile non-canon character animations.

Silliness aside, the added interaction between characters and the increased clarity of mini-games throughout the game gives NCIS what it needs to be better than the past CSI games. That doesn’t mean it’s a great title or an example of what this type of game should be like — L.A. Noire is still the best example of the detective adventure genre — but it’s better than you’d expect it to be, even though any veteran player will scoff at the further reduction in difficulty and the game’s 4-5 hour playtime with no replayability to speak of. Achievement and trophy whores can be pleased, though, as there’s now no way to mess up getting that 1000/1000 or Platinum trophy in this game.

Graphically it is a marked improvement over previous CSI games, even if it still only looks “okay” at best. For what it sets out to do NCIS does the job with its virtual counterparts of the team, although Abby looks even creepier than in the show. Some might find the lack of blinking eyes disturbing, too. There is also one satellite tracking mini-game in the third case that is ridiculously hard due to the default controller sensitivity; a strange oversight given that the entirety of the game feels tailored for a casual player. Likewise, this default sensitivity can sometimes make it a bit hard to find evidence on the crime scenes with a controller. 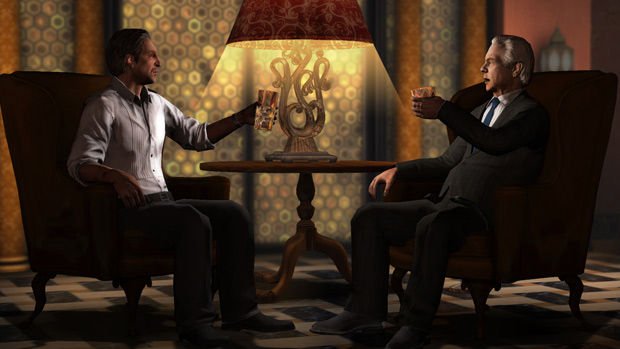 It might sound like this is just some stupid game that you can’t believe anyone would play, let alone buy. But you know what? There’s an incomprehensible addictive quality to NCIS. It’s all too easy to keep playing it until an episode is over and even then it’s easy to immediately jump into the next episode. Sure, it won’t astound anyone but the game does provide a very solid NCIS experience for fans of the show that don’t play a lot of games — if any.

NCIS is the best of Ubisoft’s series of licensed forensic adventure games, which admittedly may not mean that much depending on your gaming preferences; you just have to accept that it was made for a very specific audience. If you don’t care about NCIS or virtual points, there’s really no reason at all why you should ever play this. Just like there is little reason to play any Naruto game if you hate Naruto, or Dark Souls if you can’t stand dying.

This is the kind of game you can easily give to an elder family member if they are a fan of the show, without ever having to explain how it works. It offers a couple of casual evenings worth of extra NCIS entertainment with your favorite characters, and for some fans that might be just what they want.