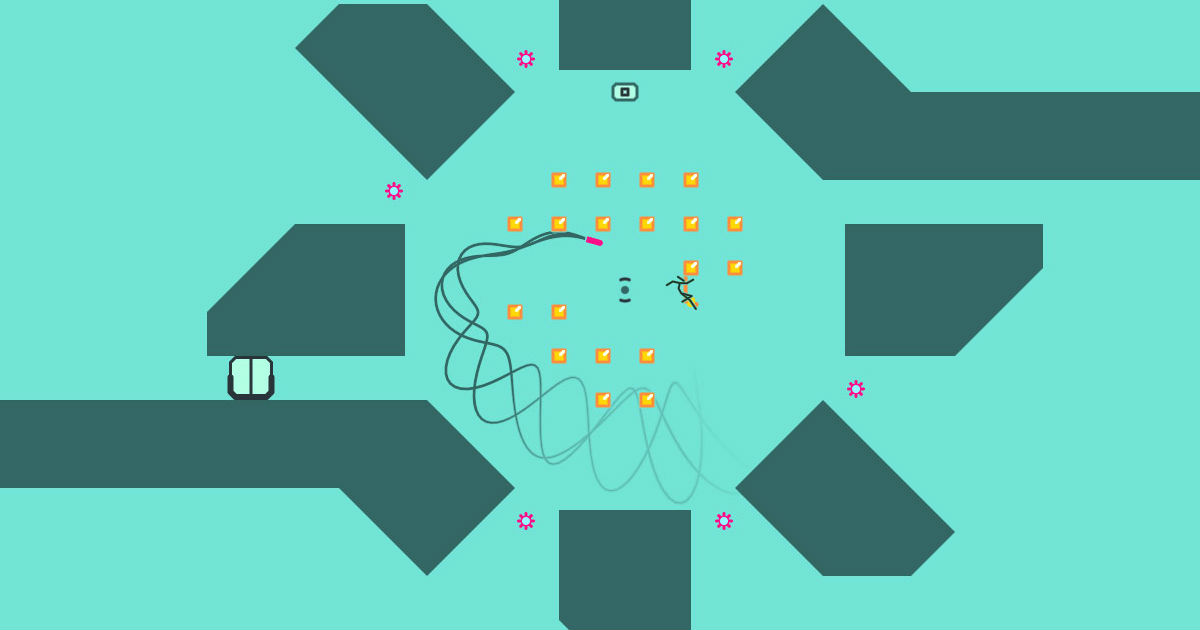 I don’t think anyone could have predicted the success of the original N+ (and its predecessor, a flash game called N). I was sitting around my dorm playing Devil May Cry 3 for the billionth time, and my friend came in and said “dude, you have to play this game.” It was N+, and we spent hours taking turns trying to best the single player, and even more time playing co-op.

For those of you who missed out on the classic duo, N++ pretty much delivers that exact same rush.

If you haven’t played N+ before, you’re in for a treat. This series is predicated on tough jumps, pinpoint controls, and a physics system that’s built on momentum. All you can really do with your ninja avatar is jump, but you’ll be able to use acceleration and specific leaps to your advantage. It’s a platforming fan’s dream, as nearly every level presents a unique challenge that will force you to master every facet of the control scheme.

The general layout of the game is also dead simple. You have 90 seconds to complete each level, and picking up gold along the way increases your timer. On every stage you’ll need to brush against a switch to open up the exit door, then make your way to said door. It’s cleverly paced, as you can choose to go for as little or as much gold as you want — though hardcore players will likely want the clear bonus earned for picking it all up.

N++ is massive in size, and to properly convey just how big it is, let me just give you a concise breakdown:

Yeah, that’s a lot of levels right? What I really like about the campaign in particular this time around is that it does a better job of acclimating players to the game, and all of the different concepts within. These arenas are short enough where you won’t get bored learning the basics, but you’ll be adequately prepared for what’s next. While I finished most of the solo stages, I wasn’t able to complete them all, and I played for roughly 30 hours.

Co-op is particularly fun (with up to four players), as some stages specifically require people to suicide into hazards to let the other player complete the level. Races are also a rush, requiring one player to get to the goal first, and while they operate similarly to the solo sets (they can even be played by yourself), they can get crazy with multiple people, and if you really want, you can play the solo stages with friends. Sadly, there’s no online play to be found for any mode, which is a disappointment.

In terms of extras, I like how the game keeps track of crazy stats like how much of your time was spent in the air, on the ground, and on the wall, and there’s a ton of really cool UI and visual filters to unlock and test out.  If you’re so inclined you can also create levels with all of the available tools used to develop the game, and share it online. Even pre-launch there’s already over 100 levels up, and the coolest one I found automatically takes you through a giant level without pressing anything. Others are more artsy, with messages and poetry that gradually appear on-screen.

N++ might lack online play and feel like more of the same, but it’s pretty much everything a platformer fan could want out of a sequel. It’s still challenging, it has a boatload of levels, and it’s a hell of a lot of fun to play.