Last year, Renegade Kid released Mutant Mudds on the 3DS eShop, where the “12-bit” throwback platformer became an immediate hit. Since then, ports have appeared on PC and iOS, each version introducing new levels and features. Now the game arrives on Wii U as Mutant Mudds Deluxe, having achieved its “perfect form.”

In my original original review, I praised Mutant Mudds for its singular focus of delivering rock-solid platforming without any unecessary fluff. Those who disregard it because it doesn’t “push the envelope” are sadly missing the point of its simple purity. If a game is going to do one thing and one thing only, it better do it well — and Mutant Mudds does it very well.

If you’ve already played Mutant Mudds before, I doubt there’s enough fresh content in Deluxe to warrant an additional playthrough. However, if you’ve never taken the plunge, the new levels and other subtle tweaks make Deluxe the definitive experience. 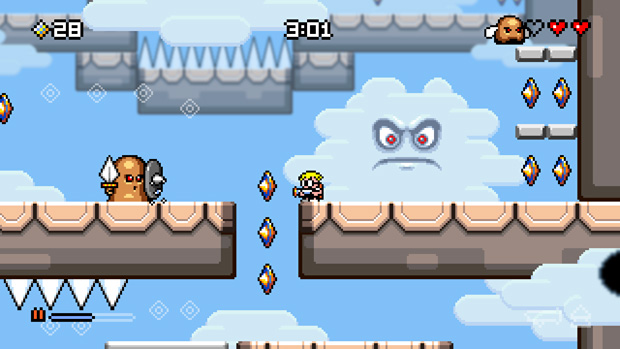 Once more, you assume the role of Max, a young boy with a water cannon and jet pack combo who must rid the planet of the vile alien Mudds. As you hop from platform to platform and between the fore, middle, and background planes akin to Wario Land on Virtual Boy, you must also collect diamonds to purchase equipment upgrades. Using these upgrades, you can then return to the 20 main levels and seek out hidden doors leading to 20 tougher stages.

Everything I said in my original review regarding the core game holds true in Deluxe, from the masterful level design to the pleasant chiptune soundtrack. But thanks to all the new tweaks and additions, the package is even better than before.

The most noticeable change from its predecessors is the much wider view of the landscape. Mutant Mudds never had a habit of surprising players with unavoidable off-screen obstacles, although there might have been one or two blind jumps. But with this pulled-back camera, you have even more opportunity to react to oncoming dangers — blind jumps are no longer a concern.

You can use the GamePad for off-TV play, but in an unusual twist, the view isn’t 100% identical to what appears on the television. It instead presents a zoomed-in view similar to that of the 3DS version, only with a slightly expanded horizontal view thanks to the GamePad’s widescreen aspect ratio. This caught me off guard at first, but it comes in handy whenever Max is running along the background plane. Popping your head down to glance at the GamePad is like looking through a pair of binoculars, allowing for improved precision platforming.

Introduced in the PC version of Mutant Mudds were 20 new “CGA-Land” bonus levels, named for the old-school IBM graphical color scheme. An update brought these levels to the 3DS, and they resurface once more in Deluxe. They are accessible from the main stages only after you’ve unlocked the Grannie character, who is able to simultaneously use all three item upgrades — a powered-up shot, extended jet pack hover time, and a super rocket jump. And you will need to use all these abilities in perfect sync if you wish to navigate these spike-laden death mazes. 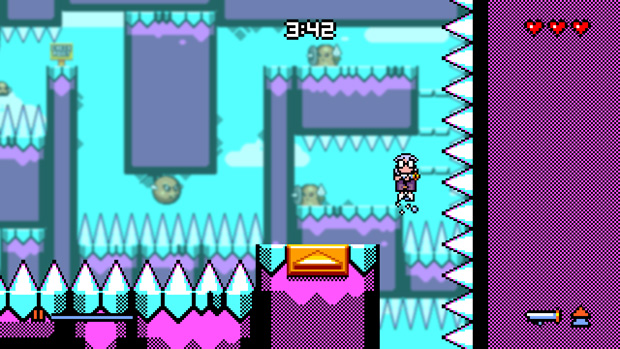 The 3DS and PC games lacked checkpoints, so levels had to be cleared in one straight shot. While the levels aren’t so long that you would lose a significant amount of progress should you die, later levels become extremely frustrating without a safety net. The iOS port planted checkpoint signs in all the levels, and they appear in Deluxe as well. You can toggle checkpoints from the main level select hub for a more hardcore expedition, however. You don’t receive any special bonus for clearing a stage unassisted, just your own twisted satisfaction.

Exclusive to Deluxe are 20 “ghost” levels, bringing the total stage count to 80. By passing through the mirror in the stage select hub, you can tackle remixed versions of any main stage currently open. In these levels, you’ll encounter spectral versions of familiar Mudds as well as new enemies, none of which you can damage with your standard weapon. Instead, you’ll need to track down a ghost gun power-up that contains 10 rounds — these shots won’t kill enemies, rather they will temporarily dissipate them and allow you to run past safely.

Since you typically can’t harm ghost Mudds, levels have been constructed around this element. You have to time your jumps and hovers to avoid marching baddies, and you sometimes have to jump to a separate plane and jump back to maneuver around walls of flying specters. Merely by eliminating your ability to kill, the game takes on an entirely new dimension, forcing you to play defensively rather than offensively. It’s a fitting final ordeal for a game that has otherwise done nothing major to challenge expectations. 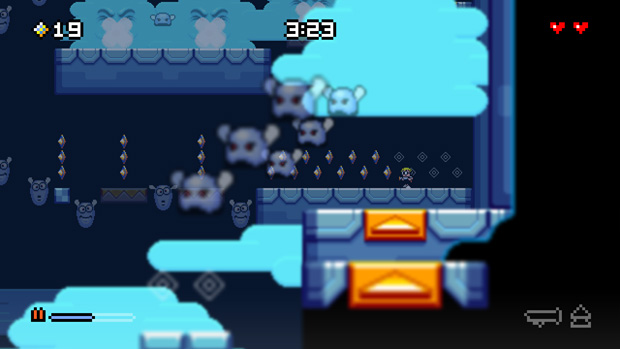 But having played through Mutant Mudds three times before, I’m not sure these additions warrant a revisit. I mean, if the CGA-Land stages were brought to the 3DS original via update, what’s stopping the ghost levels from likewise appearing as a free 3DS update later down the line? What would be incentive for a home console version then other than the larger screen real estate? Furthermore, the depth-of-field effect that replaces the stereoscopic 3D simply lacks the same punch. This was a game built for the 3DS, after all, so some loss in translation was to be expected.

Don’t take this as a slight against Mutant Mudds Deluxe, which is definitely the most complete Mutant Mudds yet — until the next more complete version arrives, that is. Mutant Mudds has served its purpose as an unapologetic retro celebration, but at this point, I’m ready for Renegade Kid to build upon this foundation and pursue something truly original.