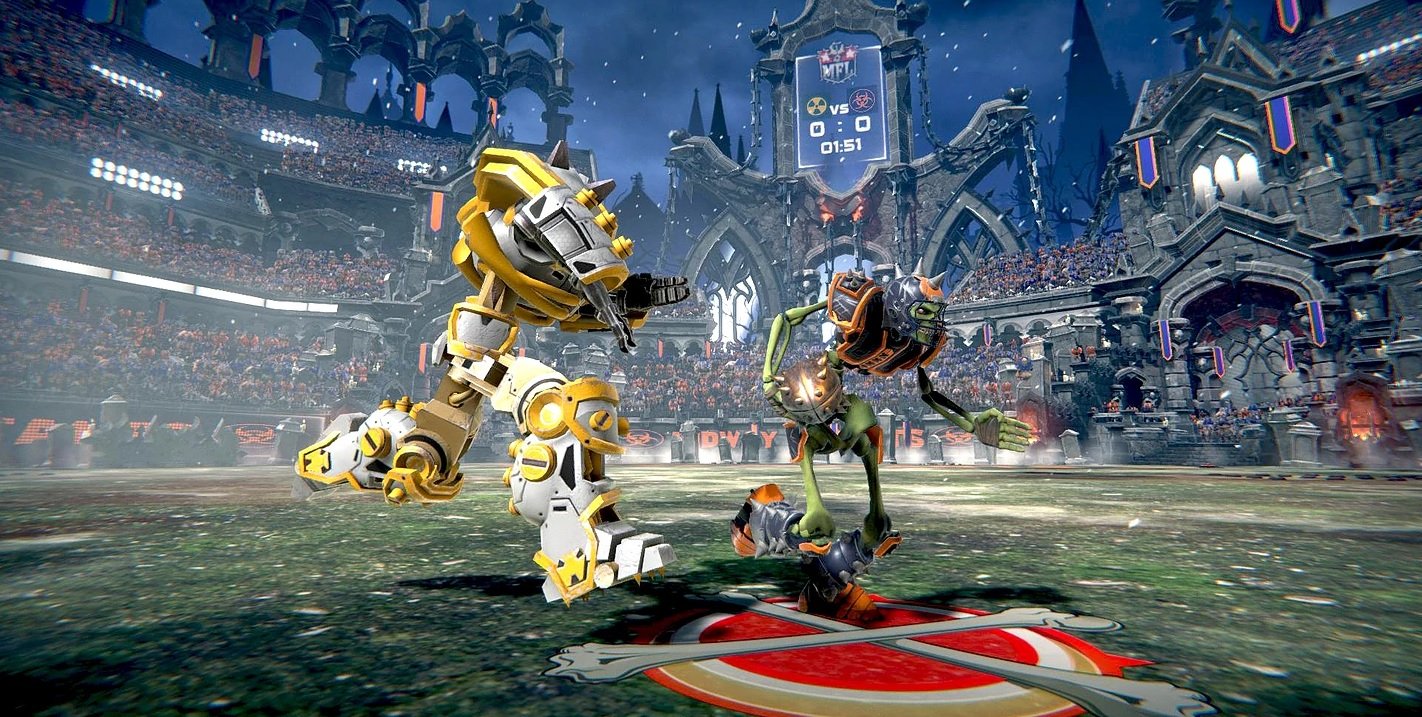 All this talk about “sportsball” on Twitter during the Super Bowl sort of eluded me. Yes, I get it; gamers and geek culture are not generally associated with being sports fans. I can’t even properly say I am one myself. I didn’t watch the Super Bowl this year, or last, and I don’t really follow teams, but that has a lot more to do with the way I take in entertainment. I don’t watch TV very often in general. It’s like pulling teeth to get me to watch a movie. But unquestionably, my favorite organized sport is football, and I am not a stranger to football video games.

Now I’ll be clear here: I am referring specifically to arcade-style football. I have never been able to fully understand or appreciate the nuance of the Madden series (except in very early iterations) or other more serious football simulations. The idea of sitting through hours of tutorials and having to remember fifty different button commands to stand a chance at fighting my way through a season is arduous for me. But the these days, the options seem more limited than ever. Madden has practically monopolized the sport at this point, NFL Blitz is nowhere to be found, so if you want a decent game of football, you are practically forced to suck at the teat of EA and deal with everything that comes with it.

So it’s really nice to see an option come seemingly out of left field (because sports haha) in Mutant Football League. Not only is it a welcome addition to a genre that is sorely lacking in variation, but it’s a revival of a fun 16-bit franchise, the Mutant League sports series, that I remember pretty fondly from my childhood. It has a few kinks and imperfections which I will get into, but I was able to look past them quickly and enjoy the base game for what it is: simple, straightforward arcade football.

With punching and blood and explosions and mayhem.

The big appeal of Mutant League Football on the Sega Genesis and Super Nintendo was the Troma-esque fixation on absurd cartoon violence and toilet humor. The Beavis and Butthead ’90s antics don’t hold up quite as well today; most of the humor, especially in the audio commentary, fell completely flat for me, eliciting little more than the odd amused grunt, but I was never compelled to turn it off completely. You almost had to have it of course; a modern football game without any attempt at commentary would have felt strange and incomplete, but the real draw of MFL is the hard-hitting violence, the loose adherence to traditional rules, and naturally, the numerous deaths of on-field players as they run head first into saw traps, get eaten by carnivorous worms, and most frequently, are beaten to death during and at the end of a play by the opposing team.

There are of course penalties in place to prevent things from becoming stupid; you have a limited window of time to inflict damage on players with punches, kicks, and body slams before a play is called, and a death after that will result in a penalty and lost yards. Whittling away players’ health will slow them down and make them less efficient, but there is a fine line, one that is often crossed by the A.I. — nine times out of ten, it was the computer-controlled players on my team that would incur a penalty by murdering other players, even when I was being careful not to pass that threshold. A minor annoyance, and one that never really adversely affected the outcome of the game for me; on the default difficulty setting, I found it quite easy to plow through my opponents most of the time even when they were pulling trick after dirty trick on me, though this is adjustable for a much tougher experience.

Dirty Tricks are tactics you can employ a limited number of times per game to grant you a clear advantage on the field. Worried the opposing team is about to get a touchdown? Bribe the ref and have them call unfair penalties whenever they do until the ref is murdered and replaced by another. Players dying left and right? Win the half-time minigame, a Smash TV type top-down shooter which is so sloppy and horribly unfun that it makes the irritating mini-games in Yooka-Laylee look like Celeste, and you will have an opportunity to resurrect a teammate. There are a number of modified running and pass plays such as Shotgun and Roid Rage that beef up your team and usually lead to a ton of yards gained, and can vastly affect the outcome of the game.

Personally, I found them fun additions, but I could go either way — I’m happy with the simplicity of the regular ruleset, and didn’t find myself using them unless it was necessary to counter one the opposing team had employed. They can be disabled in the game options if you find them obnoxious and want a more even-handed football experience.

I have a couple of gripes. Apart from the rough-around-the-edges presentation, lack of worthwhile music (and presence of annoying jingle music every time you have to select a play which prompted me to disable the tunes altogether) and laughable, choppy performance when playing the half-time minigame, I was unable to find an online match to play — ever. There just seems to be little demand among the fanbase for online play. In addition, there is nothing exceptional about any of the modes. You can play a regular match, a pre-season match, or a playoff match, play through a whole season, and that’s about it. Mutant Football League, especially played at the fastest game setting (which I recommend) would feel right at home in an arcade and isn’t ashamed of it. 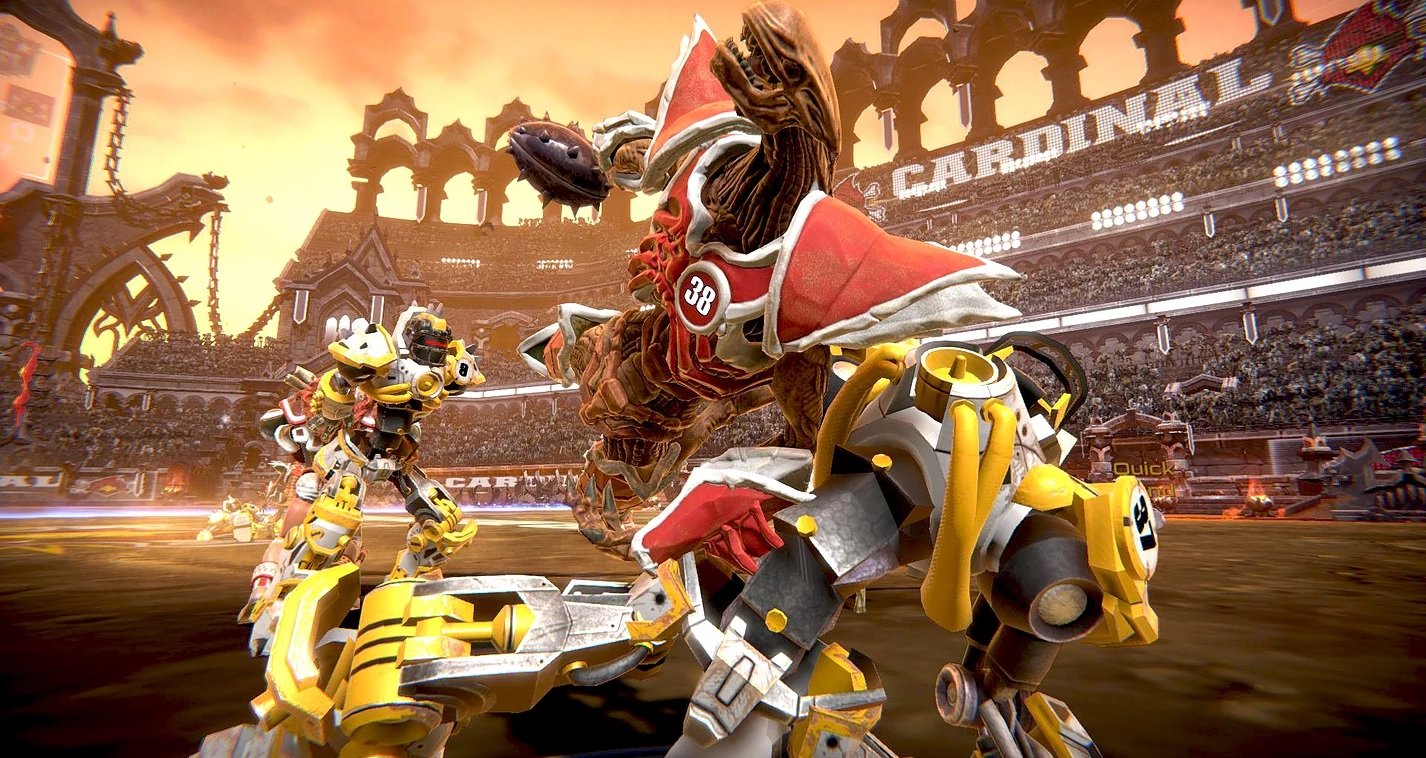 I’ll admit, NFL Blitz and Tecmo Super Bowl are always going to be my favorite football games. Though the gore and fatalities here are neat, I didn’t find that they began to approach the hard-hitting feeling of impact that the Blitz series was so well loved for. Even though that game didn’t have players getting gored by monsters or punched to pieces, it felt more hardcore overall with heavy, bone-crushing hits. Here, many of the big hits feel like a whimper when paired up to somewhat low-key sound effects. I can’t quite put my finger on it, but something is a little off — what should be devastating moments don’t pack the level of punch I was hoping for, and in a game where that is one of the selling points, that disappointed me a little.

Really though, this is a pretty strong throwback to an overlooked series. The demented team names, ghoulish character designs (orcs 4 life), traps, tricks, and violence make for a fun arcade package. Even the flaws and unpolished nature of the game seem like an apt follow-up to the original in some ways, although there are a few missteps in the final product that could have probably been cleaned up.

For what was initially a failed Kickstarter by the series’ original creator to make it to a final release like this is impressive in its own right, and it is one of the few arcade-centric football experiences currently on the market. Mutant Football League is fast, dirty fun, and definitely one of my favorite sports games in recent years.