When NFL Blitz first hit the scene some 20 years ago, my young mind was blown away by the sheer over-the-top violence the game featured. Sure, this was a time when the NFL itself embraced this culture of hard-hitting brutality, but the game really just took the ball and ran with it. It was madness. It kept just enough of the rules of football and turned them upside down to make the game familiar but zany. In short, it was a controlled form of chaos that distilled the spirit of the sport into an arcadey and vicious package.

Mutant Football League is a successor in spirit if not name. The violence and mayhem remain with some extra bells and whistles thrown in to make the package a bit more robust, but something ultimately just feels missing. 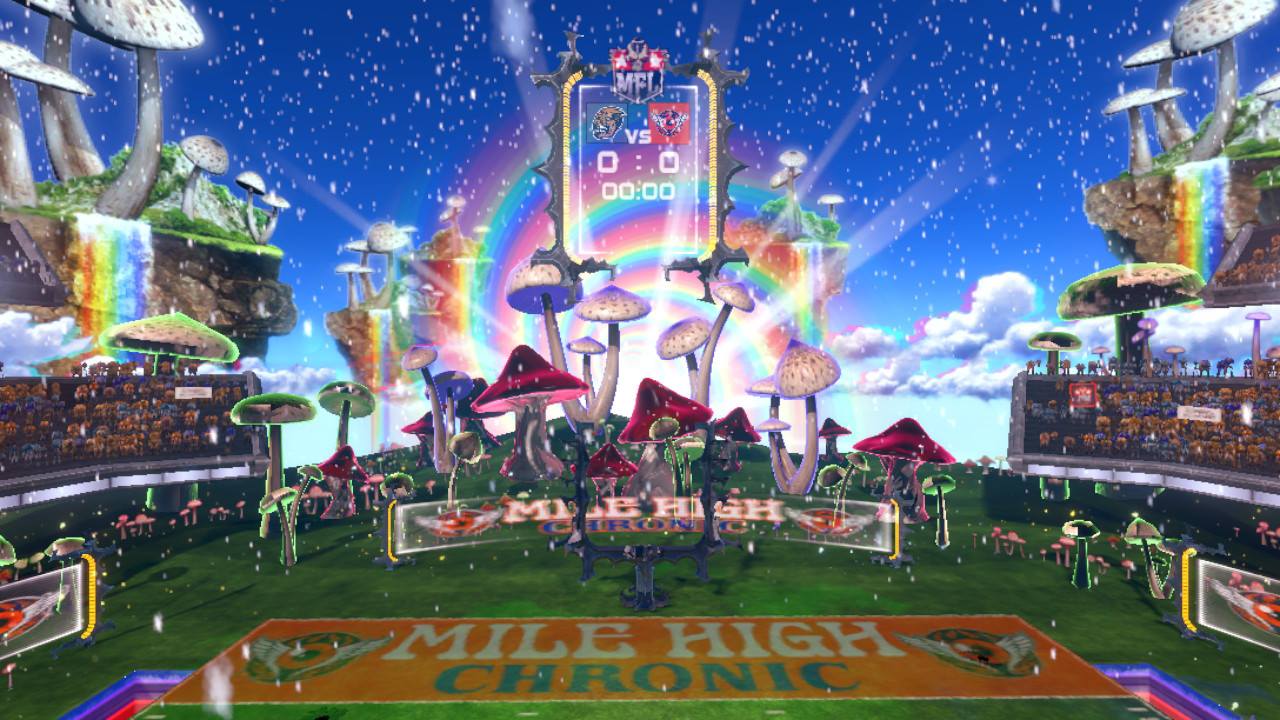 Mutant Football League: Dynasty Edition is a repackaging of the base game featuring all the DLC, and also marks the franchise’s first appearance on Switch. If you’re familiar at all with football I won’t have to describe the gameplay much — you run, throw, and defend like you would in a normal game, the catch here being everything is more extreme. Hits are harder, moves are more flashy, and you can attack players between plays to whittle down their health, eventually killing them.

There’s also a gameplay feature called Dirty Tricks, where you can leverage cheats in order to gain a competitive edge. You can bribe the ref to ensure the opposing team gets a bad penalty (typically after touchdowns to negate them), throw a pass that literally cuts right through defenders, enhance your running back to become virtually unstoppable for a good 30 yards, and more. You can turn these features off (or just ignore them entirely) to have a slightly more traditional experience, but in certain game modes, they’re more-or-less necessary in order to win. They’re cool to see the first couple of times, but honestly ring a bit hollow and feel too gimmicky to really ever resonate with the actual gameplay.

To the point of the gameplay, it’s here where I feel most disappointed in the game. Blitz was a shallow experience, for sure, but everything came together to just work out in a satisfying way. The violence was super satisfying in large part to the spectacle of the whole thing; hits landed with a gratifying crunch, and the suplexes and straight-up maimings that served as tackles were well-animated and flashy. Here, you have essentially the same exact game, mechanically, but nothing quite nails to landing. Hits don’t have enough oomph to really stand out, and tackles are pretty tame in comparison — to the point that most could serve as tackles in a Madden game. For something that brandishes its violence as a selling point, it’s really not all that violent.

And playing the actual game feels rote at times, perfunctory even. You have a limited turbo that can be activated once during the play (and doesn’t refill like in Blitz) and some moves while running, but that’s about it. You have three receivers mapped to the left, top, and right face buttons, and that’s about it. And on defense, you can jump in the way of a pass and tackle…and that’s about it. Nothing about the fundamentals of the sport is changed to a degree to make the gameplay stand out in any discernible way, which is only compounded by the disappointing nature of the violence. It results in an experience that isn’t boring, per se, but isn’t by any means exciting. 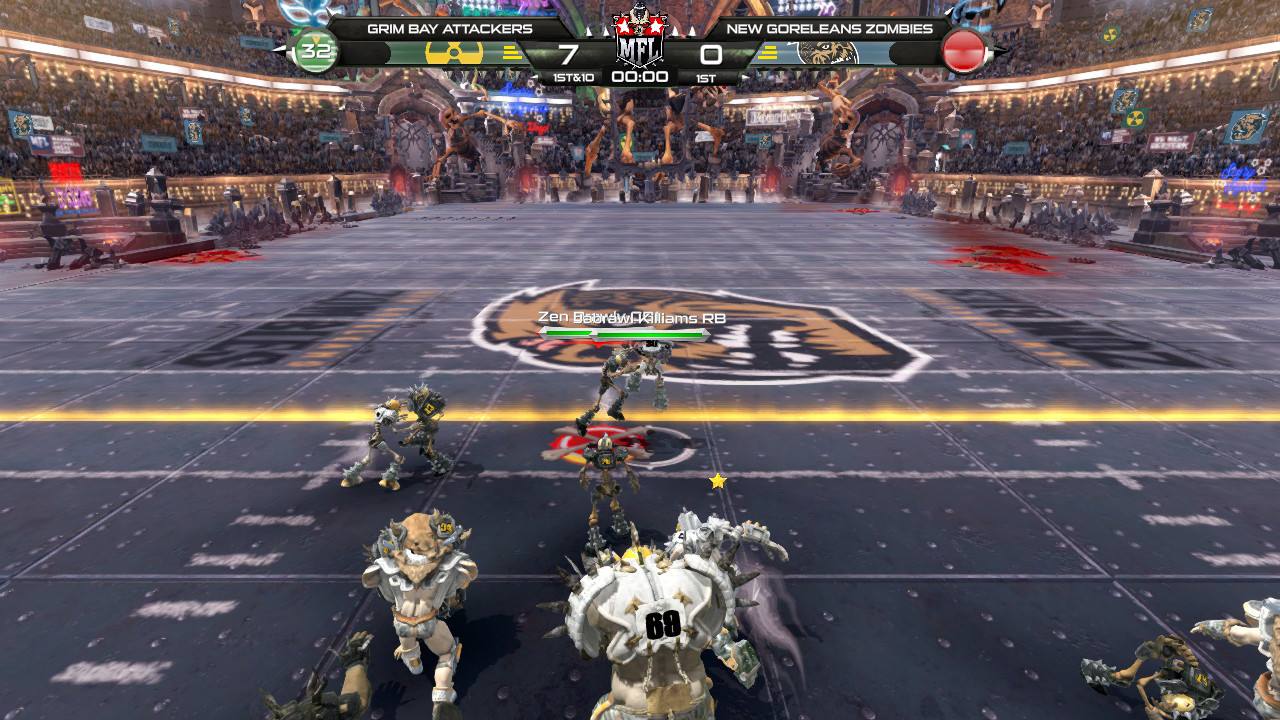 I spent most of my time for review purposes in Franchise Mode, one of the DLC pieces added into this package in its re-release. If you’ve ever played any franchise mode in a sports game, it’ll feel mostly familiar here. You can trade players, pick up free agents, play through multiple seasons — it’s all here in more or less working order. Individual players have season goals in order to gain experience and level up, and you as a manager have the same.

The biggest problem here is that you start out at a hilariously low level as a team. I started out using the New Goreleans Zombies because I wanted to use their high-powered offense to kick back and have some fun. The team’s base rating in other modes is an 84, but in Franchise Mode you start at 48. The other teams in the league retain their regular rating. This makes the early days of the mode an absolute slog as you get your ass handed to you by even the worst teams in the league until you understand how to cheat the system.

Remember earlier how I mentioned Dirty Tricks? Understanding how they work and when to use them is a necessity in order to win these early matchups. It took me about six games to fully understand the system (as there’s no proper tutorial to explain the ins and outs of it) and finally start winning games. It’s fine, I guess, but the only way to earn money and new plays for your franchise is to win games. You’ve got a budget and operating the team each week (including resurrecting your starters which are basically guaranteed to die each week) takes away from that; run out of money and it’s game over. Having Dirty Tricks to use in a pinch is one thing; having to use them just to win with your team that had its ratings cut in half for no apparent reason just feels like bad design. Quickplay modes, of course, don’t have this problem, but it really feels like Franchise Mode (which again, came as DLC for the base game) is the bulk of the content. Again, this results in an experience that isn’t really all that fun for long periods of time. 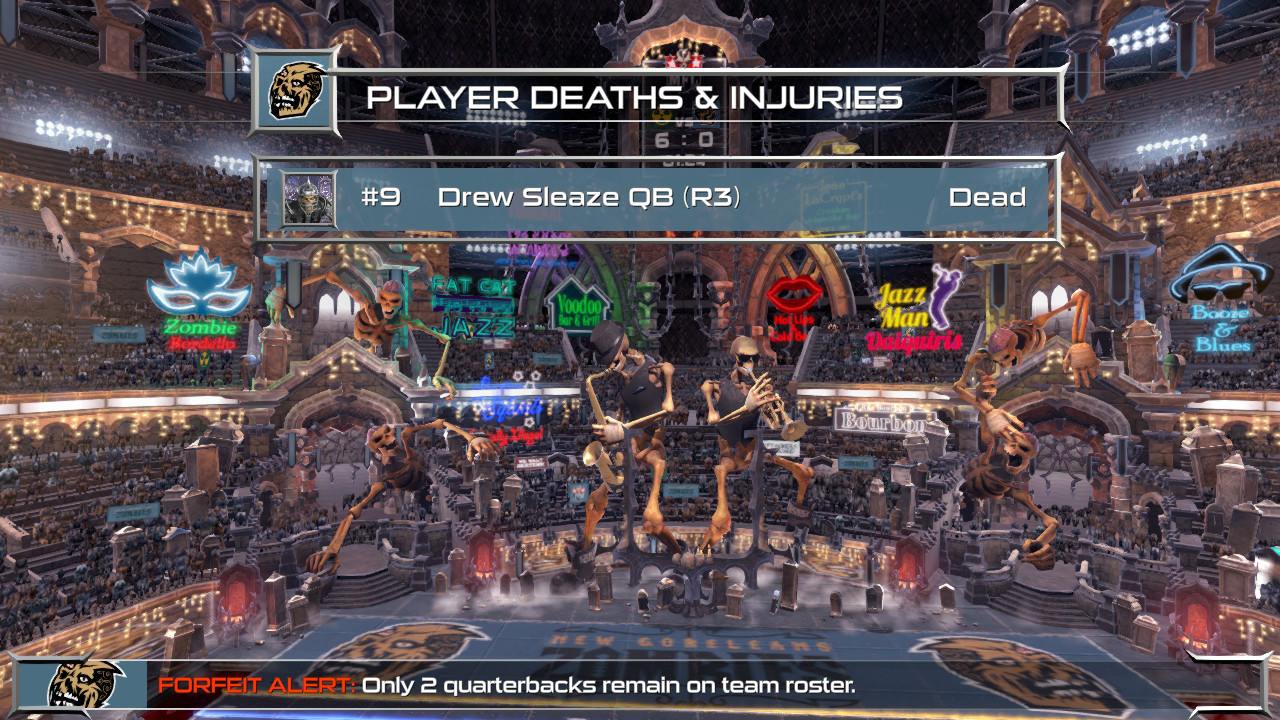 The aesthetics are really what drew me to the game. I’m a sucker for horror-themed stuff, so the idea of running around as skeletons and killer robots in wacky monster worlds really appealed to me, so that part was fun, at least. There’s really no difference between any of the different races apart from their looks, but it’s still fun being a werewolf running back running through an offensive line of orcs. And the humor definitely isn’t for everyone, but again I’m a sucker for puns. Throwing passes from Drew Sleaze to Alvin Kilmora against the likes of the Malice Hellboys and Scarolina Panzers is right up my alley, and it’s always fun trying to guess what real players names they spoofed to come up with their monster names.

The commentary is going to be equally divisive in terms of humor. The original NBA Jam and NFL Blitz commentator Tim Kitzrow provides play-by-play in his usual fashion, which for me was a nice treat. His tongue-in-cheek sarcasm really shines here, plus he says fuck from time to time which is pretty funny to hear considering I’ve always heard him commenting on much more family-friendly titles. The color commentator, however, is borderline obnoxious. The two have a decent back and forth at times, but man, the second voice is just shrill and largely annoying. Some jokes will land, and some won’t, but that’s really to be expected any time comedy is involved. 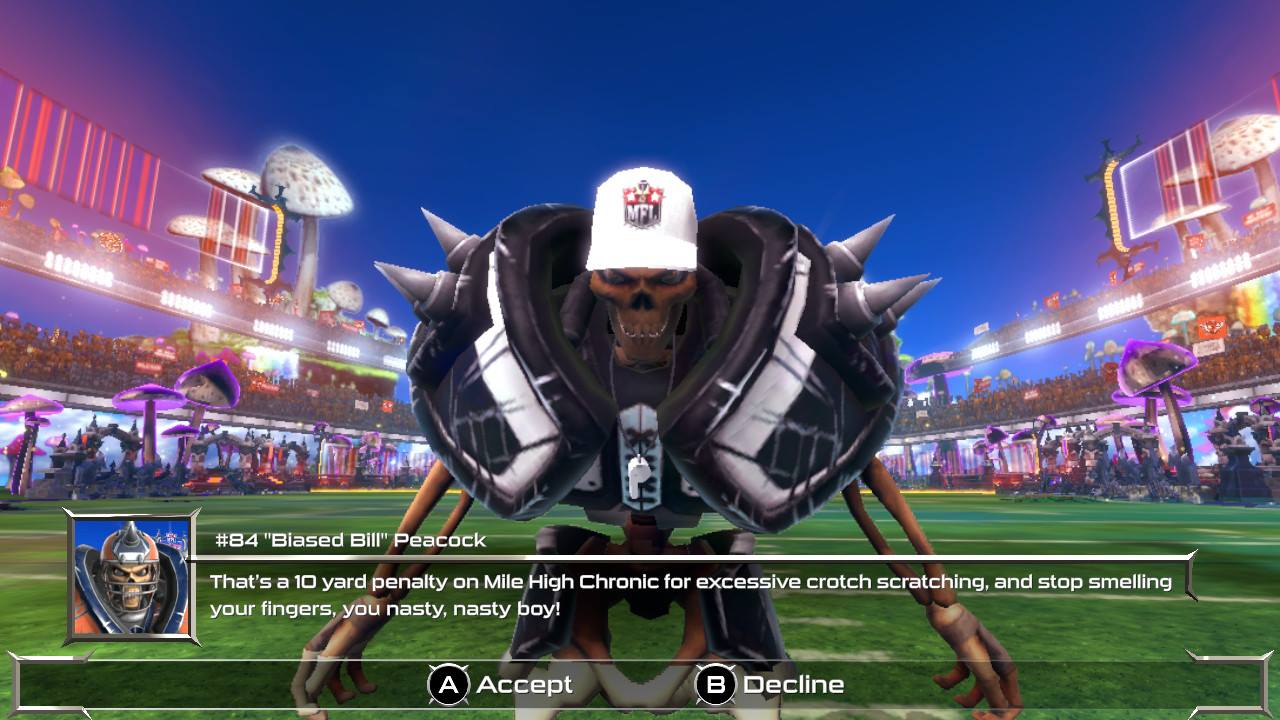 Overall, it just feels like there are a lot of missed opportunities in Mutant Football League: Dynasty Edition. The gameplay certainly works, but there’s really nothing all that spectacular about it. The violence is there, but it just feels tame even in comparison to a bloodless 20-year-old competitor. The game modes are all genre-standard, but there’s really nothing to separate it from a normal sports game. The aesthetics are cool, but there really aren’t any differences between players and races apart from cosmetics. It’s punny, but not really all that funny. It’s a game that’s ultimately dragged down by too many buts to really stand out and make a name for itself.