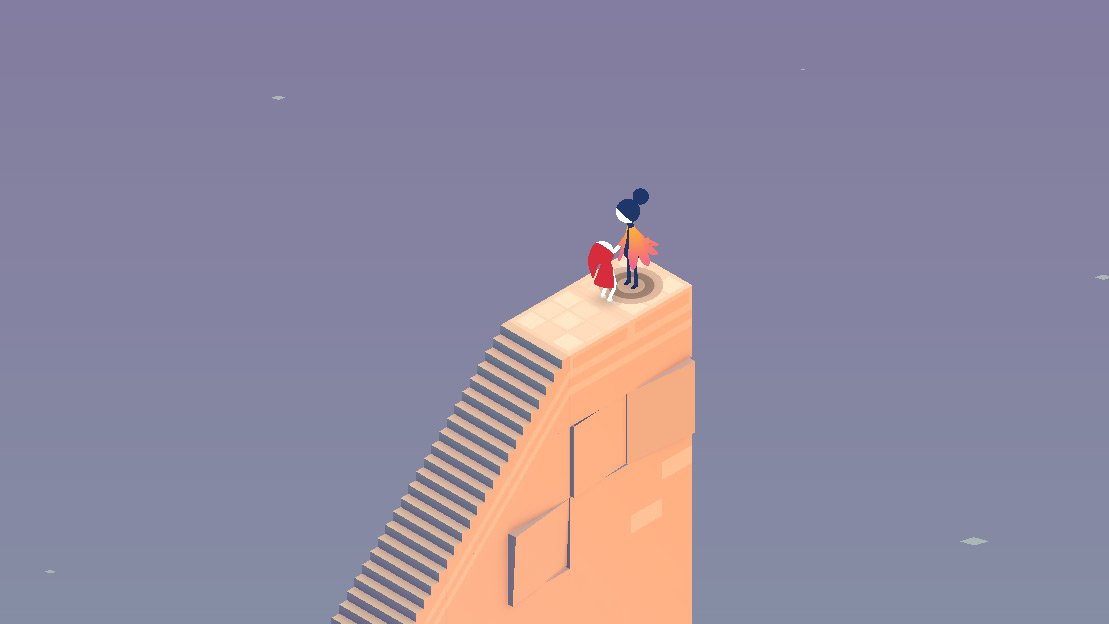 The original Monument Valley didn’t grace my iPhone until after I saw the President of the United States play it. That is, of course, President Frank Underwood from Netflix’s House of Cards. Following its appearance on the show, I downloaded the game and 35 minutes later, with the last chapter complete, I was left wanting more.

More is here with Monument Valley 2, and once again it simply isn’t enough to satiate the appetite it creates in me.

Sitting alone on an impossible object, the faceless Ro plays a delightful melody on her wooden flute. When I touch the screen, her song ends. A twist of a mechanism creates a path, and with one more touch, she begins a quest she has taken once before. Through the sacred geometry, she must guide her daughter along, testing her and preparing them both for the next stages of their lives. The unnamed daughter is carefree. She gleefully skips behind her dutiful mother. When the two are separated by chance, their reunion moments later displays the love the two have between them, instilling in me just how impactful this journey will be.

It’s a sparse story, this tale of mother and daughter, but unlike its predecessor, Monument Valley 2 chooses to tell it in a more straightforward manner. This is a fable of two women fulfilling a purpose, one that becomes clearer as I progress from one imaginative stage to the next.

The game takes a while to set itself apart from the last one, and it isn’t until the duo separate that I start to see some truly breathtaking scenery. Architecture inspired by the Moops Moors and Islam sets up the silent world before giving way to more striking landscapes and abstract ideas similar to those found in the works of Kazimir Malevich. Each frame of this game is a magnificent work of art that can be effortless or devious in its design, depending on how I am manipulating the puzzle.

Being familiar with Monument Valley, puzzle solutions here are as straightforward as before with switches strewn about that clearly guide me along each impossible structure. There are instruments I use to maneuver the stage, creating walkways that shouldn’t be real but are in Monument Valley. Each puzzle is a single screen, and Ro and her daughter are snappy in their reaction to my touches of the iPad screen. Successfully guiding them through each chapter is a matter of when and not if. This game, like its forbearer, limits its potential challenge by only featuring a few mechanisms to shape the world in each puzzle and solutions take only a moment to find.

But the designs of Monument Valley‘s puzzles were never meant to be difficult. These single screen labyrinths aren’t supposed to break my brain, but rather prove to me just how clever the level designers at ustwo games are. Each twisting, turning puzzle is not a race but a victory lap, a celebration of a complex idea presented in a simple manner. I smile and slap my forehead as a slight twist of a nob constructs a pathway moments earlier I thought impossible. Of course the point Monument Valley 2 is doing just that, to make the impossible, possible.

It’s easy to credit the inspiration for this series to MC Escher, who as you know is “Weird” Al Yankovic’s favorite MC. The artist played with our perceptions, creating magnificent if entirely inconceivable works of art such as “Ascending and Descending,” “Waterfall” and the oft-imitated “Relativity.” Predating those masterpieces is Oscar Reutersvard, who in 1934 created an impossible triangle. Years later, a modification of that design would be introduced by Roger and Lionel Penrose, who would also create the Penrose stairs. Then there is the impossible trident, perhaps most famous from its appearance on the cover of MAD magazine.

I mention these artists and these objects because, throughout Monument Valley 2, all of them are utilized or referenced in some shape or form. While the game has a style all its own, its existence is built on the backs of those visionaries who sought to challenge and confuse viewers with easily recognizable objects that upon closer inspection make no sense at all. Monument Valley 2 has its fair share of visual trickery that leaves me slack-jawed, reaching a crescendo midway through with Mèn-An-Tol. Here, a chase through the past takes the gravity-defying design and mends it with an infinite zoom, creating a hypnotizing, though dizzying at high speed, effect similar to that found in The White Stripes’ “Seven Nation Army” music video.

Hypnotizing is perhaps the most fitting word to use when trying to describe this game. Through the hour or so it took me to reach its magnificent conclusion, I was enraptured by everything I saw and heard. The puzzle design is two-steps above from the previous title, the visuals more complex and multifarious. New concepts like transformative sunlight and two characters solutions make impactful, but wistfully fleeting impressions.

As with Monument Valley, which, in its brevity, kept me in a haze for a fortnight after I finally set it down, Monument Valley 2 lingers in my mind. Its cursory existence has me craving more and I can’t help but feel a ting of disappointment that this is all there is. It’s a beautifully brief journey, but ustwo’s reluctance to fully explore its possibilities only hampers its potential.