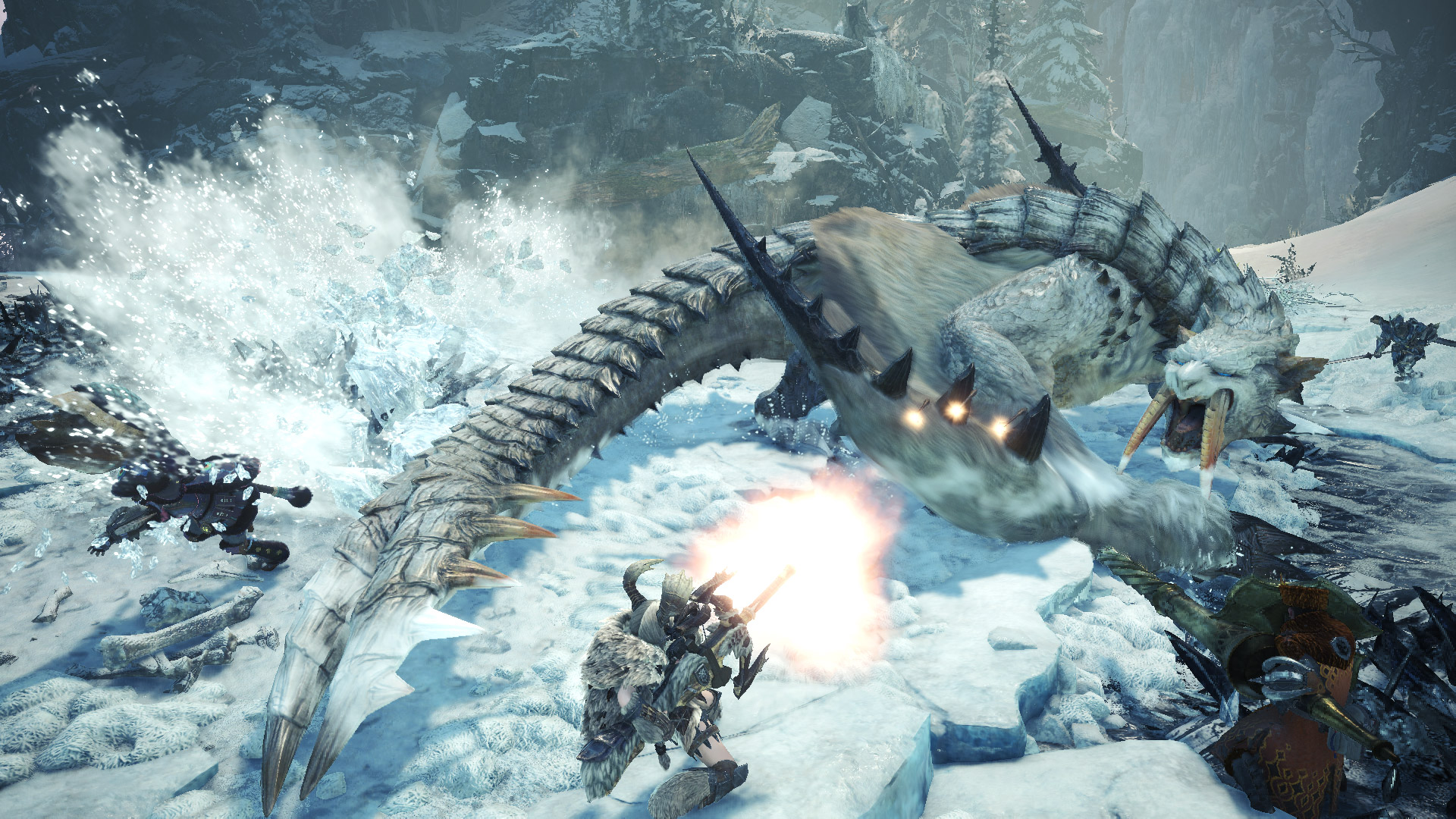 Welcome to the big leagues

With Monster Hunter: World last year, the adrenaline-pumping series finally managed to break through for me, and – given what a colossal sales success the game has become for Capcom – plenty of other would-be players. It’s not the easiest thing to figure out as a first-timer, but World‘s upgrades, tweaks, and sanded-off edges coalesced into a fresh experience that tapped into an eager new audience.

I was woefully hooked on the game at launch, tried my best to keep up with the content updates in the months that followed, and eventually fell off when it came time to grind out battles against beefy-as-hell Arch Tempered beasts. Some people can stick with the Monster Hunter format for thousands of hours, and more power to them – I was fine saying farewell after 130 hours. Or so I thought.

Iceborne, the fierce new expansion that brings the equivalent of G Rank, has thrust Monster Hunter: World back into my life, tipping my save file over the 200-hour mark. Please send help. I can’t stop.

Straight up, if you’re thinking of casually dipping back in for Iceborne, you need to know what you’re getting yourself into. It’s an expansion through and through, and that means a marked increase in difficulty with a new set of challenges (and accompanying story) designated as Master Rank.

In fact, the frigid new narrative can’t even properly get underway until you’ve cleared the base game up through Hunter Rank 16 – an important distinction for players who are just now starting World with the complete all-in-one bundle. Really though, that caveat is for your own good. Iceborne wastes no time at all establishing the next overarching questline in the snow-bound land of Hoarfrost Reach and testing your monster-slaying fundamentals. Master Rank will remind you what it’s like to take on fights in which every armor piece, skill, and craftable item matters. I felt constant pressure to fine-tune bespoke builds to give myself that extra edge, something I can’t say I ran into nearly as often in High Rank.

Iceborne‘s story is a direct continuation of what we saw in World, albeit with improved pacing and slightly more motivation to care about your jovial band of cohorts. An icy elder dragon named Velkhana threatens to break the ecosystem, prompting the Research Commission to set up a new base. From there, you’re off! The new zone (Hoarfrost) and secondary home (Seliana) join the existing world map, meaning you can bounce around familiar sights as needed. You can even still use the original base (Astera), but you won’t want to – Seliana is vastly more efficient. Everything – from Tailrider management to researcher NPCs to the Smithy and Canteen – is within reach. No more lifts!

This may or may not come as a surprise, but a decent chunk of Iceborne actually takes place within existing zones like the Ancient Forest and Coral Highlands. That goes for the 20+ Assigned Quests and over 70 Optional Quests I’ve encountered so far. The expansion isn’t strictly about snow.

In some ways, that’s great – it can be wild seeing the new-to-World monsters pop up in your old stomping grounds. Monster Hunter thrives on spectacle, and that goes double for turf wars. But other times, repetition puts a real damper on things. There were a few pulse-pounding encounters in Iceborne that felt like they could have been straight out of a sequel, not an expansion – side note: Capcom knocked it out of the park with Velkhana as a recurring threat – but it’s not long before reality creeps in again. This also factors into the monster selection, which I’ll try not to spoil any more than needed.

Basically, you can expect 20-something monsters (I’m trying to be vague here!), and there’s a fairly clean split between foes hailing from prior games (like Brachydios and Nargacuga) and beasts from World that now have unfamiliar subspecies (like Viper Tobi-Kadachi and Fulgur Anjanath).

The latter monsters aren’t mere reskins – they can have far different moves, behaviors, and strengths/weaknesses to learn. I found a couple of them underwhelming, but otherwise, these variants feel worthwhile. Iceborne also isn’t afraid to throw Master Rank versions of the rest of the base-game roster your way, especially when it comes to undertaking Optional Quests and Expeditions.

Are there any never-before-seen monsters? Yes. That’s all I’m going to say, and hopefully you aren’t spoiled by random videos that tend to surface in YouTube recommendations. One creature, Namielle, should go down as an instant classic, from choreography to design and everything in between.

There are so many little details in Iceborne I wish I could cover in greater depth, but I only have your attention for so long, and honestly, much of that minutia is better left to wikis over the coming weeks.

I’ll say this much, though: there’s no shortage of cool new armor sets to painstakingly grind for and deck out with stat- and ability-boosting gear. The grind is as enticing as ever. The weapons, while all the same, have picked up some subtle tricks. It’s also crazy how much more flexibility we have in combat thanks to Iceborne‘s Clutch Claw and Slinger enhancements. You won’t know how you lived without ’em. Building up volatile energy in my Switch Axe and repeatedly grappling onto a monster’s tail to fire off back-to-back explosive discharges is my new go-to. Brazen moves like that can be super risky – so much of Monster Hunter is knowing you and your prey’s precise limits – but the payoff is incredible.

One of my bigger issues with World was the eventual tedium that set in with having to navigate sprawling environments. There was some definite give-and-take, particularly with the vertical-oriented zones. I feel like Iceborne addresses this, both in Hoarfrost Reach’s layout and also Raider Rides – the ability to hitch a ride on small monsters who can quickly get you where you need to go, even while you’re busy reading the map. A lot of minor conveniences and niceties like that add up in Iceborne.

Capcom also faced criticisms over World‘s endgame content, or relative lack thereof. Without going into specifics, I don’t think that’s going to be a problem again. By the time you reach the credits, you won’t have seen everything – not by a longshot. Iceborne‘s endgame is a substantial step up. It plays directly into Monster Hunter‘s greatest strengths and serves as a satisfying, addicting, and crucially rewarding co-op hangout spot. I’m finding it tough to break away to mop up my remaining Optional Quests.

That’s what it comes down to, really. These days, there aren’t many games I’m willing to surrender hundreds of hours of free time to, but somehow, some way, Monster Hunter found an opening. World laid the groundwork, and now Iceborne is here to carry me through the rest of 2019 and beyond. Mentally, I’m not even ready to start thinking about Capcom’s post-launch plans for the expansion.

You can just tell the developers had a ball working on Iceborne – it shows. And it’s infectious.