Batter? I hardly even know her!

I was ready for last year’s The Show to be its PS3 swansong, I was feeling it. It’s not that it wasn’t good. It was as good as it ever was. But there were signs of age. The same old horrifying fan models in the stands with crooked limbs and dead faces. The same bone dry commentators. It felt like the right time for The Show to be transitioning to PS4.

But this is sports, or at least sports games. When is the last time someone went out while they were ahead in sports? But hey, if the Red Sox can give David Ortiz — a designated hitter in 2014; an endangered species – a $16 million contract extension for what he’s meant to Boston over the last 12 years, I can give The Show on PS3 another ride for being the only good baseball series. Especially since the PS4 versions isn’t even out yet.

I mean, I owe the Giants’ first World Series to a platoon of antiquated weirdo journeymen and a weirder, sappier story than Space Cowboys. This isn’t just “another year, another Show,” either. This is a franchise in clear transition to the next generation, which has benefited the current generation. 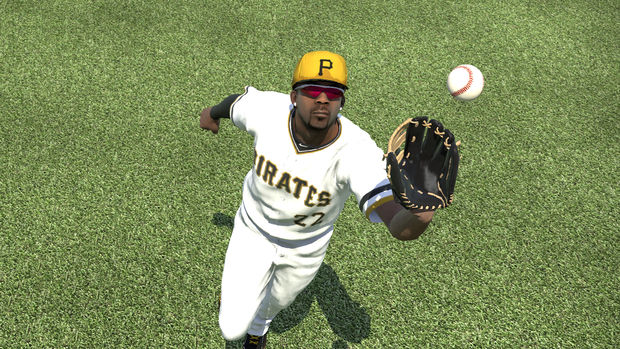 If last year’s Show was tuned to excessive hitting, this year’s feels a bit better. Though you have all the sliders and settings you can adjust, you’re asked off the bat (haha) if you want to play as a “beginner” or “experienced,” the latter of which is neatly tuned and adapts on the fly (separate for hitting and pitching). I could explode for eight runs of offense, sure, but I could also find myself struggling to put up a run. Last year I felt way too powerful. Especially with the Giants’ weaker offense. I was hitting above .350 with multiple hitters. This feels better.

A lot of things this year feel better and more holistic. The UI has been overhauled to a tiled style menu, each large tile displaying relevant contents when your cursor is over it. It’s a great way to lump the many different modes. The improved UI is especially appreciated in Road to the Show, My power and contact deficient, speedy short stop (#69) was much easier to put together and manage. I also liked starting with a player who was maxed out in some stats (arm strength, speed) rather than average in all of them. Playing a speedster and defensive maven made every at bat hard fought and valuable (get on base any way you can, try to steal) and every defensive opportunity a chance to make up for a lack of home runs.

Road to the Show has also extended some part of itself into other modes of play with Player Lock, which allows you to play through whole games in other modes just as one player (you can unlock or change player at any time through the start menu). If you just feel like pitching or want a couple bats per game, it might prove useful, especially if you want to avoid the guilt of straight sim-ing the occasional franchise game. Also meant to speed up games is the Quick Count, which automatically generates a count (based on the batter and pitcher) before you get control. So you can come up to the plate and be down 0-2. I liked the dynamic situation-building as a hitter, but was sort of annoyed by Quick Counts as a pitcher for some reason. Let me put myself behind 3-0, I guess.

The Show now does year-to-year saves, so you can import the franchise you slaved away on each year. Along with the cross console saves, there’s a nice bit of permanence and connectivity here that give your yearly efforts more value. Also new is the universal profile, which tracks your experience across game modes, head to head win loss records, as well as your hitting and pitching tendencies. The latter can be subbed into the new online enabled franchise (netcode is still adequate but stuttery) or Diamond Dynasty to allow you to play against a replicated individual rather than straight AI. Think Drivatars, I suppose. You can also view an opponent’s profile during online play to get a scouting report of what you’re up against. High swing percentage? Give them a few more pitches outside of the strikezone.

Community Challenges add a new wrinkle if you want a mildly acrade-y experience where you can wager in-game points and try to meet player-arranged situations. One tasked me to rob several game winning home runs at the right center field wall with Mike Trout. I lost out, but it also gave me 10 practice shots at making a well-timed jump at the wall with a fielder, which I have always been terrible at for how rarely it happens in game. Some of these challenges could be a good way to work on other skills, from fielding to going to the opposite field more.

Meanwhile, there is a Show-sponsored weekly challenge, which actually comes with a prize for the winner. The first was pure hitting with Miguel Cabrera, the prize a Cabrera-signed ball. This is as arcade-y as The Show gets and it was addictive. Sure, the leader at the time outdid my best by over two million points, but I kept playing. There is a score multiplier for good hits or takes and sounds that make me feel like I’m playing Lumines: Electronic Symphony. In hitting, you get three outs, three strikes per out. String together good hits and you score points and a multiplier, but the pitching difficulty rises commensurately. 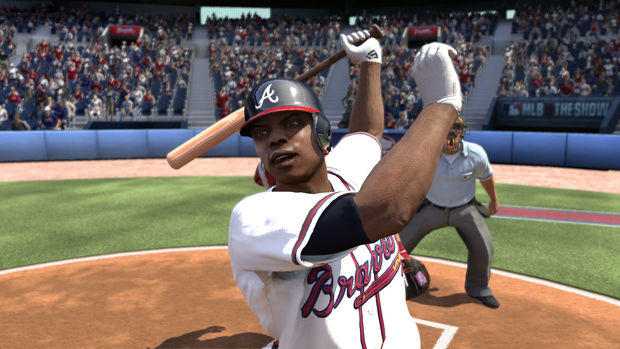 Although this review is for the PS3 version, I was able to test out the Vita build. There was some weirdness at first with the Vita that cleared up after release. Mainly a bad framerate. But it hasn’t happened since. There is still some other mild, weirdness. Balls and strikes count being reversed in the pitching menu during games. Tim Hudson (the Giants’ third starter) being designated their closing pitcher. Late during one game, every player model started wearing that runny-mascara-down-the-cheeks-after-an-evening-of-crying eye black, including the opposing pitcher, which was weird.

And the pitch timing feels off. It might just be me, but I’m struggling with keeping that pulsating circle small this time around. Otherwise, the attempts towards parity are great, and the pared down presentation aspects make for quick ball, which is when The Show is at it’s best. Maybe a better option than the PS3 version for now if you’re planning to nab the PS4 one anyway, though it’s missing online modes.

Hitting in front of the next big thing (the PS4 version) benefited the The Show on PS3 and Vita. In getting the new version game ready, the PS3 and Vita versions have seen some worthwhile updates. Having an account system and franchise carry-over feels necessary at this point. The up tempo Quick Count and Player Lock both speed up the game and add tension with situational play, like your one at bat with runners in scoring position. If you keep the new default dynamic camera view (basically third-person fielding), it just adds to feeling like you’re stepping in your teams’ cleats.

Filed under... #MLB 14 The Show#PSVita#Top Stories