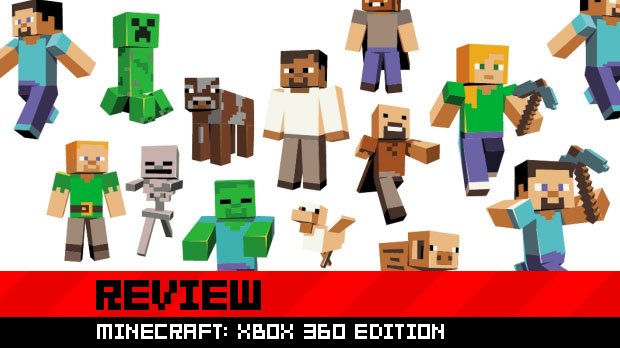 Minecraft‘s success simply cannot be denied, whether you’re one of its many loyal fans or highly vocal detractors. The blocky world and lack of objectives may be deceptively simple, but its honest freedom, as well as hidden depths both literal and figurative, has earned a cult following that is easily understood.

After vacuuming the lives of PC and mobile gamers around the world, Minecraft is finally coming to consoles with Minecraft: Xbox 360 Edition. Not only does it face the challenge of providing the same experience as it does on computers, it also has to convince the console audience that its sandbox world is worth the considerable amount of time it demands.

It’s going to be interesting finding out what 360 users on the whole make of it. This particular one has some mixed feelings. 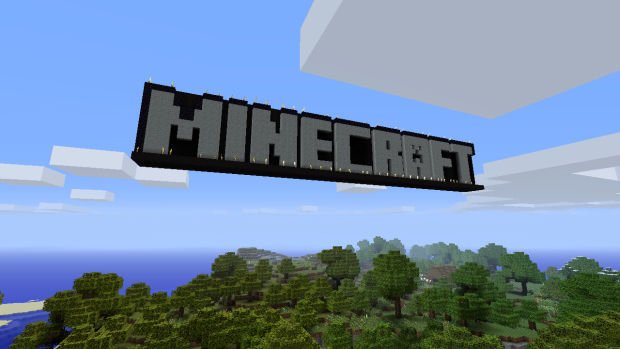 For those not in the know, Minecraft is essentially an open world of building blocks, where the player is free to do whatever they wish — within the limitations of the cuboid world’s physical rules, of course. Aided by tools, crafting tables, and furnaces — all of which must be built and rebuilt — the player’s only job is to make their own entertainment in a randomly generated sandbox world.

Everything in that world has a use, or multiple uses, and players will come to learn them as they play. Punching a tree, for example, produces blocks of wood, which can be taken to a crafting table and turned into wooden planks for buildings, stairs, or sticks. Sticks can be combined with other items to create new objects, working with coal to create torches, or cotton to produce beds. Different materials are stripped from the environment and exploited to fuel whatever the player would like to fashion. Be it a humble woodshed, an expansive fortress, or even an entire town, whatever can be imagined can be built, provided one is willing to invest the time and find the resources.

Despite the game’s frankly ugly appearance, there’s an impressive sense of atmosphere with some lovely musical accompaniment, and the world feels strangely alive as angular sheep and cows stroll through pixelated forests and swim in bright blue grids. As artificial and static as everything is, the subtle sense that everything’s breathing helps the player feel far more connected than he or she might first believe. The vastness of the world is truly felt when armed with a pickaxe and digging deep into the earth, discovering subterranean caves filled with precious ores, gold, and less savory things besides. 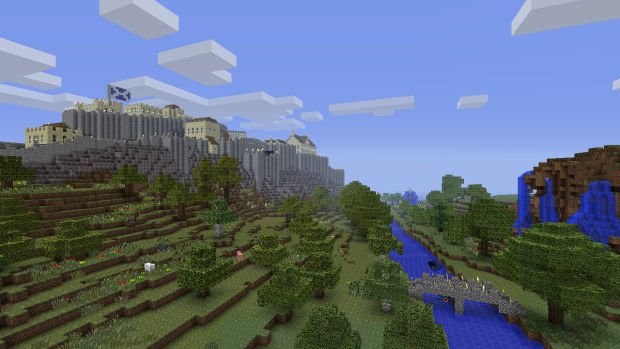 Although it’s predominantly a game about building, Minecraft is something of a survival horror on the side. The first thing most players will do is build a quick and dirty habitat, complete with a door and a bed, for at night the monsters come crawling from underground to wreak havoc. Zombies, skeletal archers, and spiders roam the surface, and any player caught outside risks mutilation. Enclosed buildings with shut doors keep them out, light sources reduce their desire to come near, and most of them will burn to death in the morning sun. Thus it is that most players learn to spend their days working and their nights sleeping in secure shelter.

Daytime isn’t completely safe, however. Zombies and skeletons can hide in the shade to catch unwary players, while the sinister Creepers fear no light and love to sneak behind the player before hissing and exploding in a sacrificial attempt to ruin your day. Players who dig too deeply may also find themselves overrun by legions of underground beasts that have made their homes in the many preexisting caves. Should a player die, they respawn in the last bed they slept in, but will have to return to the scene of the crime if they want to regain any of the equipment they were carrying.

It is up to you what you make of yourself in the world. Some will enjoy abiding by the laws of nature, crafting by day and sleeping by night. Some will build grand fortresses, while others may use the animals and plants to create their own working farms. Yet others will instead use their resources to craft bows, swords, and armor before actively taking on the monsters in defiant adventure. After all, everything has its use, and even the deadliest of creatures may yield useful supplies once slain. 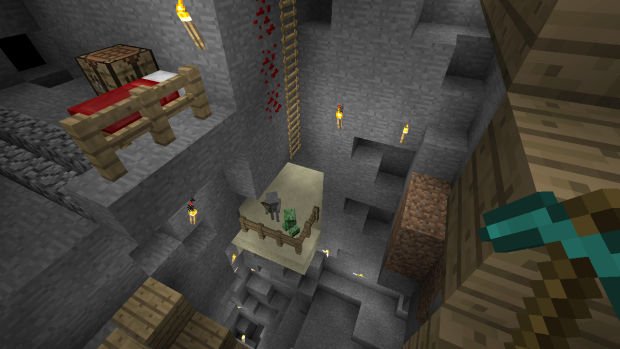 One of the most enjoyable aspects of Minecraft is in discovering the things that you’re not told directly. What if I give this wolf a bone? What else can I use a fishing rod for? What can I do with this magma spewing out of the wall? While unimaginative players may be wondering what the point of the game is, those with curious minds and big visions will have plenty to do and an expansive playpen in which to do it.

While it’s incredibly engrossing and more than a little addictive, Minecraft‘s slow pace and excessive time encroachment can be something of a hassle. Any plans beyond building a small shed and killing things requires a large investment of time, as well as regularly wasted energy. One can spend hours digging underground to grab just enough materials to finish certain creations, and mining often involves huge amounts of doing very little but the same mindless chores over and over again. Getting to the gold, diamonds, and redstone requires vast sessions of simply holding down a button over successive grey blocks, getting deeper and deeper into grey caves full of more grey blocks to brainlessly mine. Walking through the world is slow and tedious, a problem offset by the ability to build minecarts — which themselves will require lots of tedious mining and walking in order to craft.

Once materials are obtained, one will need to wait around while they’re turned into useful components within furnaces. Even something as simple as getting meat to replenish health involves monotony and waiting, as well as fiddling around in the game’s irritating and disorganized inventory system to get the required items in hand. All this, and one still has to contend with monsters that are fond of an ambush and can easily rob a player of hard-won items should they fall down the wrong hole and find themselves unable to reclaim their gear. 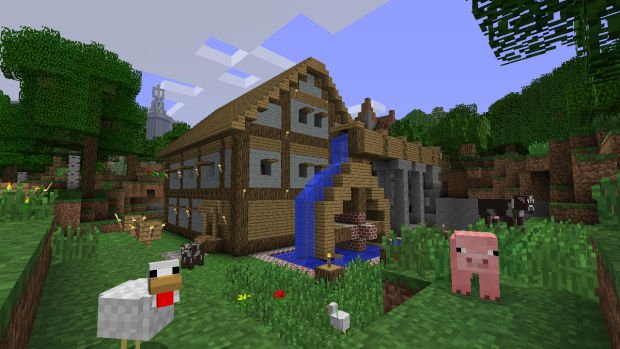 Minecraft requires a ton of patience, and for many players the rewards simply aren’t going to be there. After all, once you’ve built your fortress and filled it with decorations, what then? Build another one? Run around mashing buttons at monsters to kill them for idle sport? Minecraft is only fun for those who make it so, but the fun comes at quite a significant personal expense, and there’s a pervasive feeling that once you’ve finished your own pet projects, you won’t feel the need to keep playing it. While there’s a lot to discover in Minecraft, little of it is worth revisiting and some of it just isn’t worth fighting to see.

All that said, the determined will become ensnared as so many have already, ever eager to find out what lies beneath the ground and what more can be created. For every player who finds the game a pointless waste of time, yet more shall find themselves gladly spending their lives exploring, surviving, and making whatever their imaginations can conjure up. Even after letting the game bore them to death, adventurers can still find a sudden spark of interest that reignites their passion and draws them even deeper, whether it’s a maddening desire to expand one’s home, march resplendent in solid gold armor, or simply maintain the largest wheat farm conceivable. You get out what you put in, provided that you enjoy Minecraft‘s eccentric offerings in the first place.

While the Xbox 360 Edition is largely identical to the original, there are a few alterations. For one thing, mods and many of the updates are missing, though more features are due to be added over time. Right now there are no options for new player skins, and gameplay elements such as hunger are nonexistent. Crafting has been slightly streamlined, with players not having to worry about manually placing components while building objects (simply clicking an item will build it), and a tutorial mode has been included to ease newcomers into the environment. Every new game always begins with a map in the inventory as standard, just to make navigating a little easier. 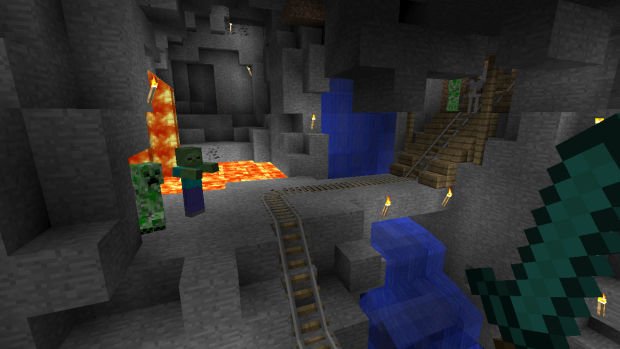 Up to eight players can collude online, and four-player split-screen play is also supported, which can make things a lot more fun for those getting bored. Though Kinect functionality has been previously promised, it is not available at launch. Those hoping to get their motion on will need to wait for future updates.

Meanwhile, the 360 controller works surprisingly well with the game’s keyboard-and-mouse-friendly gameplay. While navigating the inventory is a real bitch, moving through the world and fighting enemies is rather fluid and satisfactory. The game has been tailored very nicely to the controller, and while those more used to mouse controls might find the input somewhat inelegant, most 360 users should have an easy time exploring and building. 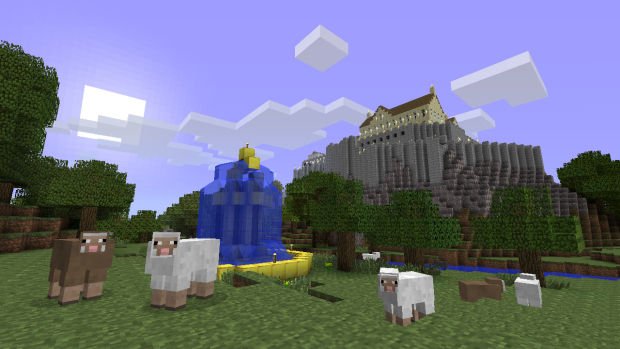 Minecraft: Xbox 360 Edition was my first foray into Mojang’s success story, giving me the chance to review this product as a game more than a port. Having already wasted more of my time than is sensible in Minecraft‘s strange little universe, I can see what all the fuss is about. I can also, however, see plenty of things to question and have been exasperated almost as much as I’ve been inspired. Minecraft is not a game I personally foresee playing a year from now, but should I look back on the hours already invested, I doubt I’ll feel cheated. Indeed, Minecraft is endearing and regularly fascinates for as long as one’s personal mileage can take them.

I don’t regret the engrossing, addictive, and often boring adventure I’ve had. No matter how tired I may be by the end of a day’s excavating, stone smelting, and undead slaying, I can say that, overall, it was worth the effort. Just about.