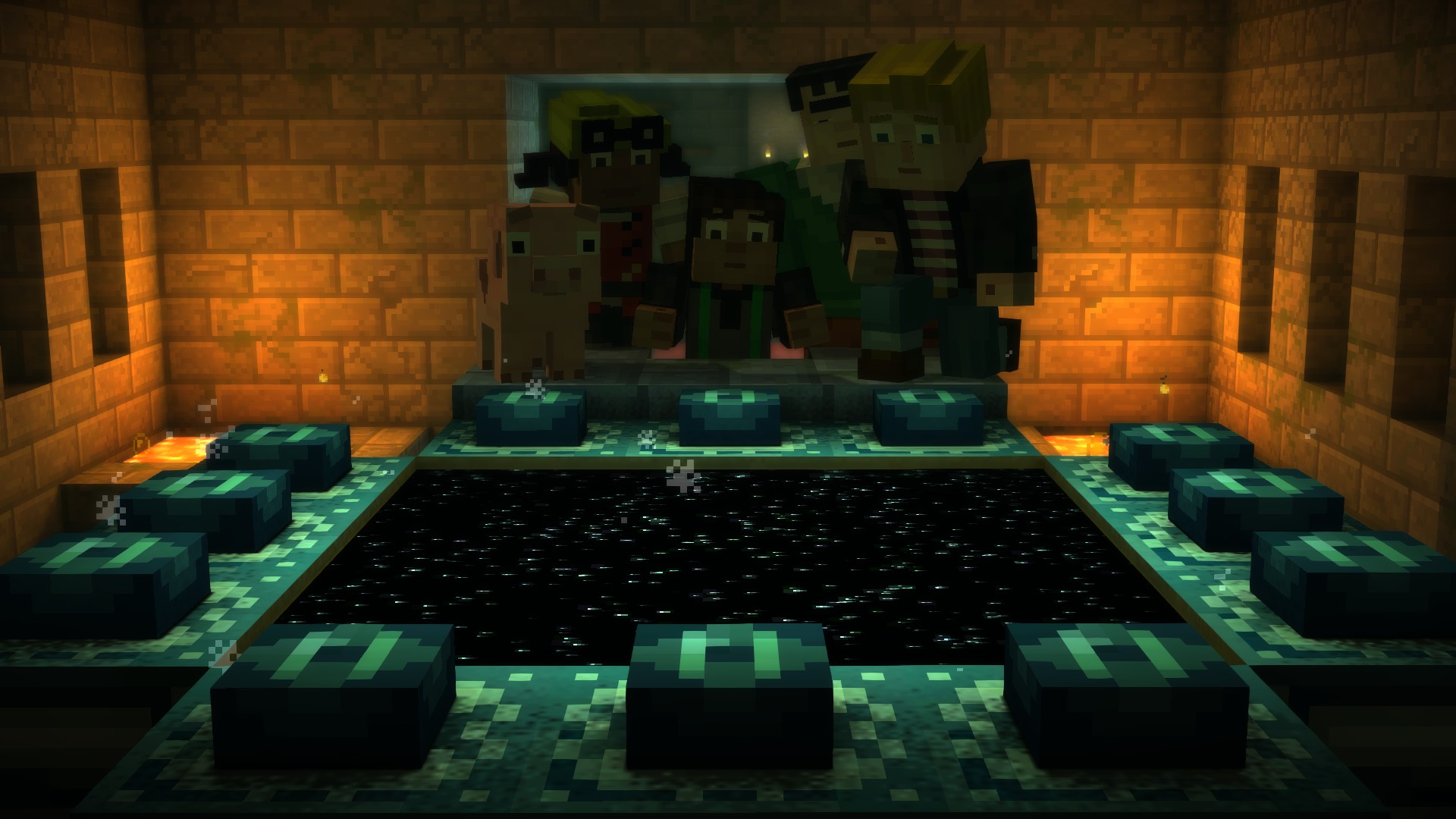 Minecraft: Story Mode didn’t impress me with its first two episodes. Aimed at young players and Minecraft super fans, its writing didn’t have a whole lot going for it past its Saturday morning cartoon plot and series in-jokes. It has been totally passable in that regard, but never exceptional.

At the end of Assembly Required, it felt as though the story could navigate to more interesting territory. The Last Place You Look delivers on that hope, but still doesn’t compare to Telltale’s best works.

After having found Ellegaard the redstone engineer and Magnus the griefer in the previous episode, the gang needed only to locate Soren the architect for the full original Order of the Stone to be accounted for.

The journey to find Soren takes the party to some peculiar locations, most located in The End. However, since Soren is a master builder, the areas highlighted are more diverse than the typical darkness of The End. Between Soren’s feats of engineering in the overworld and colorful constructions in The End, it’s a nice nod to Minecraft proper players who are known to build some of the craziest things.

Soren himself is a much more likable character than some of the other members of the Order of the Stone. Where Ellegaard and Magnus were basically insufferable (especially after they were brought together), Soren is quirky and at times genuinely funny. Voiced by John Hodgman, he’s neurotic and paranoid, but still fun to be around.

Overall, the quality of the writing has taken a half-step up from the previous two episodes. None of the jokes elicited any sustained belly laughs, but I did let out a few snorts and chuckles along the way. The Last Place You Look started up a running gag where Axel falls on top of Lukas repeatedly, which happens just enough to be comical without getting tired.

Some of the seeds of drama sown in previous episodes have begun to sprout, and while it still maintains the kid-friendly narrative, it’s finally beginning to feel like the events happening matter and Jesse has an important role to play.

The greatest success of The Last Place You Look is that it allows the player to feel accomplished while still moving the narrative along. This is, after all, only the third episode in a five-episode season, so anybody who knows Telltale knows everything won’t be resolved here. But even so, the climax of this episode feels like a high point for the team. Sure, they’re not done with their mission, but they did something, at least.

There’s never really any downtime during this episode either. Though there are a few sections of walking around and talking or searching for clues, they all serve a purpose and generally lead to action sequences.

The first action sequence in particular is probably the best so far in the series, melding the fantastic environments, a sense of danger, and the classic Telltale decision-making into a tight opening credit roll.

One thing that might turn some off is the quiet lowering of the bar for success during the action sequences. Some of the quick-time events seem more demanding here than usual, but I noticed after I flubbed a button press or two, the resulting animation didn’t seem to react accordingly. Perhaps it takes multiple failures in a single section to make a difference. More experimentation is necessary.

As much as I may praise The Last Place You Look, it is with respect to the first two episodes of Minecraft: Story Mode. It definitely is an improvement, but an improvement from mediocrity is just okay.

The comedy is slightly improved, but still doesn’t hold a candle to that of Tales from the Borderlands. The characters are becoming easier to sympathize with, but they aren’t are interesting as those from The Wolf Among Us. The drama is beginning to heat up, but it doesn’t come close to what we saw in The Walking Dead.

Perhaps it’s unfair to compare Minecraft: Story Mode to Telltale’s more adult-oriented series. This is built for a particular demographic, and it seems like it’s really hitting with that audience. The Last Place You Look is more of the same — and slightly better, if anything — so those who have enjoyed the series thus far will be pleased to just keep on trucking.